New Additions to the Bose Family

At an event held at the Atlas showrooms located on 10 Winstedt Road, Bose introduced two new devices to their existing range of audio products - a portable Bluetooth speaker and a pair of active noise canceling earphones. From the looks of it, both products are targeted squarely at the modern, urban consumer. They aren't game changers or anything ground breaking, but they help to extend the options available to consumers. We took a closer look at both audio gadgets:- 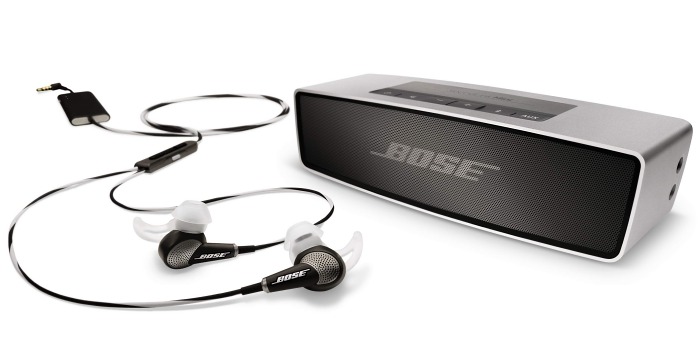 The Bose QuietComfort 15 is considered by many to be one of the best active noise cancellation headphones on the market. Building on their reputation, Bose has now introduced the QuietComfort 20 earphones in to the mix. While the former is targeted at travelers looking for comfort and performance while in the air, the new QuietComfort 20 (QC 20) is targeted at a broader group of people. The earphones weigh 43 grams and its extreme portability is offered with everyday use in mind. 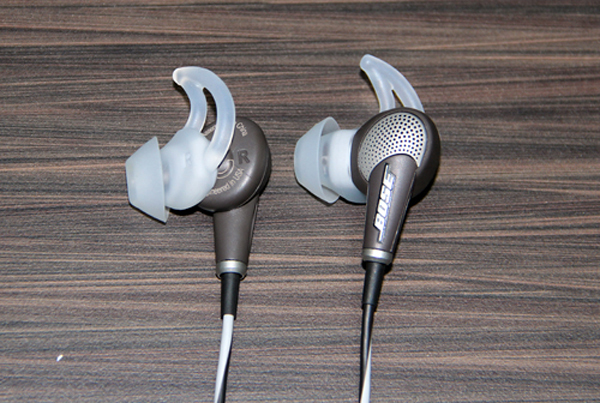 Circumaural design, as found with the QuietComfort 15, provides a good level of noise isolation due to the overall fit. To ensure good noise isolation for their new earphones, Bose has implemented their StayHear ear-tips which can also be found on their SIE2 sports earphones. Within the short duration of testing the QuietComfort 20 at the launch event, we found the its fit to be snug and it was able to block out a high degree of ambient noise.

The QuietComfort 20 features some of the same Bose Noise Reduction technology that can be found on the QuietComfort 15. The earphones are fitted with two microphones to pick up noise signals from the surroundings. Circuitry and algorithms then work hard to produce opposite wave-forms which cancel the noise out. In our brief time with it, the QuietComfort 20 worked like a charm with good noise isolation for the test setup provided at the venue.

As with all active noise canceling products, the QuietComfort 20 needs to be charged and there is a micro-USB port available for this purpose. The battery life of the earphones is stated to be 16 hours. More importantly though, the earphones will continue to function even after the battery is depleted, but minus its active noise canceling capability.

Another related feature for the QuietComfort 20 is "Aware" mode, which can be activated via a button on the control pod at the Y-joint of the wires. While activated, the earphones allow you to hear ambient noise clearly which is picked up via the microphones within the ear-buds. This 'talk through' feature was one that was missing from the QuietComfort 15. While the new QuietComfort 20 falls short of the mark set by the QuietComfort 15, it's fortunately not off by much. After all, the design for both are miles apart (over-ear headphone vs. earphones), but the inclusion of Aware mode definitely gives the new contender an edge in terms of functionality.

The QuietComfort 20 also comes with the proprietary Bose TriPort and Active Equalization technologies for delivering quality audio. The earphones were heavy on impact when tasked with reproducing the hard rocking My God Is The Sun by the Queens Of The Stone Age. They were also able to render the warm, whiskey soaked acoustic guitar tones and fragile falsetto for Skinny Love by Bon Iver.

The Bose QuietComfort 20 is available in stores now for S$499 and comes with a soft carrying case to house the earphones and its accessories:- 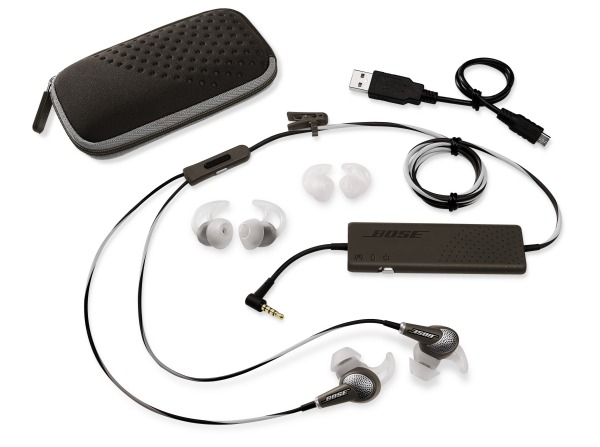 The SoundLink, which was followed up by the SoundLink II, was Bose’s foray into the portable Bluetooth speaker market. While they were credible and powerful speakers, they were also a bit on the chunky and hefty side of things. As more phones and tablets boast slimmer and lighter builds, Bose decided to 'up' the portability factor of their speakers and have introduced the Bose SoundLink Mini. Weighing 680g and measuring in at 50mm x 180mm x 60mm, the new speakers are 30 percent the size and 50 percent the weight of the original SoundLink (which came in at 1.3kg). While it doesn't replace the SoundLink II, the newcomer is aimed at those hoping to get the Bose standard of quality audio in a more compact form. 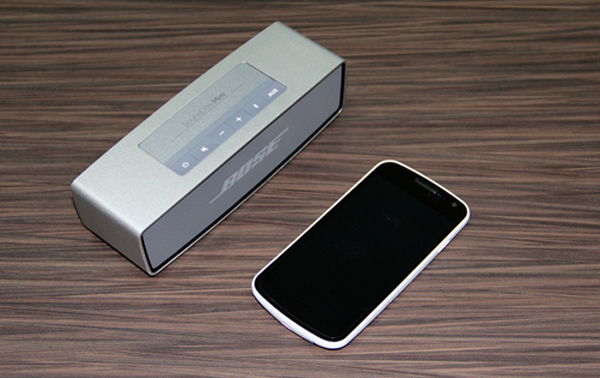 The innards of the SoundLink Mini are similar in configuration to the older SoundLink. The new speakers are equipped with two neodymium transducers and two passive radiators. The passive radiators are arranged in dual opposing orientation to eliminate the problem of hopping or skipping when pumping out bass notes. The waffle enclosure for the passive radiators that was found on the SoundLink however has been omitted. Bose did not give any specific sizes for the audio drivers, but suffice to say they should be smaller than those in the original SoundLink. 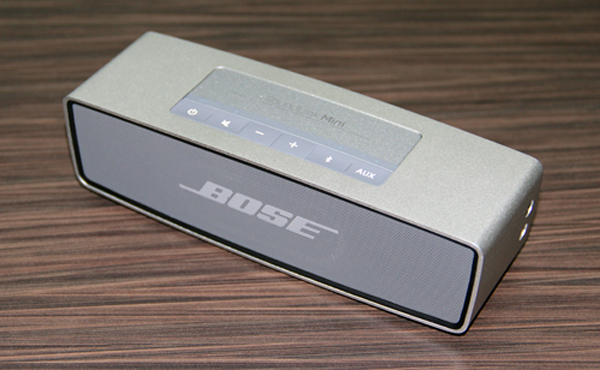 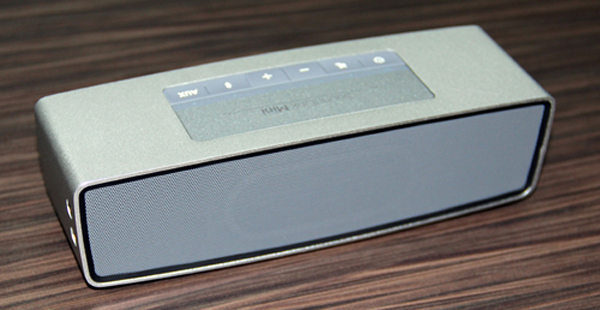 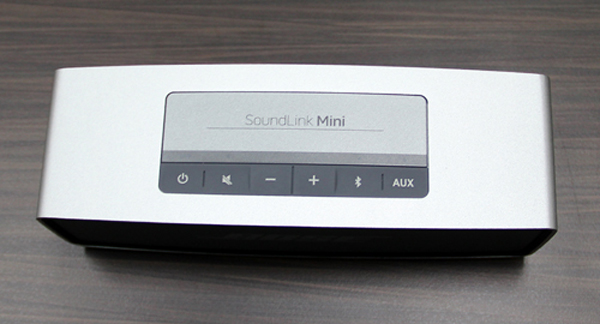 As a portable speaker, the Bose SoundLink Mini comes with a built-in battery which is rated for seven hours of operation. The speakers are charged via a proprietary dock located at its base. A micro-USB port is provided only for the purposes of hooking the device up to a computer for firmware updates. And just in case, a 3.5mm port is also provided for those who would like wired playback.

The Bose SoundLink Mini can connect via Bluetooth to any A2DP enabled device. The speakers can store the last six connected devices in memory for faster pairing, although only one device can be paired for playback at any given time. Oddly, the device isn't able to auto-detect the input source and it must be manually chosen from the buttons provided on the top of the speakers.

For its small stature, the Bose SoundLink Mini delivers decent volume. The passive radiators earn their keep as the low frequencies have good impact and extension. However on Zephyr Song by Red Hot Chili Peppers, we found the trebles to sound somewhat processed. Can the SoundLink Mini deliver the expectations set by its bigger counterpart in a smaller package? For now we'll have to refrain from passing judgment on the speakers with the limited time we had to toy with it at the event. Do look out for our proper assessment in the near future when we've thoroughly tested it in our personal day-to-day usage. 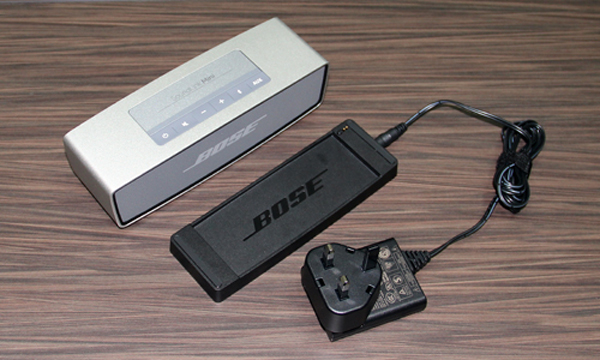 The Bose SoundLink Mini is available now for S$299. You can also buy a soft cover for the speakers for S$39 while a hard cover will retail for S$69.