BlizzConline 2021: Here's a roundup of all the trailers and game announcements

BlizzConline 2021: All the trailers and game announcements 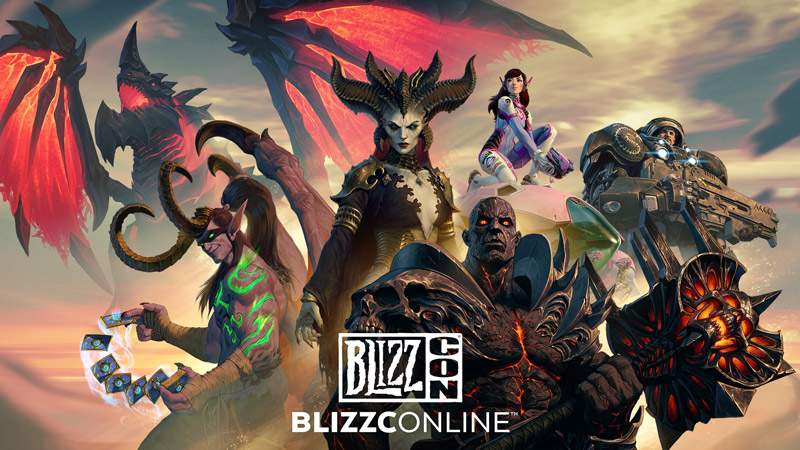 Blizzard Entertainment had a lot to announce during BlizzConline 2021, even if it mostly involved older games and franchises. Diablo fans got three whole games to look forward to, including a remaster of the beloved Diablo II! World of Warcraft: Shadowlands is also getting a new update while World of Warcraft Classic takes us back into a familiar Dark Portal, and Hearthstone is similarly taking it back to basics. We even got a small glimpse of what’s coming in Overwatch 2.

This onslaught of new information and gameplay footage might be difficult to keep up with, but don’t worry - we've got you covered. Here are all the new trailers and game announcements shown off during BlizzCon 2021:

In case you didn’t know, Blizzard Entertainment is fairly old. The 30-year-old game company is re-releasing three of its earliest games - Blackthorne, The Lost Vikings and Rock N Roll Racing - on modern consoles and PCs. Titled the Blizzard Arcade Collection, this thing costs US$19.99 (S$26) and comes with a couple of enhancements for returning players. There’s also a digital museum within this collection, containing extra materials like game art, interviews and cut content. It’s worth noting that the original versions of these games were released back in 2014 on Battle.net for free. You’re paying for the enhancements and extra content, pretty much. Read more about the games here.

World of Warcraft’s new update to the Shadowlands expansion is titled Chains of Domination, and it adds a ton of stuff for players to sink their teeth into. It involves players (and the Covenants) taking the fight to the Jailer, but the trailer above almost solely focuses on Anduin Wrynn. The new update adds a new endgame zone, a raid, a new mega-dungeon and more story content involving Sylvanas’ machinations. We covered the Chains of Domination update in more detail here.

World of Warcraft isn’t done revisiting the past. The back-to-basics World of Warcraft Classic is getting a redone version of 2007’s The Burning Crusade expansion! Players will get to experience the MMORPG’s very first expansion again in its full glory, which adds a new environment in the shattered planet Outland, two races and a bunch of raids. More content will be added over time, and we have the full lowdown here.

Blizzard didn't forget about its famous card battler, either. We got a look at the game's new Forged in the Barrens expansion and Year of the Gryphon content. A new roguelike play mode called Mercenaries was also revealed, giving players more ways to dive into the game. But what if you're tired of all these newfangled game modes and expansions? Whatever happened to good old, simple and uncomplicated Hearthstone? Well, enter Classic Mode, which takes players all the way back to Hearthstone as it originally was, predating all expansions. The buffs? Gone. The nerfs? Also gone. It's World of Warcraft Classic for nostalgic Hearthstone players. Need we say more? Check out our full writeup on all these reveals here.

Classes are a huge part of what makes Diablo games tick, and Blizzard announced Diablo 4’s fourth class today: a hybrid melee/ranged fighter called the Rogue. The Rogue acts as a replacement for Diablo 2’s Assassin and Diablo 3’s Demon Hunter, using weapons like daggers and bows to deal damage from a safe distance. The Rogue is also pretty great at traps, poisons and shadow magic - read our rundown of the character to find out more.

We’re getting a remaster of Diablo 2 and its expansion Lord of Destruction in Diablo 2: Resurrected. This game is being developed by Vicarious Visions (Tony Hawk’s Pro Skater 1 + 2), and aims to be an utterly faithful remaster of arguably the most beloved Diablo game in existence. Diablo 2’s 2D sprites have been given a pretty 3D makeover, displayed at up to 4K resolution - but players can toggle back to the original graphics at the push of a button. All 27 minutes of cutscenes have been remastered, and all seven classes and bosses return. This isn’t a drastic overhaul - it’s the same game you enjoyed with new visuals. Check out more details on Resurrected here.

Alright, so we didn’t get a release date for Overwatch 2. That’s disappointing, and probably means that the game is still ages away from release, but we did get a meaty behind-the-scenes look at development at least. The video above shows off some of the new stuff players can expect - including the Canadian hero Sojourn, who wields a weapon new to Overwatch’s current roster: the railgun. We got a glimpse of several new maps in New York City and Rome, character redesigns for heroes like McCree, Reaper, Pharah and Widowmaker, potential gameplay changes and new weather systems.

The PvP side of things isn’t going untouched either. The Overwatch team is looking at the sequel as a way to further evolve their first-person shooter gameplay with new mechanics for Tanks and a revamped shooting ‘feel’, which includes overhauled audio and visuals. Check out more details here.