Black Widow Review: The return of MCU movies in cinemas

Black Widow Review: The return of MCU movies in cinemas 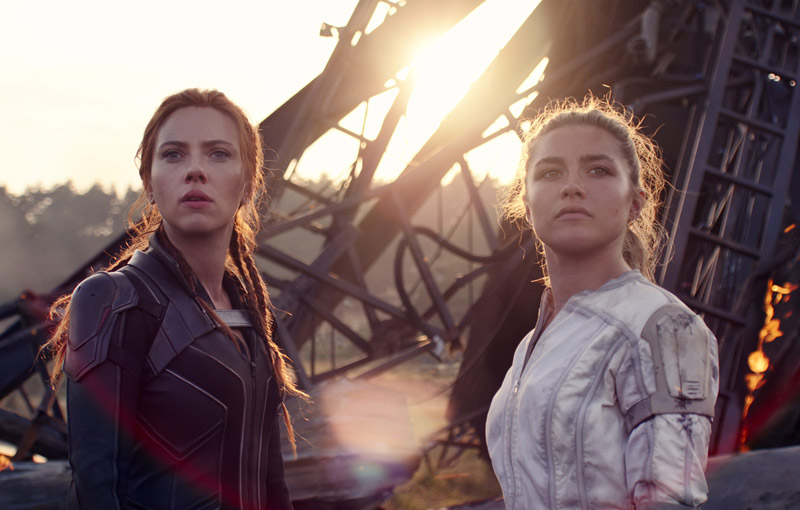 Natasha Romanoff has always been one of the Marvel Cinematic Universe’s most interesting characters. Superheroes are typically born out of trauma in this world, but she spent much of her life as a spy inflicting it on others instead. After leaving all this brutality behind and seeking redemption via the Avengers, it felt like she was finally reaching a point of stability. She had found a family in that team, and was moving past all that red in her ledger. And then…she died.

Black Widow seemed like the perfect opportunity to deliver a standalone story dissecting one of the MCU's most layered characters, but it sadly drops the ball. Besides the introduction of several new characters sure to pop up in a Disney+ series at some point, this is one of the most inconsequential Marvel movies I’ve seen yet. It doesn't offer any new insight on Natasha and her post-Civil War psyche - in fact, it bizarrely sidelines her to develop the new cast. Granted, the new characters are mostly great and some of the movie’s few saving graces - but this was not the big return to theaters I was hoping for from the MCU.

There’s red in her ledger 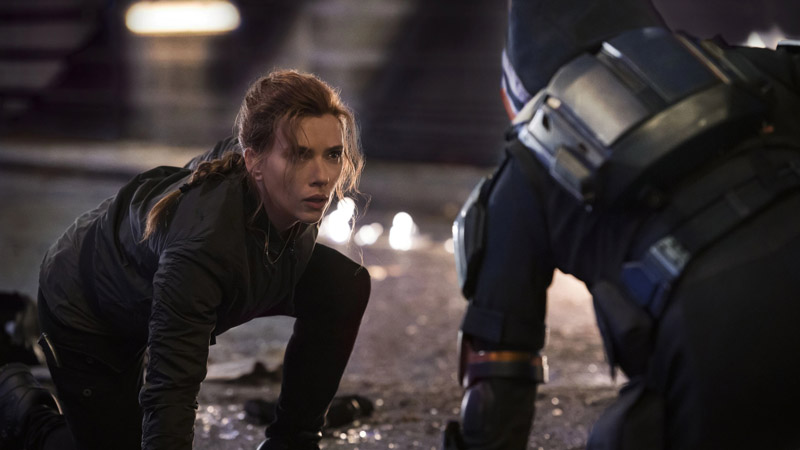 Black Widow opens up with a lot of promise. The story begins with a flashback to Natasha’s childhood during the Cold War, where we’re introduced to her false family - her sister Yelena and parents Alexei and Melina. The tone here is straight out of an episode of The Americans, as the four Russian sleeper agents pose as an American family in the suburbs - but soon find their cover blown. This was an effective way to introduce us to the movie’s main cast and their shared history - but it also set up their future grievances with one another.

Natasha always knew their paradise in suburbia was going to end, but not quite so violently. Alexei despised being stuck in this happy domesticity while Melina genuinely cared for her not-quite daughters, despite her responsibilities pulling her elsewhere. Yelena meanwhile, was young enough to fully buy into their made family. It feels genuinely heart wrenching to watch her be torn from that life, but it’s compelling - and fits right into the dark thriller vibe I was hoping this movie would shoot for.

I’d love to say that set the tone for the next two hours, but it sadly isn’t the case. The second we jump forward to the post-Captain America: Civil War era, Black Widow falls into all the same traps most Marvel movies are endlessly derided for. Does it have a shallow villain? Check. Does its characters constantly make jokes that don’t always land, at the most inopportune moments? Check. Does it have an unnecessarily high-stakes CG-fest of a finale? Check. I adore MCU films and superhero films in general, and I’m more than willing to forgive many of their faults, but this felt like a step backwards.

The world of Black Widow, with its Russian conspiracies and shadowy Red Room isn’t set up to be interesting enough for an entire movie to be based around. At least Doctor Strange brought magic to the table, but this movie has nothing new to offer. It feels stale.

Flight of the Widows 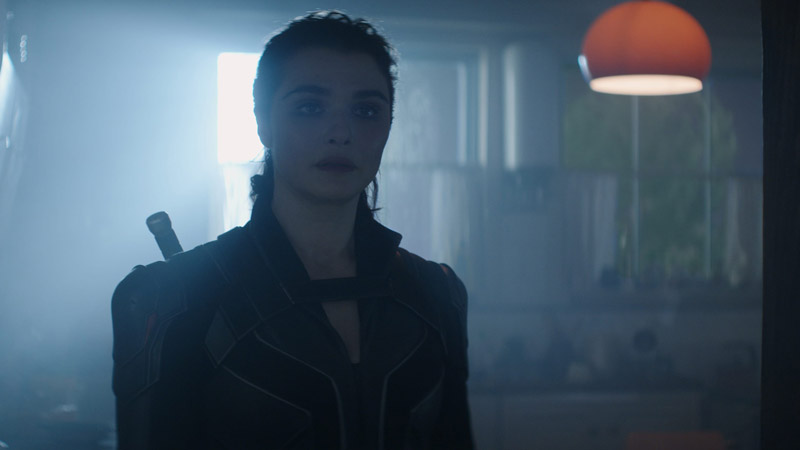 In case you’d forgotten, Natasha ended up being a fugitive from justice at the end of Civil War, after a last-minute change of heart led her to help Steve and Bucky escape during an airport kerfuffle. The movie begins with Natasha on her own, fleeing the U.S. government’s constant pursuit by heading back to Budapest. Despite her attempts to lay low however, Yelena resurfaces and ropes her into a dark plot revolving around the resurrection of the Red Room - a place where ‘Black Widow’ assassins like Natasha were trained and sent out as spies.

As Natasha traces the new Red Room back to its origins, she ends up reuniting with her old family, consisting of a much older Alexei and Melina and Natasha’s faux younger sister Yelena. The resulting family dynamic that plays out between these characters practically saves the movie. Alexei remains wistful of his days as the Red Guardian, Russia’s Super Soldier version of Captain America. Melina still works for the Red Room, which makes Natasha testy to say the least. Yelena and Natasha have a fun sisterly relationship, with the former gleeful that her childhood family is back together - as if those decades spent apart had never even happened.

It helps that Black Widow has an extraordinary cast. Scarlett Johansson is great as Natasha as always, but her character just isn’t given much to work with here. Besides the occasional fight scene and motivational pep talk, she doesn’t have a real arc - she’s just going along with all the events that unfold while Yelena incites them. By comparison, Florence Pugh as Yelena feels like Marvel’s next breakout character, sharing enough of Natasha's skillset to comfortably fill her shoes going forward. Natasha always felt like a character who grappled with her inner darkness and hid that with humour and aloofness. Yelena has plenty of heart but lacks that maturity, and that gives her room to grow.

It’s nice to see David Harbour in something outside of Stranger Things that actually lets him show off some range, and Alexei certainly does that much. Alexei and Melina are the brawns and the brains of the family respectively, and Rachel Weisz brings a thoughtfulness to the role that sets her apart from the rest of the cast. Alexei is a bit of a meathead, but a lovable one and watching him and Melina fall back into old married habits is adorable. The cast is strong when they’re together and Natasha acts as their moral compass. Their family dynamic helps freshen up an otherwise underwhelming plot, if only because it’s like watching one incredibly long and disastrous Thanksgiving dinner set against the backdrop of the MCU.

Taskmaster and Widow, sitting on a bridge, F-I-G-H-T-I-N-G 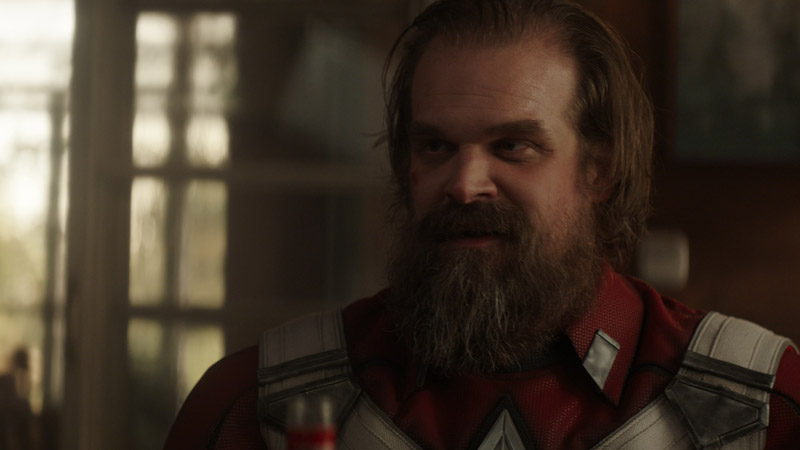 A couple of earlier trailers revealed the MCU debut of Taskmaster, a fairly popular Marvel Comics baddie. He’s a fun villain with a solid gimmick: he can flawlessly mimic his opponents in combat. Unfortunately, the movie absolutely butchers this character, and that doesn’t end with generic costume design. Taskmaster just doesn’t have any personality here, and his new origin story feels way too predictable once you realise where the story is going.

Granted, this might only bother comic fans - but a weak villain is a weak villain. Marvel movies tend to be hit or miss with their bad guys. For every Loki, there is a Malekith. This might be their worst film yet in that regard. Taskmaster plays henchman to the true villain, and the movie does nothing to make him interesting until its final moments. The real big bad hasn’t been revealed just yet, so I don’t want to spoil their identity - but they're one of the MCU’s most bland and forgettable villains yet. Malekith still takes the cake, but Black Widow comes very close to that level of mediocrity.

Plot-wise, this movie is a little messy. The conspiracy it unravels seems hard to follow at first, but then it takes overlong detours into Natasha reassembling her old family and barrels into a ridiculously predictable finale. Something about it really bothered me on my first viewing, and now I’ve figured out what it is - the stakes are weirdly similar to Captain America: the Winter Soldier. A lot of this movie retreads the same ground with its big world-ending threat. It just goes about doing so in a different way, but that doesn’t help it feel fresh. There are ways to do bombastic spy thrillers with exciting stakes - the James Bond and Mission Impossible franchises are a great example of that. Black Widow just can’t match that quality. 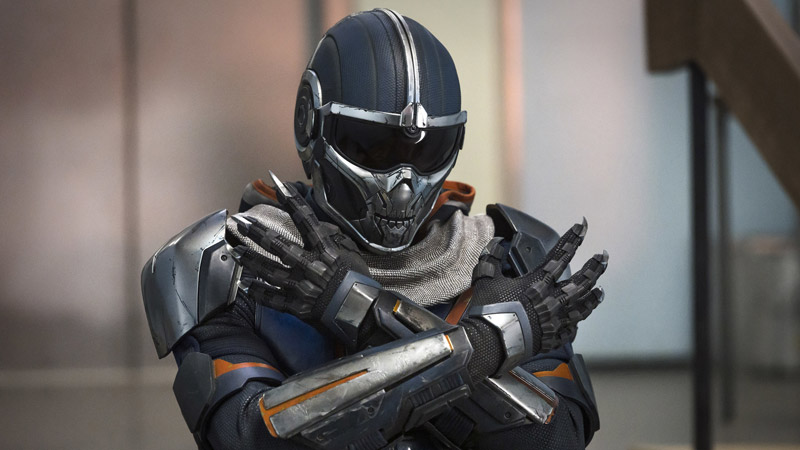 Black Widow is one of Marvel Studios’ weakest movies yet. While it boasts a strong core cast and a clear fan favourite in Florence Pugh’s Yelena, its story feels like an underwhelming superhero twist on the spy thriller genre with an exceptionally weak villain. The movie goes so far as to pull us into one of the most emotionally fraught eras of Natasha's life, but proceeds to do nothing with her. There is no examination of Black Widow’s psyche here, and no deeper understanding of her character to be found. A movie that could’ve added more layers to her tragic death in Avengers: Endgame ends up feeling like a non-essential addition to the MCU.

It’s worth noting that our editor, Aaron Yip, watched this in the cinema after receiving a screener copy, and found that the theatrical experience improved his impression of an otherwise disappointing film. Obviously, you could say this about any blockbuster - they’re all better in a crowded (and vaccinated) theater. If it’s safe for you to do so, we recommend catching this one in cinemas if you’re a big superhero fan. Otherwise, give it a miss and check it out on Disney+ later.

6 post-credit scenes out of 10