Billionaires built these rockets and planes to reach the stars

When you've got a ton of cash, not even the sky is the limit. Billionaires like Elon Musk and Jeff Bezos were part of a generation that grew up reading science fiction, inheriting its sprawling vision of advanced technology and humanity as a space-faring civilization. Now, they've got the money to make it happen, and it's hardly surprising that they're dreaming of building really big rockets and colonizing Mars.

Of course, a lot of it is less far-fetched than it sounds. For starters, their most immediate plans consist mostly of building rockets that will put satellites in orbit and deliver vital cargo to the International Space Station. Part of that is a result of how NASA operates today. The organization's 2020 budget request reveals the intent to rely even more on private companies like SpaceX and Blue Origin, opening the door to lucrative partnerships for these firms.

It's true that Musk has made no secret of his plans to bring the human race to the Red Planet, even laying out details about the proposed rocket and timeline at the International Astronautical Congress in Adelaide in 2017. That said, SpaceX's bread-and-butter still revolves around securing contracts and launching valuable payloads, as it did last week with the Falcon Heavy. It can't ignore the importance of commercial launches, especially since those are exactly what will attract additional customers and further investment, both of which will provide the funds and revenue necessary to forge ahead with its more ambitious goals.

It's not all government contracts and cargo deliveries though. Elsewhere, folks like Richard Branson are looking at something more light-hearted and fun – space tourism. Here's a look at the gargantuan crafts that some of the world's richest people have built. 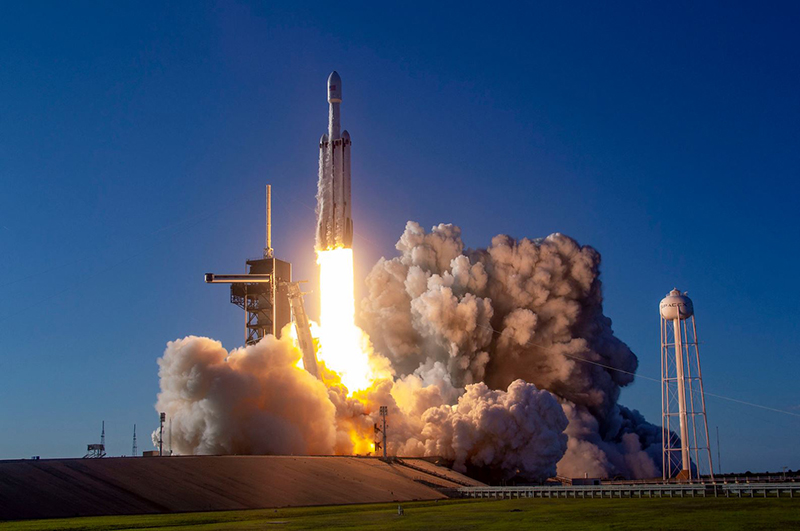 Last week marked the second launch of SpaceX's Falcon Heavy, which has the highest payload capacity of any launch vehicle currently in operation. To date, only the Saturn V moon rocket, which last flew in 1973, has delivered more payload to orbit. While not its maiden flight, the launch was still a huge milestone for the Falcon Heavy because it was its first ever commercial mission.

While the first launch of the Falcon Heavy in February 2018 basically catapulted Musk's cherry red Tesla Roadster and a dummy driver called Starman into a joyride around the sun, the 11 April mission carried precious commercial cargo in the form of the Arabsat-6A telecommunications satellite. The Saudi Arabian satellite will reportedly deliver television, radio, internet, and mobile communications to customers in the Middle East, Africa, and Europe, marking a triumphant mission for SpaceX.

This was also the first time that the company has managed to successfully land all three cores back on Earth. The two side boosters returned to concrete landing pads on land, while the center core touched down on a drone ship, quirkily named Of Course I Still Love You, out in the Atlantic Ocean (unfortunately, it later tipped into the ocean while in transit to the Florida coast, but that's no fault of the landing itself). The first time around, SpaceX failed to stick the landing for the center core.

One of SpaceX's main selling points has been the ability to reuse its Falcon rockets. This helps lower the cost of spaceflight and makes it possible to fly more frequently. Moving forward, SpaceX says that the two side cores that landed will be reused for the next Falcon Heavy launch. Right from the outset, the Falcon Heavy was also designed to carry not just cargo, but also humans into space, potentially opening up the possibility of flying crewed missions to the Moon or Mars.

The first stage is comprised of three cores and 27 Merlin engines in total. Each of the side cores, or boosters, is equivalent to the first stage of the Falcon 9 rocket, so SpaceX is really leveraging on a tried-and-tested design here. Meanwhile, the second stage has just one Merlin engine, again identical to its counterpart in the Falcon 9, which is responsible for sending the payload into orbit once the first-stage separates from the rocket. 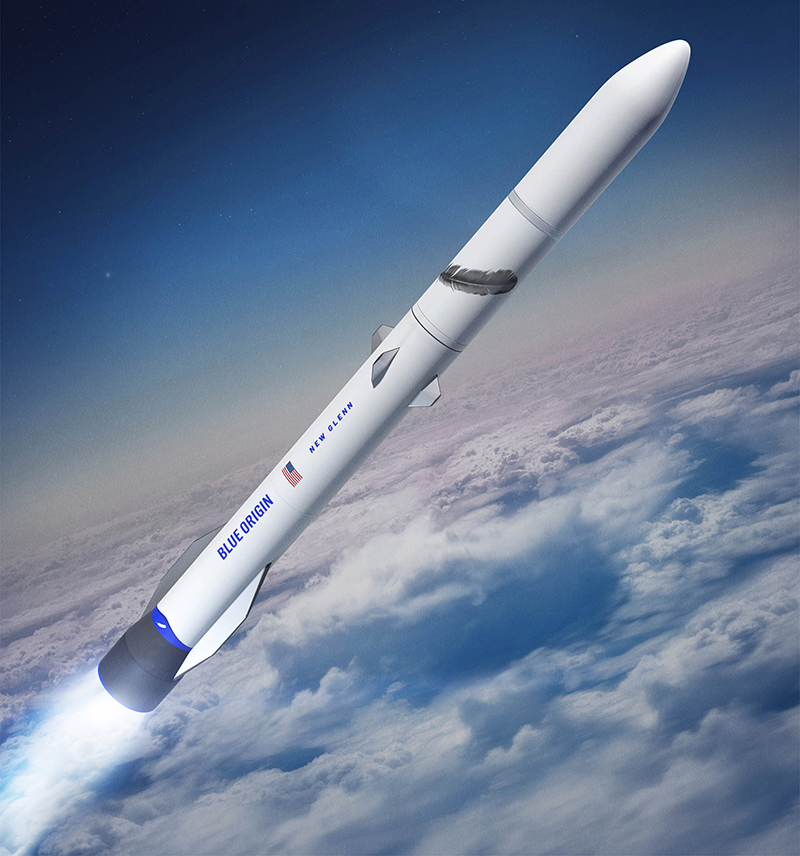 Blue Origin has the might of Amazon CEO Jeff Bezos behind it. Its motto, Gradatim Ferociter, which is Latin for "Step by Step, Ferociously", accurately represents the company's attitude toward space flight. While SpaceX grabs most of the headlines with its successful landings, Blue Origin has generally taken a slower, more measured approach.

Still, the company has secured numerous firsts when it comes to rockets. In fact, Blue Origin actually filed a patent for a reusable rocket booster landing on a platform at sea in 2010, way before SpaceX's first successful landing of the first stage of its Falcon 9 rocket in December 2015. Blue Origin's New Shephard booster also touched down safely a month earlier in November, but that was during a suborbital test. In comparison, the Falcon 9 is an orbital rocket.

The New Glenn is Blue Origin's version of a heavy-lift, orbital launch vehicle. Like the Falcon Heavy, the first-stage boosters are reusable – Blue Origin claims they can be used for at least 25 missions – setting up the two to compete with each other for customers. At the time of writing, New Glenn has secured multiple contracts with customers like OneWeb, Telesat, and Eutelsat.

The first stage is powered by seven reusable BE-4 LOX/LNG engines, while the second stage relies on two BE-3U engines that can be reignited. The BE-4 was designed by Blue Origin itself and is a liquid oxygen and liquefied nitrogen gas engine that is the most powerful US rocket engine developed since Rocketdyne's two-decade-old RS-68 engine, capable of up to 550,000 pounds of thrust.

After the first stage separates from the rocket, it will fly back to Earth and land nearly 1,000km downrange on a moving ship at sea. The second stage then ignites, the fairing – the part of the nose cone that protects the craft as it moves through the atmosphere – separates, and the payload is delivered to orbit. In the meantime, the second stage also makes a re-entry over the ocean, but it is not intended to be reused.