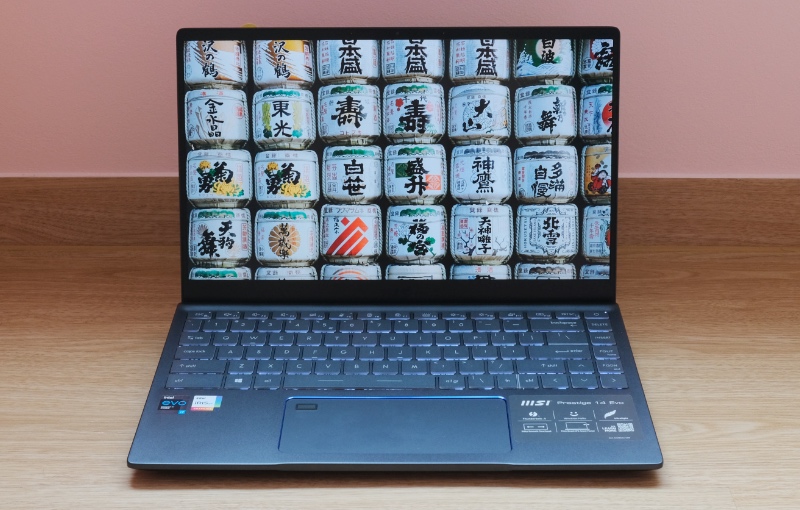 The Prestige series is MSI’s collection of notebooks designed for users who want a compact and portable notebook for business and productivity use cases. The Prestige 14 comes in two variants and the model we are interested in is the Evo – so-called presumably because it is Intel Evo certified.

Available in pure white and carbon grey, the Prestige 14 Evo has all of the ingredients of a modern ultraportable notebook. The 14-inch display has thin bezels to reduce footprint. It’s thin too, at just 15.9mm thick. And it weighs 1.29kg. It may not be the slimmest or lightest, but it fits into notebook sleeves and bags easily and it isn’t too cumbersome to carry around. It also meets the MIL-STD-810G military standard so it’ll resist shock, vibration, humidity, and dust. Despite its claimed ruggedness, the Prestige 14 Evo doesn't feel quite as well put together as its rivals. Crucially, there’s significant flex in the body which is unnerving and disconcerting. 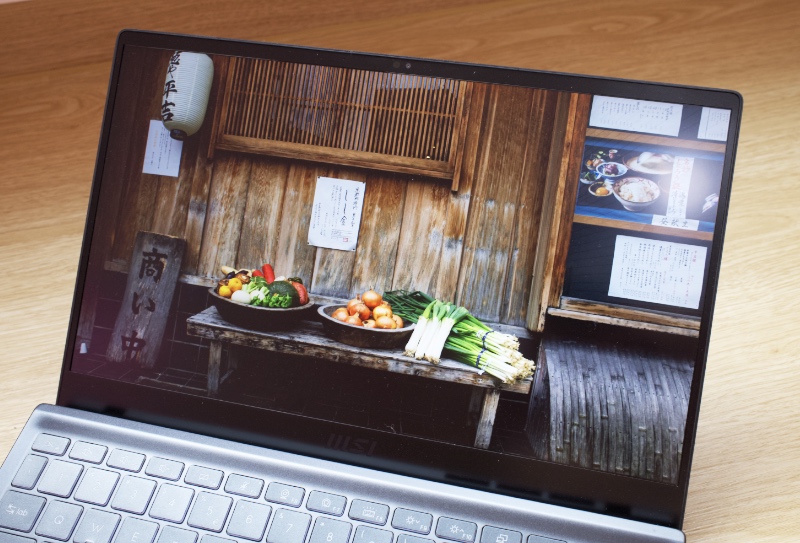 The thin bezels of the 14-inch IPS display give it a screen-to-body ratio of nearly 90%. Despite this, there’s still a Windows Hello webcam above the display. It’s a 720p unit that is serviceable but not great. The display itself is decent but also nothing to shout about. It doesn’t support touch inputs but it supports Full-HD resolution and MSI claims it will display close to 100% of the sRGB colour space. Sharpness and clarity aren’t quite as good as some of its rivals but it does show colours well and it gets bright. It also has a matte finish so it resists glare and reflections quite well. 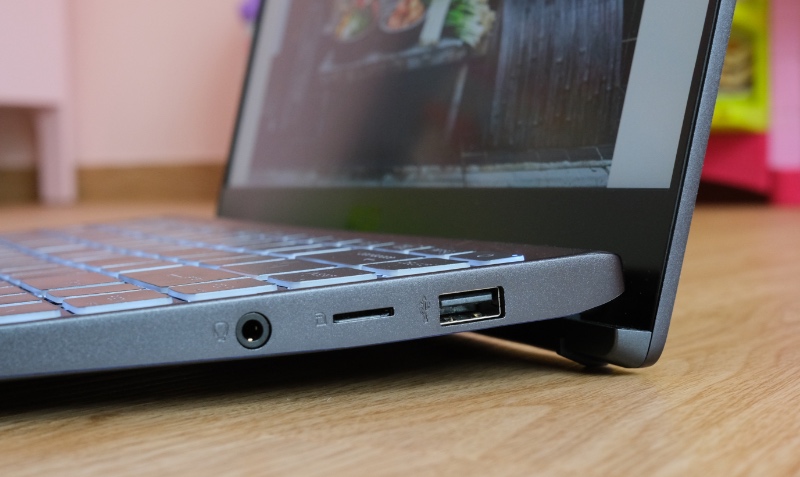 One noteworthy aspect of the Prestige 14 is its specs. It’s the only notebook here to be powered by Intel’s top-of-the-line Tiger Lake processor – the Core i7-1185G7. Compared to the Core i7-1165G7 that most other notebooks use, the Core i7-1185G7 has slightly higher base clock speeds but the number of CPU cores and graphics EUs remain the same. It will be interesting to see if the higher clock speeds will yield any improvements in performance in our tests later.

Here are the key specifications of the Prestige 14 Evo unit:

The notebook will set you back S$2,349. It’s neither the priciest nor the most affordable but at least the specifications are reasonable. 16GB is fast becoming the de facto amount of memory for higher-end ultraportable notebooks and 512GB of storage is a fair amount. 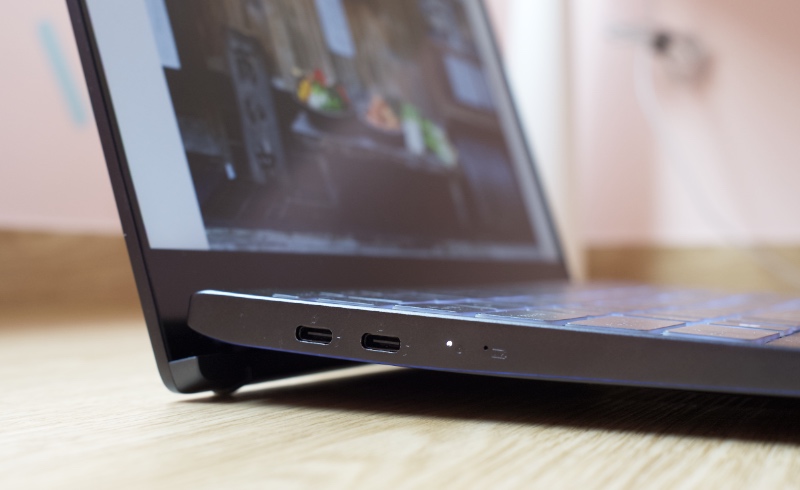 As for ports, the Prestige 14 Evo offers two USB-C Thunderbolt 4 ports, a single USB 2.0 Type-A port, and a microSD card reader. You’ll still need some sort of a hub or adapters if you require HDMI outputs and the ability to read SD cards, but I think it’s a sensible compromise and should be enough for most users. On the wireless front, it supports Wi-Fi 6.

The Prestige 14 Evo has the largest trackpad in its class. It’s not very tall but it’s very wide. Integrated into the trackpad is a fingerprint scanner, which makes it one of the few notebooks to support both fingerprint and facial recognition for Windows Hello. It uses Windows Precision drivers and so the tracking and responsiveness are expectedly good. 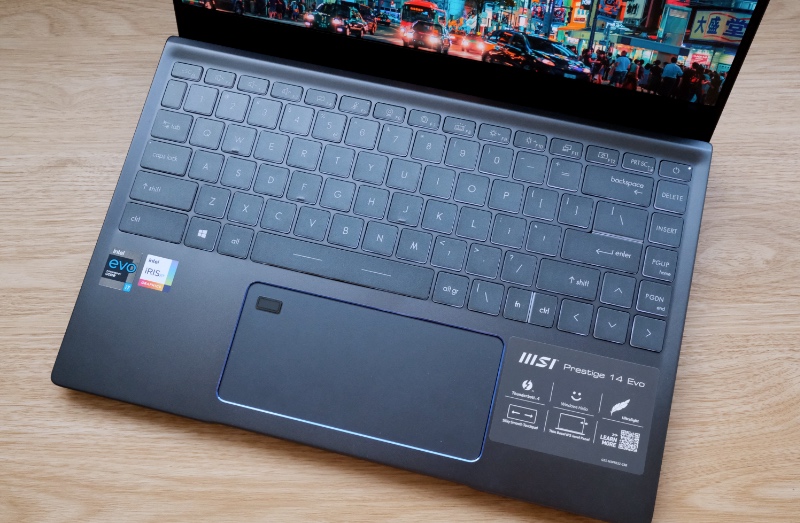 The keyboard layout is a little unconventional in that it has an additional column of navigational keys on the right. That will take some getting used to. Generally speaking, this keyboard is quite pleasant to type on. It has decent travel and I like the amount of resistance and feedback. The keycaps are of a good size and I especially like how the legends are translucent so that the backlights shine through.

The speakers, however, are woeful. They don’t get very loud and they sound terribly thin and hollow. There’s hardly any bass. You’ll definitely need headphones or desktop speakers if you want to enjoy content on it.

The Prestige 14 Evo makes a very good first impression. The specs are good, it has a decent display, a good selection of ports, and a very large trackpad. I can’t wait to see if its faster processor lives up to expectations. More on that in our performance assessment section.