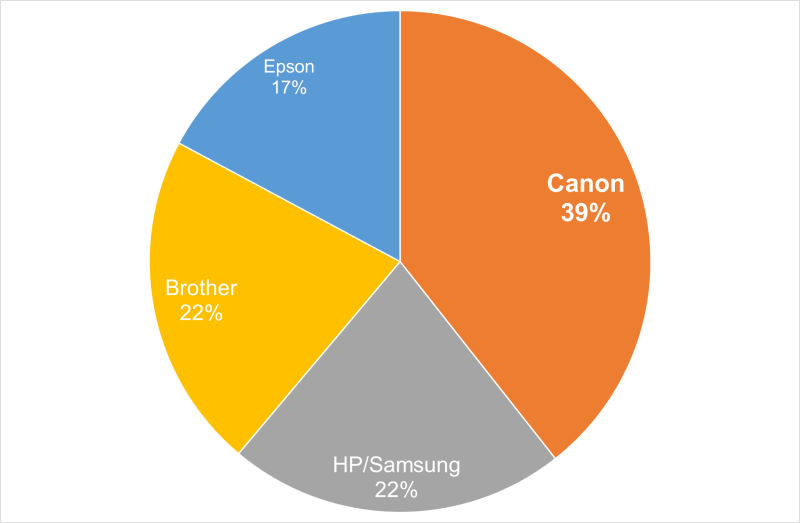 With work from home, and home-based learning being the norm throughout 2020, one would expect the need for personal printers to see a surge in demand. However, the popularity of major players has not changed much and the positioning for our Readers’ Choice Best Home Printer Brand remains the same this year with Canon in the lead spot, capturing 39% of total votes, while HP, Brother, and Epson falling into rank in 2nd, 3rd, and 4th spots. Throughout 2020, Canon continued to release printer updates throughout its range, with a larger focus on ink tank technologies, from the affordable Pixma Ink Efficient G1020 and G3020 to the more heavy-duty SOHO-focused G7070. But that’s not all, Canon has everything in between as well, from laser workgroup printers  (imageCLASS MF746Cx) to professional graphic printers (imagePROGRAF Pro-300) and fun photo printers (Selphy Square QX10). 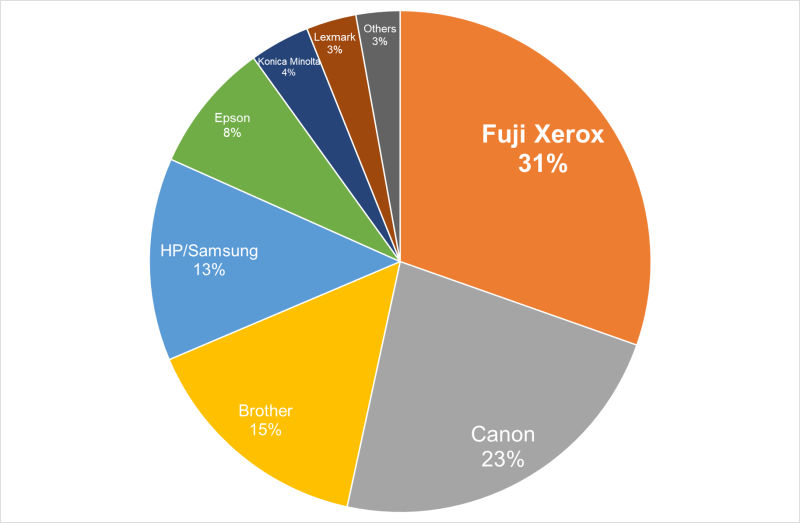 We had to double check our graphs for a moment, because the results from this year’s voting is almost identical to last year, including all the positioning and vote share for each brand. The only difference is that Fuji Xerox took an extra 1% of the votes to win the Best Office Printer Brand category by 31%. You can look at last year’s results here to see for yourself. It’s uncanny. One of the factors we can think of is that this category is entrenched in terms of branding. Businesses do not change printers or printer providers often and most of us would probably only know of the brand that our office uses. Be that as it may, that doesn’t mean printer manufacturers do not need to update their products. Fuji Xerox launched no less than 19 new printer models in 2020, covering both SMB up to enterprise needs with a bigger focus on data security, automated workflows and cloud connectivity. Impressive.

More recently, Fuji Xerox operations have been rebranded under the Fujifilm Business Innovation group. Back before Covid-19 struck,  Fujifilm made its intentions known for full ownership of Fuji Xerox and that it would operate as a wholly owned subsidiary of Fujifilm. With more time and streamlining of operations, the rebrand is a natural progression. So don't be surprised to find  business printer solutions from Fujiflm and the brand marketing their Tech Awards win. 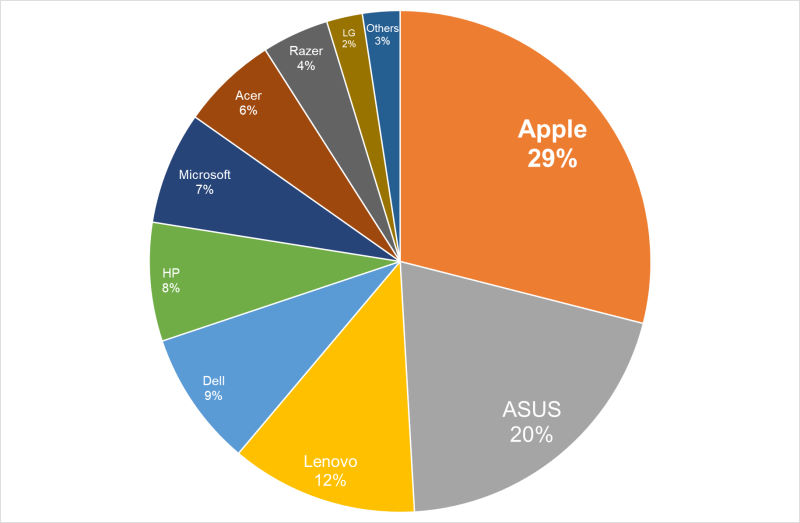 With 29% of the votes, Apple remains the thought leader when it comes to ultraportable notebooks and there’s little doubt that the interest in MacBooks have gotten an even greater boost in 2020 after Apple announced they’ll be parting ways with Intel and making their own chips. Not only that, Apple managed to leapfrogged the industry by developing a 5nm microprocessor at a time when Intel hasn’t been able to transition to 7nm. If our own review of the new MacBook Pro with Apple’s M1 chip is any indication, it is an amazing product. ASUS (20%) and Lenovo (12%) are in second and third place, but what’s interesting this year is that Razer has gotten into the chart, and even eating into LG’s vote share. Besides the Razer Blade Stealth, the company added a new product in 2020 catered towards productivity, the Razer Book 13. 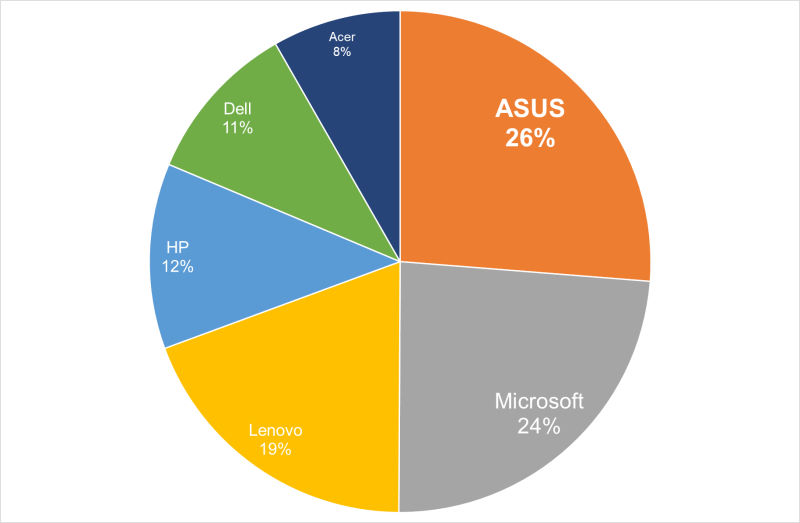 The Best Convertible Notebook Brand award was first introduced in 2018, and since then, little has changed in terms of brand positioning. However, the fight for top spot between ASUS and Microsoft have been quite fierce. The inaugural winner was ASUS with a slim 1% margin. In 2019, Microsoft got 26% of the votes against ASUS’ 24%. In 2020, ASUS took back the award from Microsoft with a slim 1% margin (26% vs 25%). This would be the first time ASUS has retained the award for a second consecutive year. ASUS maintains a range of convertibles in their ZenBook, VivoBook and Chromebook Flip series, but ASUS even has a gaming class convertible in the new ROG Flow X13, a unique combination of a compact 13-inch notebook configurable with an AMD Ryzen 9 5980HS CPU with an external NVIDIA GeForce RTX 3080 eGPU docking unit. 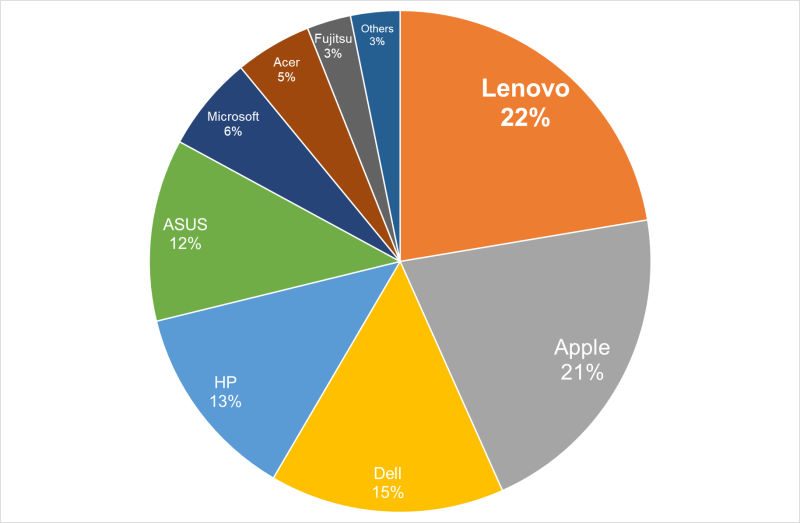 As voted by you, our readers, Lenovo once again beats Apple by a slim margin to win the Best Business Notebook Brand award. Interestingly, Lenovo has managed to hold on to this lead over the past few years, though Apple has been slowly eroding Lenovo’s vote share year-on-year. Now, this is no surprise. No matter how much you want a MacBook, it’s a fact that Lenovo remains the global market leader in both PC shipments and market share according to a recent Q3 2020 Gartner report. Besides the usual annual chipset refreshes, Lenovo has also introduced new products in 2020, namely the ThinkPad X1 Fold and ThinkPad X1 Nano. It has also rebranded its Yoga line-up for a better technological positioning. We were impressed enough with the new Yoga Slim 7i Carbon that it’s our new Editor’s Choice Best Ultraportable Notebook.