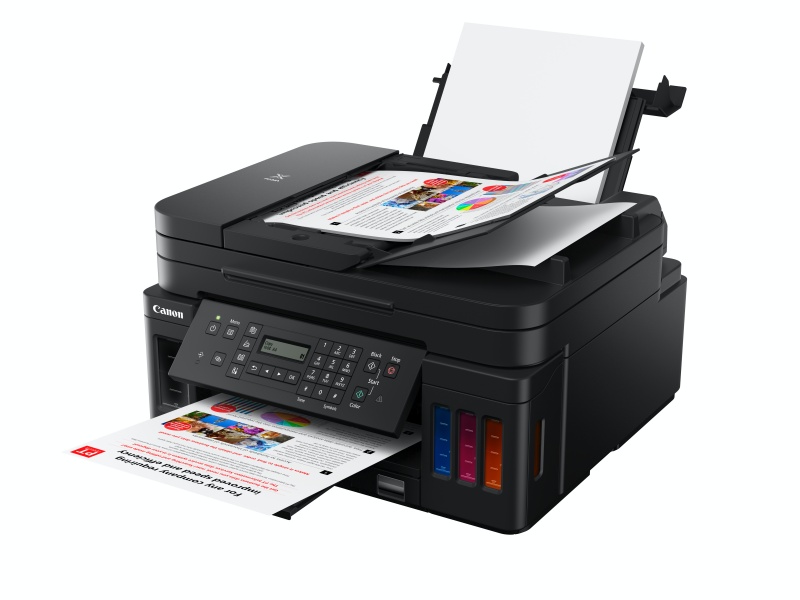 The Canon Pixma G7070 is an all-in-one printer with print, scan, copy, and fax functions.

Falling under Canon's Pixma range, this indicates that it is based on inkjet technology. But what also sets it apart is that it is one of Canon's latest Ink Efficient range of printers, using a refillable ink tank system.

It is easy to see why more manufacturers and users are falling under the spell of refillable ink tank class printers. Being able to physically see the ink level remaining imparts that level of control to the user. For the manufacturer, granted they may see less profit (no longer being able to charge more for complicated ink cartridge replacements), but they can also make their mark in terms of social responsibility for less waste through a simpler ink management system. 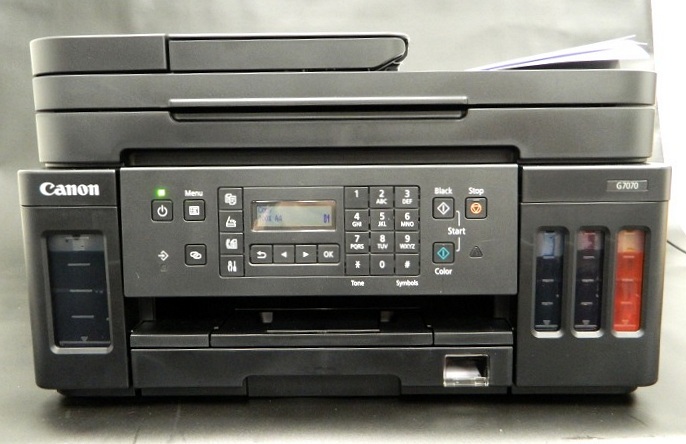 With dimensions of 403 x 369 x 234mm and weighing under 10 kg, the G7070 has a fairly small footprint (as compared to the Brother LED printer option), but still able to handle most print, scan, and copy demands of a SOHO. The only protrusions were the paper trays to hold print outs and these could be kept away when not in use to reduce the space needed for the G7070. 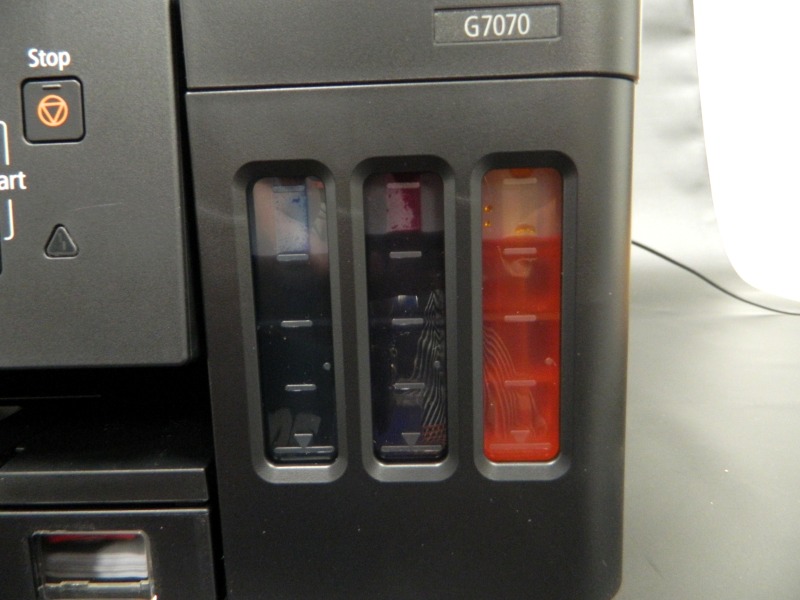 The G7070 has a large 35-sheet automatic document feeder and a two-way paper feed design, which can load up to 350 sheets of paper in total per batch for uninterrupted printing, scanning or copying, up to 8,300 black-and-white documents and up to 7,700 pages in colour from a single ink bottle refill. This makes it the most cost-efficient model tested in terms of running cost - even if the printer's initial cost is the more expensive one of the lot at S$499.

Being able to physically see ink levels made it easy to judge when you needed to buy more. And refilling the ink tanks was also easy.

Besides network printing capabilities, it could print from various mobile devices and supports a host of connectivity options like USB 2.0, Wireless, Wired LAN, Wireless/Wired LAN Pictbridge. Wireless Direct is also present, allowing direct communication and printing from smartphones without the need for a wireless router.

The front panel has all the functions and commands necessary to control everything you need from the G7070.

What we didn’t like however was the dual-line LCD display. It was small displaying only two lines of text, and therefore lacked the functionality of something larger that we've grown accustomed to on some of Canon's older multi-function SOHO printers. Navigating the menus and entering information like Wi-Fi passwords was fiddly and took some time. The buttons arranged around the LCD only used images to depict their function. I don't think using words would have been difficult and would make things a little more easier to understand at a glance; especially for infrequent or guest users. 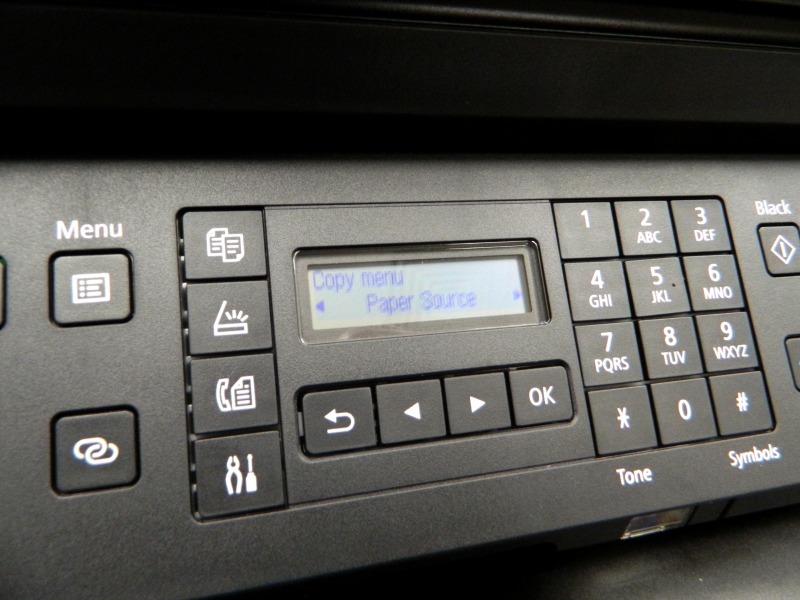 Overall, it has one of the better print quality results of the SOHO printer bunch. Blacks were dark enough and the text was sharp and crisp. Serifs had no bleeding out. There was some sporadic spotting around the letters but this could only be seen under a magnifying glass like so:- 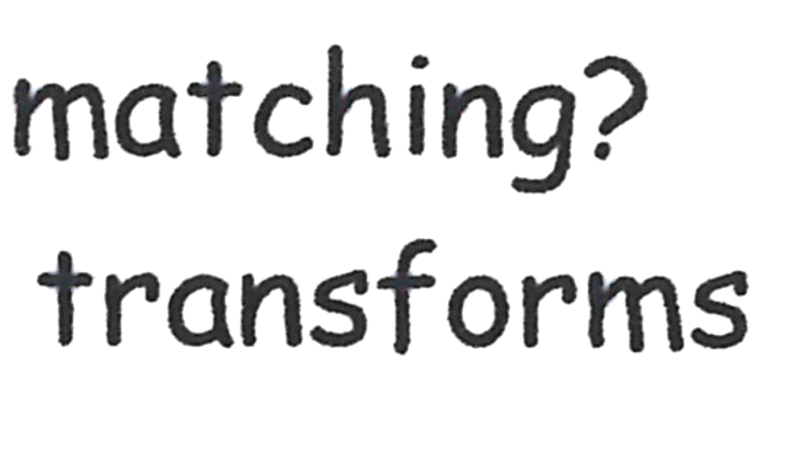 The colours for the image in our PDF document were closest to source but there was a wee bit of colour saturation. When under a magnifying glass, the image wasn't as sharp as we'd like but under the naked eye, you could hardly nitpick. 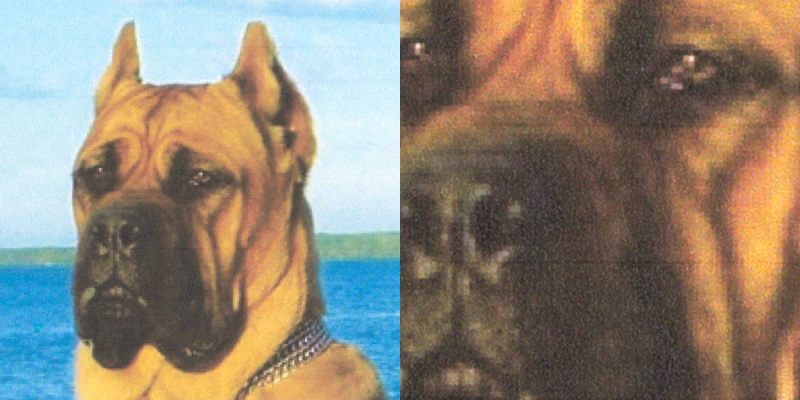 It was, however, the slowest in print speed, taking more than double the time of the other two printers in the test.