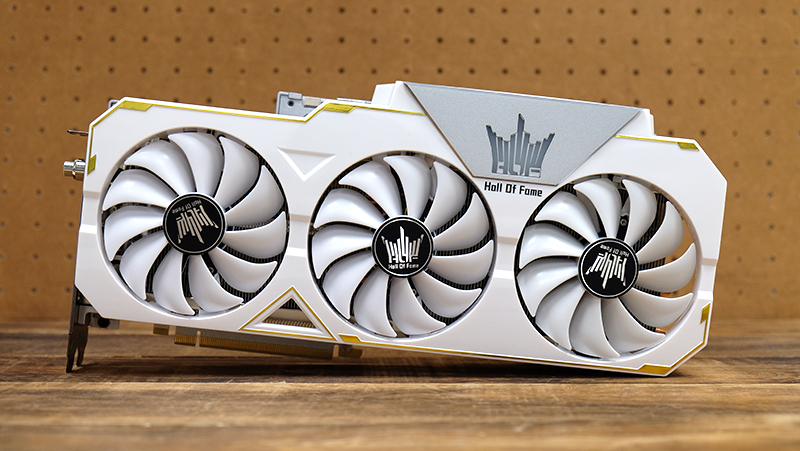 The GALAX GeForce RTX 2080 HOF edition card has such an over-the-top design, it’s almost hilarious. For better or worse, this is probably one of the flashiest custom cards around, and it’s almost definitely designed for those who know that they’ve bought the king of cards and want others to know it too.

I mean this quite literally, because GALAX has made the frame around its LCD screen removable, and you can replace the default option with nothing less than a golden crown. This is bundled together with the card, which also ships with a range of accessories, not all of them necessary. This includes an acrylic bracket to support the GPU in its case and a pair of presumably anti-static gloves. 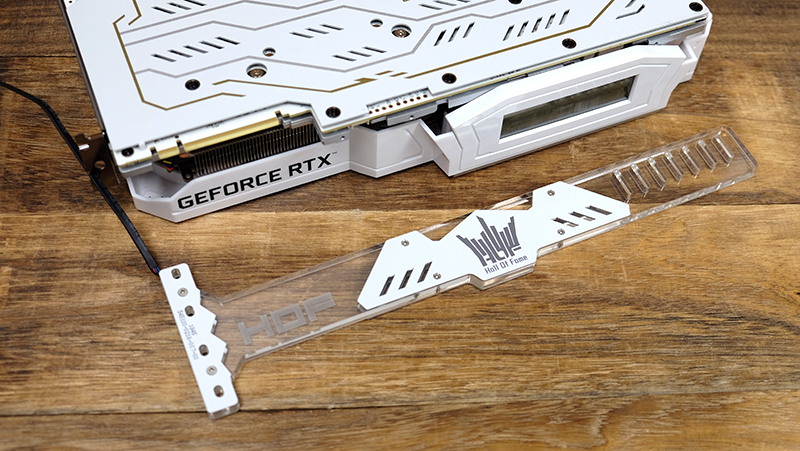 Unfortunately, the crown in question kind of cheapens the entire feel of the card. Furthermore, it’s not so much a problem with the design as the materials and construction. The entire thing just feels like cheap plastic, and the paint work seems like it’s just waiting to chip off. The HOF edition is a premium card, and I don’t think it’s too much to expect its bundled accessories to live up to the same standard. 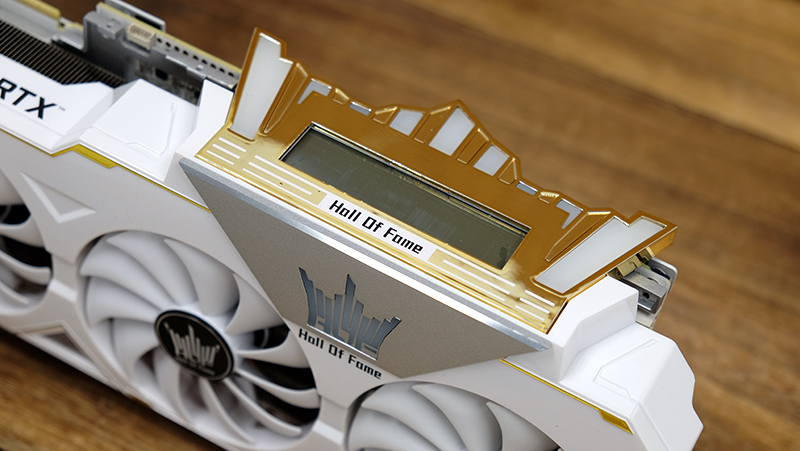 That said, the white ceramic finish on the card is truly striking, and it’ll fit in really nicely with white-themed builds, but probably without the golden crown. Even the PCB is white, and it’s a small touch that goes a long way toward creating a cohesive look and feel. The build quality of the card is good but not amazing, and I couldn’t help but notice certain imperfections on the LCD screen. Nevertheless, the display can show useful information such as temperature, fan speeds, and GPU voltage, so I can definitely see it coming in handy. In addition, you can set it to display custom logos or text using GALAX’s HOF AI software. 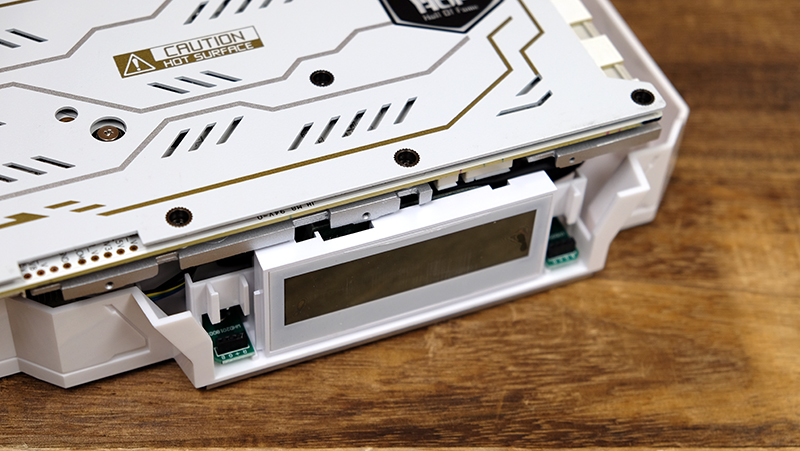 GALAX is also keen to highlight the new features of its AI software. According to the company, the software can now intelligently adjust fan speeds to reduce noise and improve cooling performance. The HOF AI panel has been redesigned, and it now features a cleaner UI and dials that mimic that of a race car dashboard. The card ships in a so-called Intelligent mode by default, and you’ll have options for quiet or performance presets. 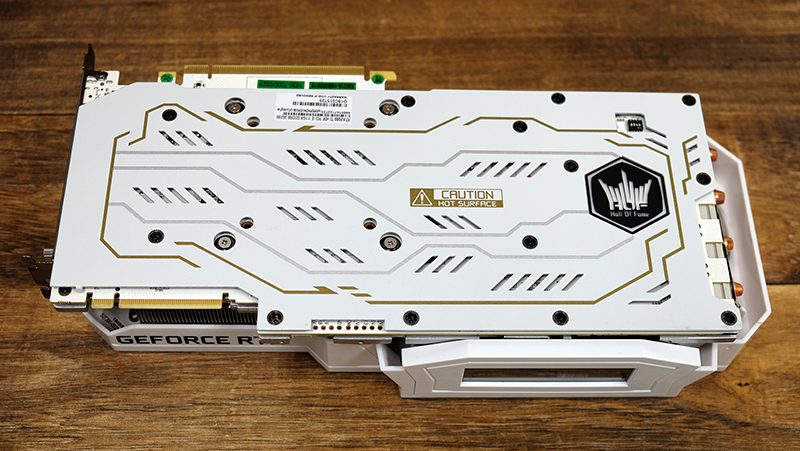 In addition, there is a Temperature Priority mode that lets you define specific low and high temperature points and fan speeds that the AI processor can take cues from. However, this feature will require you to run the HOF AI software in the background, whereas the Intelligent mode does not. What’s interesting is that GALAX says that it’s using a custom processor for these AI functions, and it’s not entirely software-based.

A button at the rear of the card also lets you quickly set the fans to run at full speed, where they kick up quite a din. The only time you’ll want to use this is probably during overclocking, as the fans are really, really noisy when they’re at 100 per cent. Still, the button is useful, and it’s located next to the display outputs where it can be accessed easily without having to open up your case. 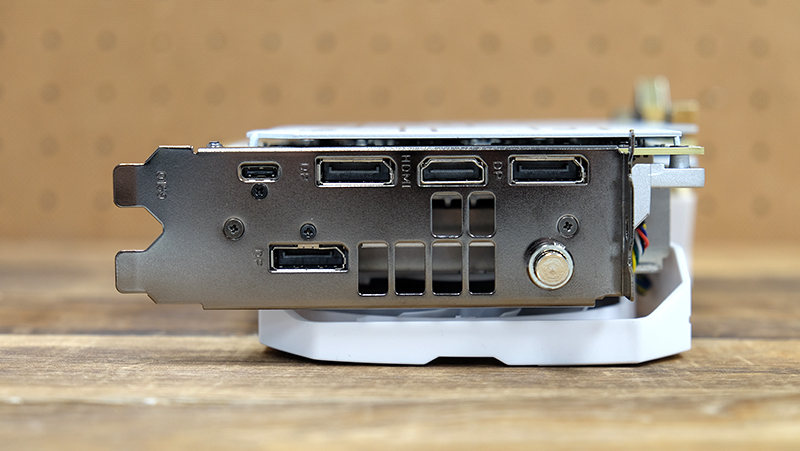 The card uses a 16+3-phase digital power supply to better support overclocking, the same as the ASUS card. The PCB is sandwiched between a metal frame and the backplate, which should help reinforce it and guard against flexing. The massive fin array is paired with six heatpipes and a copper contact plate to help channel heat away from the GPU. 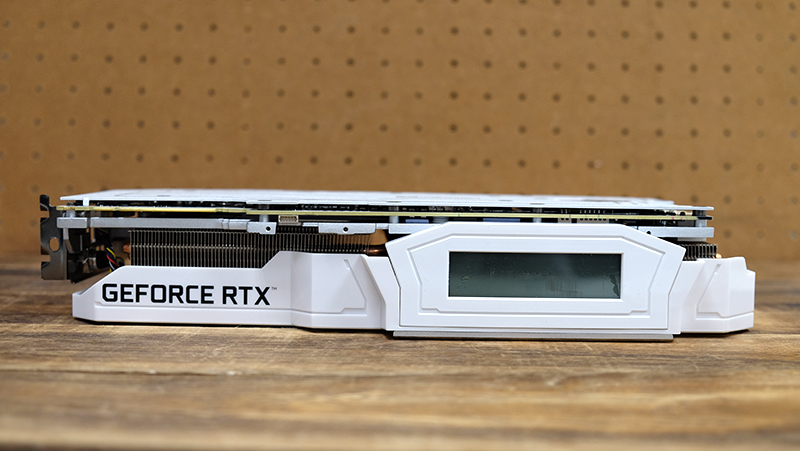 The HOF card also features no fewer than three 8-pin power connectors. This is nearly bordering on overkill, but it’ll definitely ensure that your card gets enough power when you’re pushing it really hard. Strangely enough, however, it doesn't ship with any factory overclock at all, featuring a 1,350MHz base clock and 1,635MHz boost clock. 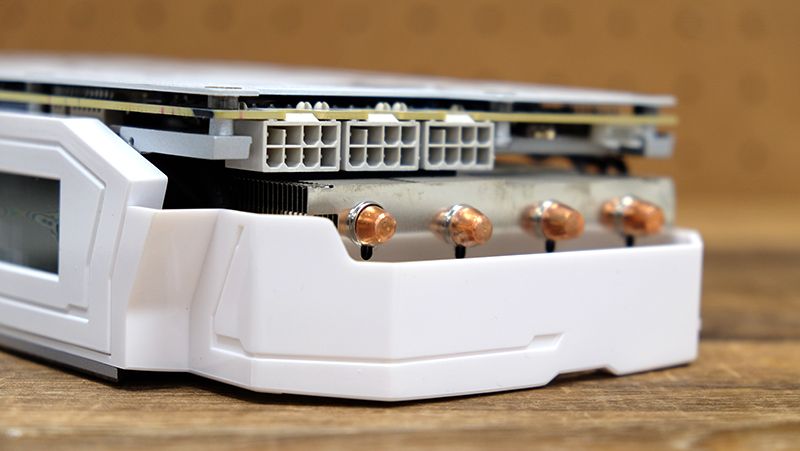 Finally, the card is outfitted with the same selection of display outputs as the Founders Edition model, comprising three DisplayPorts, one HDMI, and one USB-C port.