Unlike the previous two years, smartwatches in 2020 took on a role of refinement. With the exception of the Fitbit Sense, all the smartwatches we tested feature only minor--though tangible--improvements over their predecessors. The Apple Watch Series 6 for example, is basically a snappier Apple Watch, and that's to be expected with a new processor. But in terms of features and usability, it's not really that much different from last year's Series 5, or in fact the Series 4 from two years ago.

You'd also notice that Garmin isn't even in the lineup this year, because they haven't really updated either the Fenix or the Venu in 2020. Again, there were some alternative options, such as the Venu Square, but it wasn't exactly an upgrade to the original, more of a new design choice for someone wanting a square watch.

The only outlier was the Fitbit Sense, because it was the only smartwatch to feature brand new technology. The Oppo Watch also sees Wear OS devices re-entering our radar, and we expect to see much more in the future because towards the end of 2020 saw an explosion of brands entering the smartwatch and health tracking market. Perhaps this is a ripple effect from Covid-19, where home workouts and fitness have become one of the few activities for a globally stuck-at-home society. Anyway, this will probably be a much more expansive and interesting category going into 2022.

And the winners are... 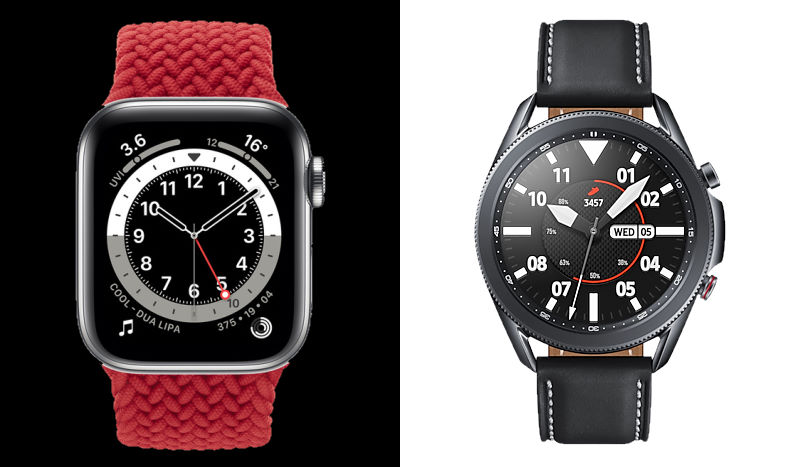 Choosing a winner this year was a much tougher job than it has ever been. You'd have immediately noticed two things that stand out. Firstly, we have never had a tie in any category before. Secondly, one of the winners actually has a lower score than another watch. So let us talk you through our process.

The Apple Watch Series 6 was an easy choice. Year after year, it maintains very high points overall for its consistently high bar for build quality and usability, and the fact that it's the only smartwatch here that is able to use all of its listed features out of the box (yes, I'm specifically referring to its ECG functionality). You also get just about everything else that makes it a truly complete smartwatch experience, from Apple Pay to its App Store, and with the Series 6, expanded fitness and health services.

But why did we also choose the Samsung Galaxy Watch 3 as co-winner in this category? Why not the Huawei Watch GT 2 Pro if we're going to let numbers speak for themselves? Well, because this year's watches aren't big improvements over their predecessors, it affected their individual review and scoring.

However, if we're looking broadly in the smartwatch category, it becomes very clear that both Apple and Samsung are the only true choices for each platform; iOS and Android. Everything that we said about the Apple Watch Series 6 for iOS users, the Samsung Galaxy Watch 3 can do for Android users. It has a proper app ecosystem in Samsung's Galaxy Store, it has a widely accepted payment system in Samsung Pay, it has a great UI control mechanism, it has excellent - and free - advanced fitness metrics and workout services. The only thing it can't do (yet) is ECG, but that's not a fault of the watch.

So where does that leave the rest of our nominees? The Fitbit Sense had new technology, but implementation was neither here nor there and to be honest, a little frustrating to use. Huawei's Watch GT 2 Pro is a great piece of hardware, but isn't able to provide the full smartwatch experience. The Oppo Watch has potential, but usability is marred by non-matured software.

For more details on how we rated these products, check out the full reviews and articles listed in the References section below.