The Best of the Best - High-end Graphics Card Special

The first blow came in June, in the form of NVIDIA's latest GeForce GTX 200 cards. These one billion over transistor GPUs were unlike anything we've ever seen before. Its GPU was as large as it was fast, and our initial tests with it revealed that it was substantially faster than anything else on the market today. Once again, the honor of having the fastest graphics card went to NVIDIA. At that point of time, and with these latest additions to the NVIDIA arsenal, we couldn't foresee how ATI could possibly launch a comeback.

But comeback they did, in the guise of their HD Radeon 4800 series of cards. Rather than go head-to-head with NVIDIA in vying for the fastest graphics card mantle, what ATI did instead was to create a fairly powerful yet competitively priced GPU, placing their product squarely in a sweet spot. With that, the launch of the HD Radeon 4800 cards saw NVIDIA taking immediate and drastic actions. Most significantly, in response to the new cards from ATI, NVIDIA abruptly slashed prices off their latest GTX 200 cards by as much as US$150. This smells of sheer desperation if you ask us.

ATI then followed up with a sweet uppercut by releasing the dual-GPU HD 4870 X2, which is essentially two HD 4870 GPUs squeezed onto a single PCB. In a single masterstroke, the new HD 4870 X2 allowed ATI to reclaim the title of the single fastest graphics card from NVIDIA. Something no ATI card has done for sometime.

At that point of time, NVIDIA was suddenly looking rather vulnerable, because not only did they have to deal with the constant onslaught from ATI, they were suffering from problems of a different sort - reliability. Sometime in mid-July, news spread that many of NVIDIA's 8400M and 8600M mobile-GPUs were suffering from some sort of a heat issue, which caused the GPUs to overheat and malfunction. To combat the problem, NVIDIA eventually had to set aside around $200 million dollars to cover costs of repairing and replacing these faulty GPUs.

Eventually, however, they responded to ATI's waves of attack by announcing the improved GeForce GTX 260, aptly dubbed the GeForce GTX 260 Core 216, because of its 216 stream processors - 24 more than the original GTX 260. NVIDIA claims that with the additional stream processors, it will be faster than its direct competitor, ATI's Radeon HD 4870, and our initial impressions with the Leadtek GTX 260 Extreme+ seem to confirm that. More recently, NVIDIA announced the coming of their new dual-GPU GeForce GTX 295 card. The results of our preview suggest that this is now the reigning speed king amongst graphics cards, and is an indication that NVIDIA is slowly but surely getting themselves back on track.

Now, with the year nearing at its end, we take a look back at these high-end GPUs and have, in our selection here, the creme de la creme of cutting-edge graphics cards. Each of these cards represents the best their respective SKU has to offer, and we will be pitting it against each other. So let the battle begin. 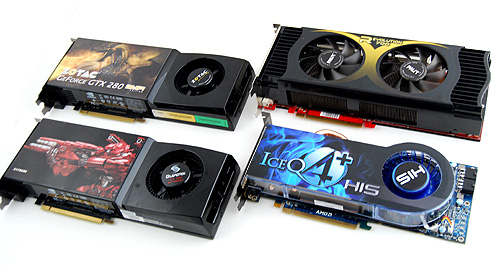