First shown off at this year’s ISE (Integrated Systems Europe) audiovisual exhibition in Amsterdam, BenQ bills the 2,200-lumen W11000 a “reference-grade” home theater projector. And it’s not just because of its 4K (3,840 x 2,160 pixels) resolution. For a start, the W11000 is currently the only DLP 4K projector that’s certified by THX, a U.S. audio and AV standards company that’s just recently acquired by Razer. According to BenQ, the W11000 has gone through no less than 200 bench tests to ensure that its picture quality is top notch.

The way the W11000 does 4K is also worth noting. It uses Texas Instruments’ new 0.66-inch DLP 4K UHD DMD (digital micromirror) chip, which instead of 3,840 x 2,160, has a native pixel resolution of 2,716 x 1,528, with a 5.4 μm micromirror pitch. To attain a true on-screen 4K UHD projection from this non-native 4K chipset, the magic sauce is the in-built XPR (eXpanded Pixel Resolution) tech that makes full use of the chip’s fast switching speed. In simple terms, an image is first output in 1/120 second, and after a super-fast pixel shift via a precise optical actuator, another image is generated in the next 1/120 second. Both images are then processed and combined to give a 3,840 x 2,160-pixel image in 1/60 second. One can debate all day if that’s as good as a native 4K chip implementation, but one also can’t deny the cost advantage of such pixel-shifting projectors (other examples: JVC’s e-shift projectors and Epson’s EH-LS10000) compared to high-end native 4K projectors. Also, it seems to me that by virtue of the W11000 starting off with a higher resolution than other pseudo-4K projectors and is thus able to end off with 8.3 million effective pixels in its final output, it fulfills CTA’s (Consumer Technology Association) definition of a 4K UHD projector.

Additionally, BenQ stresses that by adopting a 1-chip solution, the W11000 doesn’t have to deal with pixel alignment issues that other multi-chip projectors face. For what it’s worth, the W11000 uses a 6-segment RGBRGB color wheel, and its dynamic contrast ratio is rated at 50,000:1 (with Dynamic Iris enabled). So, that’s the semiconductor side of the story. Of the optics side, the W11000 uses a 6-group, 14-element lens array to improve light penetration and thus overall picture performance. (Which is really important considering the size of the chip.) And the sharpest image is always achieved via a True Zoom system that automatically adjusts the zoom ratio (1.5x) based on the focus adjustments. Horizontal and vertical lens shift (by hand) is possible as well, and if you want to get rid of unsightly letterbox bars when you’ve 2.35:1 aspect ratio content, you can attach an optional anamorphic lens, like a Panamorph Paladin or Phoenix Pro lens.

Connectivity-wise, the W11000 has two HDMI ports, but only one supports HDMI 2.0 for 4K/60p and HDCP 2.2 and 4K upscaling. It also has a D-Sub connection and LAN port. Missing however are support for HDR and the BT.2020 color space, which is a bit of a letdown if you’ve a 4K UHD Blu-ray player like the Samsung UBD-K8500 that supports HDR10 titles. This omission undeniably makes the projector less future-proof.

All that said, I can't help but be excited about the BenQ W11000's retail price of S$7,299. Now, BenQ has only showed me a few simple test clips, and while they looked good for the most part, I won’t go as far as to say that it’ll pose a threat to Sony’s VPL-VW5000ES. But if it could get anywhere close to the performance of, say, the VPL-VW550ES, then it could very well be on its way to becoming a value for money hit among enthusiasts. Remember again that you're trading niceties like HDR compatibility, lens position memory, powered zoom and lens shift - features common on 5-figure home theater projectors - for this (relatively) more wallet-friendly price - you've to decide if that's worth it.

The W11000 will go on sale starting mid-December. You can approach Home Cinema Pit and KEC Sound and Vision to place an order. 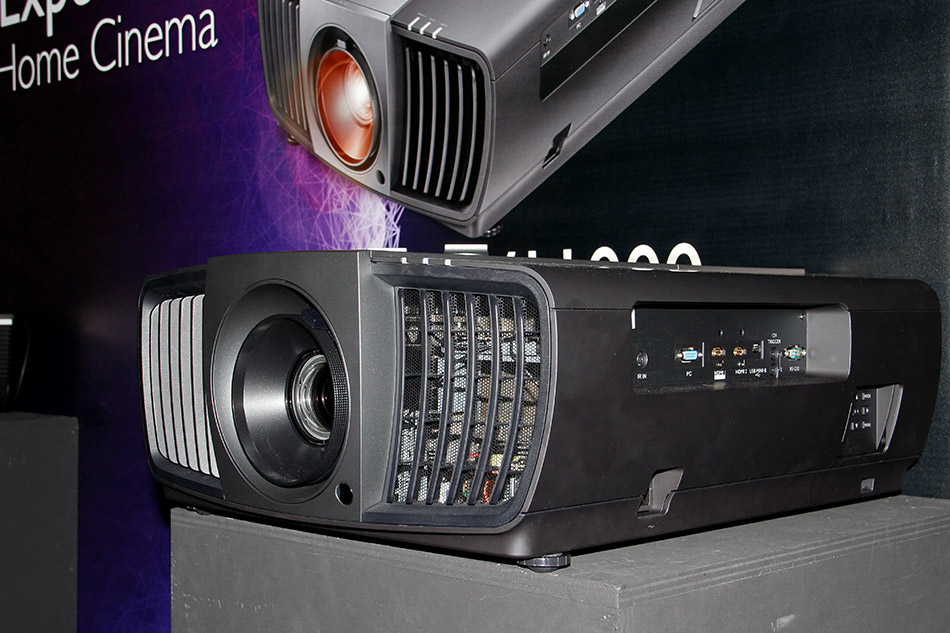 Also announced today is the W8000, a 1080p home theater projector that like the W11000 has received a THX HD Display certification and is capable of 100% Rec.709 delivery. Priced at S$3,888, many of the niceties we see on the W11000 are also found on the W8000, including H/V lens shift, 50,000:1 dynamic contrast ratio, up to 6,000 hours lamp life in SmartEco mode, a pre-calibrated THX mode, support for an optional anamorphic lens, and support for ISFccc calibration.

Unlike the W11000, the W8000’s standard lens only has a zoom ratio of 1.25x. But it does support five different optical lenses, so you do get options if you need to get closer to or further away from the screen and find that the default lens is inadequate.

The W8000 is already available at Home Cinema Pit and KEC Sound and Vision.