For the Modern Connected Family

When was the last time you counted the number of devices you have connected to your router? How many connected devices do you think you have? Count and add them up - PCs, notebooks, smartphones, tablets, and don’t forget your IP cameras, smart home plugs and any Internet of Things devices you might have. If you happen to have a large family, chances are there could be as many as twenty devices connected to your router. That’s a lot of devices that a single router needs to serve.

And because of the current limitations of router technologies, connecting multiple devices, especially if they are all active at the same time, degrades performance. We explained why in our guide to wireless 802.11ac networking, so if you are unfamiliar with networking in general, the guide is a good place to start reading and catch up on the latest router technologies.

To adapt to our changing needs and usage scenarios, we have the new AC3200 class of routers. These are typically tri-band router and they broadcast three separate networks - two independent 5GHz networks and a single 2.4GHz network. The additional 5GHz network provides 1300Mbps of extra throughput, giving a maximum theoretical data transfer rate of 3200Mbps - 1300Mbps each from the 5GHz bands and 600Mbps from the 2.4GHz band. The idea is to put the faster devices on one 5GHz band and the slower ones on the other. This way, on the faster band, the amount of time needed to serve each device will be kept down to a minimum, allowing it to quickly serve one device and then the next. And as we have shown during our testing of the Linksys EA9200, this technology really works. Not content to let Linksys have the AC3200 market all to themselves, ASUS and D-Link both recently launched their own AC3200 router. Now it’s time to find out which is best. 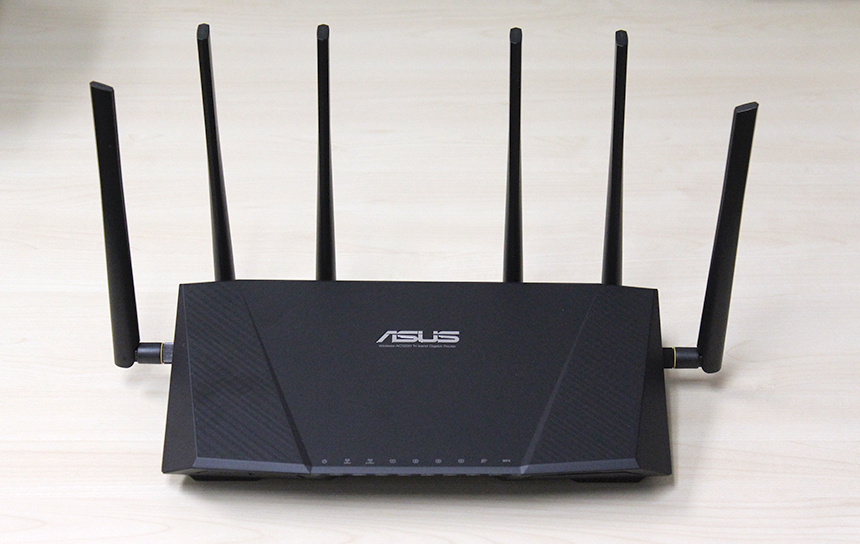 We first saw the ASUS RT-AC3200 at Computex 2014 last year. Needless to say, it was the sheer number of external antennas that it had that caught our eyes. Furthermore, it was also the first AC3200 class tri-band router that we saw. After a long wait, it is finally here now.

Under the hood, the ASUS RT-AC3200 router is powered by Broadcom’s 5G XStream chipset, which consists of a single 1GHz dual-core Broadcom BCM4709A and three offload Broadcom BCM43602 processors, each dedicated to one of the RT-AC3200’s three radios. The 5G Xstream chipset is paired with 256MB of RAM. This configuration is similar to the Linksys EA9200 router. 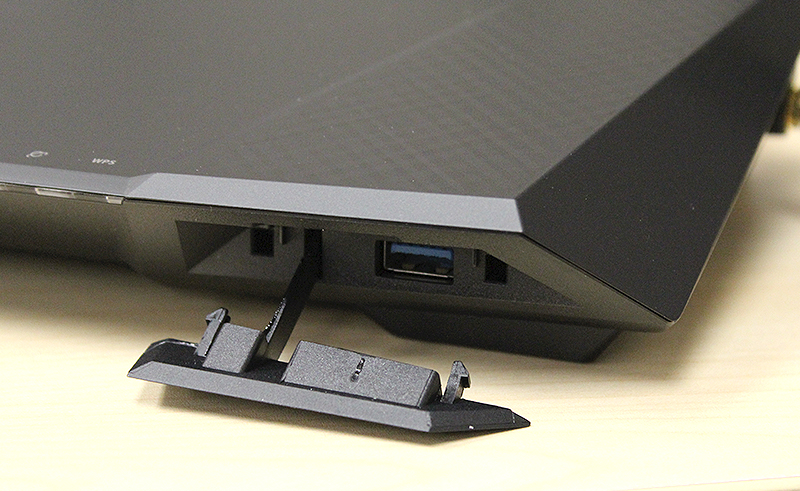 Elsewhere, the ASUS RT-AC3200 router has the same row of LED status indicators upfront like the RT-AC87U router. However, the positioning has been slightly revised. Compared to the RT-AC87U router, they now protrude slightly, making them easier to see, plus they glow brighter. Like the RT-AC87U router, the RT-AC3200 router’s single USB 3.0 port is still positioned at the front. This is an odd choice as plugging in devices (presumably an external storage device to take advantage of the USB 3.0 port's superior speed) would break up the router’s good looks and makes for a messy setup. On the front are also two buttons, one to turn off the LED status indicators and another to turn off Wi-Fi.

Setting up the ASUS RT-AC3200 router was a breeze thanks to the well thought out and extremely functional ASUSWRT setup interface. It’s not the prettiest looking, but it loads quickly and it gets the job done. We like how it provides a good balance between ease of use and options for more advanced users. As ASUS’ latest flagship router, the RT-AC3200 router comes with all of ASUS’ latest features including Adaptive QoS, AiCloud 2.0 and AiProtection. Adaptive QoS is a form of QoS that adapts dynamically based on usage scenarios and network workloads. AiCloud 2.0 is ASUS’ second-generation cloud storage utility. Users can connect external storage devices to the router and access them remotely from anywhere in the world using an accompanying app on their smartphone or tablet. Finally AiProtection is a built-in anti-spyware and anti-malware utility that actively scans incoming packets of data. 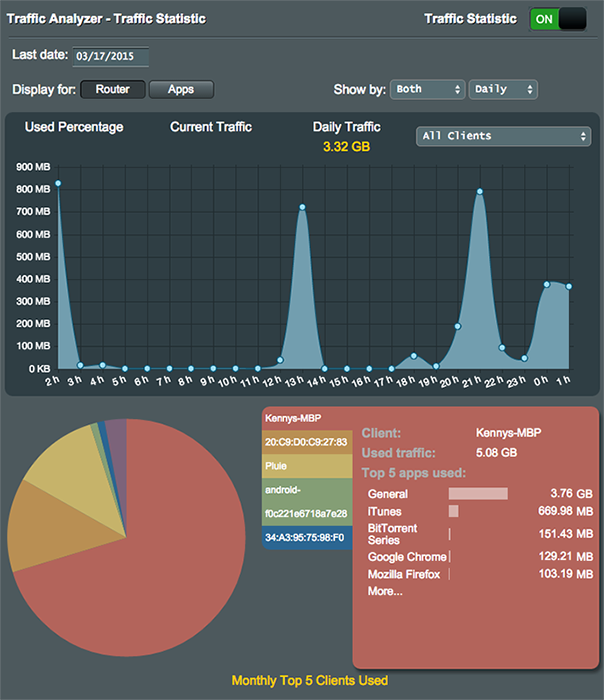 The ASUS RT-AC3200 router also gets a new feature called Traffic Analyzer, which lets users analyze their traffic and usage on a daily, weekly or even monthly basis. It’s really fun and interesting to see which user or device is consuming the most bandwidth, and it is also a handy way for parents to keep track of their children’s usage. There’s also an additional tab that shows real-time traffic usage.

The ASUS RT-AC3200 features Tri-band Smart Connect which automatically manages and assigns devices to either the router’s single 2.4GHz or dual 5GHz bands to maximize performance. This is similar to Linksys’ Smart Connect technology. However, unlike Linksys’ Smart Connect technology which broadcasts its twin 5GHz networks as a single SSID and its 2.4GHz network as a separate one, the RT-AC3200 router goes one step further and broadcasts all three of its 2.4GHz network and twin 5GHz networks as a single SSID when its Tri-band Smart Connect technology is enabled. This makes it especially easy for less tech savvy users since everything is taken care of by the router. However, this also means that devices can sometimes suffer from drops should the router decide that it needs to move devices around on its Wi-Fi network to maximize performance. Advanced users who want to manage the way devices connect to the router manually can choose to configure the RT-AC3200 router to broadcast three separate networks. 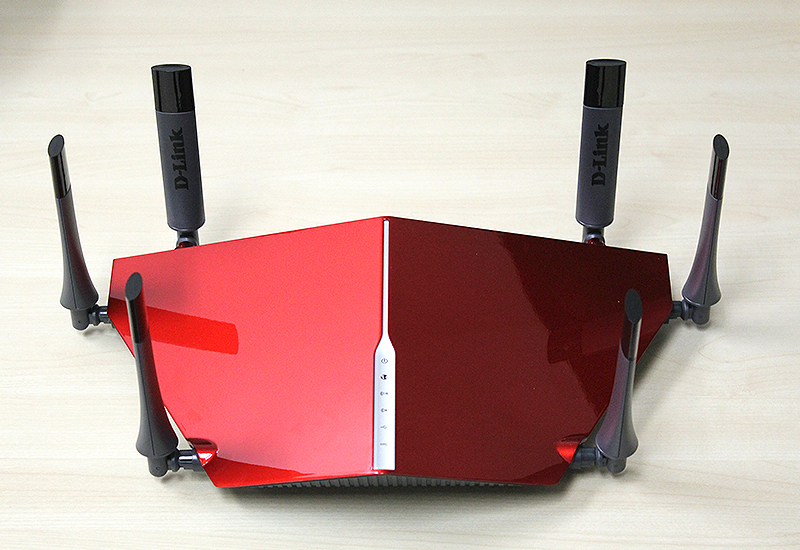 We first laid eyes on the D-Link DIR-890L router earlier this year at CES 2015. It was difficult to miss, considering its striking blood red chassis, numerous antennas, and greater size. While it might be announced later than the ASUS RT-AC3200, it was actually faster to market and was released locally in early February. So let’s have a closer look at this brightly colored router. 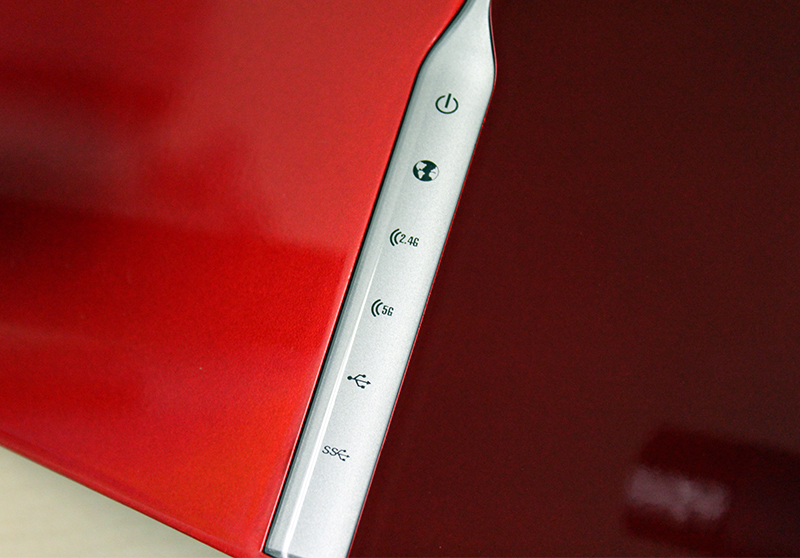 In terms of design, the D-Link DIR-890L router is unlike any other router we have seen. To begin, its choice of color can only be described as bold, but we think it is a move that has paid off. Coupled with its aggressive pyramidal design, steep sides, and large external antennas, the DIR-890L router looks like its ready for a fight. However, we will concede that its striking looks is not exactly for everyone. At nearly 40cm wide and weighing close to a kilogram, it is also incredibly large and heavy. Furthermore, even with its immense size it does not feature any more ports than its rivals. On the front, right down the middle, there’s a row of LED status indicators, but only for the WAN port, wireless networks and USB ports. This means that if you are having trouble with your LAN connections, there’s no quick way to see what’s wrong. 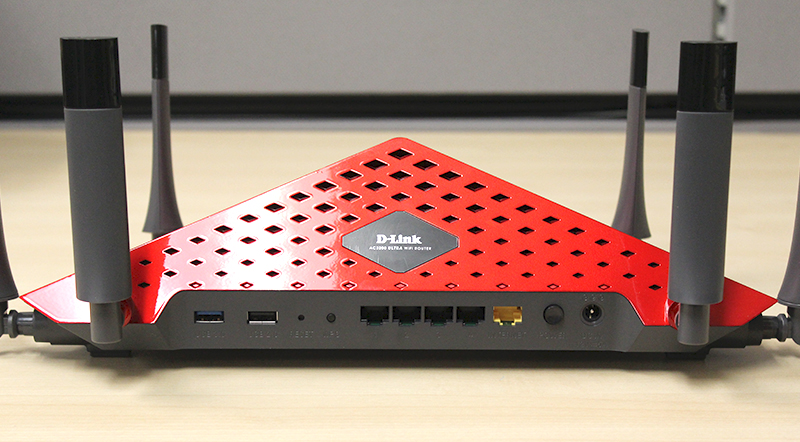 Behind the router, users will find the usual single Gigabit Ethernet WAN port and four Gigabit Ethernet LAN ports. There’s also a USB 3.0 and a USB 2.0 port. Considering the size of the router, we expected a bit more in terms of connectivity, but considering that all routers in this class offer the same connectivity options, we suppose we cannot fault the DIR-890L for it either. The WPS and reset buttons are also located at the rear of the router. If we were to compare, the arrangement of the USB ports on the D-Link DIR-890L is much more convenient and sensible.

Setting up the D-Link DIR-890L router was a breeze thanks to D-Link’s easy to navigate and intuitive setup user interface. Users can also downlink the mydlink Cloud app (free for iOS and Android devices) to remotely control and manage their routers. However, like its competitors, the implementation of such apps still leaves much to be desired since some features are missing from the app. D-Link also offers another app called SharePort that lets users access files on external storage devices connected to the router using their iOS or Android device. 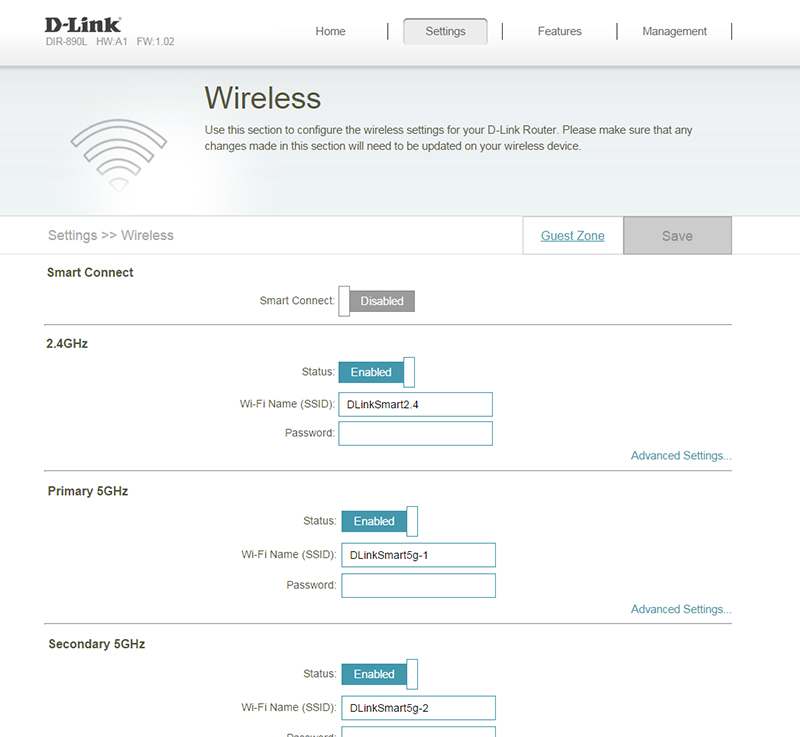 Like the ASUS RT-AC3200 and Linksys EA9200, the D-Link DIR-890L router also has Smart Connect technology, which automatically manages devices connected to the router and assigns them to the most efficient band. Interestingly, like the ASUS RT-AC3200 router, enabling D-Link’s SmartConnect will cause the router to broadcast only a single SSID, which all devices can connect to. From there on, the router will automatically move devices around on its three bands to maximize performance. While this is undoubtedly more convenient, there is the chance that users’ connections will be interrupted when the router decides it needs to move devices around to make more efficient use of its available bandwidth. For more savvy users who want to manage how devices connect to the router themselves, the D-Link DIR-890L can also be configured to broadcast three separate networks.