A barrage of ‘Coffee Lake’ mobile processors launched, including a Core i9 performance part Intel has just massively expanded its 8th Generation Core ‘Coffee Lake’ architecture into the notebook space with a slew of processors from the Core i3 all the way up to a new Core i9 performance part with six cores (a first for mobile processors) and up to 4.8GHz Turbo Boost! Along with new processors, they've also massively updated the platform capabilities with a new chipset, higher performance wireless connectivity, and even storage acceleration through Optane Memory. In short, performance uplift can be felt across the entire platform.

Up till now, Intel has only launched its 8th Generation Core processors for the desktop (you can read about Coffee Lake architecture technology here and in more detail here), and as part of their next phase, the notebook variants are finally upon us.

Interestingly, this year’s mobile announcements have gotten more fanfare than its desktop counterparts last September. This could be because mobile gaming, AR and VR applications are on the rise and Intel is looking to capitalize on the scene. We’re getting no less than 11 new mobile processors, with the new Core i9-8950HK leading the pack. Just a little recap on now Intel classifies its mobile range, the H-series processors are meant for performance computing and these parts come with a 45W TDP and optimized for use with discrete graphics, while the U-series are mainstream processors with a 28W TDP and feature Intel Iris Plus integrated graphics. 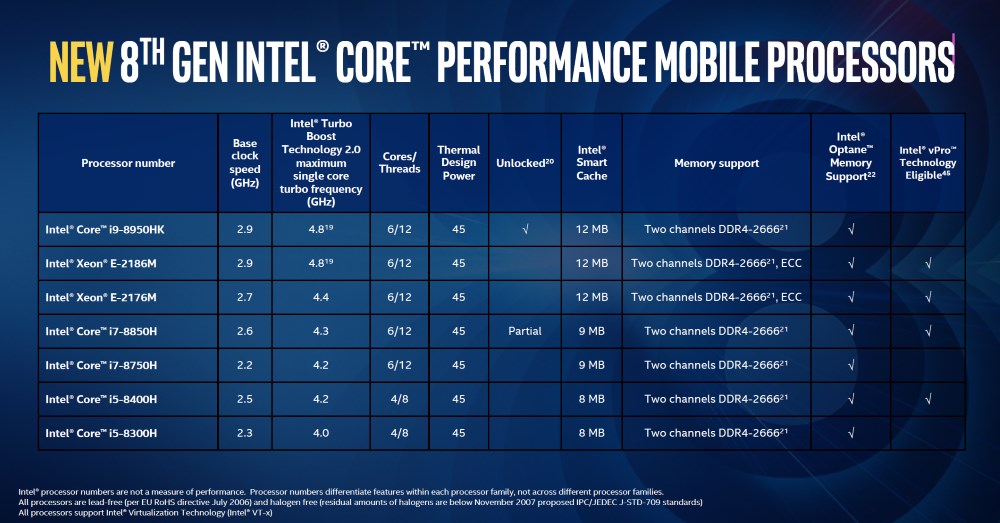 As mentioned, headlining the H-series is the 6-core/12-thread Core i9-8950HK. This is a fully unlocked part with a 2.9GHz base clock speed and 4.6GHz Turbo Boost. It also features what Intel calls Thermal Velocity Boost or TVB, which will further up the speeds to a maximum of 4.8GHz if certain criteria are met. This 200MHz extra headroom is automatically allocated if the CPU temp is operating under 50°C and has turbo power budget available. If this sounds similar to AMD’s XFR (eXtended Frequency Range) on their Ryzen processors, it is.

This Core i9-8950HK and the new top end Xeon E-2186M are the only two 8th Gen Core mobile processor to feature Thermal Velocity Boost. The other stand out feature of the Core i9-8950HK is its 12MB cache. According to Intel’s charts, the new i9-8950HK can net you up to 41% more FPS and 59% faster 4K video editing compared to a similarly specced Core i7-7820HK based machine. The U-series range is also updated with four 8th Gen Core processors: one i7 class, two i5 models and lastly an i3. All the processors here will feature a 4-core/8-thread setup except the Core i3 model, which has only 2-cores/4-threads.

As with its desktop counterparts, all 8th Gen Core mobile processors will be running on the Intel 300 series chipset platform. On the mobile end, the main improvements include a new 2x2 Wireless AC 160MHz, which supports speeds of up to 1,733Mbps. This is compared to the previous generation 2x2 Wireless AC 80MHz, which maxed out at 867Mbps.

Yes, they did. However, the initial launch was based on the Kaby Lake Refresh microarchitecture, not Coffee Lake. Having said that, the new processors launched today do not replace the previously released models and will augment the line-up of existing 8th Generation Core U-series processors.

Sounds confusing? For techies who follow these microarchitecture and model changes, yes. However, Intel has long declared that its processor offerings will no longer follow their tradition tick-tock manufacturing cycle cadence and will focus on process technology and feature refinements too when releasing new models.

So today's Coffee Lake processor editions are more refined editions that are manufactured on the 14nm++ process technology and bring with it feature updates from the platform level perspective (by pairing it with a newer 300-series chipset).

So here's how the entire 8th Gen core processors stack up on the mobile segment:- With the launch of the 8th Gen Core mobile processors, Intel is also expanding its 8th Gen Core desktop family with the following range:- All the new 8th Gen Core processor platforms across mobile and desktop will now have support for Intel Optane memory solutions and a new Optane-fueled Data Drive Acceleration feature that benefits standard HDDs by helping boost load times on these secondary drives that most people still use for data and application storage. According to Intel, Data Drive Acceleration will provide up to 4.7X faster game loading and up to 1.7X faster media loading times.