Auditioning the Devialet Phantom: An evening of acoustic indulgence

Auditioning the Devialet Phantom: An evening of acoustic indulgence

Acoustic engineering at its finest

We truly didn’t know what to expect when we stepped into the premises of AV Intelligence at Millenia Walk, other than the fact that the Devialet Phantom was an incredibly modern looking speaker and that it promised excellent sound. Labeling itself as an "implosive" sound center certainly did little to lift the intrigue, but all those questions were answered once the demonstration got started. First a little about the company itself- Devialet is a French company started by Pierre-Emmanuel Calmel that’s focused on bringing about acoustic excellence. The name "Devialet" actually refers to Sieur de Vialet, engineer and companion of Diderot, who participated in writing articles for the Encyclopedie Francaise, which was one of the key elements that led to the French Revolution.

Following in that vein, it seems Devialet hopes to start a revolution of their own in the audio industry, taking the Philosophy of Enlightenment at the heart of their inspirations: technological progress makes Man better. Already the company has won 45 awards, and garnered some 45 million Euros worth of investments, with 350 retailers in 60 countries to date, with plans to launch flagship stores in London, New York, Berlin and Hong Kong by the end of 2015. 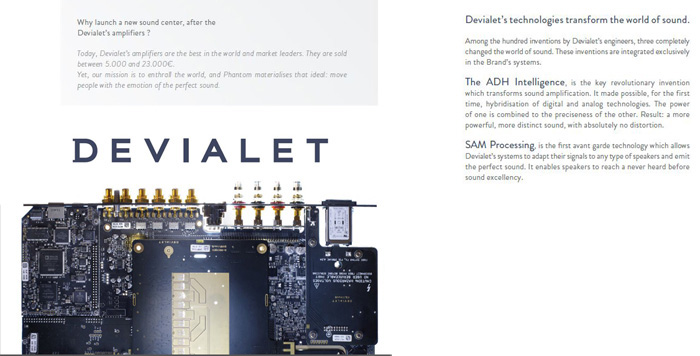 We were first treated to a performance by the Expert 200 amplifier, which boasts two of the three main (patented) technologies championed by Devialet: ADH Intelligence or (Audio Digital Hybrid Intelligence) which hybridizes both digital and analog technology using a powerful micro-processor, and SAM processing, which allows Devialet’s systems to adapt any system to the track being played, thus getting the perfect sound out of any set of speakers.

Running a recording of Eric Clapton’s Layla from his Unplugged album, we were really surprised at how crisp the intro sounded, as well as the depth in Clapton’s vocals. Given that this album was recorded in a live setting, we also paid special attention to how the sounds of the crowd were rendered, and it certainly felt like we had front row seats to the performance. 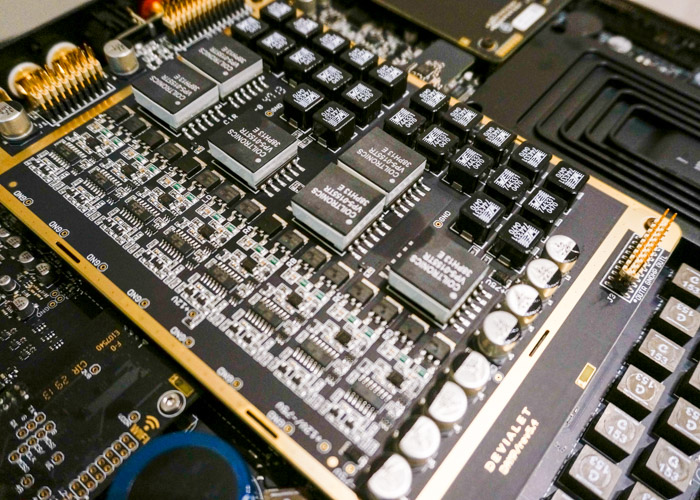 Sneaking a peak into the innards of the incredibly slim integrated amplifier and you almost understand immediately why the sound can be so good. The sheer number of chips and components is stunning, and we’re told that there are about 2500 electronic components in each Expert amplifier, but not a single wire! That’s an incredible feat of audio engineering, and it speaks to the amount of time Devialet has spent in research and development before releasing their products.

The amplifiers look quite stunning, with a minimalist approach that certainly look like they would integrate seamlessly into any modern home; no worries that they would stick out like a traditional amplifier. You can bridge multiple units for even better performance, and we’re also told that everything is configurable. Buyers have the option to perfectly configure the system online through Devialet’s website, save the settings to a SD card, and then plug it in to the system to apply the settings, just like running a firmware update on any modern day Interchangeable Lens Camera. 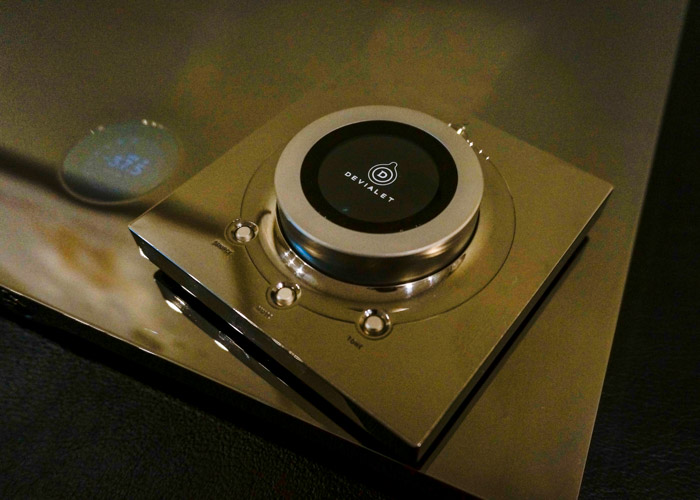 Yann Wacthen (Sales manager, Pacific Area and Country Manager, Singapore) says the concept for Devialet is to "over-provision" their hardware from the start, and then allow the software to catch up, so that their users can enjoy their systems for the maximum period of time.

In fact, the company is committed to keeping their units as current as possible for users that they’re prepared to allow users to bring in their existing units to have the internal components upgraded for 1/3 of the price if ever there is a major overhaul to their products that their existing clients feel a need to upgrade. That’s quite a guarantee, and certainly reaffirms their commitment to making quality products that serve you for a long time. When there’s no audio playing through the sound center though, it’s perfectly silent - even when the volume has been cranked up to a maximum! This means that the internal chatter between components has really been reduced to zero. In fact, the only components that ever seem to move are the bass drivers as music is playing, and as you’ll see in the videos below, the sound center is certainly capable of generating great bass. Our editor first encountered the Phantom at CES 2015 and we've got a clip of that experience, including a full dissected view of it! The Phantom integrates both ADH Intelligence and the SAM processing found in the Expert amplifiers above, and adds Heart Bass Implosion, a technology specifically designed for the Phantom, which allows it to emit ultra-dense sounds by creating lateral beats under very high pressure. How high? 174dB high, which is higher than the acoustic pressure created when a rocket takes off!

This ultra-dense sound carries a physical impact, so you can really feel your music with no distortion to be had at all. The sheer power of the sound center meant that we barely went over the 50% volume mark so we couldn’t quite put that claim to the test over the entire volume range of the sound center, but it certainly seems to hold true for all sensible listening levels. 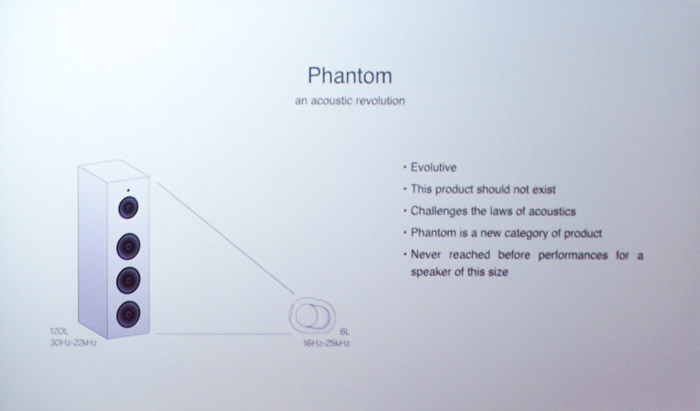 As you might imagine from its spherical design, audio from the Phantom projects in an omnidirectional manner and we’re told the sound should be exactly the same in a 180-degree axis from the speaker horizontally because of the way the drivers are designed and positioned.

It's evident the Phantom also has no trouble filling a medium to large sized room with sound, whether it’s used in a stereo pair or a single unit. Yann played a recording of Individuality (Can I be me) by Rachelle Ferrell, and we were very impressed by the amount of bass reverb on the track, as well as the warm rendering of Ferrell’s soulful vocals. This track has sections where Ferrell’s vocals, an electric guitar, a group of backup singers and her drummer are all going at the same time, and the Phantom seemed to place each and every one perfectly. 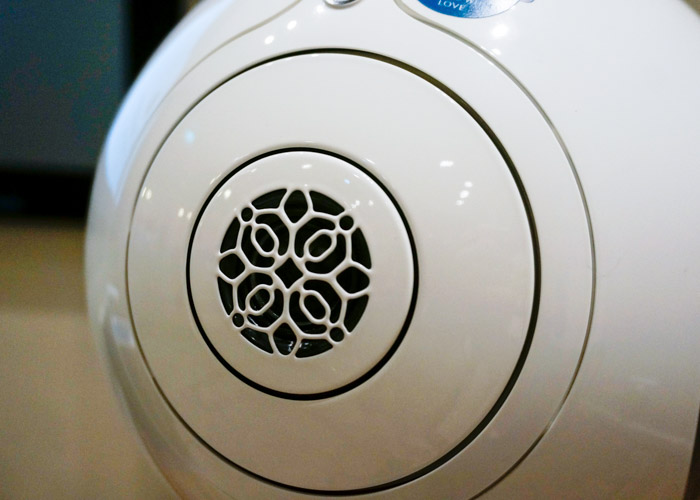 The one thing that really stood out to us though, was the sense of naturalness the Phantom is able to convey. We put Norah Jones’s Come Away with Me album on and stepped out of the listening area back into the main section of the shop, and it really did seem like she was performing live in the room within. Top marks to Devialet for the incredible feat of acoustic engineering then.

Whatever magic they’ve managed to pack into the Phantom, we certainly want more of it – especially when you consider that the Phantom has multiroom capabilities. Connect up to 24 Phantoms via a hub known as the Dialog and you’ll be able to set all of them up in any configuration you wish: Stereo, single units in multiple rooms, multiple units in one room as a cinema configuration and more. The Dialog also allows the Phantom to tap into online music streaming services like Deezer, Tidal and Qobuz, and allows for the transmission of data via PLC (Electric power transmission), allowing you to optimize the audio stream. 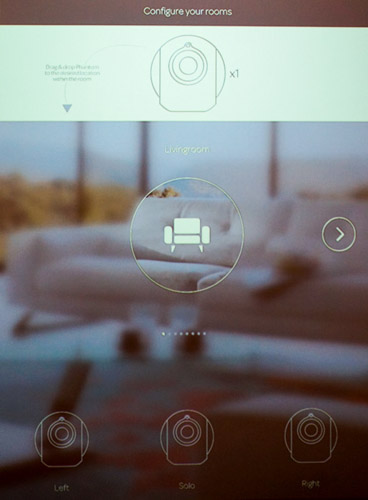 The Expert series of amplifiers are also available now, and come in various configurations starting from S$8990.