Nothing wants to launch a phone in the U.S to challenge the Apple iPhone
Feature Articles

Note: This review was first published on 17 October 2022. 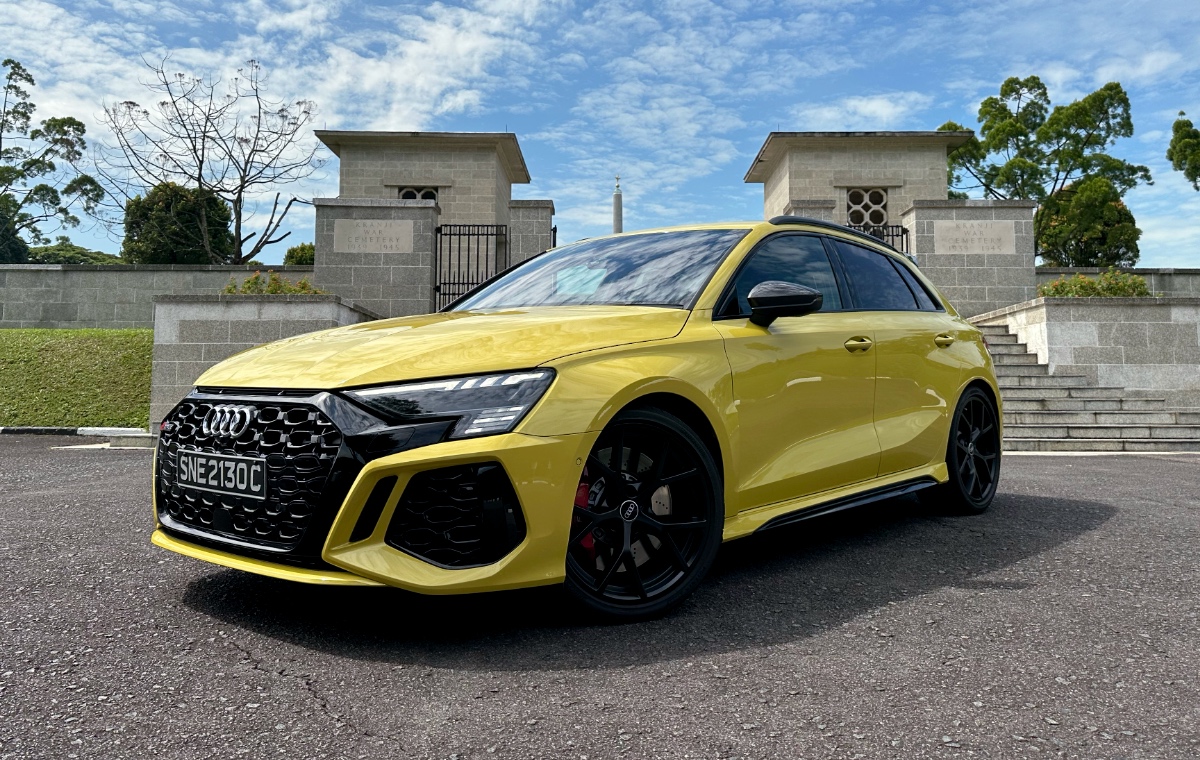 Ever since its inception, the RS3 has been defined as much by its cracking and characterful turbocharged 5-cylinder engine as it is by its lacklustre handling.

Tragically and somewhat ironically, the same engine that makes the RS3 so unique also hobbles it in some ways. Imagine being at a supermarket and trying to steer a trolley full of watermelons, that’s what happens when you put a big heavy 5-cylinder engine ahead of the front axle. 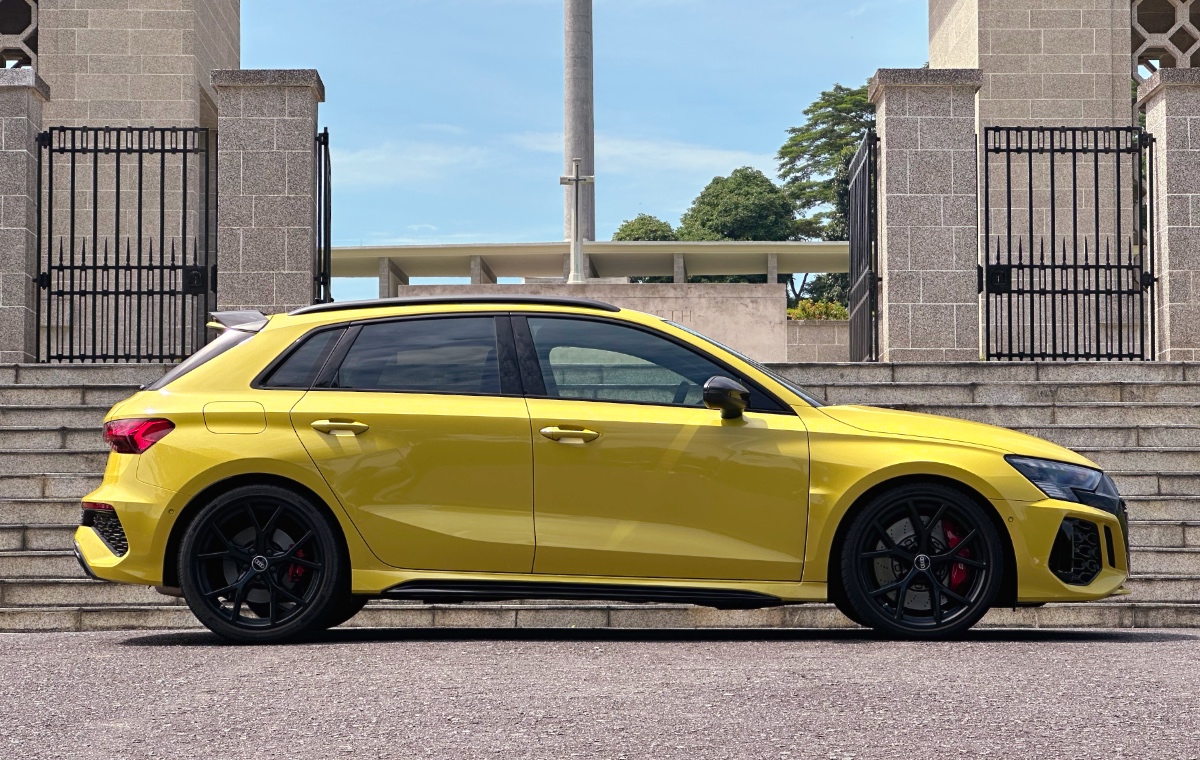 I should know because I owned a first-generation 8P RS3 briefly. It was shockingly fast, but it steered with an uneasy vagueness and felt nose-heavy in corners. Later models improved on this by switching the cast iron engine block to a lighter aluminium one, and Audi kept up with various handling and suspension tweaks. While these changes certainly helped, earlier versions of the car were never truly considered to be a “driver’s car.” And since this is surely the last time we will see Audi’s now legendary 5-cylinder engine in a road car, they have pulled out all the stops to ensure it gets a fitting send-off.

Finally an RS3 that has the driving dynamics to match its epic 5-cylinder motor.

There are big changes to the all-wheel drive system. It still sends most of its power to the front but there’s now a torque-vectoring rear differential that can send 100% of the power it receives to the wheel that is under load. Elsewhere, the new RS3 also gets unique dampers that are supposedly not used in any other VAG product. There’s more negative camber too. And finally, in true RS3 tradition, the front tyres are wider than the back – 265 vs. 245 and Bridgestone Potenza Sports, in case you were wondering. All of this is done to give the new RS3 more front grip and improve turn-in. 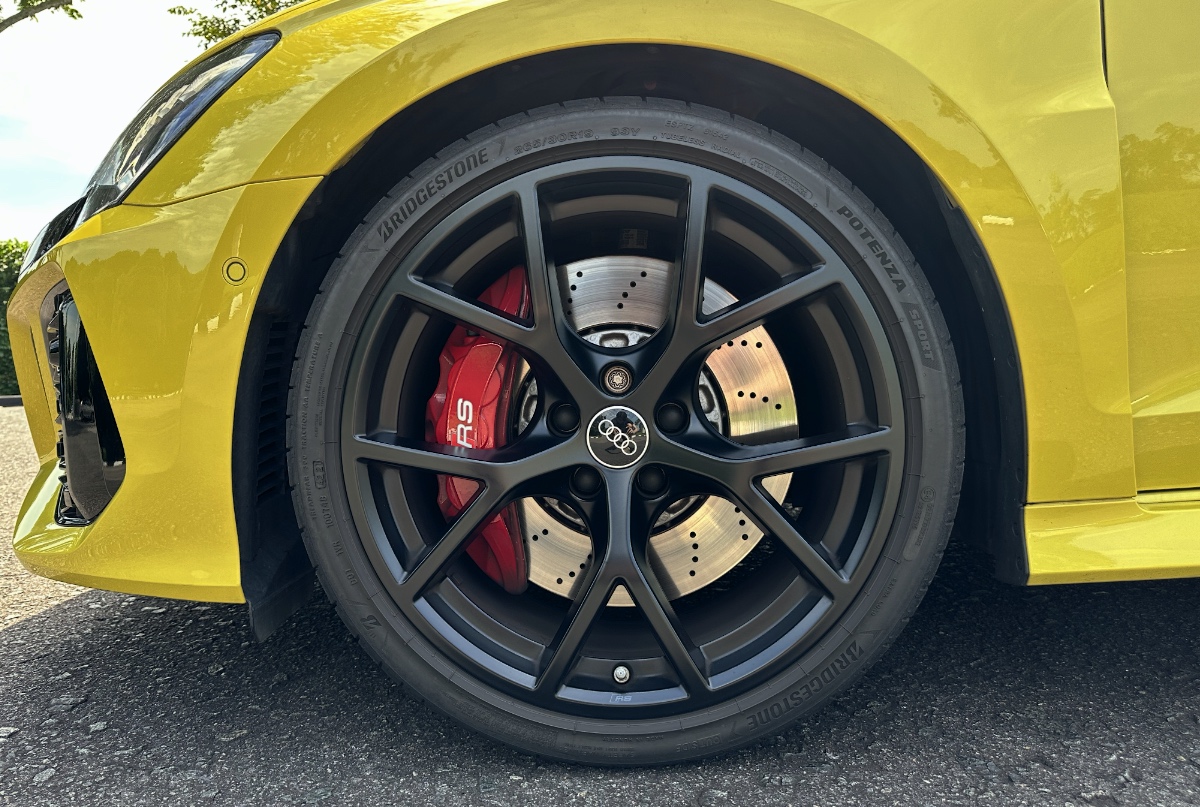 Happily, these changes worked. This is by far and away the best handling RS3 yet. It feels light, tight, and eager. It also steers with an accuracy that was sorely missing from earlier models. And when you find the apex of the turn and give it a full whack of gas, you can feel the rear differential working to tighten your line and kick you down the road. Admittedly, the way it happens is a little abrupt and artificial, but you cannot argue against its effectiveness and how fun it is to finally have an RS3 that genuinely feels like it has power sent to all four wheels.

The ride is firm but remarkably pliant. Even in the stiffest mode, it still rides over uneven surfaces without tossing the driver around too much. In fact, I suspect the ride quality might be even better than the regular A3 that I drove last year. The unique dampers that this car has works. 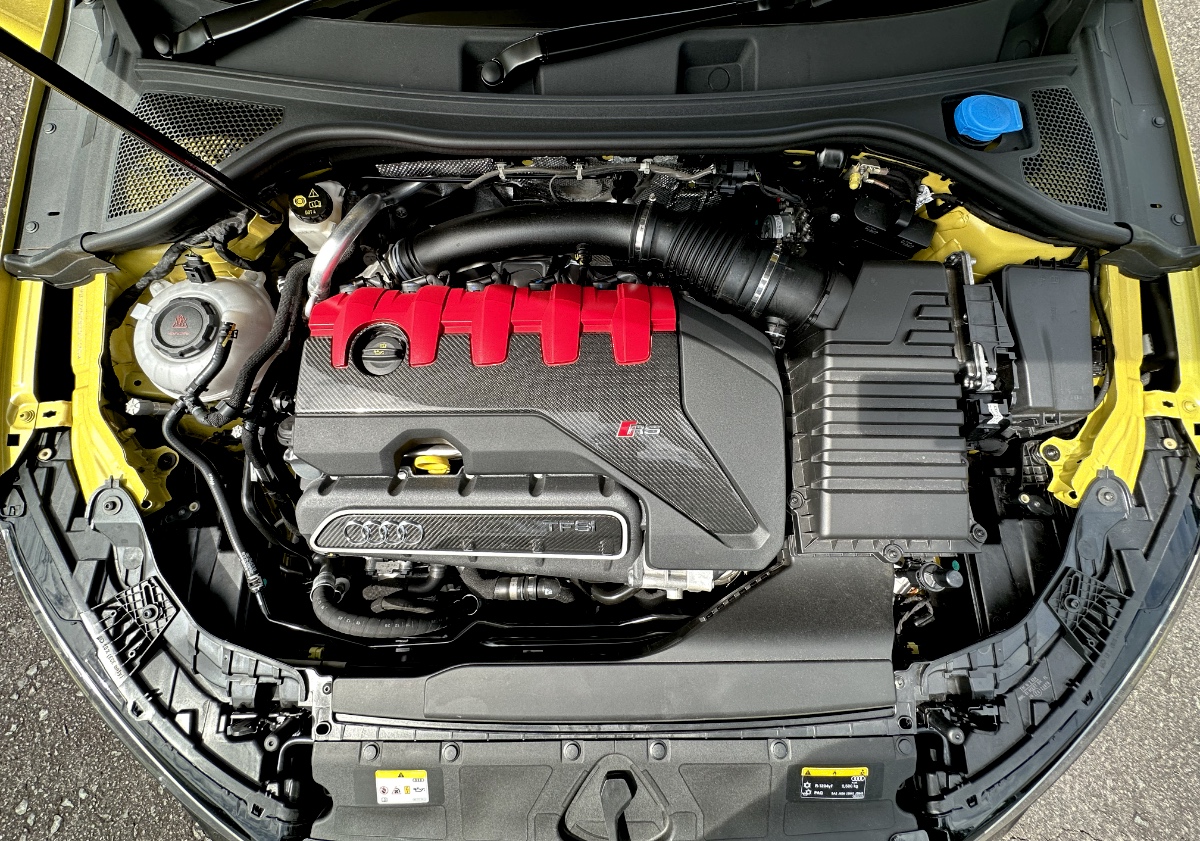 Straight-line performance remains prodigious despite the engine being largely unchanged. Peak power has gone up slightly to 400hp while peak torque has been boosted to 500nm but it occurs slightly later at 2,250rpm. The transmission is still a 7-speed S-Tronic dual-clutch unit. Upshifts are lightning fast but it can be strangely hesitant to shift down at times.

This motor feels laggier than its predecessors and really needs to get above 3,000rpm to get going. But when it does, it hurls the horizon right onto your forehead. You better have your wits about you if you decide to mash the throttle. Audi’s claims of 3.8 seconds to 100km/h are entirely believable and mind-blogging to think how a small hatchback could thump down the road this quick. 10 years ago, this would have been considered supercar levels of performance. 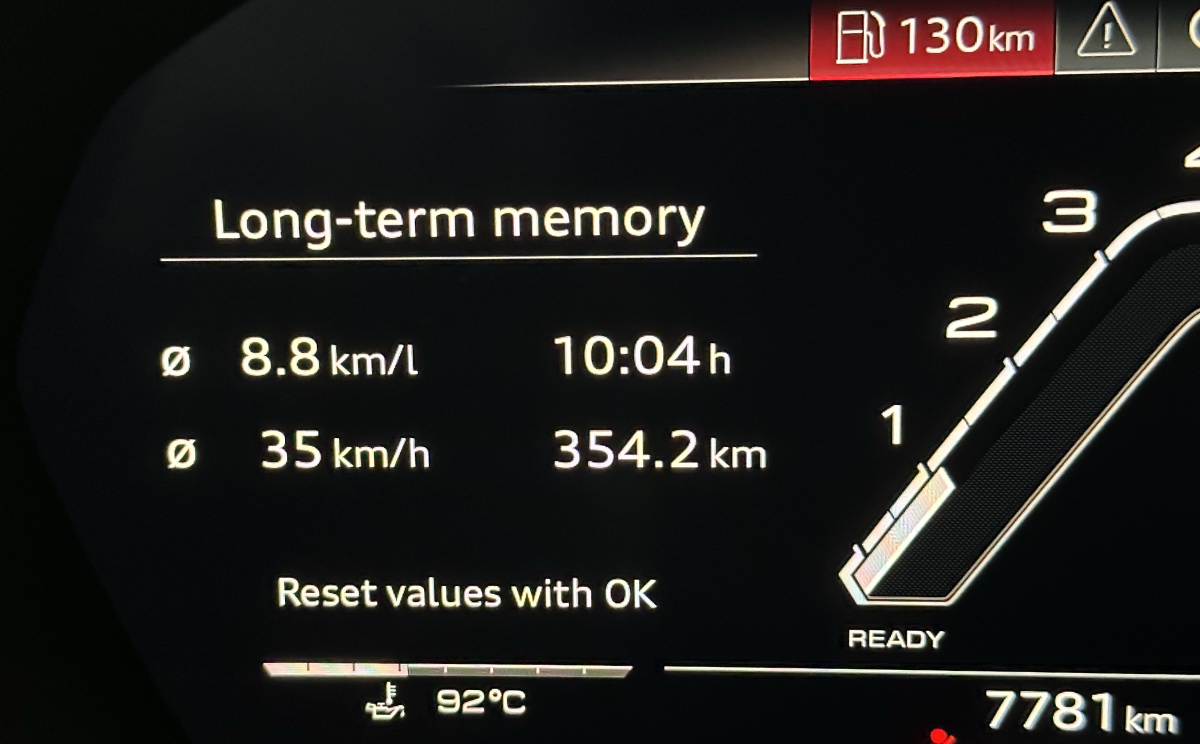 Despite this bombastic performance, the motor is quite frugal – relatively speaking, of course. Thanks mainly to the tall 7th gear, I managed 8.8km/l over 350km of testing. That’s not bad for a 2.5-litre turbocharged 5-cylinder engine making 400hp.

Where the engine falls short is in the way it sounds. Stricter emissions controls have necessitated the need for sound-sapping gasoline particulate filters and so this new RS3 sounds dreadfully muted. This is striking to my ears because older models sounded so good – particularly the 8Vs with the CZGB and DAZA engines. Furthermore, this situation is exacerbated by the fact that modern cars like to pipe loads of fake noises into the cabin. But despite all this, the new RS3 still sounds miles better than any of its contemporary 4-cylinder rivals. There’s an exoticness to the way a 5-cylinder sounds that cannot be matched by any 4-pot, even if it’s strangled by filters. 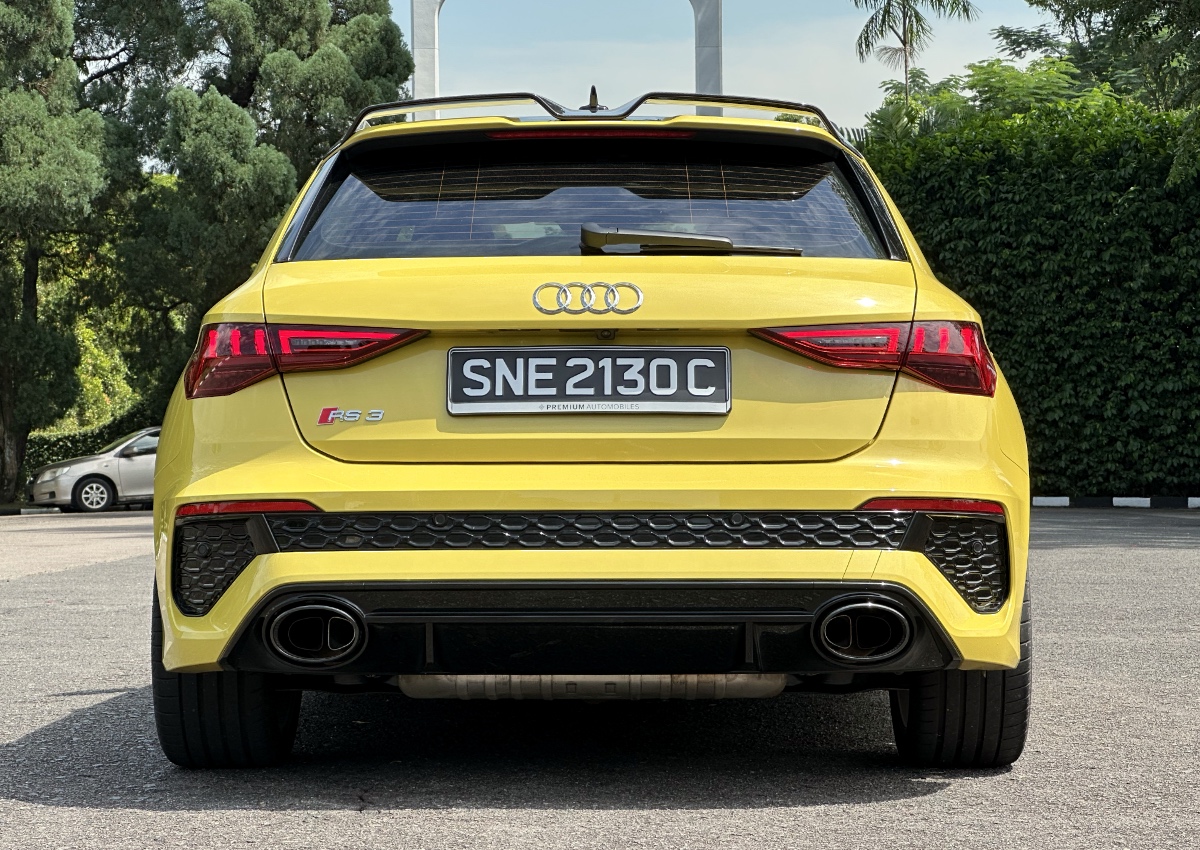 The RS3 also looks special, particularly in the Sportback form that you see here. The flared front fenders are a good match for the aggressive rear bumper. Interestingly, the massive grilles in front are all functional and direct cool air onto various coolers. The rear grille that stretches across the entire bumper is sadly just for optics. Happily, there are real exhausts hiding behind the two large dual pipes. And if you think the test car looks a bit different from the cars you’ve seen on press images it’s because it came fitted with a couple of yummy but pricey carbon bits. The carbon fibre mirror caps, for example, are S$2,679. The carbon roof spoiler? That’s, over S$8,000.

The RS3 is available as a sedan too, but I’ve always viewed the car primarily as a hatchback. Furthermore, the hatchback, with its folding rear seats, is arguably the more practical of the two. Though I must add that rear legroom isn’t great. It also happens to cost over ten grand less than the sedan. 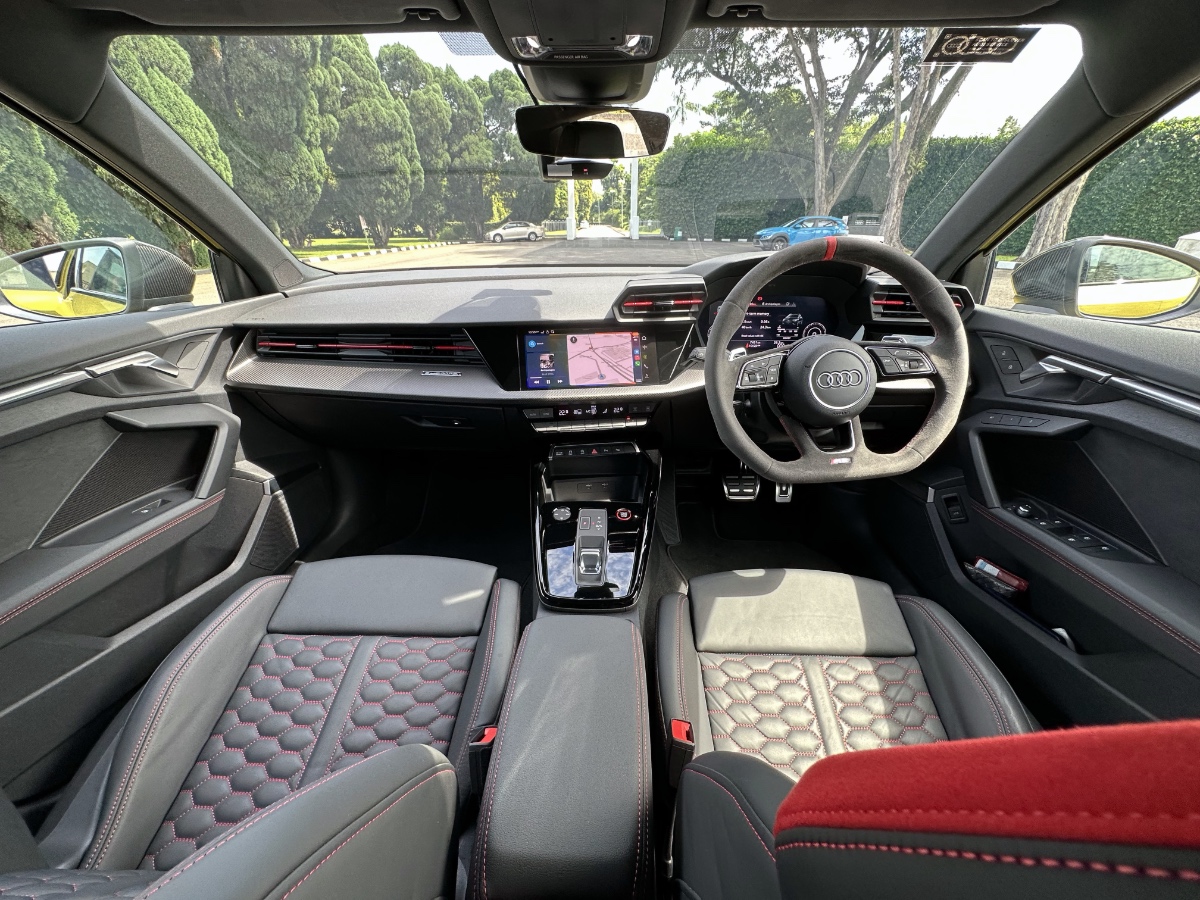 The interior is pretty standard A3 fare, which isn’t as bad as some might think. It looks sporty for a start and feels high quality. The layout is mostly sensible but what irks me is that one of the cup holders is under the armrest. On long commutes with a passenger, one of you is going to be thirsty. Why did they have to move the cup holders to make space for a wireless phone charging pad? It really should have been the other way around.

Some other things about the interior to note. The test car also came with the optional S$4,422 red RS styling pack which adds some red trim and accents in the interior. The flat-bottom steering wheel is clad entirely in Alcantara and refreshingly thin and nice to hold. The paddle shifters, however, are a little inadequate. The seats are comfy and often adequate support but the seating position is too high. I'd like to be lower and closer to the ground. The standard Bang & Olufsen sound system has the potential to sound good if you bother to spend a couple of minutes tweaking it. If left in its default settings, it sounds very unbalanced. Wireless Apple Carplay and Android Auto are supported as standard. The rear view camera comes as standard but the view is presents is curiously and widely distorted. It always looks as if you are about to hit something. 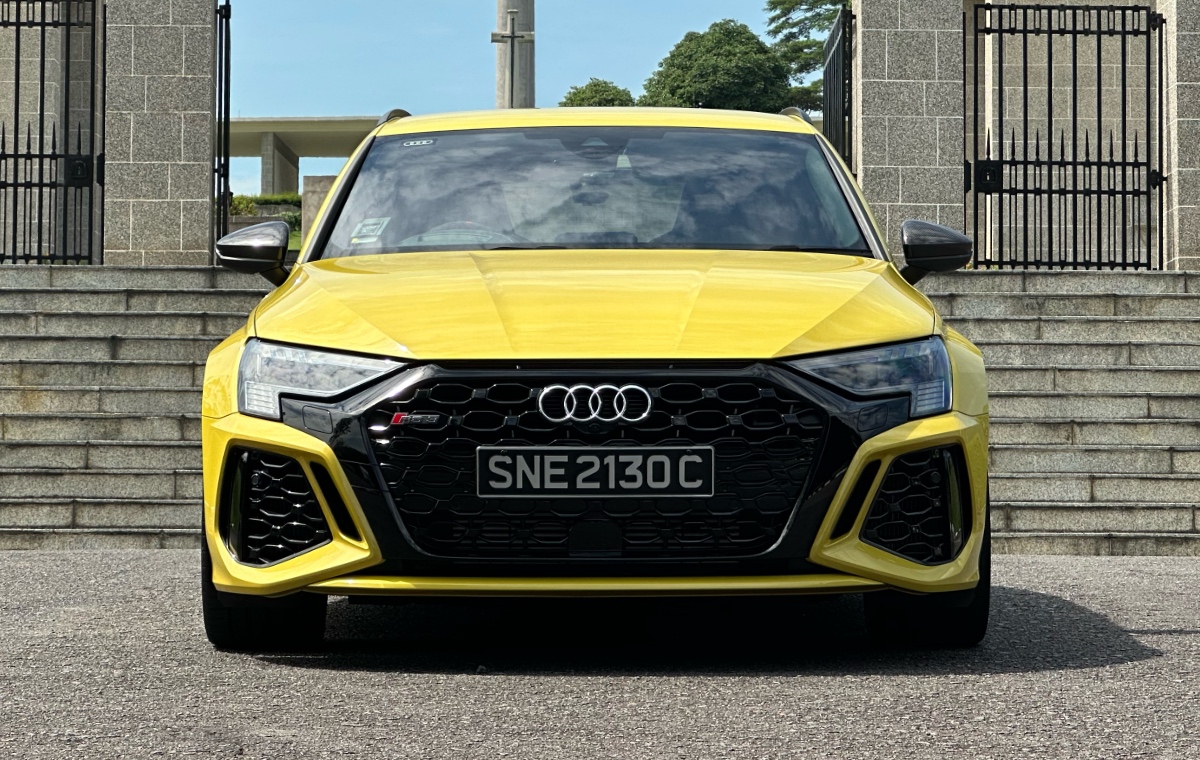 Audi has nailed it. This is unquestionably the best handling RS3 yet and fans of Audi’s super-hatch can finally enjoy that epic 5-cylinder engine without sacrificing driving dynamics.

Now, usually, a car like this is immune from mundane considerations like price but, given the high prices of COE, I feel like this needs to be addressed. Prices of the RS3 Sportback start at just under S$400,000 and it will easily go past that mark once you add in some of the, admittedly quite tasty, optional extras. On the one hand, you can make a case for it with its brilliant motor, excellent handling characteristics, and all-around practicality. But you can also flip the coin around and say that’s a lot of money for what is essentially a little hatchback.

The way I see it is that you are buying into what must surely be the end of an era. With the onwards creep of electrification, this, sadly, must surely be one of, if not the last, 5-cylinder-powered cars we will ever see from Audi. If you have the means, this is a marvellous celebration of one of motoring’s most iconic and special engines. And what’s more, it now has the driving chops to go along with it. It has taken Audi a while to get the RS3 formula right, but like the old saying goes, better late than ever.

The Audi RS3 Sportback is available in Singapore with prices starting at S$393,075 for the hatchback and S$404,395 for the sedan. Prices includes COE but excludes some optional extras on the test car seen here.