Audeze does gaming: First looks at the Mobius headset

Audeze's big break in the gaming scene is the Mobius, a planar magnetic gaming headset 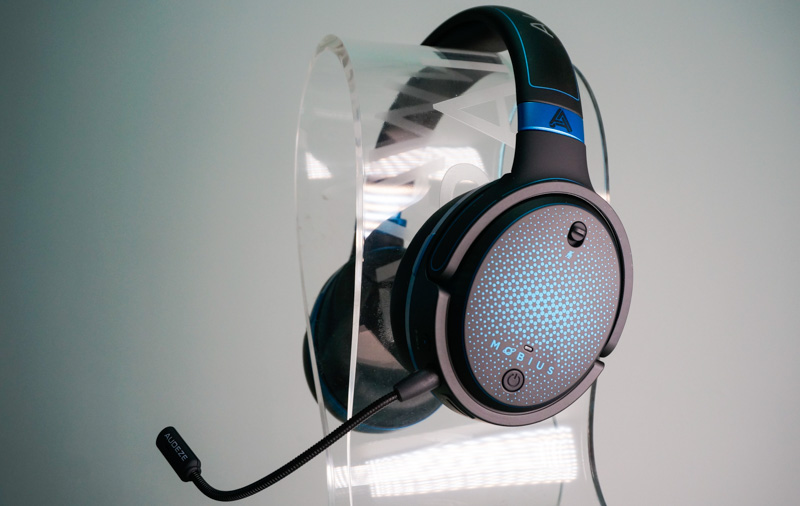 Audeze is a brand that’s best known for its high-end planar magnetic headphones (learn more about them here) like the LCD2 Closed Back and the iSine 10 from last year. So, when asked if we’d like to audition a set of headphones from the company that’s specifically engineered (and marketed) towards gaming we were slightly skeptical, to say the least.

While games have great soundtracks, you don’t expect your regular gamer to strap on a set of planar magnetic headset and start blasting away. Why? Usually due to costs and mostly due to their size. But that’s exactly what Audeze wants you to do – in full 360o surround sound audio no less. You see, the new Mobius uses Waves Nx technology to create 3D audio that incorporates three technologies: sound localization, integrated head tracking, and room emulation. 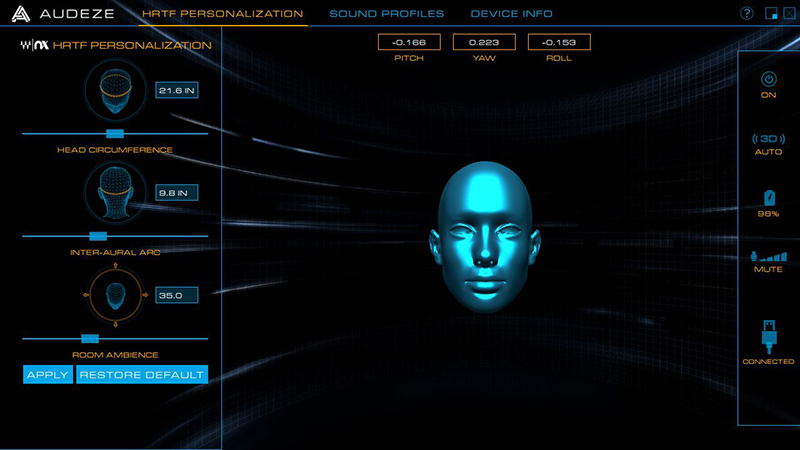 What that means essentially, is that the headphone will track your head movements and update the audio to match. So if for example you’re blasting away at your computer and turn to the left to speak to your friend, the headphone will update to only feed audio to your right ear cup, as that’s facing the action. Room emulation makes this more realistic by creating a sense of space and reflection of sounds within the room, so everything that you’re hearing has been analyzed and taken into account for.

There’s even a companion desktop app that lets you enter the exact measurements of your head circumference and inter-aural arc so that headphone can better take those into account when calculating your Head-Related Transfer Function. This characterizes how our ears receive sound from a point in space and lets you hear a sound in the video in about the same way you would hear it if it was played in front of you. 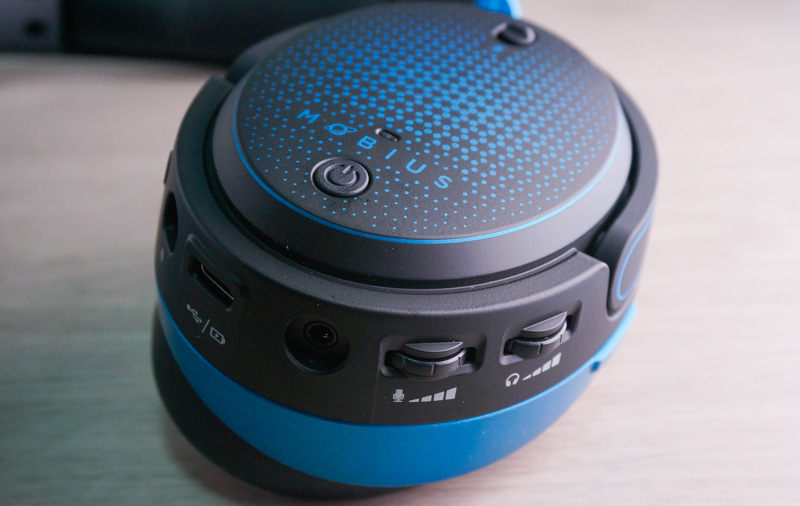 As you can see, the headphones have a very futuristic design. Gone is the trademark grill you find on the LCD series headphones. In its place is a dot pattern that hints of space flight. As you can see, a multitude of ports, dials and buttons can be found on the left ear cup.  There’s a port for the detachable boom microphone with noise-attenuation (included in the package), and volume controls for this as well as the headphones themselves.

A short press and scroll of the microphone volume wheel will change EQ presets within Mobius, though you can also do that within the desktop app. A long press and scroll will switch between audio modes, so you can try out 7.1-channel, 2-channel, and Hi-Res modes to see which fits your preferences. 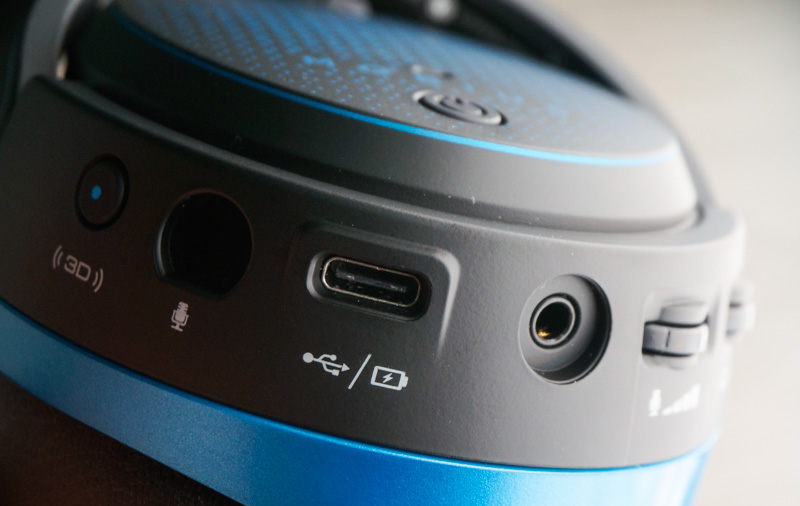 Because the Audeze supports USB-audio, you’ll also find a USB-C port and a regular 3.5mm audio jack.  A mute/unmute switch for the microphone can also be found on the side of the left ear cup so that covers all the controls you’ll need. If you’d prefer to go wireless, the Mobius can do that too via Bluetooth 4.2 with SBC, AAC and LDAC support for about 10 hours of playback. Basically, whichever way you want to get your audio, Mobius has you thoroughly covered.

Does it work as expected?

We gave the Mobius a quick run with a variety of media to see just how the surround sound works, and found the results to be a mixed bag. Audio is certainly good, as the Mobius delivers Audeze-level quality with good detail and realism.

For example, listening to Lady Gaga’s I’ll Never Love Again (from the soundtrack of A Star is Born), the headphones render her vocals with such naturalness and detail you can really feel the emotion in her singing.

Shifting over to a faster moving track like Smoke On the Water by Santana and Jacoby Shaddix gave the headphones a chance to show off their ability to rock out, handling the lower mids and bass regions with aplomb.

We then moved to Maceo Parker‘s Children’s World, a jazzy piece that has drums, strings, and of course, the sax worked in, each instrument was rendered beautifully. It’s a live piece, and the headphones manage to image them all nicely while capturing the cheers of the crowd.

These are certainly musical headphones, but how do they do with games and movies?

To find out, we fired up a copy of Suicide Squad and jumped to the battle scene on the streets. The Mobius does a good job picking up all the sound effects with good realism like footsteps and shattering glass as the fight ensues. And there’s certainly more than enough bass kick for you to feel explosions. However, at times the 3D Surround feature can act against you, as we found instances where we turned to the side and back, and found ourselves stuck with audio coming from the “wrong” direction.

Pressing the 3D button again solves this by centering audio to your head’s current orientation, so it’s easily rectified, but it does somewhat diminish the illusion of being in the action when this hiccup occurs. Thankfully, this doesn’t happen very often, so movies are quite enjoyable.

You’ll love using these for watching sports too, as the 3D effect really makes you feel like you’re right there in the stands. With other headphones, the cheers and clapping of the crowd is generally an indistinct murmur, but the Mobius manages to give them life.

Likewise with gaming, we tried the Mobius with an older copy of Final Fantasy VIII and were impressed from the intro scenes. The way the headphones rendered the airships flying around really made it seem like we were surrounded by speakers in a movie theatre. There’s also a good sense of realism thanks to the naturalness of the Mobius. However, the lag issues described earlier were compounded by sometimes inconsistent audio levels, taking away from the experience somewhat. 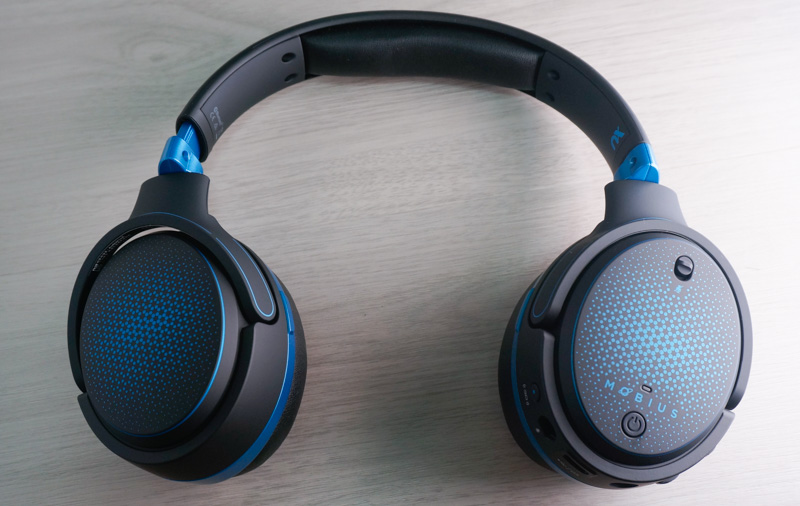 Overall, we’d say that this is a quality set of headphones that work well in all situations – whether it’s movies, music or gaming. The 3D effect isn’t without issues (but that is to be expected of all emulation) and it does generally give you fuller sounding audio. Connectivity options are great as you can go wireless with LDAC and aptX, get direct USB audio feed, or use the regular 3.5mm audio jack.

If this preview piqued your interest, the Mobius is now available at all authorized Audeze dealers for S$629.