Another Gap to Fill

Another Gap to Fill

Another gap to fill? Sounds like a familiar story. Back when ATI released their Radeon 4000 series, they had the awesome Radeon HD 4870 and HD 4850, both of which provided excellent performance for their price. A rung below the Radeon HD 4850 was the HD 4670 (the HD 4770 only came later), which meant there was a big gulf in performance for ATI to fill. Enter, then, the Radeon HD 4830, and subsequently, HD 4770.

This time round, ATI is suffering from the same problem they did with their previous generation graphics cards. While there's no doubting the tremendous graphics horsepower of the top tier Radeon 5800 series, the Radeon HD 5700 series, on the other hand, is a little underwhelming. In our tests, we found that the Radeon HD 5770 had problems keeping up with the older Radeon HD 4890, leading us to believe that it was the HD 5770's narrower 128-bit wide memory bus that was the culprit. Because of the Radeon HD 5770's performance, or lack thereof, it created a big price and performance gap between itself and the Radeon HD 5850.

So now to plug this price and performance gap, ATI has introduced yet another member to the Evergreen family, and it is the Radeon HD 5830. 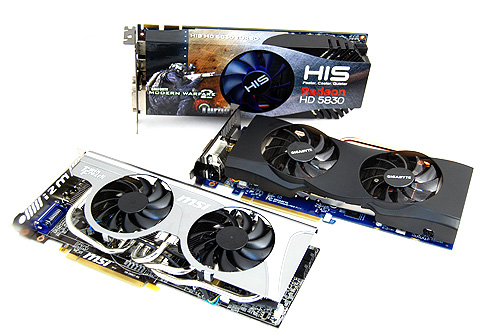 Here's a quick look at how it measures up against its closest rivals.