All about that screen 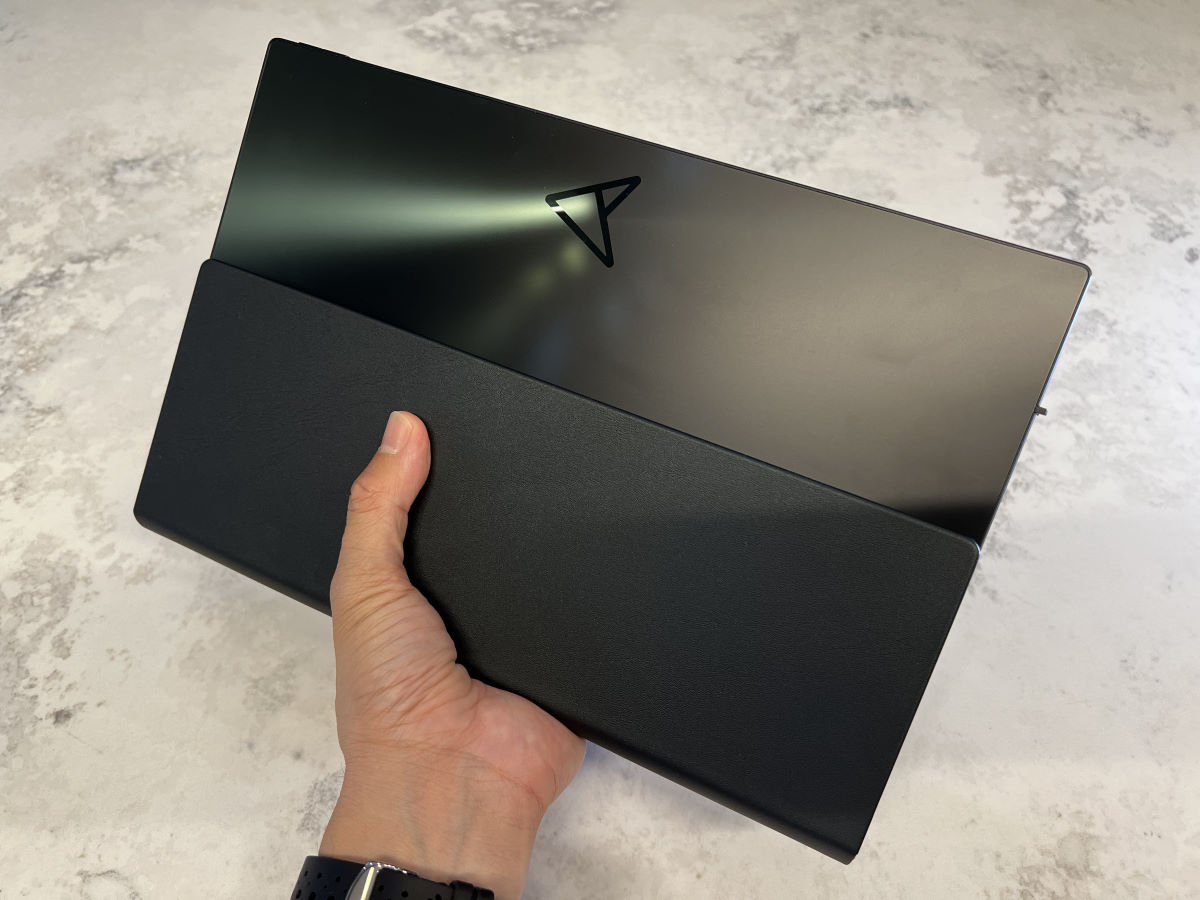 Let’s preface this review by saying that this is the most unique PC experience I’ve had the pleasure of testing. Back in April after the ASUS ZenBook 17 Fold OLED was announced at CES 2022, I did manage some hands-on time with the device, but I’ve got to say that the utility of this format doesn’t dawn on you until you actually use it as part of your day-to-day.

Now, you can probably tell from my introduction that this review will heavily focus on the display and my experiences with it, and I’m here to tell you that it is essentially the singular decisive factor on whether this notebook ends up in your shortlist.

Specs-wise, the ZenBook 17 Fold sits pretty much in the mainstream productivity notebook category. My unit came with an Intel 12th-gen Core i7-1250U processor, 16GB DDR5 memory, Intel Iris Xe graphics and 1TB SSD. On one hand, it is a 12th-gen Alder Lake i7 processor, but on the other hand, it is a low-powered 9W U-series model. There are benefits to this of course. For a computer that can essentially be setup as a 17-inch AIO on a desk, the ZenBook 17 Fold is whisper quiet, even though it has a fan inside for an active cooling system. There was never a time where I heard it whirring. The downside is that you pretty much cannot game with this notebook, despite its glorious OLED display. It handles everything else perfectly well and is actually quite comparable with last year's Tiger Lake Ultrabooks running on an Intel Core i7-1165G7 like the HP Spectre x360 14.

Battery life is commendable for day to day use. ASUS claims up to 9.5 hours with its 75Wh battery. Looping PCMark 10 got me about 5 hours and 40 minutes before it went flat, but in the real world, I have managed to get through a full 8-hour work day of, emails, surfing the web, and (many) lazy YouTube videos in between before the low battery warning prompt came up.

Design-wise, the ZenBook 17 Fold is a notebook with a 17.3-inch foldable OLED display. ASUS is not the first with this concept of course, and comparisons with the 1st generation Lenovo Thinkpad X1 Fold is bound to happen. Moreso, it was an Innovation Award winner for our 2021 Tech Awards. However, while Lenovo was first to market this concept, ASUS refined the experience so that it is finally usable as a day-to-day notebook, rather than a gimmick. Now, this is not to say Lenovo did not do a good job, but it was just the limitations of both hardware and software of the time.

In terms of hardware, Lenovo’s smaller display ultimately affected the X1 Fold’s usability in its folded form. It was just too small and cramped. Windows 10 and software scaling optimisations then were also not ready for such a form factor. So you could say that ASUS spotted the right time to introduce the ZenBook 17 Fold. This notebook unfolds into an impressively large, but not unwieldy 17.3-inch tablet, and folds into a compact, yet very usable 12.5-inch notebook. 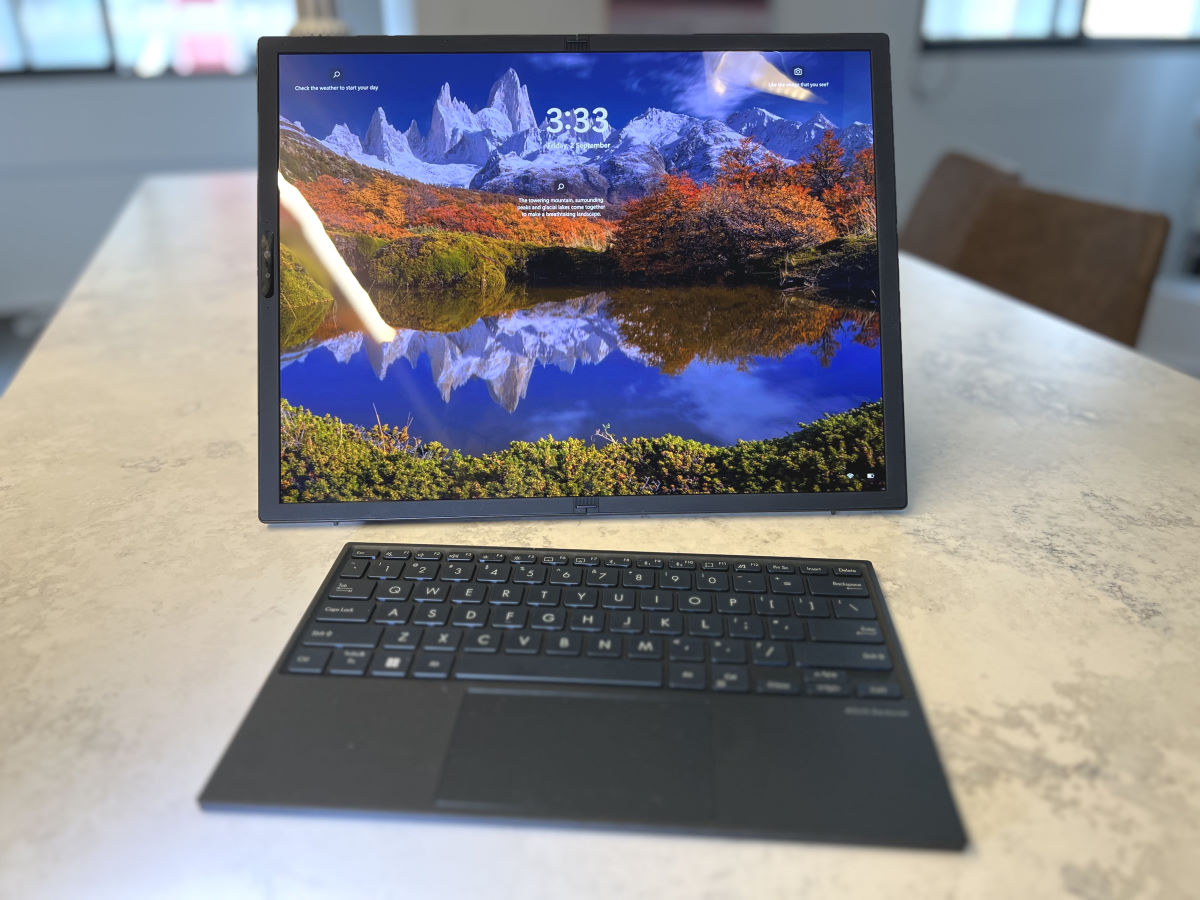 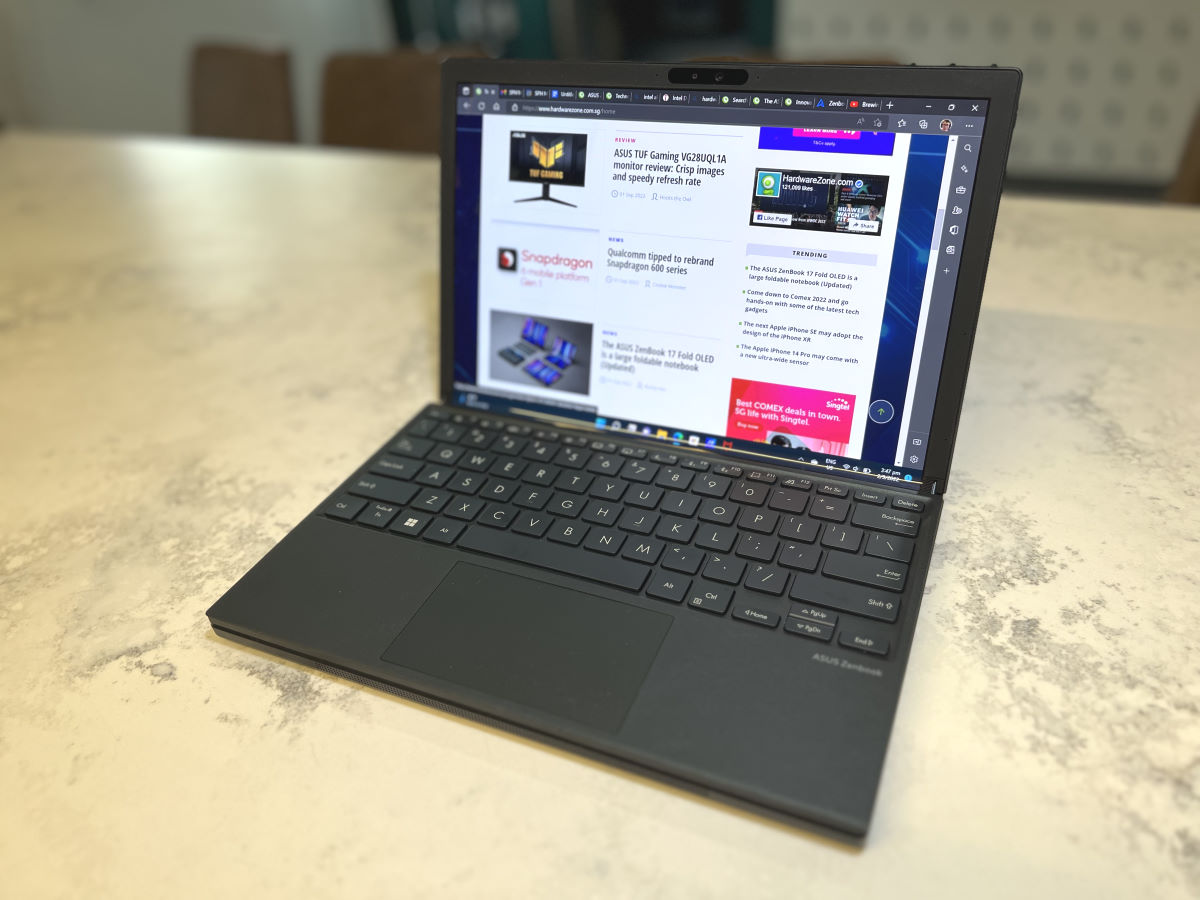 When I first got the ZenBook 17 Fold, I had intended to dedicate a few days each in both modes just to see what the experience was like, but I had not expected to actually spend most of my time in what Asus calls the “Extended Mode”. This is when I have the ZenBook 17 Fold in its notebook layout, but I use the keyboard on the desk instead of on the bottom half of the ZenBook 17 Fold. This way, I have an angled portrait display where I have either one long 3:4 scrolling window–which I am doing right now writing this review–or two 12.5-inch widescreen landscape windows on the top and bottom half of the notebook to multi-task. While many monitors can be rotated into a portrait mode, this angled experience is really unique. I find myself greatly enjoying working on the notebook in this configuration, and the way content ‘flows’ from the bottom up as I’m reading a website for example, is very soothing. 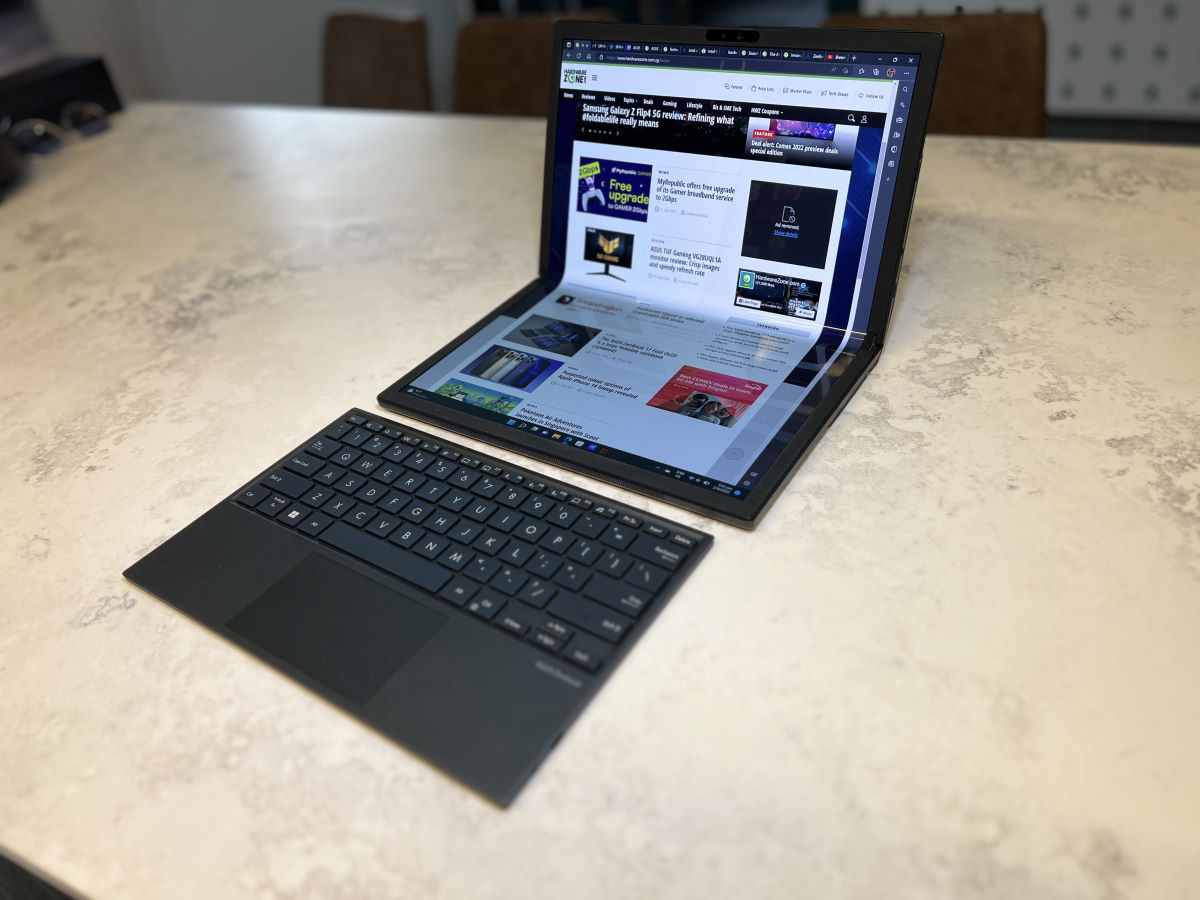 In terms of software scaling, ASUS seems to have done a decent job with the notebook recognising the orientation it’s in, and whether the keyboard is snapped on, which disables the bottom half of the screen. Running on Windows 11, I had no problem moving and snapping my windows into the top and bottom quadrants as well, if I wanted to custom the look. 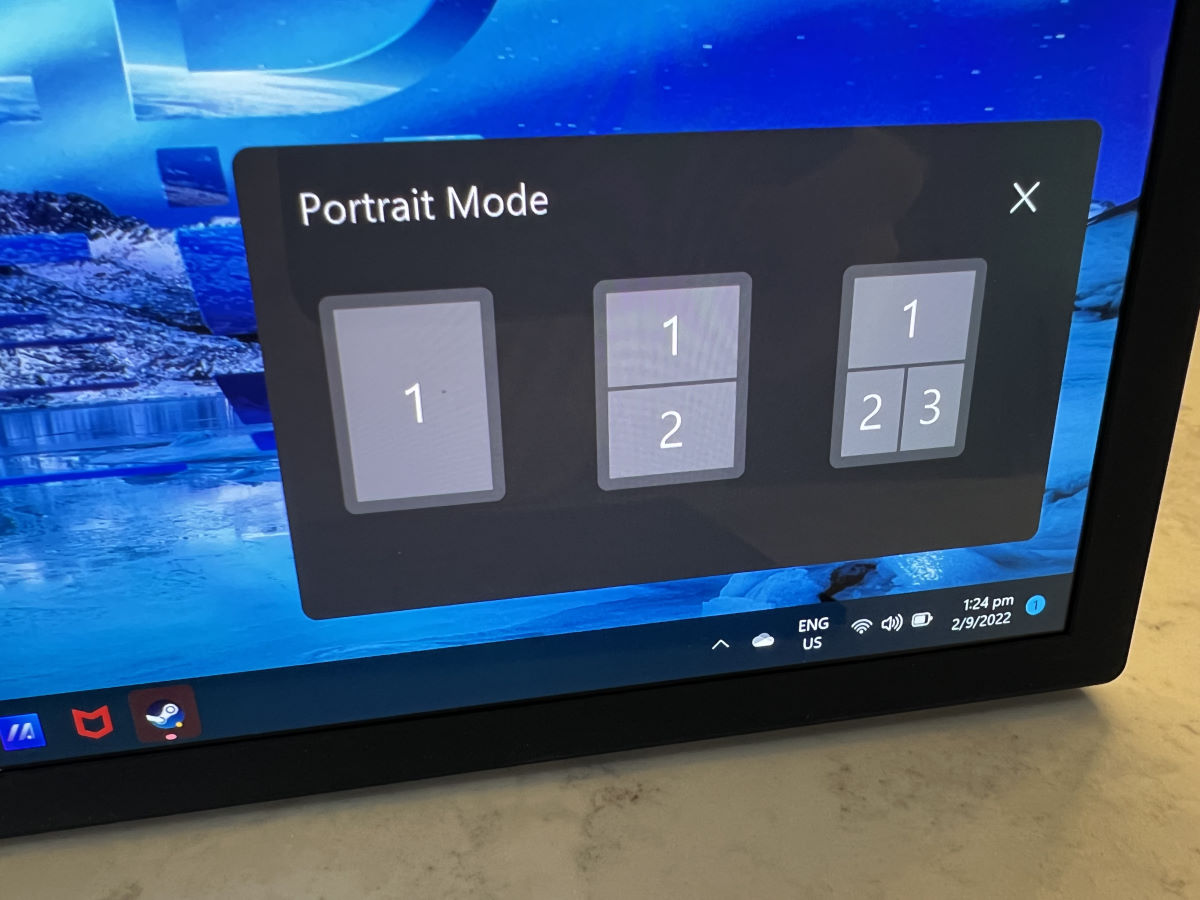 Image quality on the ZenFold is amazing. We’ve spoken much about ASUS going all in on OLED for many of their notebooks, even their mainstream range, and this is true for the ZenBook 17 Fold as well. You’ve got a 2,560 x 1,920 pixel display with a nice 4:3 aspect ratio for productivity work, VESA Display HDR True Black 500 certified, with 100% DCI-P3 colour gamut coverage and is Pantone validated. Just let it be known that because I have been using the notebook heavily in Extended Mode, I did notice reflection and colour banding on the bottom display, which is due to the protective film and glossy nature of the display, and not a panel issue. Viewing the ZenBook 17 Fold straight on as a standard display, there were no such problems. 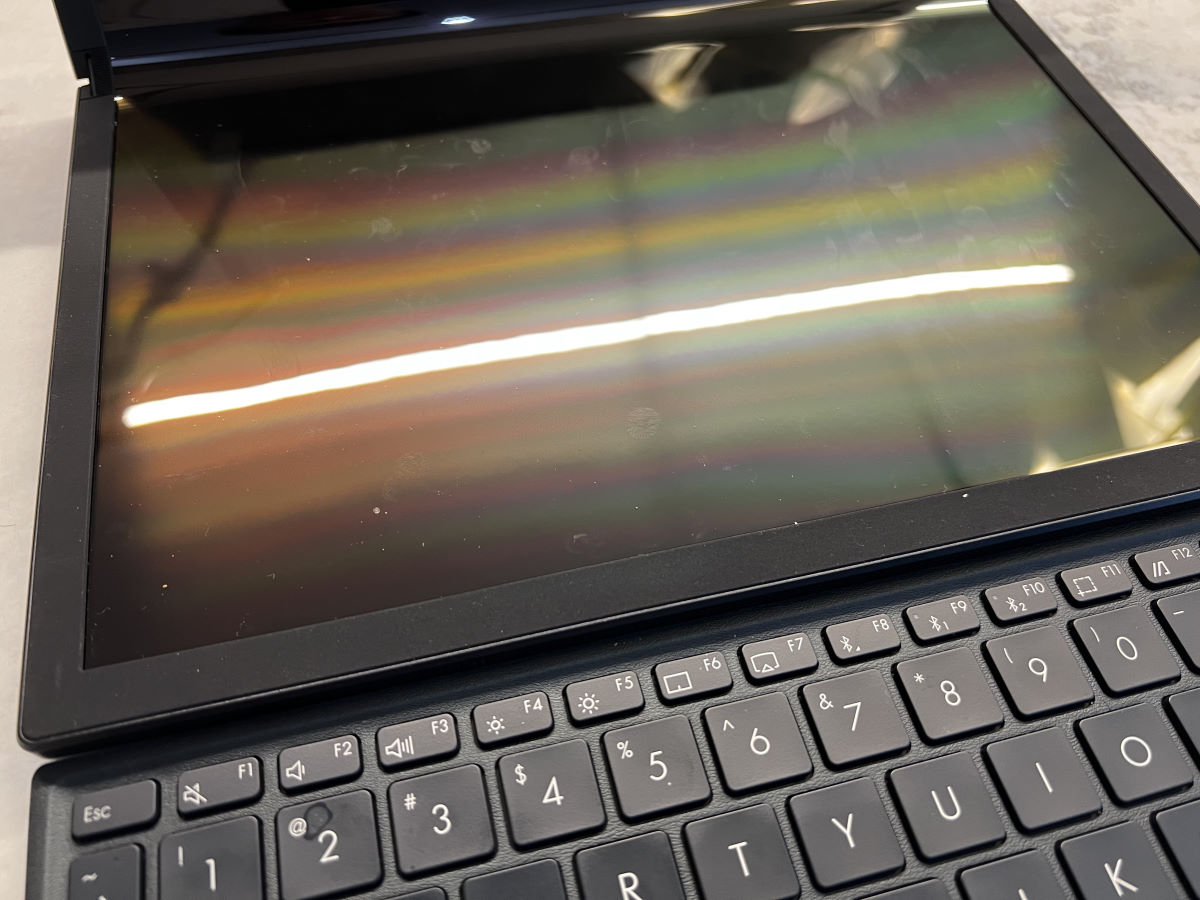 Now let’s address the ‘crease’, the bane of all foldable devices. ASUS has done a pretty good job with the ZenBook 17 Fold. Due to the size of the panel and wider angle of the fold, the crease is less of a line in the middle, and more of a wide ‘bar’ that’s spread out and less pronounced. It is practically unnoticeable when you’re doing anything with the notebook, though you can feel it by touch when the screen is fully unfolded. 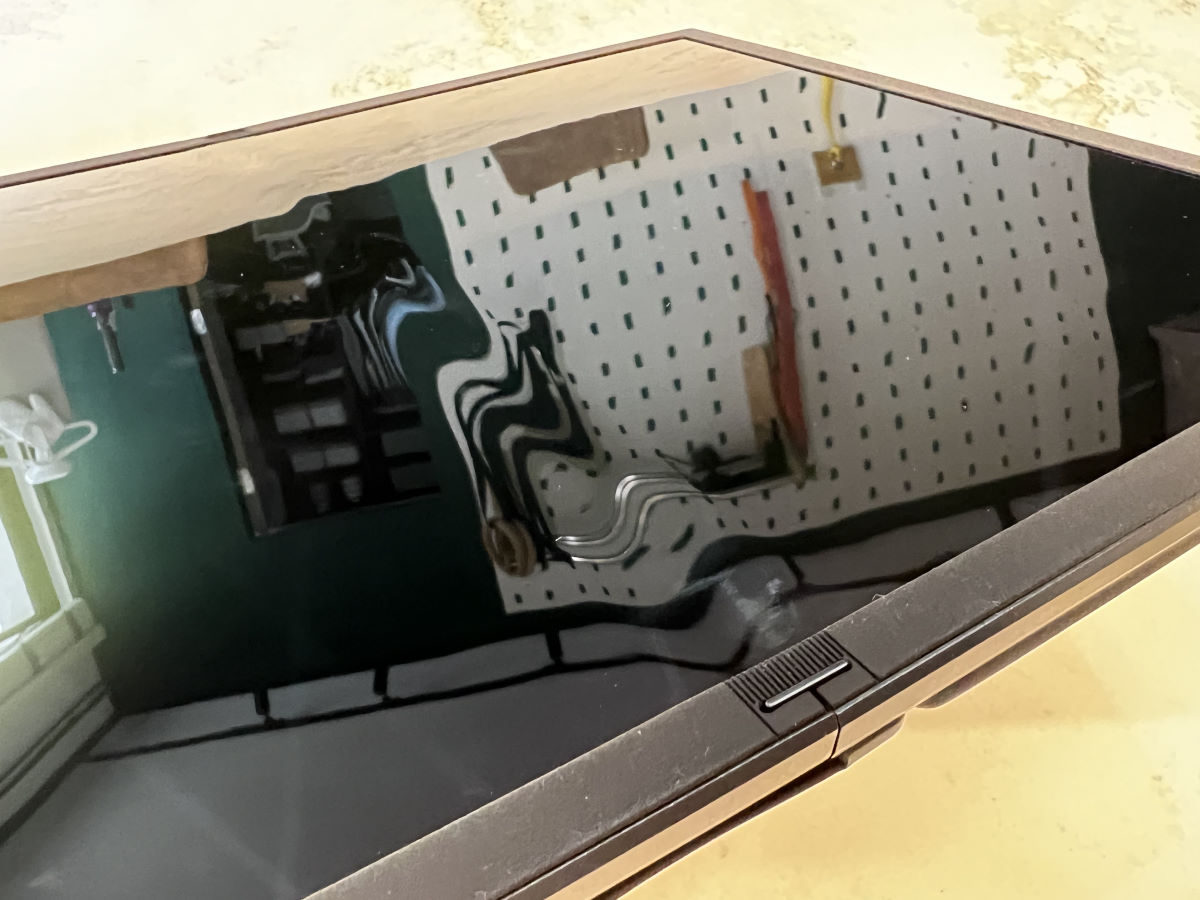 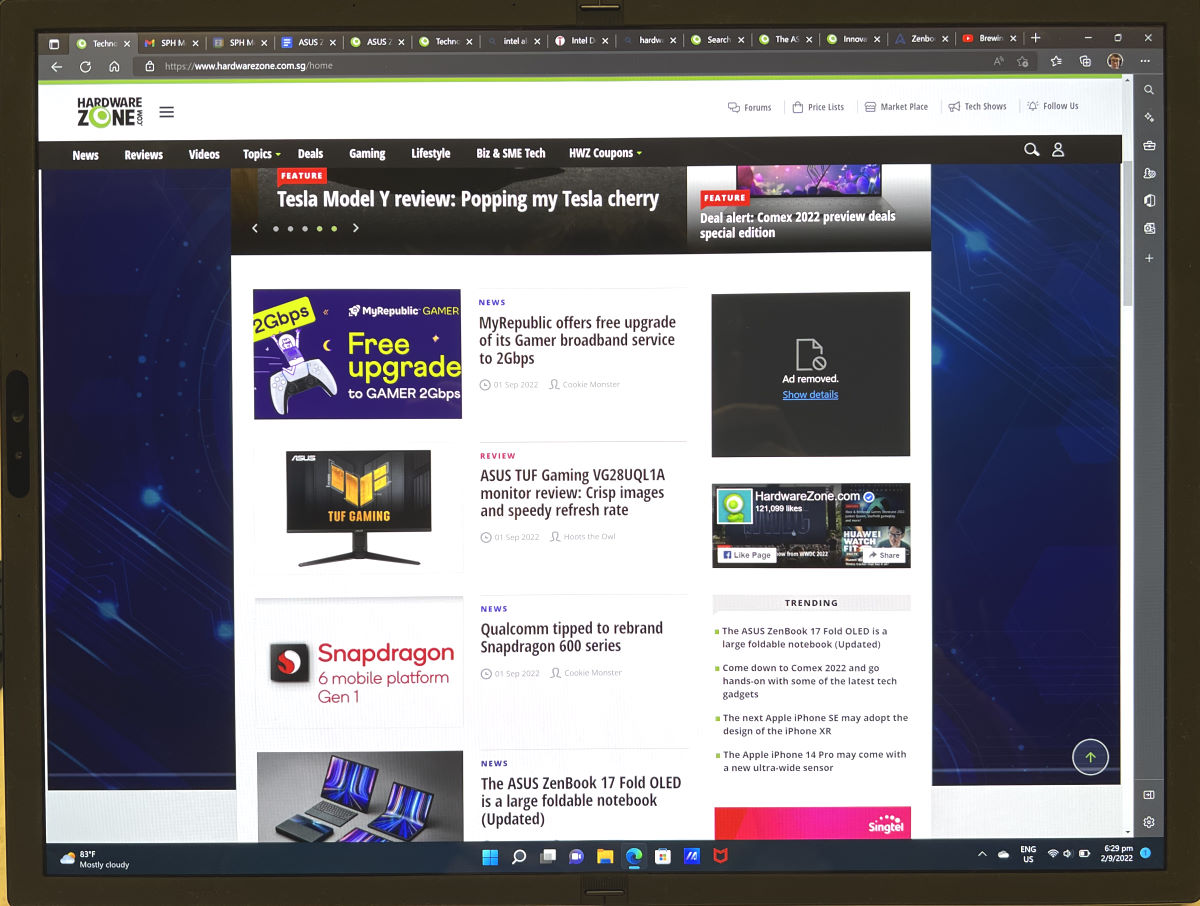 The notebook has a 87% screen-to-body ratio so the bezels might look slightly thicker when compared with modern flagship notebook displays. However, I have found the extra bezel space to be very helpful when unfolding the notebook. Too many times have I found my thumbs pressing directly on the display when unfolding that I’m now quite conscious about it.

The last thing to note is that even though the ZenBook 17 Fold has a touchscreen display, it is not compatible with any type of digital smart pen, and this seems to be a limitation of the panel in this size according to ASUS. You can use those unpowered, soft-top rubberised styluses though.