Going on a Rampage IV a Good Cause

The ASUS Next Generation Motherboard Technical Seminar was held last week and we were given a sneak peek of their offerings based on the Intel X79 chipset. To date, this is one of the closest encounters we have had with X79 boards with a great deal of technical expertise shared. Our previous encounters, at Computex 2011 and more recently in the Intel Developer Forum 2011, were brief and distant. And more recently, we've covered one of MSI's top boards, the X79A-GD65 (8D) with what we know of the new processor to-date. ASUS has given the green light on the 26th October to share intimate details of their next generation motherboard gems that we've uncovered at the technical seminar and we start our coverage with their ROG edition.

Wearing the familiar red and black colors of the Republic of Gamer’s coat-of-arms, the ASUS Rampage IV Extreme is the latest addition to this lineage from ASUS that is known for its innovative hardcore hardware for truly dedicated gamers and OC tweakers. Similar to some of the other high-end X79 motherboards we have seen, the Rampage IV Extreme sports 8 DIMM slots - two pairs of DIMM slots on each side of the massive LGA2011 CPU socket.

This arrangement is due to the fact that Sandy Bridge-E processors support quad-channel DDR3 memory. With eight DIMM slots on this board, it would mean each memory channel interfaces with each pair of DIMM slots. According to the board’s manual, the supported memory tops at a maximum of 64GB and is able to interface with OC memory modules of clock frequencies up to 2400MHz. 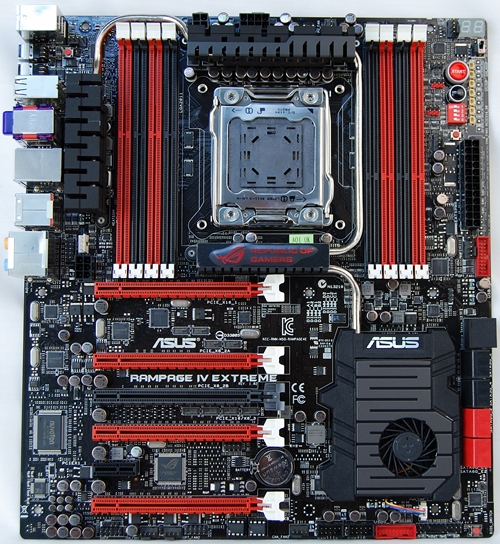 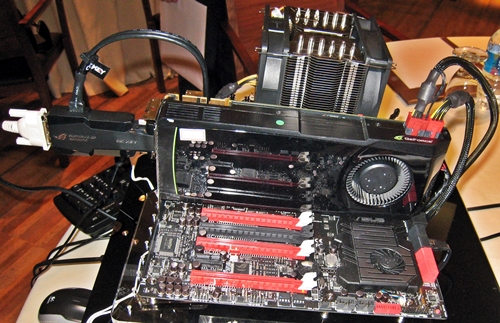 This board is packed with forward-looking features and the engineers were thoughtful to feature an X-socket bracket that will fit a LGA1366 CPU cooler as well as a LGA2011 one. It also allows the mounting of an LN2 Pot for extreme cooling with liquid nitrogen. 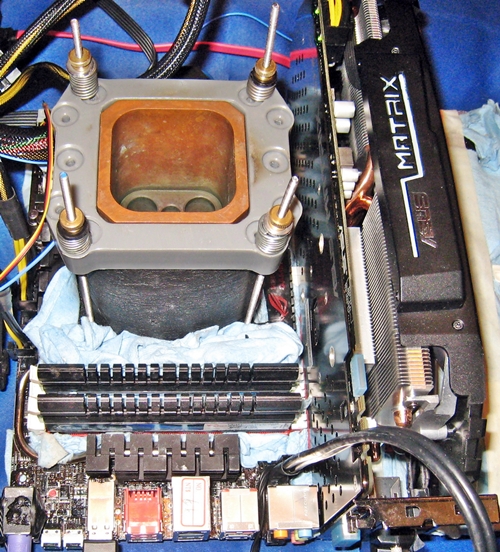 Besides keeping things cool with such extreme measures, the heatsinks covering the MOSFETS and overhanging the black metallic caps are connected by silver heatpipes, terminating at the 'heart' of the board - a heatsink embossed with the ROG logo as well as its series title.

Such seemingly ostentatious display of power control and cooling features serves to remind us of the target audience of the board - the power users and extreme overclockers.

Zoning in on the Rampage Extreme IV

One of the highlights of the board is the OC Zone offers a plethora of buttons, connectors and LED indicators for these users to fine-tune performance when working on a bare or open-case system. 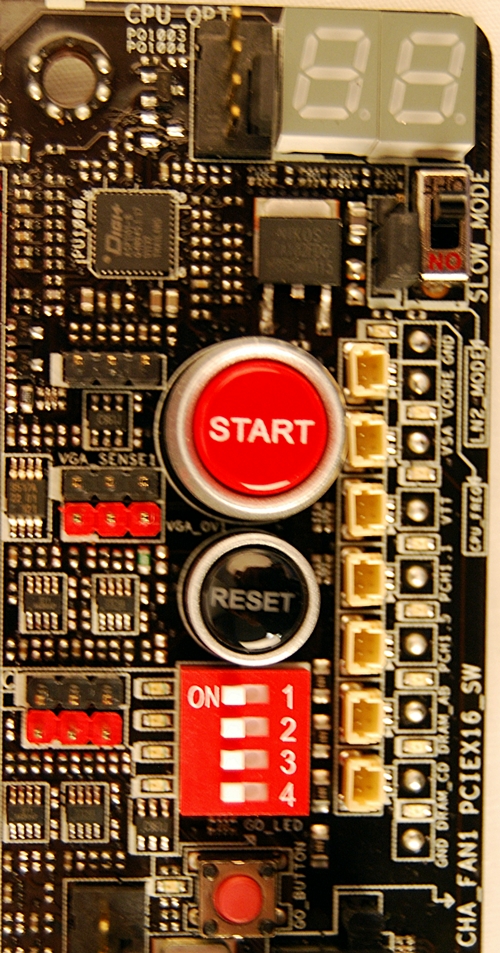 In the Zone, besides the usual power and reset buttons, the PCIe lane switches (the red DIP switch block) located below the black Reset button allow you to enable or disable the corresponding PCIe x16 slots for troubleshooting graphic cards without removing them from their PEG slots; a simple and thoughtful feature.

Flanking the PCIe lane switches and buttons on the right are the Voltiminder LEDs which provide debugging LEDs as well as many measurement spots for various voltage measurements. On the left flank are on-board headers (red and black plastic rests) for accurate measurement and overvolting of graphic cards.

Thinking Outside the Board - the OC Key

The OC Key is an exclusive piece of equipment that sits in-between your graphics card and display monitor. Using on-screen display (OSD) technology to control and monitor overclocking and basic BIOS matters, the OC Key attaches a transparent, graphical overlay on the original screen output and provides an informative menu to enable OSD TweakIt and OSD Monitor. 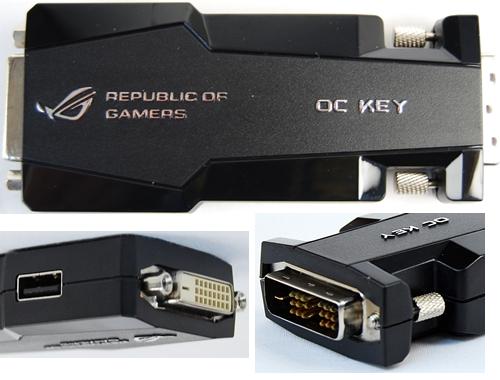