Here's a full list of the notebooks I tested:

How good are they in daily computing tasks?

The ROG Zephyrus S GX701GX came ahead in PCMark 10 Extended, largely on the back of its strong performance in the Gaming and Digital Content Creation benchmarks. The smaller Zephyrus S GX531GX wasn't that far behind though, and there was just a 3 per cent differential between the 15.6- and 17.3-inch notebooks.

In PCMark 8's Storage benchmark however, the QLC NAND SSDs in the Zephyrus S GX531 models couldn't really keep up in terms of storage bandwidth. 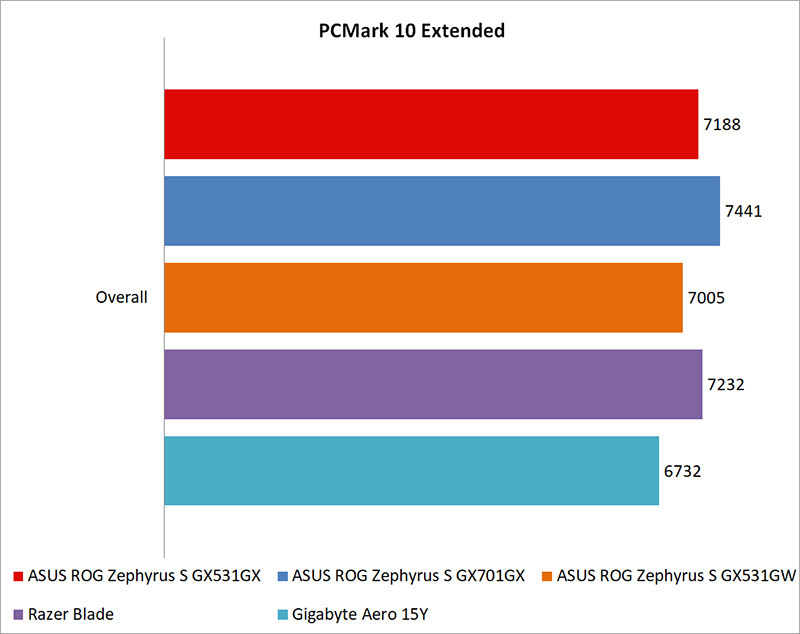 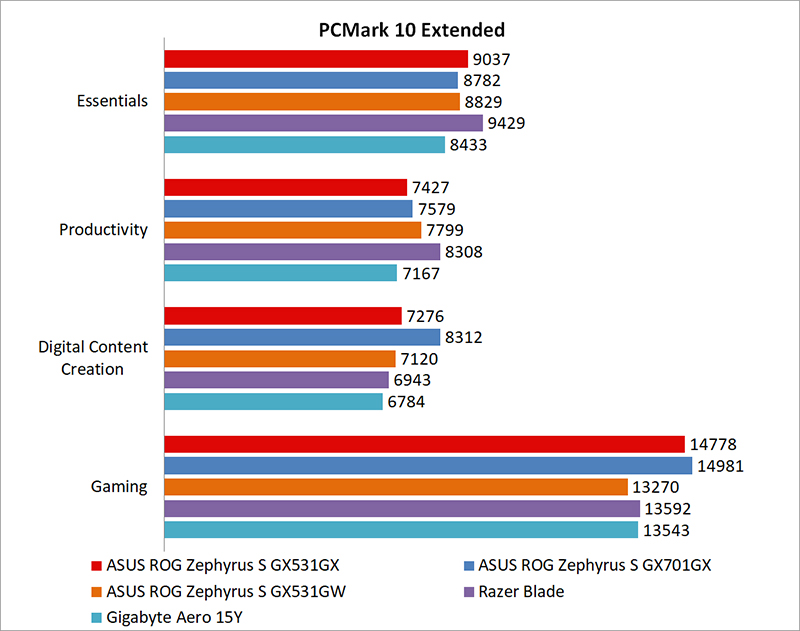 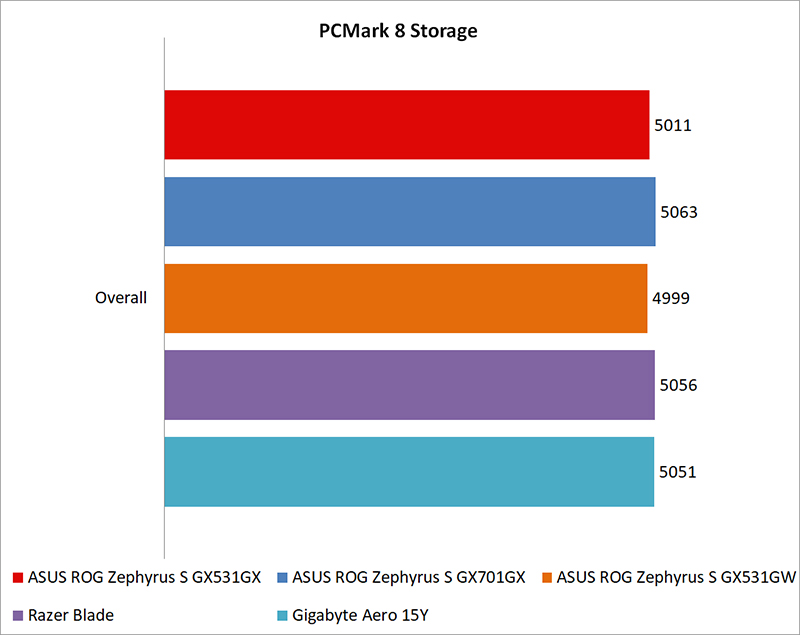 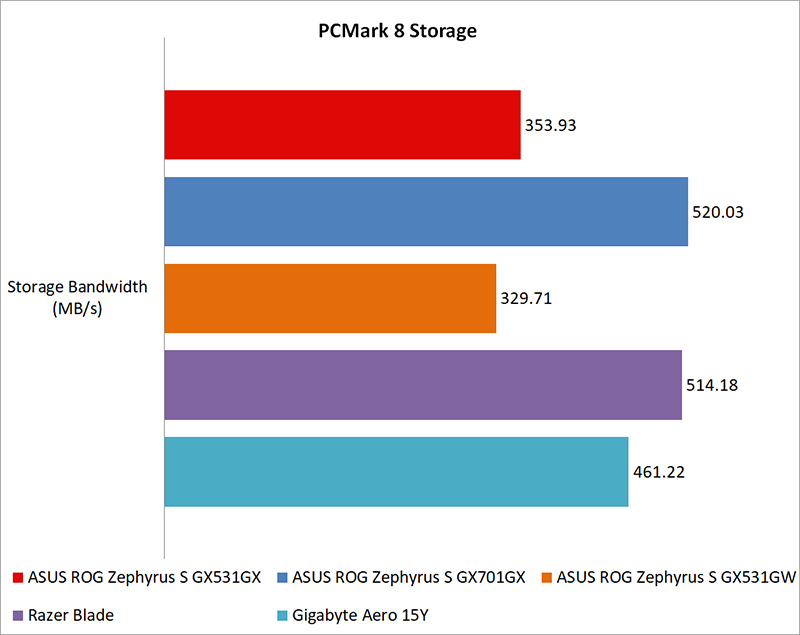 In the case of the Zephyrus S GX531GX and GX701GX, they're pretty evenly matched, but it's clear that the 17.3-inch laptop has a small edge over its smaller sibling. In Deus Ex: Mankind Divided, the gap was as large as 8 per cent at 1080p and High settings. 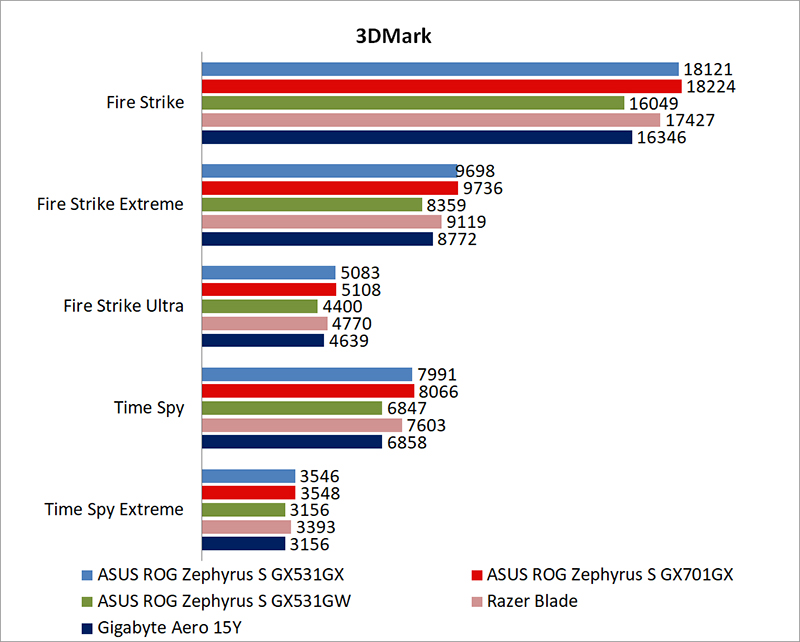 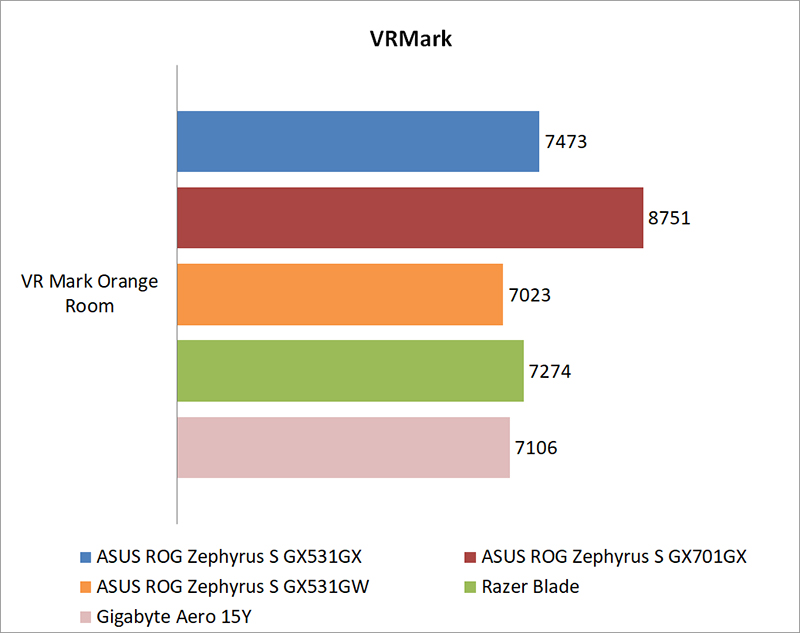 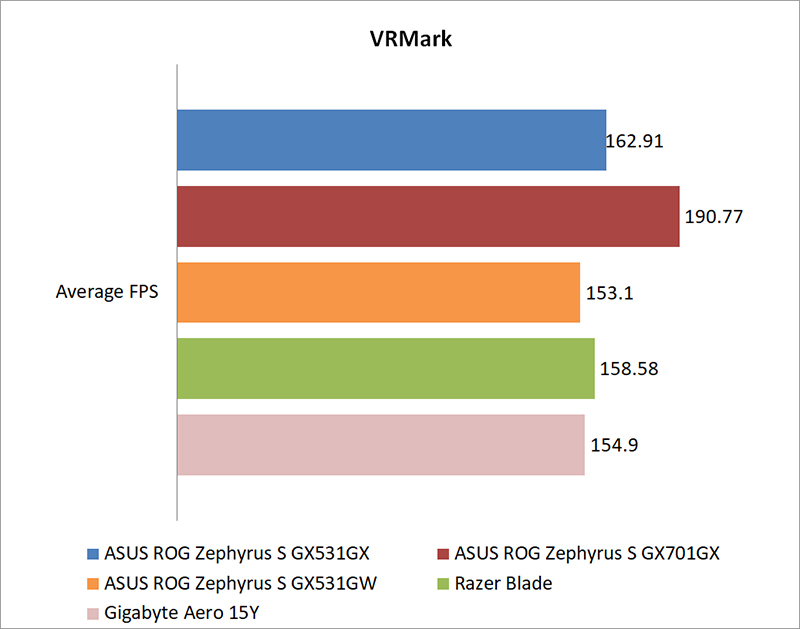 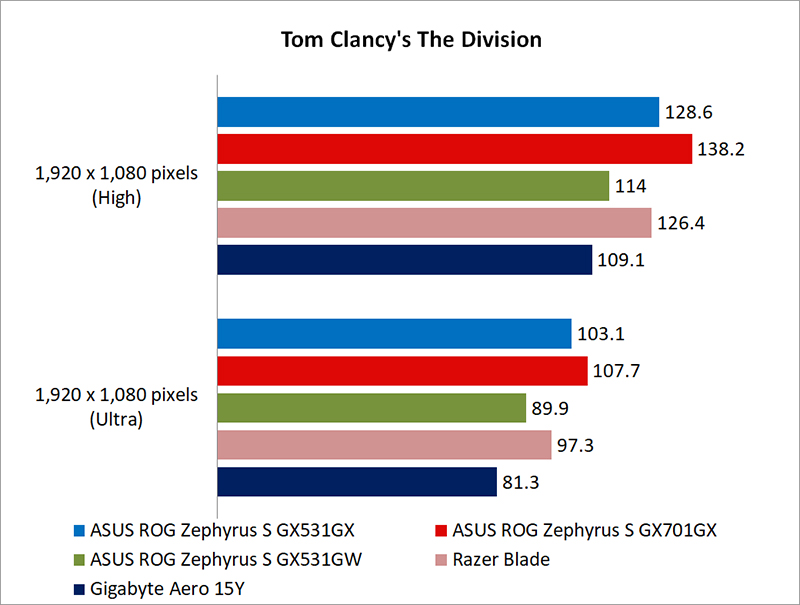 How is the battery life?

Battery life was sort of a mixed bag here. The Zephyrus S GX531GX did pretty well, despite its relatively small 60Wh battery. It still isn't as good as the Razer Blade or Gigabyte Aero 15Y, but the latter two had much larger battery packs. In fact, a look at the power consumption figures show the GX531GX to be the more efficient laptop. Still, I'd really have liked to see ASUS cram a larger battery in here.

On the other hand, the GX701GX didn't even make it to the two-hour mark, and it had the highest power consumption of the lot. It even had a larger 76Wh battery and very similar specifications to the GX531GX.

Part of the reason is probably the higher GPU clock speeds, and it could be that ASUS decided to prioritize performance over battery life for the larger 17.3-inch model. That said, there's just one quirk in our review unit I have to point out. I mentioned earlier that the GX701GX is supposed to have a GPU switch that lets you toggle between Optimus and G-Sync modes in the Armoury Crate software. Unfortunately, this option was nowhere to be found in our version of Armoury Crate, and I was also unable to get the software to update to the latest version.

This means that it's not clear which mode the laptop was running in, and if it so happens to be G-Sync mode, it's possible that battery life could improve once Optimus is enabled. I've already reached out to ASUS on this issue, and will update these benchmarks if it turns out that this is a bug on the software end.

When it came to the portability index, which aims to be an objective measure of how portable a notebook is after taking into account factors like dimensions, weight, and battery life, the Zephyrus S GX531GX turned out a decent result. However, it was still behind its competitors with larger batteries. The Zephyrus S GX701GX in its current state performed abysmally though, and you'll want to make sure you have the power brick with you all the time. 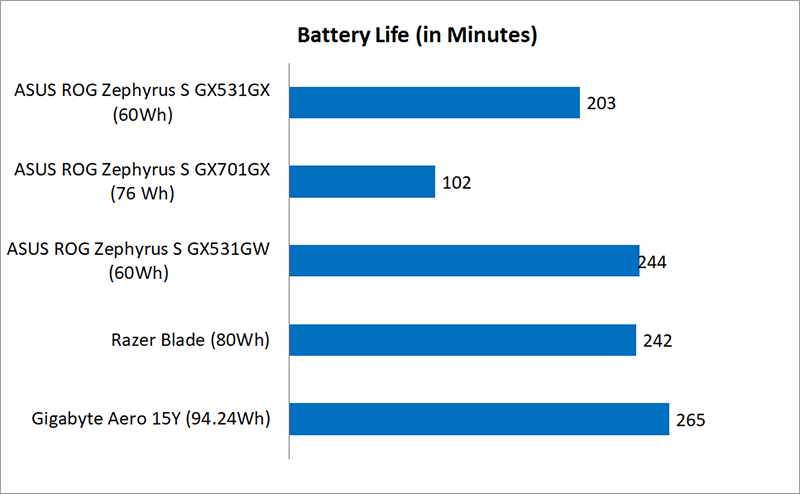 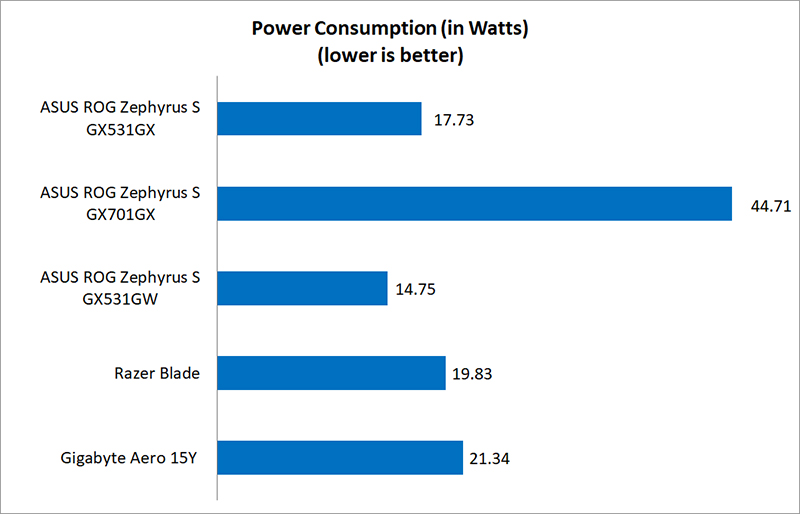 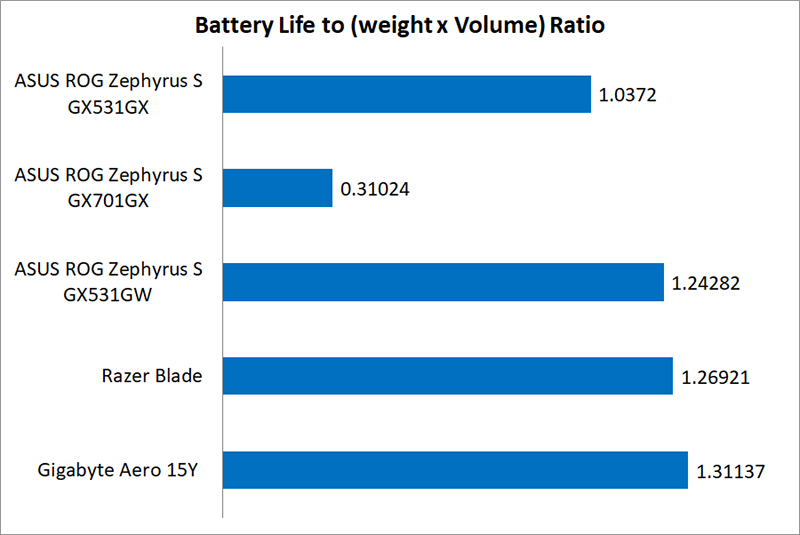 The ASUS ROG Zephyrus S' cooling solution isn't just for show, and it does a pretty good job of keeping the crucial components running cool while preserving the laptop's slim form factor. Surprisingly though, CPU temperatures on the larger Zephyrus S GX701GX were much higher than that on the GX531GX.

Compared to the GX531GX, the GX701GX was also a tad bit quieter, although both notebooks still can be considered quite noisy. It's definitely not the worst I've encountered though, and I'd consider these noise levels pretty par for the course. 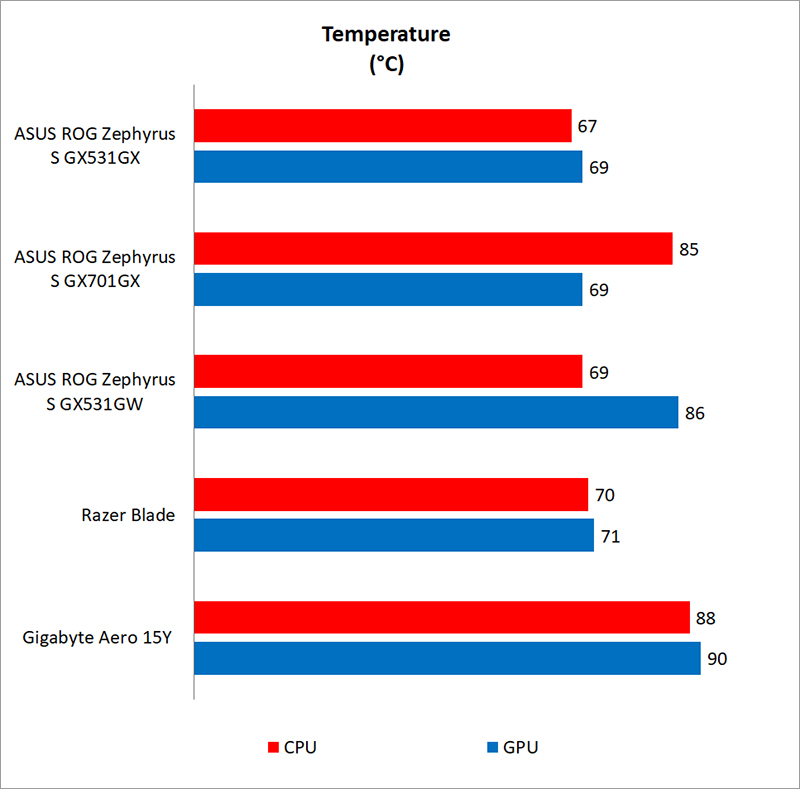