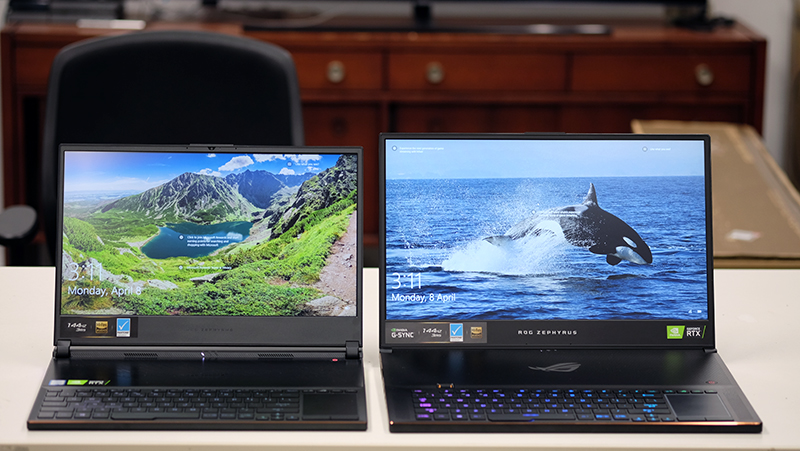 The displays on both laptops are pretty good, featuring bright and vibrant colors and excellent viewing angles. According to ASUS, they've also been validated by Pantone and cover 100 per cent of the sRGB color space, which should signal more accurate colors. In practice, I have few complaints with either screen, and when set beside something like the Lenovo Legion Y740, it became quite apparent that the latter skewed toward the cooler end of the color spectrum.

Both laptops come equipped with a 1,920 x 1,080-pixel AHVA display and native 144Hz refresh rate, so gameplay should feel super smooth and fluid. In addition, ASUS is claiming a 3ms gray-to-gray response time for reduced motion blur. However, the 17.3-inch ROG Zephyrus S GX701GX has a leg up over its smaller sibling with support for NVIDIA's G-Sync variable refresh rate technology, which further eliminates tearing and stuttering. 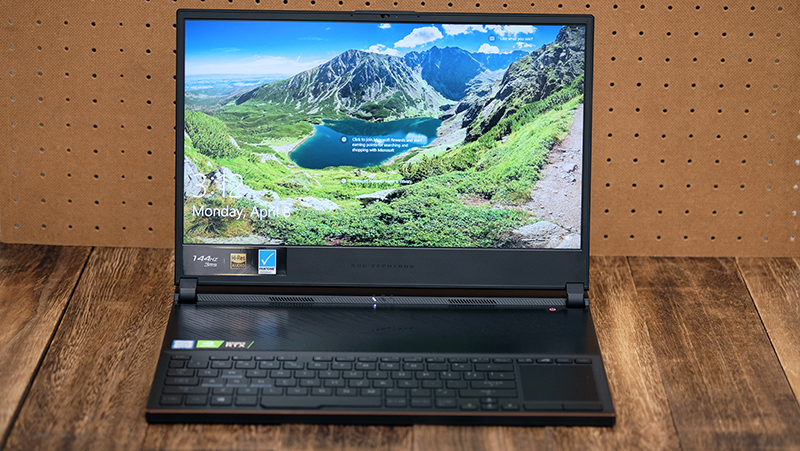 That said, the benefits of G-Sync are most apparent at lower frame rates and refresh rates, such as a laptop with a 60Hz refresh rate and a less powerful GPU. Both Zephyrus S laptops are equipped with a GeForce RTX 2080 Max-Q, and the high refresh rate means that each frame stays on screen for a shorter time, so problems like tearing and stuttering become a lot less apparent. As a result, I don't think the inclusion of G-Sync on the GX701GX makes a super big difference in terms of gameplay.

Both laptops also feature super slim bezels on three sides, which helps reduce the overall footprint of the notebook. Unfortunately, they still have rather chunky bottom bezels, so they don't look quite as sleek as they could have been. However, if you look across the competition, there's no real leader in this design aspect, so ASUS has probably managed the best it could at this point of time. 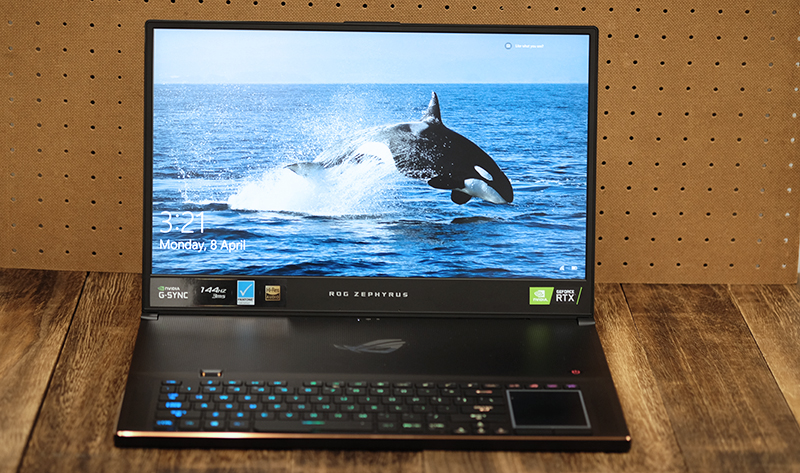 The GX701GX also diverges from the GX531GX when it comes to the webcam. While the latter crams a 720p webcam into the top bezel, which seems serviceable enough, the GX701GX doesn't have a built-in webcam at all. Instead, ASUS has opted to include an external webcam that can deliver 1080p video at 60fps. This webcam can be mounted onto the display or on its stand on your table, and it also allows for adjustments that can help you get the best angle. 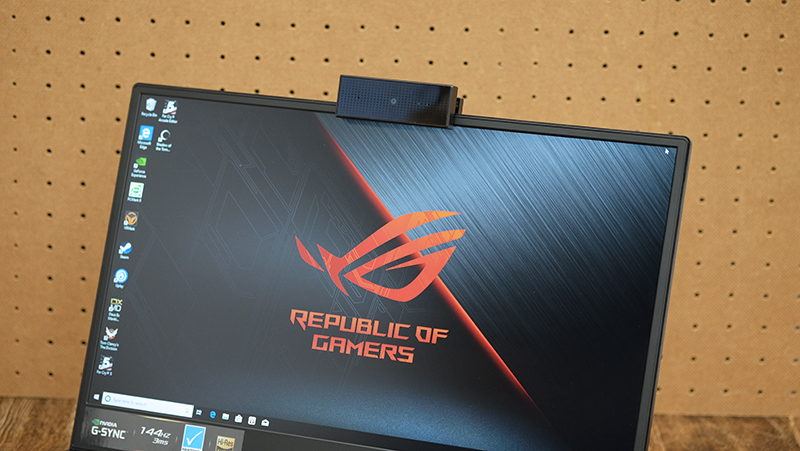 This is probably most useful for streamers for whom video quality is important, but I think folks who just make the occasional video call won't get much utility from it. Instead, they'll probably find it a hassle to have to plug in the webcam and mount it.

Both laptops share the same design language, but the bigger GX701GX actually looks more similar to the original Zephyrus GX501 in some respects. For example, the GX531GX uses a new scissor-door hinge that allows the display to open up like a gull-wing door. However, the hinge on the GX701GX looks like the older one on the GX501. That said, the display appears to have a greater range of motion than on the GX531GX, although it wasn't by much. 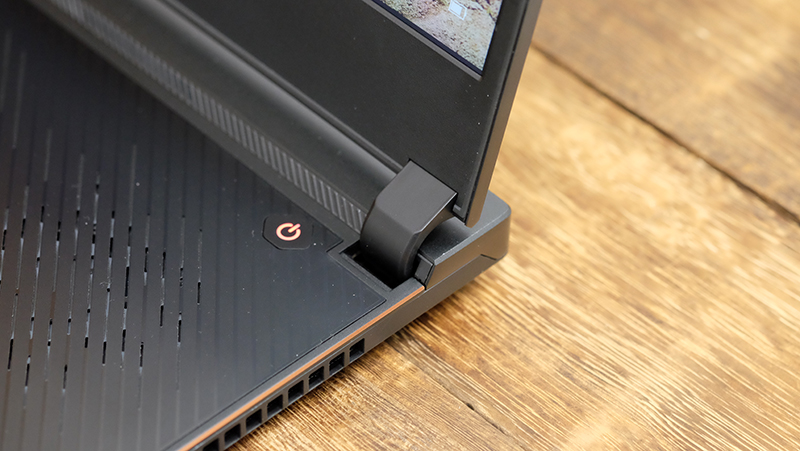 Either way, you won't be able to lay the lid anywhere close to flat on the Zephyrus S laptops, probably due to how the lid and the bottom panel work in tandem. To improve cooling, the bottom panel cracks open when the lid is raised, providing an additional outlet for air intake. 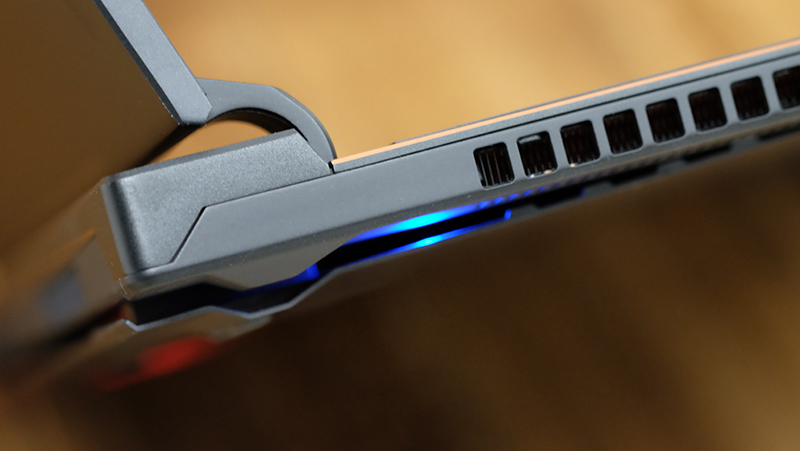 The top intake vents on the ROG Zephyrus GX701GX also more closely resemble those on the GX501, taking the form of a pretty plain grid of dots. Conversely, the GX531GX adopts a new and more attractive design featuring diagonal slits. 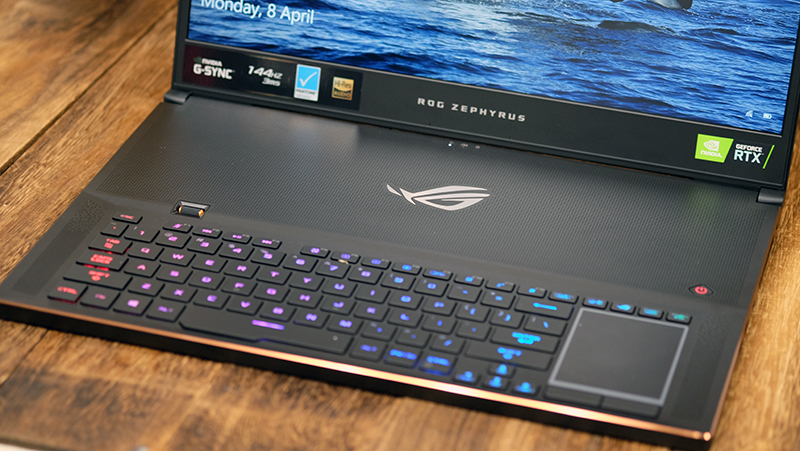 Still, ASUS has paid a lot of attention to design here, and both laptops use a magnesium-alloy chassis that is both strong and light. The combination of brushed metal and matte surface finishes convey an impression of sophistication, and the diamond-cut edges have also been colored the company's signature "plasma copper". Build quality is solid, and there's barely any discernible flex to the body. However, the vents above the keyboard naturally mean that the area isn't as rigid as it could have been, but it's nothing I would worry about. 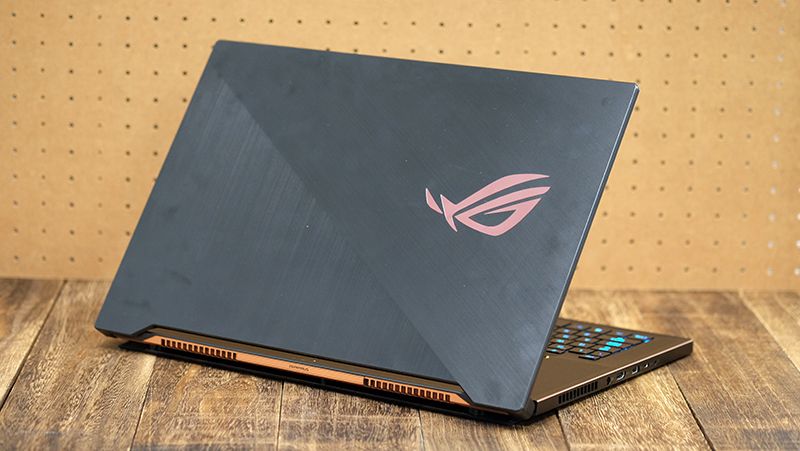 The keyboard on both notebooks are the same, offering the same 1.4mm key travel distance. The Windows Precision Touchpad also sits on the right, and you can toggle the digital number pad with the push of a button. I've always found this to be a pretty creative approach since you get the same layout and benefits of a full-sized keyboard while saving space. The trackpad is a bit narrow, but you're probably going to be using a mouse most of the time anyway. 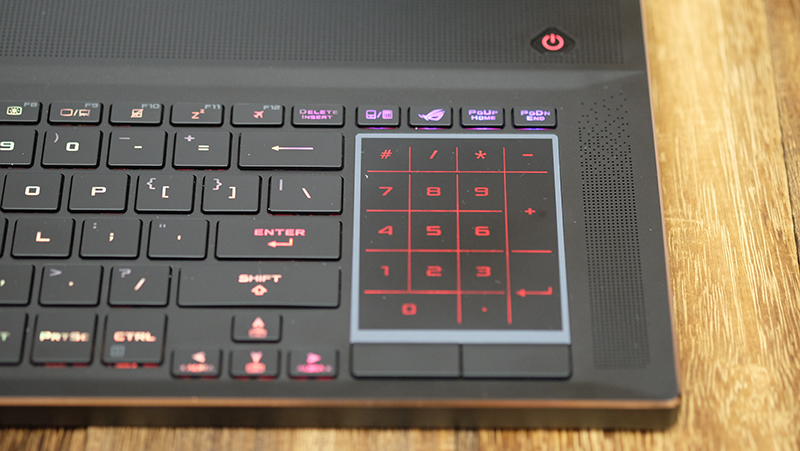 However, the ROG Zephyrus S GX701GX actually supports per-key RGB backlighting customizations, but the GX531GX is limited to just four independent zones. In addition, the backlighting on the GX701GX is noticeably brighter than that on the GX531GX, where it's barely perceptible under bright overhead lighting. Unfortunately, both notebooks exhibit uneven backlighting across some of the larger key legends, which can be a bit of an eyesore. 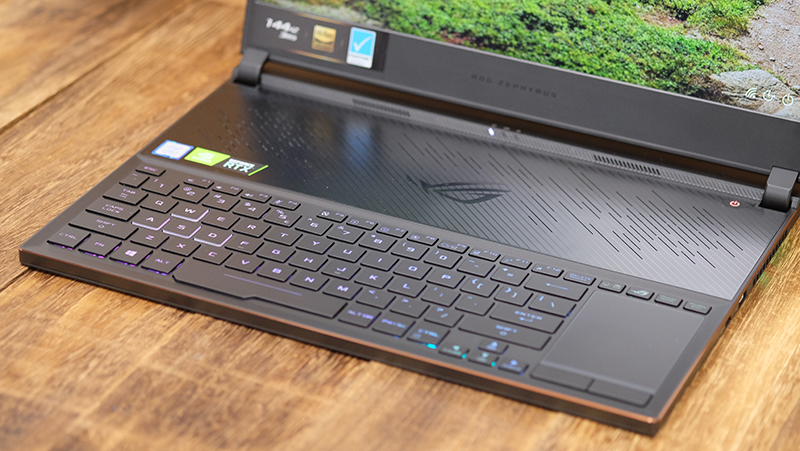 The speakers on the GX701GX are slightly better as well. The dual 2.5W speakers flank the keyboard and pump out surprisingly loud and full-bodied sound. I think gaming laptops have managed to include pretty decent speakers in recent years, but there are still many that sound thin, reedy, and shrill. Fortunately, the Zephyrus S isn't one of them, and lows and mids are pretty rich for a notebook.

In addition, there's a dedicated volume wheel above the left-hand side of the keyboard. I don't really find this a necessity, but it definitely is a convenient and pleasantly tactile way to make volume adjustments.

On the other hand, the GX531GX features less powerful 2W stereo speakers and no volume wheel. They're also situated further back, sitting just below the display. The speakers aren't bad, but the mids did seem less lush and the overall sound was also more prone to distortion at higher volumes.