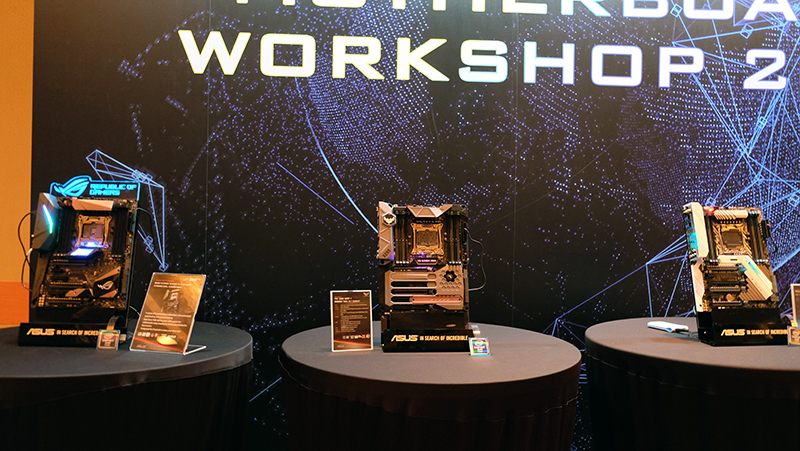 The new boards are based on Intel’s LGA 2066 socket, and the chipset features an upgraded DMI 3.0 link from the processor and 20 to 24 lanes of PCIe 3.0 in varying configurations, compared to the 8 PCIe 2.0 lanes on X99. This means board makers won’t have to draw on the CPU’s PCIe lanes (up to 44 lanes), and they’re freed up to go to town with greater functionality.

As a result, you’ll see things like additional SATA and networking ports, including 10G networking. This is also helped along by the implementation of HSIO lanes (carried over from the consumer Z270 chipset), which allows for greater flexibility.

The release of the successor to X99 and Intel’s shiny new Kaby Lake-X and Skylake-X chips are intended to spur a new round of upgrades from enthusiasts, and the new ROG boards are bristling with robust overclocking and cooling capabilities, dedicated headers for custom liquid-cooling loops and AIO coolers, and new lighting effects and storage features.

On top of that, select models also boast support for 802.11ad wireless technology, or WiGig. While the technology still isn’t that widely used, ASUS says it wants its users to be ready for the future. 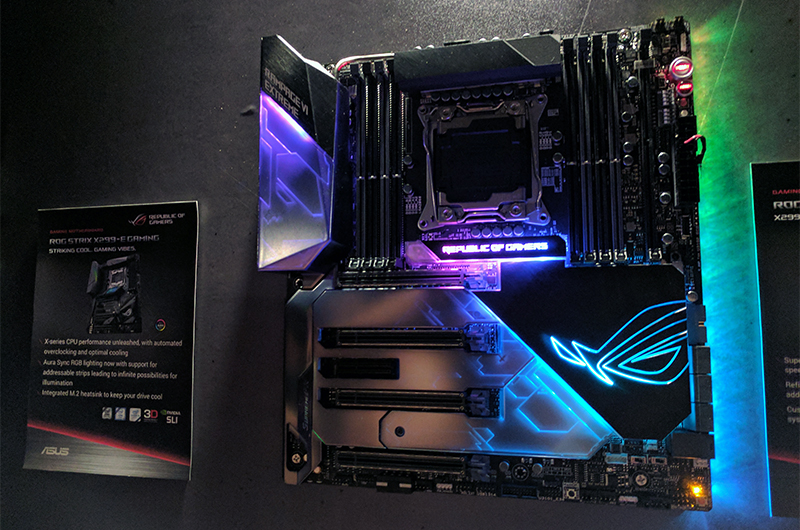 The ROG Rampage VI Extreme sits at the top of the new X299 family. Designed expressly with custom liquid-cooling in mind, it has the usual plethora of fan and pump headers, including dual flow headers to monitor the flow of coolant in your loop.

It also supports the latest 802.11ad wireless standard (the only ROG board to do so), and is equipped with an onboard 10G chip for the fastest connections.

In addition, you can install up to three M.2 SSDs, and there is a U.2 connector for enterprise-grade PCIe SSDs as well. One interesting addition is something ASUS calls DIMM.2, and two of the M.2 sockets are actually mounted on a separate daughterboard that fits into an extra slot adjacent to the real DIMM slots.

This is a modified DDR4 slot that is wired directly to the PCH, and it will not support any memory modules.

ASUS actually went with this approach to solve the problem of M.2 throttling, and this allows you to cool the SSDs with a memory cooler or a separate fan installed on the bundled fan mount.

Another standout feature is the LiveDash OLED screen on the I/O cover. It can appear slightly gimmicky, but it will display useful information like system temperature, CPU frequency, and fan speeds. If you’re feeling whimsical, you can even set it to display an animated logo or figure, for instance that of a cute dinosaur, and ASUS says its working on allowing you to add custom animations. 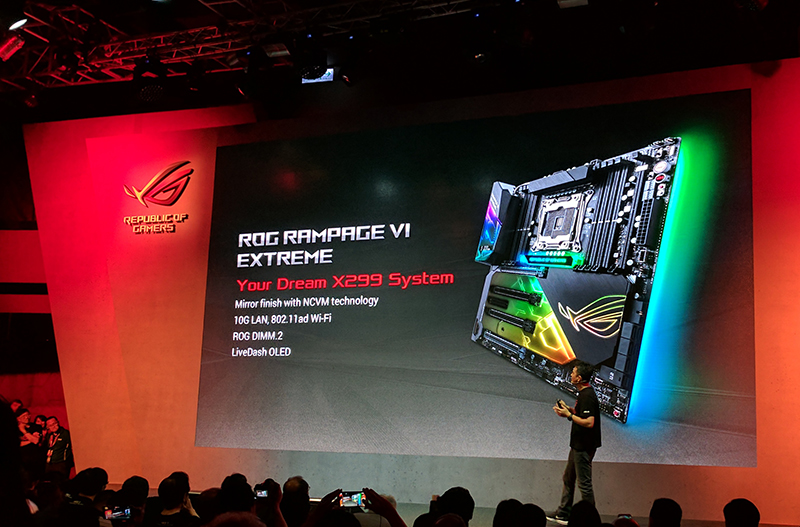 As the flagship ROG product, it’s also no surprise that the Rampage VI Extreme has been dressed to look the part. However, instead of having LEDs peek out from under the PCIe slots and other components, ASUS has somehow integrated the lighting into I/O cover and the PCB shielding.

The result is quite impressive – when the board is powered off, those components look like solid, opaque pieces. But when it’s powered up, it comes to life, with a striking underglow emanating from the I/O cover, the area around the PCIe slots, and even the underside of the board.

And should you still find your rig too plain, the Rampage VI Extreme comes with three RGB headers – two standard 4-pin ones and a 3-pin addressable header. The latter allows each LED on the strip to be customized independently of the others, thus giving you greater control. 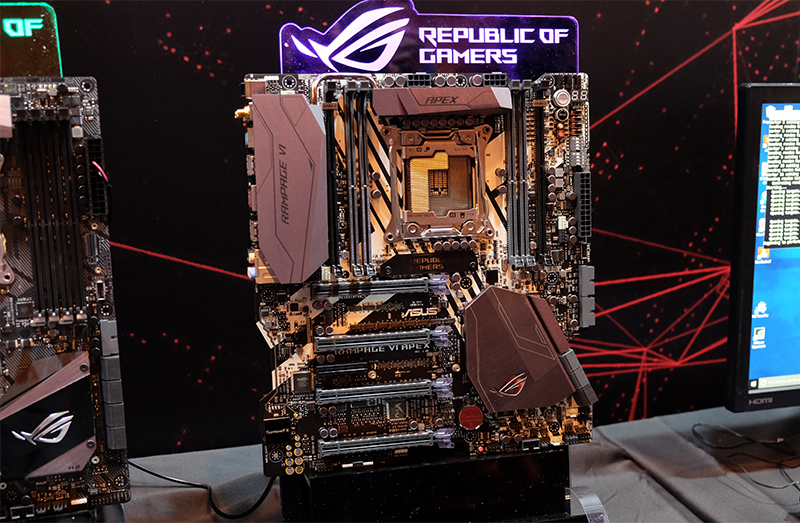 ASUS also announced two other ROG motherboards, the Rampage VI Apex and Strix X299-E. While the Rampage VI Extreme is targeted at enthusiasts who want the most feature-rich board they can get, these two boards take a more focused approach.

The Rampage VI Apex is targeted at overclockers, and we don’t just mean tweaking your CPU multiplier while on air cooling. Instead, ASUS says it is a good fit for LN2 overclocking, and even rarer methods like liquid helium.

This board is a slightly quirky one, and is quite rough around the edges (we mean this literally). For starters, the left and right edges sport jagged cutouts, and the SATA ports on the right are actually angled upward for easier cable routing. 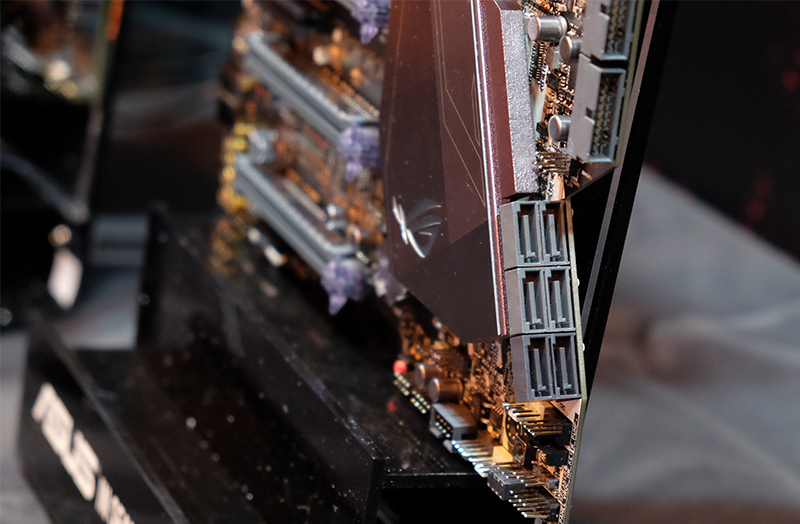 In addition, it features just four memory slots, as that supposedly allows for shorter and more optimized trace routing that improves memory stability at high overclocks. The four DIMM slots are then flanked by two DIMM.2 slots that will take a total of four M.2 SSDs.

On the other hand, the Strix X299-E serves as a more affordable way into the X299-based ROG series. This is also the only ATX board here, and the other two are larger E-ATX models. 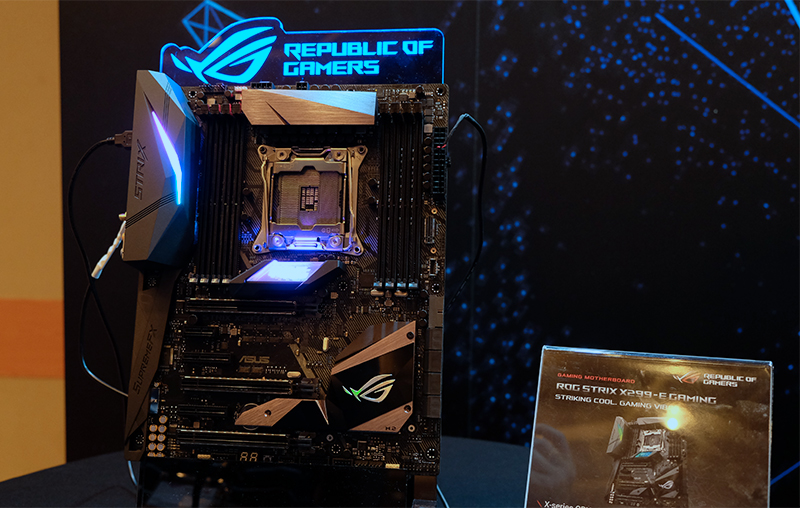 That said, there are still plenty of storage and connectivity options, such as dual M.2 slots, although one of them requires the drive to stick out straight from the board, which is a slightly awkward proposition. Of course, you could also just stick to the 8 SATA 6Gbps ports the board has.

There are also two onboard RGB headers, one of which is an addressable header like the one on the Rampage VI Extreme. 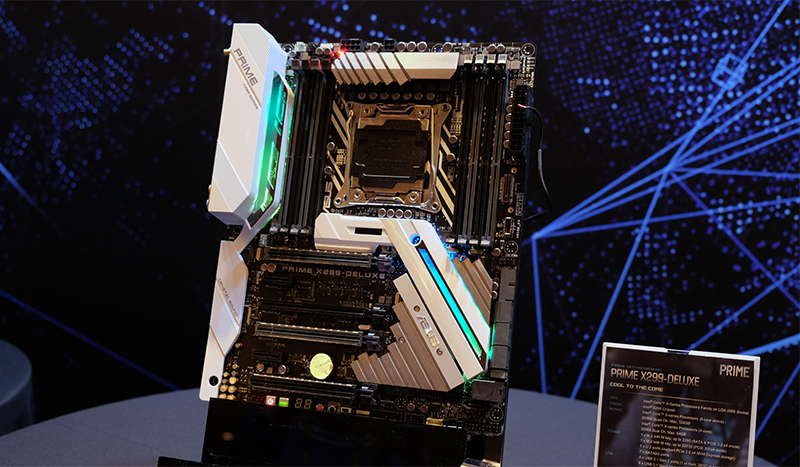 Finally, ASUS took the wraps off four other Prime and TUF motherboards. They are as follow:

These boards share certain features with their ROG counterparts. For instance, the Prime X299-Deluxe comes with 802.11ad wireless, an addressable RGB header, and a LiveDash OLED screen.

Both Prime boards also support Intel VROC (virtual RAID on chip) technology, which is found on the Rampage VI Extreme and Strix X299-E boards as well. In a nutshell, VROC lets you set up bootable M.2 NVMe RAID arrays from the CPU PCIe lanes, theoretically eliminating the bottleneck of data passing through the chipset.

However, this will only work with Intel SSDs, so it has quite limited applicability. You will also need to purchase a hardware key that plugs into a dedicated header on the board to use RAID 1 and 5 configurations (only RAID 0 is available by default).

There’s no word on price and availability yet, but we’ll update when we know more.