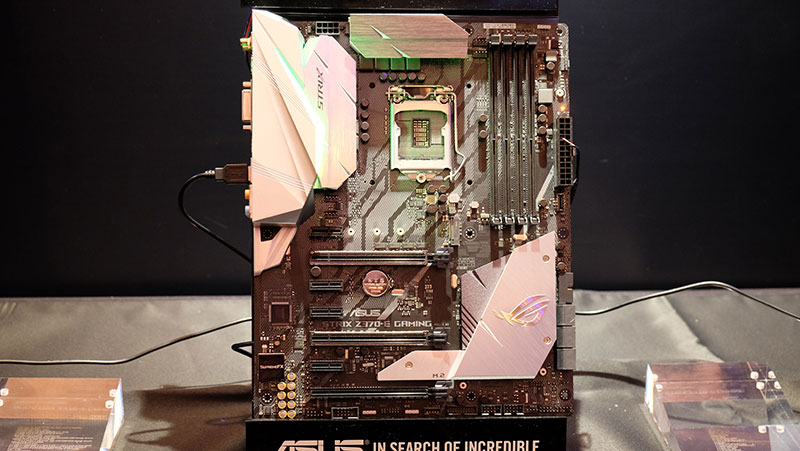 The mid-range ROG Strix boards can appear more than a little confusing, especially given the very similar names on three of the boards.

However, ASUS tells us that the -E, -F, and -H boards correspond to the Extreme, Formula, and Hero boards in the ROG Maximus series, so the ROG Strix Z370-E Gaming is actually the most feature-rich board here.

It comes with onboard Wi-Fi, something the other two lack, and an M.2 heatsink similar to the one found on the pricier ROG Maximus board. It also has a USB 3.1 (Gen 2) front panel connector, a nice addition for use with some of the newer PC cases. 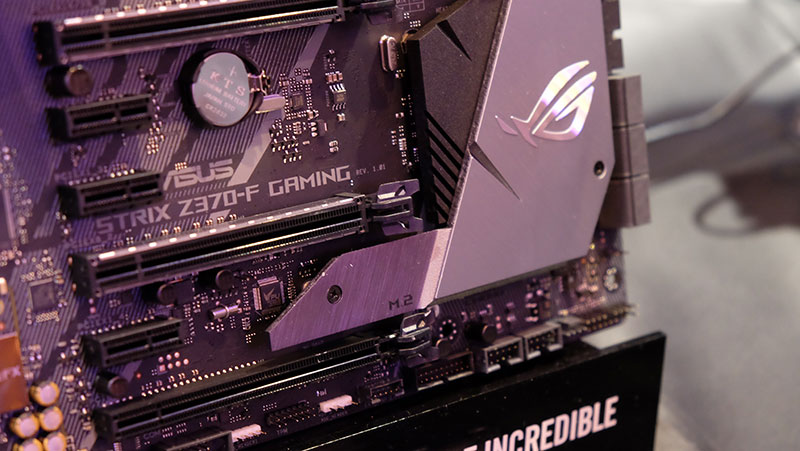 That said, the lower-end ROG Strix Z370-H Gaming is probably the most visually striking of the lot, with a deep red PCH heatsink and splashes of red on the PCB and VRM heatsinks. 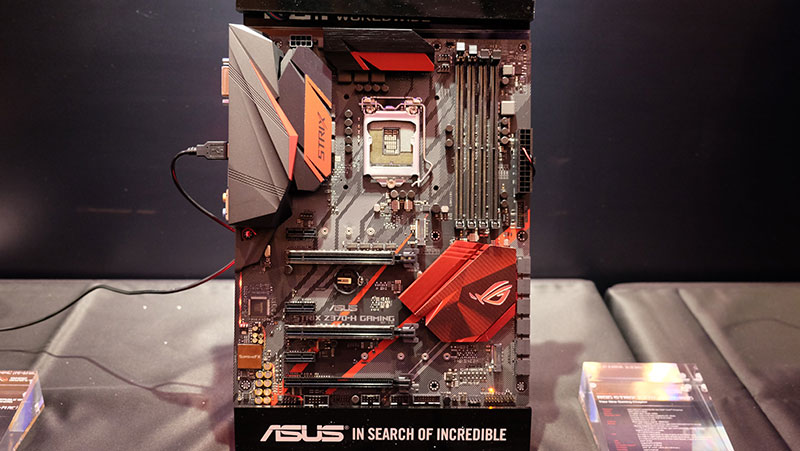 The mini-ITX and micro-ATX ROG Strix Z370-I Gaming and Z370-G Gaming bring up the rear (the -I and -G suffixes point to the older Impact and Gene naming respectively), so there’s something for small system builders as well. And despite its diminutive size, the ROG Strix Z370-I Gaming still manages to cram in two M.2 sockets, four SATA 6Gbps ports, one USB 3.1 (Gen 2) front panel connector, and onboard Wi-Fi. 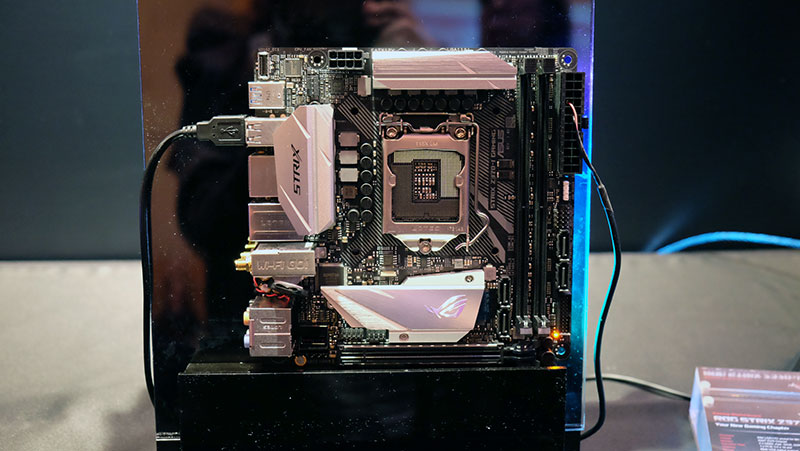 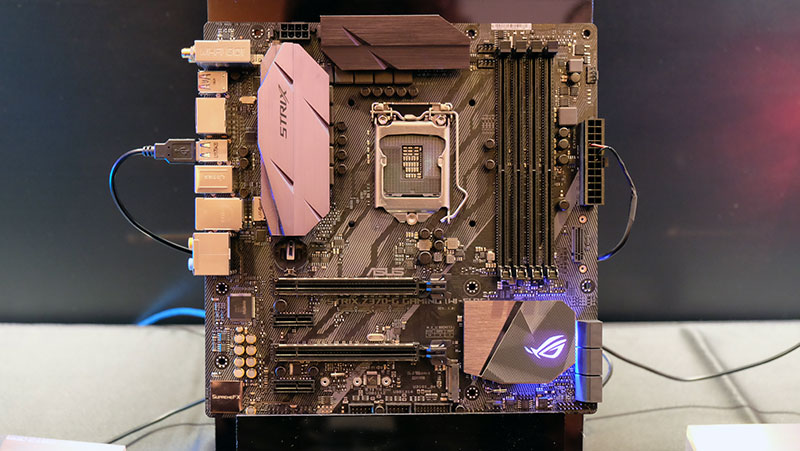 Finally, the TUF and Prime series are targeted at users looking for something a little more affordable.

ASUS says its TUF boards were designed for extended hours of use, so they were all subject to more extensive testing that includes over 7,000 hours of compatibility checks with over a thousand devices, 60 per cent more I/O port insertion tests, and more rigorous temperature and humidity conditions. The boards also feature overvoltage protections – such as may occur with inferior power supplies – and individual ESD guard designs for all ports.

That’s a familiar line from the company, but the boards are actually pretty different from their Z270 counterparts. They’re positioned as entry-level products this time around, and they’re noticeably missing the thermal armor that was the hallmark of the series.

The main difference between the two TUF Z370 boards is the support for NVIDIA SLI. The TUF Z370-Pro Gaming supports up to 2-way SLI, whereas the TUF Z370-Plus Gaming doesn’t, as it only has one full-length PCIe 3.0 slot capable of running at x16 mode. 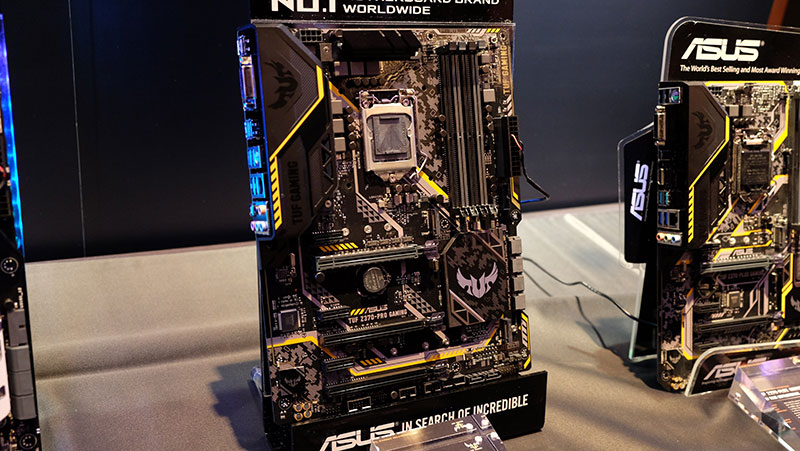 Both boards use a custom audio solution from DTS that offers virtual multi-channel audio for stereo headphones, in addition to custom presets for different game genres.

The Prime boards are probably among the most elegantly designed boards, and they aim to provide enthusiast-grade features in an accessible package. 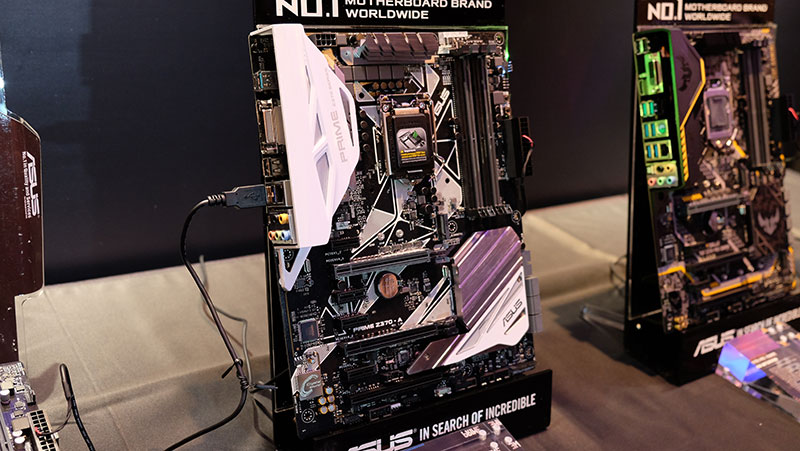 Many of the features we’ve mentioned before are found on the Prime Z370-A, such as the M.2 heatsink, support for up to DDR4-4000 memory and OptiMem technology, and the same Realtek S1220A audio codec used on select ROG boards.

If you wish, you can also 3D-print an M.2 fan mount that will let you mount a 40mm fan above the M.2 heatsink for additional cooling.

There’s support for ASUS Aura Sync as well, although this is limited to a subtle underglow on the right edge of the board.

On the other hand, the Prime Z370-P is a far more spartan offering, with just one PCIe 3.0 slot capable of running in x16 mode, four SATA 6Gbps ports, and a less impressive VRM and heatsink design. 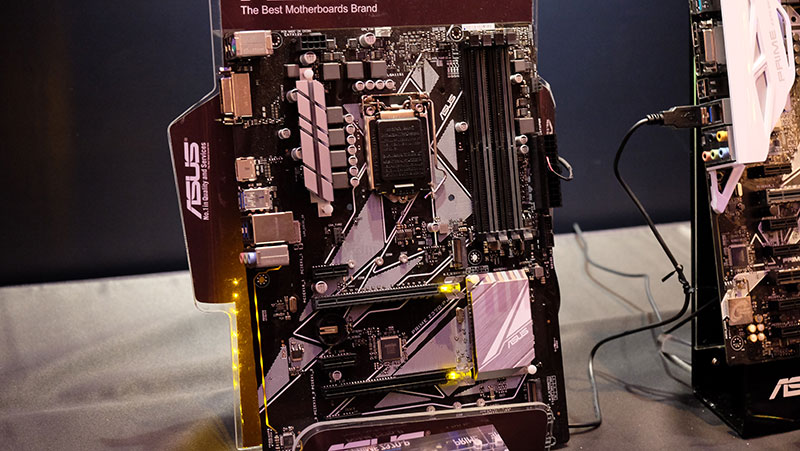 We’re still waiting on exact price and availability details, but we’ll update as soon as we know more. However, you can expect the Maximus X Formula and Code boards to arrive later in November, while the other boards should arrive around Intel’s original 5 October launch date.