Review: Mortal Kombat has lots of fan service to offer but not much else
Shootouts

As detailed earlier in our review, the iPad Air 2 features a markedly more powerful processor than the iPad Air and it will be interesting to see what kind of numbers it will serve up in our benchmarking tests. We will be testing the iPad Air 2 using our usual benchmarks of Sunspider Javascript and 3DMark.

For comparison, we will be including results of the iPad Air, the iPad Mini 2 and also flagship Android tablets like the Samsung Galaxy Tab S (10.5) and ASUS Transformer Pad TF701T.

Here’s a quick overview of how the new iPad Air 2 and iPad Mini 3 measures up against its competitors.

Apple’s iPads have traditionally been strong performers on this benchmark and we were expecting the new iPad Air 2 to blow away the competition, which it did. Its timing of just 286ms is the lowest we have ever recorded and was exactly what we had expected from its new A8X processor. The new iPad Mini 3 was underwhelming as it was slower than the iPad Mini 2 - perhaps because of the additional background resources required for its new Touch ID sensor.

Originally developed as a PC benchmarking tool, 3DMark is now expanded to support multiple platforms, including iOS. Its Ice Storm benchmark is based off the OpenGL ES 2.0 API and is designed for smartphones, mobile devices and ARM architecture compute devices. It includes two graphics tests designed to stress the GPU performance of your device and a physics test to stress its CPU performance. 3DMark now consists of three test sections: Ice Storm, Ice Storm Extreme and Ice Storm Unlimited. Most recent flagship devices easily maxed out the score on Ice Storm and Ice Storm Extreme; as such, we will focus on Ice Storm Unlimited.

Again, the iPad Air 2 blew away the competition by recording a score of 21665 points. Compared to the iPad Air, this is over 45% greater. Also, nothing from the Android camp came close to challenging it. And predictably, the iPad Mini 3 managed the same score as the iPad Mini 2.

Apple’s iPads are renowned for its speed and fluidity and the new iPad Air 2 and iPad Mini 3 follows in this tradition. The iPad Air 2 is especially speedy and fast, and it seems to bristle with unlimited computing power. Even with many apps opened in the background and playing graphics intensive games such as Asphalt 8: Airborne, it showed no signs of slowing down. The additional RAM also comes in handy especially for web browsing, allowing you to have more tabs opened at once without the need of reloading - previous iPads had to constantly reload the page when you browse from tab to tab. Simply put, the new A8X processor is a beast.

The iPad Mini 3 uses last year’s A7 processor and though it is no slouch, it does feel a tad less responsive than the iPad Air 2. However, we are really nitpicking, because in general usage scenarios, it still works briskly and quickly. And our experience is backed up by its benchmark results, in terms of performance, the iPad Mini 3 remains to be one of the leading tablets around in its form factor. 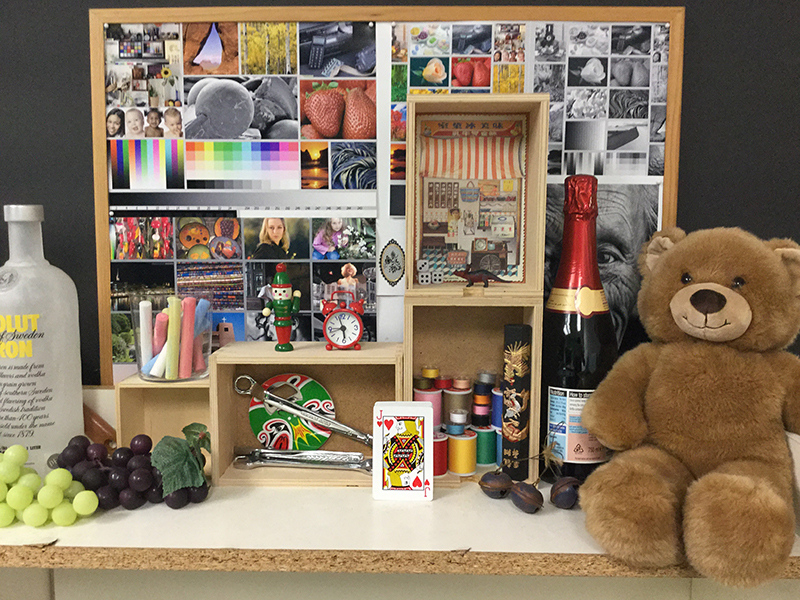 The iPad Air 2 has improved front and rear cameras. The rear camera now shoots at 8 megapixels and includes a 10fps burst mode and 120fps slow motion video, while the front camera now has a larger ƒ/2.2 aperture.

Looking at the image above and comparing them with the iPhone 6, its clear that the phones have the advantage in imaging performance. Compared to the new iPhones, the iPad Air 2's photos exhibit more noise and are not as sharp; but on the flip side, color reproduction is natural and the camera was quick to focus. In all, we must say that the iPad Air 2's camera has been improved appreciably. Nevertheless, we still think its silly to be taking photos using your tablet.

The new iPad Air 2 has a smaller battery compared to the iPad Air and this has affected battery life quite drastically. In our tests, we found that the newer iPad Air 2 lasted over 80 minutes shorter - that's more an hour. As such, its recorded battery lifespan is the shortest amongst comparable tablets. And just as we had expected, the new iPad Mini 3 lasted just about as long as last year's iPad Mini 2.

And if we look at the power consumption charts, the iPad Air 2 is clearly one of the more power hungry tablets. We had expected the new A8X processor to consume more power than the older A7 processor, but it may surprise you to find that it actually consumes around 4% more power - but it offers loads more in terms of performance, so the tradeoff is reasonable, we think. Hence, if anything, the smaller battery in the iPad Air 2 is to be blamed for its slightly lackluster battery life.

To put the earlier battery life and power consumption figures into perspective, let's look at our portability index, which compares battery life to the device' volume and weight. Apple's iPad Mini tablets are the highest score bunch here, but that is because they only have 8-inch displays, while the rest of the tablets have 10-inch displays. And again, the new iPad Air 2 is letdown by its short battery life as it is outscored by rivals from Sony and Samsung. So while general performance is definitely one of the iPad's strong suits, we cannot say the same for battery life and portability.

Still the best tablets around 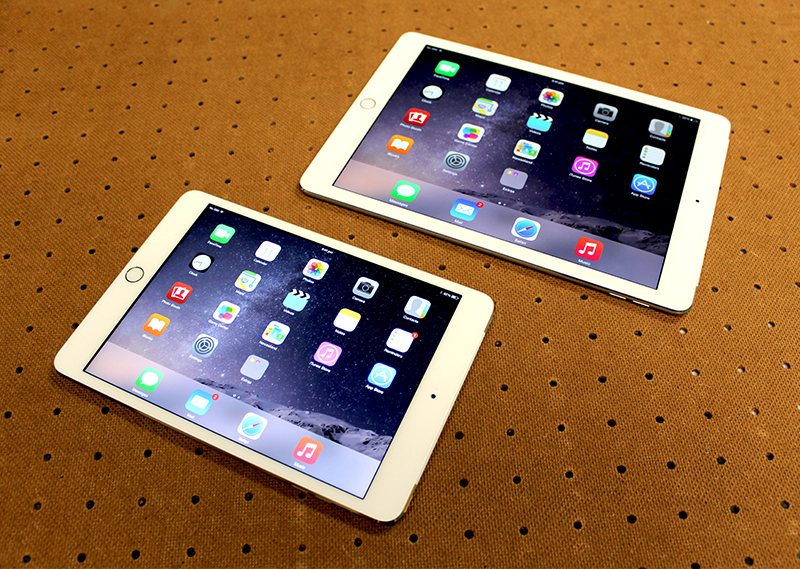 If you are hunting for a tablet, Apple’s iPads are still the best around. The sheer amount of apps optimized for the iPads is unmatched and is Apple’s biggest asset against the competition. Furthermore, Microsoft also just recently announced that it will be making Office free for iOS devices and this will surely only boost the productivity capabilities of the iPad. And to add, there is also no shortage of accessories for Apple’s tablets, including some nifty ones like the Brydge+ iPad keyboard.

The two new iPads from Apple follow last year’s releases in that they are evolutionary rather than revolutionary. It seems that we have reached a point of diminishing returns for tablets and it is hard to see any kind of exciting innovation for these types of products at this stage. Already, they are supremely thin, their displays are mostly fantastic and they have adequately long battery lives.

Let’s get the iPad Mini 3 out of the way because it is a bit of a letdown mainly because it is basically the same model as last year’s but with a Touch ID sensor and a new Gold finish - the processor, display, camera and battery are all unchanged. As for pricing, the price for the base 16GB models - both WiFi-only and Wi-Fi + Cellular - are also unchanged. However and fortunately, prices for the 64GB and 128GB models have been reduced quite substantially - the 32GB model has been removed from the line-up. If you are considering the iPad Mini 3, the 64GB and 128GB models are the obvious choices. Here is a table comparing the prices of the iPad Mini 3 and iPad Mini 2, which will still be offered for some time to come.

Looking at the table, another thing becomes clear. If you have no need for the Touch ID sensor, the older iPad Mini 2 represents great value, especially after the price cuts it received. The 16GB Wi-Fi-only iPad Mini 2 model, which now goes for just S$408, is especially tempting along with the 32G variant at just S$478. Apple has also retained the first generation iPad Mini in its lineup, but only the 16GB models. The difference between it and the iPad Mini 2 is day and night thanks to the latter's Retina display and A7 processor. Furthermore, the first generation iPad Mini is powered by the aged A5 processor, which is based on a 32-bit architecture. And with Apple now transitioning to 64-bit for its mobile devices along with mandatory development of 64-bit apps, there is no telling how long the A5 will remain relevant.

The iPad Air 2 is much more interesting proposition especially for those in the market for a 10-inch tablet. From a performance perspective, the new iPad Air, thanks to its A8X processor, is without peer and is quite possibly the most powerful tablet in the market right now. What’s more, it is also slightly thinner and lighter; the camera has been improved; and it also gets the very handy Touch ID sensor. However, all of this has come at a significant penalty to battery life and we are also perplexed by Apple’s decision to remove the lock switch, which we thought was useful.

Like the iPad Mini 3, the base price of the 16GB iPad Air 2 remains the same for both Wi-Fi-only and Wi-Fi + Cellular models, with the 64GB and 128GB models receiving significant discounts. So like the iPad Mini 3, our purchasing advice for the iPad Air 2 is that the 64GB and 128GB models are the more logical choices form a cost per GB of storage perspective. Last year’s iPad Air also received significant price reductions and are good alternatives, but bear in mind that the new iPad Air 2 outperforms it quite significantly, so if you upgrading from an older iPad and you want something that will remain relevant for longer, the iPad Air 2 is actually worth extra money considering its superior performance. Additionally, the older iPad Air will be offered only in 16GB and 32GB capacities. Here is a table comparing the prices of the iPad Air 2 and its predecessor.

To summarize, if you are in the market for a tablet, there are some interesting alternatives from the Android camp, namely Sony's Xperia Z2 tablet, Samsung's Galaxy Tab S and the upcoming Nexus 9. However, Apple’s iPad ecosystem remains far ahead of its rivals. The iPad Air 2 received significant hardware improvements and is the most powerful tablet we have ever tested, easily besting its rivals in all benchmarks. Our only major gripe is its slightly uninspiring battery life. And if you are seriously considering one, remember that the 64GB and 128GB models are the most value for money. On the other hand, the iPad Mini 3 is a disappointment having received no significant upgrades except for the Touch ID sensor and new Gold finish.