At AMD's Tech Day 2015 in Computex, the company's new darling and focus is their 6th generation APU, "Carrizo". However, Carrizo in its current form is optimized for mobility products. We'll talk more about it when the NDA lifts a couple of days later.

For desktop computing, enter the "Godavari" APU. This will gradually replace the existing "Kaveri" desktop A-series APUs. We say gradually, because as of 28th May, AMD only has one champion SKU and that is the A10-7870K. Over the many weeks and months ahead, AMD will make other Godavari SKUs available - similar to how Kaveri APUs were first launched with limited models and were later updated with more lower tier Kaveri APU models in the channel.

Unlike most new codenamed products that bring something brand new to the market, Godavari is more like an updated edition of the same Kaveri APU. If you were to peer underneath, architecturally, it's essentially using the same building blocks and silicon as the original Kaveri.

To get a better understanding what AMD has done with Godavari, we spoke with Jason Banta, AMD's director for client product management. Primarily, AMD wanted to improve what the A10-7850K already delivered. Due to the process maturity and better binning process, AMD was able to wrangle more performance out of their previous top APU. This came about from increased base and boost frequencies, but GPU frequencies were improved tremendously - from 720MHz to 866MHz on Godavari. Additionally, power and performance management schemes improved to service the faster APU. Speaking of a faster chip, there were enhancements in the way the thermal interface was done, as well as the way the wafer was being processed to try and get those higher frequencies.

A big part that enabled all of the above was the maturity of the process technology, which allowed the engineers to evaluate and fine-tune what AMD was doing over a year and half to bring about Godavari. Note that while the original Kaveri architecture spanned the mobile to desktop space, here's where it takes fork: the Godavari update is intended for the desktop space whereas the upcoming Carrizo will refresh the mobile segment. Hence the reason AMD decided to assign the new Godavari codename for this improved Kaveri APU just to be sure that the internal teams address the respective products in proper.

Although there are no brand new architectural or hardware features, the plus point is that AMD has managed to improve gaming and productivity performance of an already well oiled product, which works on a wide variety of Socket FM2+ motherboards that are available in the market. In fact, we first got wind of Godavari from motherboard vendors who were eager to make product announcement updates on their end. Well, today we finally got to know more about Godavari.

As a mainstream high performance APU product, AMD certainly understands for whom it is targeting the processor for. Simply said the A10-7870K's mission is to provide enough horsepower to power top online multiplayer games smoothly at Full HD resolution without needing to plug in a discrete GPU. Here are some results provided from AMD:- 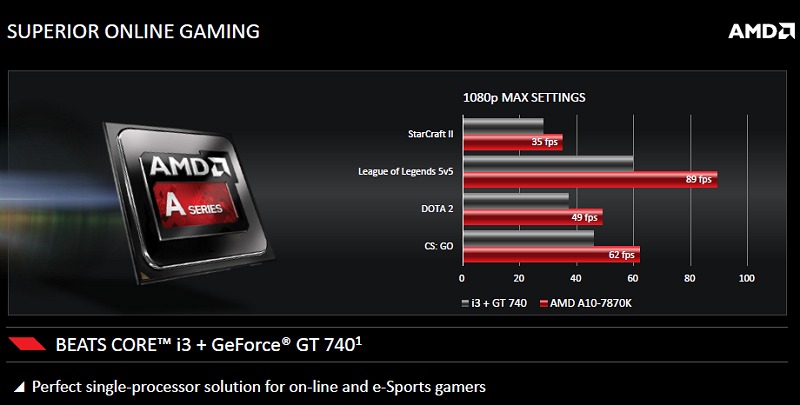 In fact, AMD actually recently published a blog on how to build a powerful and effective gaming rig based on the A10-7870K and it should give you some ideas on how you can configure this versatile APU to serve a wide variety of needs. Meanwhile, we had a go at the APU personally while demoing DiRT Rally gaming at fairly high quality graphical settings and we're pleased to report that it was more than satisfactory. The experience was made better thanks to the use of a compatible AMD FreeSync monitor which the new APU supports:-

FreeSync, VSR and DirectX 12 support come to Godavari and Kaveri

Along with the timely launch of the Godavari APU, a new driver released by AMD on that day also brings about new software feature support for both Godavari and Kaveri APUs (since they are both using the same building blocks). These APUs now have support for AMD's FreeSync technology (with more reading over here and here), Virtual Screen Resolution (VSR) and full DirectX 12 support.

With regards to DirectX 12 support, if you recall, this API brings with it an interesting and important feature called Explicit Asynchronous Multi-GPU or also otherwise known as Explicit Multi-adaptor. What this enables is direct control of multiple GPUs in the system, regardless of the GPU vendor type or GPU capability. The API is able to collectively combine graphics compute resources into a "single bucket" for execution. To take advantage of this feature, it would be the onus of the game developer to enable such support within the game engine. Fortunately, thek game engines that have DirectX 12 support are still in the development and refinement stage and it won't be too much hassle for the game engines to incorporate Explicit Multi-adaptor support in their upcoming variations to bring about a much more efficient use of graphics compute resources.

Coupled with a new frame rendering technique with DirectX 12, Split Frame Rendering (SFR), it will allow the texture and geometry data to be divided between GPUs. The GPUs will be able to render a single frame collectively as each GPU will work on a specific portion of the frame, and the total number of constituent frame portion being equal to the number of installed GPUs. Being able to render a single frame all at once, the queue depth is “always just one” (or less), this will allow for higher frame rates.

What would that mean to you? You no longer have to buy identical GPUs for CrossFire support (or SLI support), and multi-GPU performance can scale across even integrated GPUs such as the Kaveri and Godavari APUs - you don't have to pair them with similar level discrete graphics to achieve the graphics horsepower multiplication.

AMD was keen to show an example of this with a new RTS game called Ashes of Singularity by Oxide Games and Stardock Entertainment. It looks and feels like a massively updated Supreme Commander, but the Nitrous game engine it uses has support for Explicit Multi-adaptor and SFR features in DirectX 12. Thus it's able to use both discrete and an integrated GPU such as a Radeon R9 290X on a A10-7870K system - bringing together the 44 cores on the discrete GPU and 8 more from the integrated GPU for combined use. In a screenshot provided by the game developer, you can see that the red areas highlighted in the scene are all rendered by the APU's GPU and the rest by the discrete GPU.

Welcome to the flexible and versatile future of the gaming industry, and Godavari's APU is helping to enable one aspect of it. 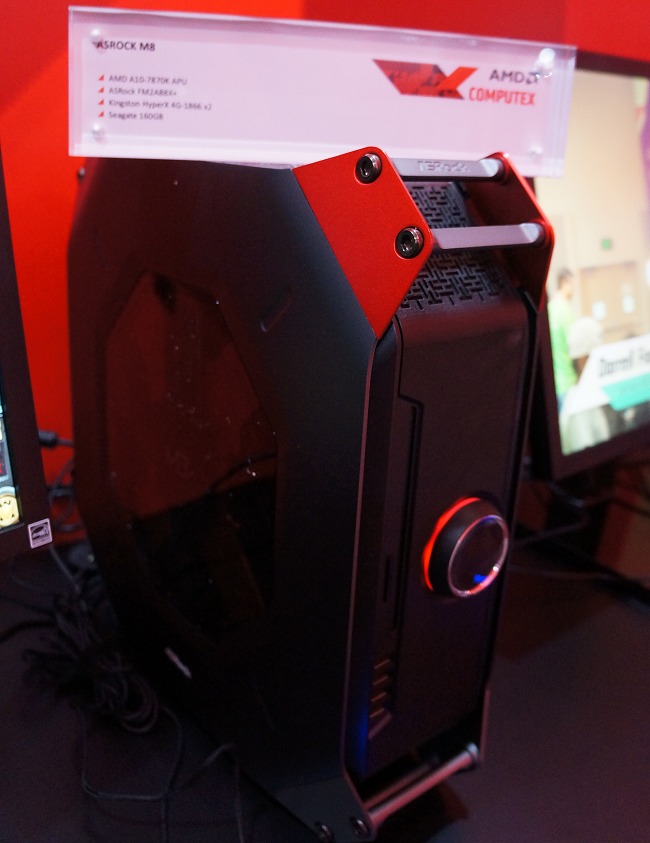