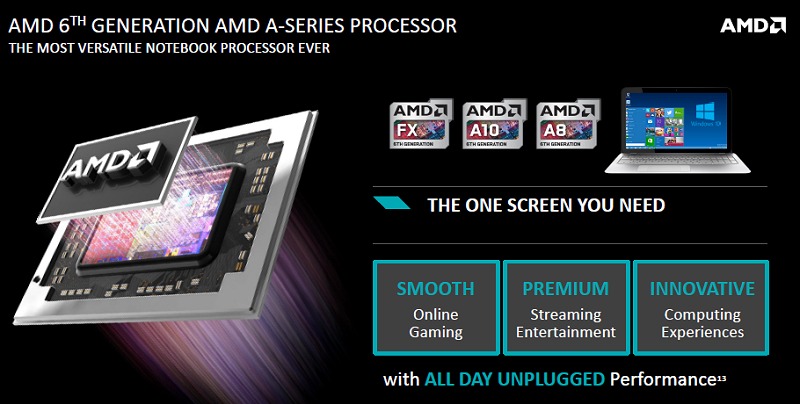 First announced at AMD's Future of Compute event in Singapore late last year, and further teased with some of Carrizo's inner workings earlier last quarter, Carrizo - AMD's 6th generation APU -  will finally be available by end of the month.

Aside from improved performance that can be expected from a more advanced DirectX 12 capable third-generation GCN graphics core based graphics engine, its all new Excavator core is highly optimized for power efficiency and is the first APU to integrate the Southbridge chipset functionality within the same APU die. This means Carrizo APU based systems are much more streamlined with better power control as there's less out-of-chip interdependency to manage.

Today at AMD's Tech Day in Computex 2015, AMD has showcased and shared with top media around the world of Carrizo's capabilities and the market space it will address. First and foremost, AMD's Carrizo will first make its appearance in the mobile space - specifically notebooks of all sorts. As such, you and I won't be able to get one off your PC components store, but you'll have to wait for the big notebook vendors to retail their mobile computing products into the retail channel. AMD was positive that by end of June, notebooks featuring Carrizo will be made available. To prove that point, check out the showcase of a number of tier-1 notebooks that are powered by Carrizo at their press conference in Computex.

The case for Carrizo and its target market

It's 2015 and while we don't yet have flying cars or a hover board that goes anywhere, you most certainly have a fitness tracker to keep a close watch of your activity trends, a couple of mobile phones to cater to your personal and work spheres or simply because you want to be seen with a device that best matches your style for the day, a smartwatch to glance at notifications, and probably a tablet for extended reading or media consumption while you're on the move.

Even with the rise of gadget distraction, it's more than likely that a computing device such as a desktop or notebook is used to sync and manage all these mobility gadgets and rely upon for any serious tasks such as content creation, media management, enjoying content on a big screen and of course gaming. The computer is no less relevant today than it was decades ago, apart from its shifting form factor. Falling prices and improved capabilities of notebooks made these mobile computers a more versatile and preferred workstation of choice for a wide variety of folks.

Brand owners and reviewers like ourselves love to showcase the expensive tech toys outfitted with the top-end specs and features. However, more likely than not, people are going to buy a mainstream variant. The reality is that the mainstream segment is where the volume shipments happen, and by a far larger margin. According to IDC, nearly 40% of all notebooks shipped in 2015 belong in this segment - the US$400 to US$700 bracket (~ S$500 to S$1000). That alone amounts to 63 million notebooks and that's a huge figure.

However, a large portion of notebooks in general is powered by Intel and while we have to give them credit in enabling the market to push new form factors and frontiers, they are also often on the expensive end. The mainstream market is focused on price and functionality and it's an area that Intel usually doesn't deliver as well when compared to AMD's solutions at a similar price point - especially within the sensitive US$400 to US$700 price bracket.

Consider that the main usage trends for computing devices these days are to create and manage content, stream videos and indulge in online gaming - tasks that all notebooks can partake - the exact question is how satisfying is your quality of experience? Note that these tasks are increasingly being accelerated by relying on the GPU but that's one area where as much as Intel perseveres, its integrated GPU leaves much to be desired. Taking a page off desktop processors where we've compared AMD's A10-7850 Kaveri APU against a variety of Intel processors last year, the Kaveri APU shows its chops for GPU intensive tasks.

This is the main reason why you often see Intel based notebooks boasting of a discrete GPU to make up for the poor showing of the integrated GPU. This adds to the cost, complexity and form factor of a notebook. When not implemented properly, such as a notebook boasting an NVIDIA discrete GPU but lacking NVIDIA Optimus technology, your power consumption skyrockets due to inefficient use of the discrete GPU, thus affecting battery life of the notebook.

Having identified the target market, this is where AMD's new Carrizo APU hopes to deliver enhanced user experiences and capabilities to a price sensitive mainstream segment with better battery life, top notch video, gaming and GPU compute capabilities than what the competition offers and improve over what Kaveri did for notebooks last year. More APUs models to be made available in the future, but this is Carrizo’s first salvo. As pointed out earlier, AMD expects Carrizo equipped notebooks to hit retail by end of the month or just after and here’s what the notebook line-up looks like from actual partner vendors – all of which are big name players, so that's encouraging.

If you’re expecting how the performance figures stack up between these three APUs and that from Kaveri, we’ll reveal some of that later in this article as we deep dive and showcase all of the changes AMD has made underneath to bring about their next generation mobile platform for the masses.

AMD expects their top FX-class processor to compete favorably against a Core i5-5200U processor based notebooks from Intel – a popular chip for several mid-range notebooks. Since the actual retailer notebooks won’t actually be out until perhaps next month, we were provided with an opportunity to interact with a Carrizo powered reference notebook. It might not look like much, but it has got it where it counts the most. The reference machine is outfitted with the top model APU, the FX-8800P. It was our good luck that the notebook wasn’t really fastened, so we got a quick look inside of it too:- Note the really compact area of the PCB that houses the brains and logic of the entire system while the rest of the machine is home to cooling fans, battery and storage devices. Such is the advantage of System on a Chip (SoC) solution, which is the new Carrizo and that really simplifies much of the innards within the notebook.

Here are some preview results to showcase where the FX-8800P stands, but we’ll have to wait for the retail edition notebooks to really figure out if the meet the reference standard or even better it:- 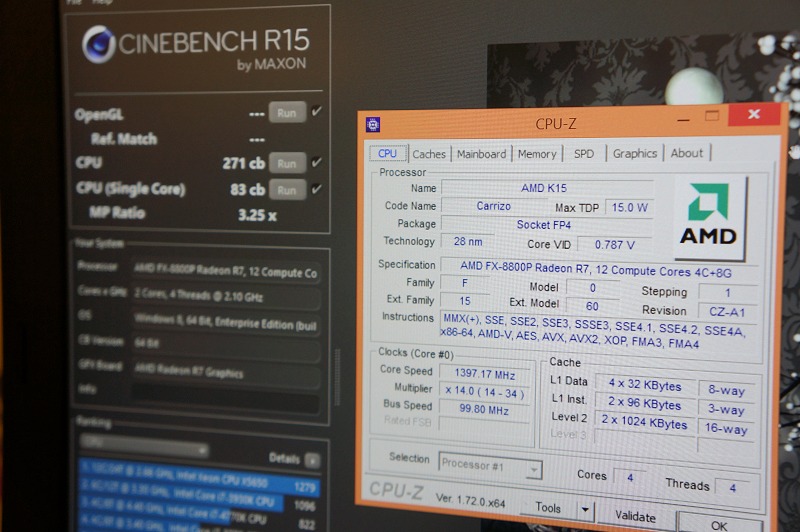 What you’ve seen is just a snapshot of the Carrizo APU’s capabilities but there’s much more to it than just benchmark numbers. We deep dive into the architecture of the APU and share more of its capabilities and the experience you will get out of it on the following page, so read on!