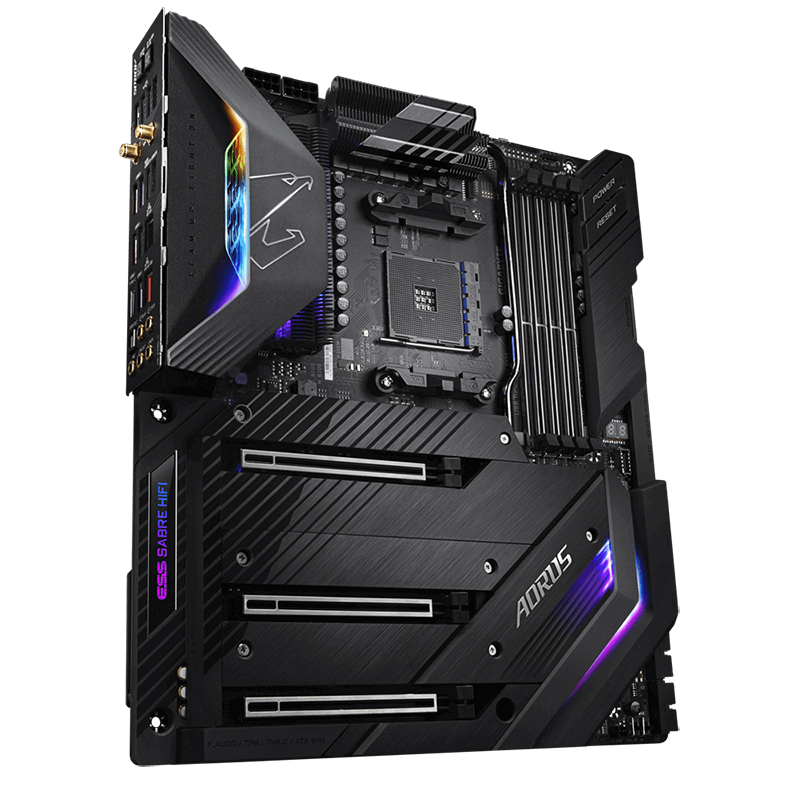 Gigabyte's top X570 motherboard certainly looks the part, with beefy heatsinks, snaking heat pipes, and shielding for the majority of the PCB. However, where the board really stands out is in the overclocking department, and the X570 Aorus Xtreme features a true 16-phase power delivery subsystem to provide smoother and cleaner power to your Ryzen 3000 processor.

But with overclocking comes plenty of heat, which is where Gigabyte's so-called Thermal Reactive Armor comes in. One surprising thing to note is that the X570 chipset is only passively cooled on this board, the lone exception in this shootout where everyone else has a fan built into the chipset heatsink. While it may lack the integrated fan, it tries to make up for that with a multi-layered chipset heatsink that is connected by a heat pipe to the extensive heat sink fin array that cools the VRM. This effectively means that the entire motherboard is now a giant heatsink. 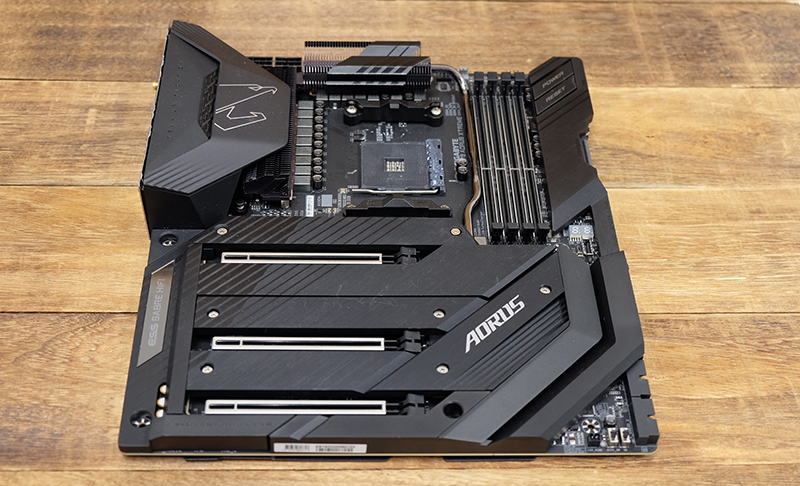 The back of the board also features an aluminum base plate that also acts as a heat sink for the rear of the PCB. A thin layer of what Gigabyte refers to as NanoCarbon is further coated on the base plate through electrostatic adhesion to improve thermal radiation. In fact, the company says this can lower the temperatures of PWM components on the motherboard's back by up to 10 per cent. 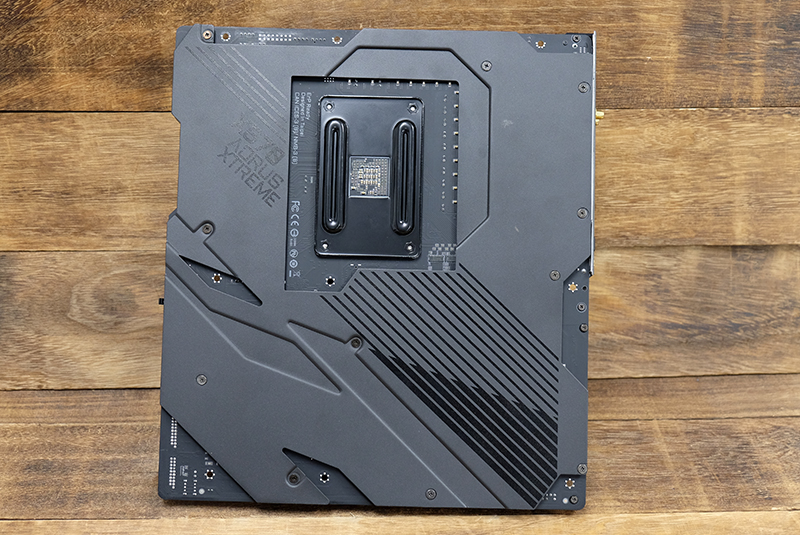 One of the reasons why Gigabyte chose to omit any integrated fans in the I/O cover or chipset heat sink is noise. As it turns out, the company is so concerned about staying quiet that it's bundling a noise detection cable with the board to help you monitor your overall system noise and adjust fan speeds accordingly. You don't need to worry about privacy though, as the cable doesn't record any sound and only detects sound pressure.

Another point that deserves mention is that Gigabyte clearly put some thought into cable management. All the ports on the right edge are side-mounted, which should make routing and tucking your cables away slightly easier. It also means the board looks a lot cleaner as you don't see the cables sticking straight out of it.

However, it's missing a dynamic OLED display that the ASUS and MSI motherboards have. I don't find this to be a super significant omission, and Gigabyte has instead focused on areas where there are more substantive gains, but it's something to take note of if you were hoping to customize the onboard display. That said, you do get a regular 2-digit debug display, so Gigabyte still has the troubleshooting essentials covered. 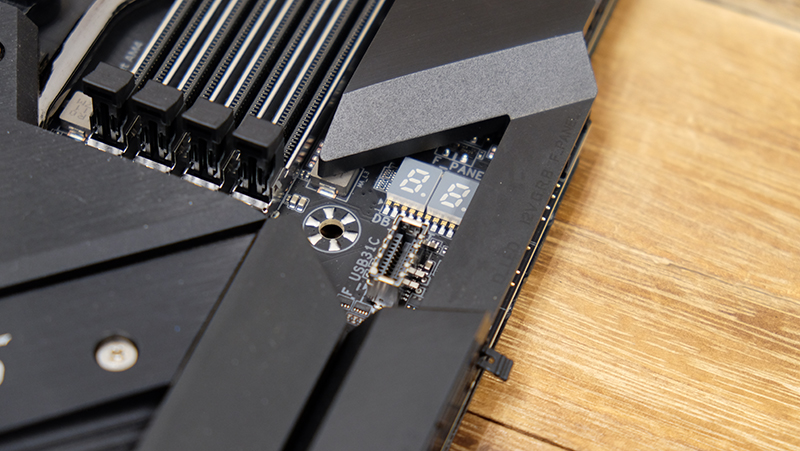 In terms of expansion slots, the X570 Aorus Xtreme has three PCIe 4.0 x16 slots, the third of which runs in x4 mode and draws lanes from the X570 chipset. Of course, they're all reinforced by metal, and Gigabyte says it uses a one-piece stainless steel design for both the PCIe and DIMM slots. In addition to protecting the slots against damage, the metal supposedly also helps prevent the PCB from flexing since the more rigid slot won't bend either. 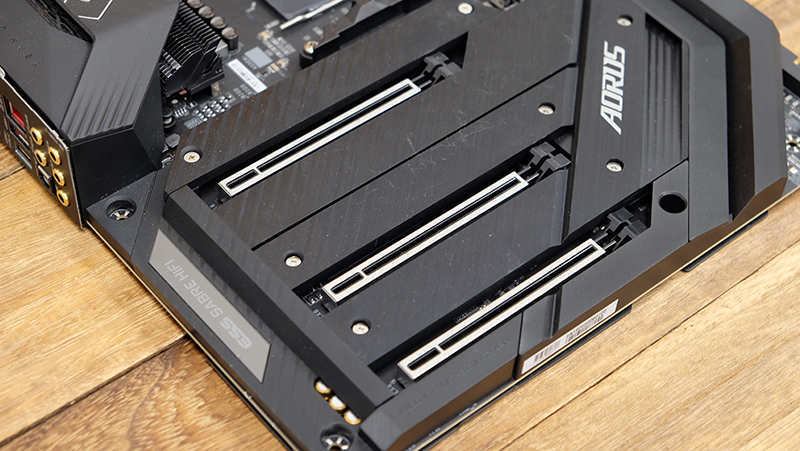 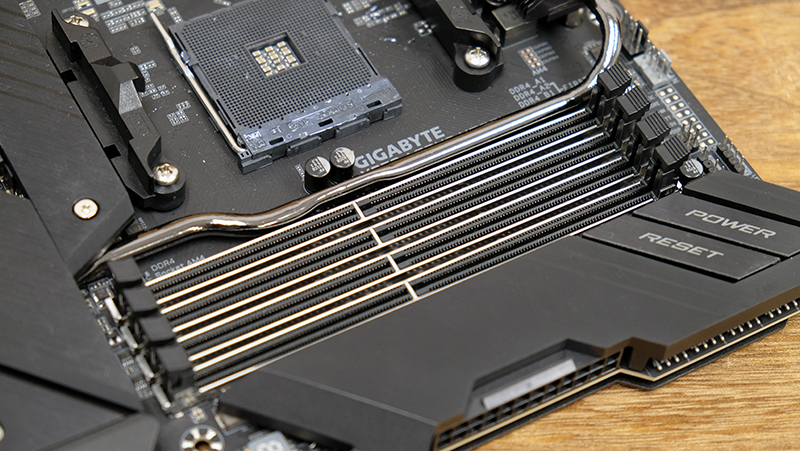 The rear I/O panel doesn't have any integrated display outputs since anyone who buys this board is probably going to have a pretty powerful discrete GPU anyway. Instead, you'll find an Aquantia AQC107 controller for 10Gbps network connectivity and a second Intel Gigabit LAN port, in addition to support for Wi-Fi 6 and Bluetooth 5. You'll also find one USB 3.1 (Gen 2) Type-C, five USB 3.2 (Gen 2) Type-A, two USB 3.2 (Gen 1), and four USB 2.0 ports round the back. 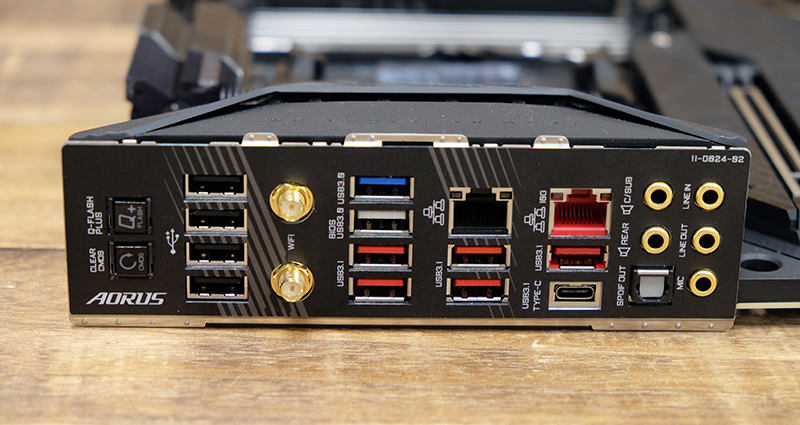 It's the only board here to include four slower USB 2.0 ports on the rear panel, but you can probably just use these for connecting peripherals like your mouse, keyboard, and headset. There are also buttons for updating the BIOS and clearing CMOS, which pretty much appear to be the standard offering these days.

On the storage front, there are six SATA 6Gbps ports and three M.2 sockets. Each of the latter has its own Thermal Guard heat sink to reduce throttling and they all support both PCIe and SATA drives. The third M.2 socket shares lanes with SATA_4 and SATA_5, so installing a PCIe drive there will disable the latter two SATA connectors. 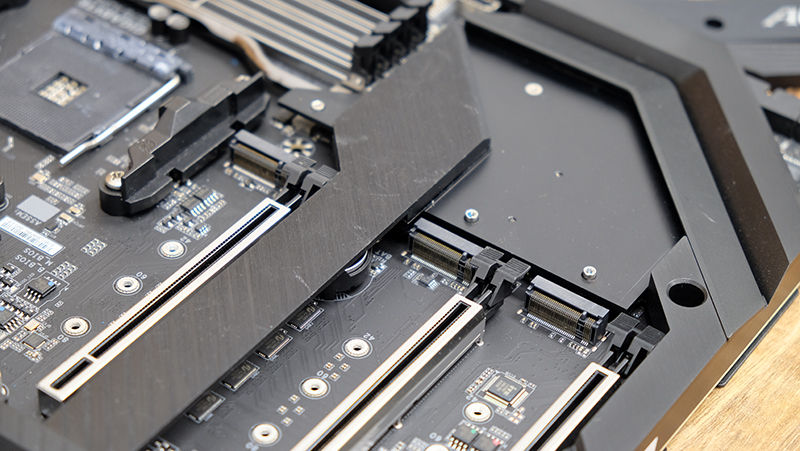 For fan connectors, the Aorus Xtreme has one CPU fan header, one fan header for an AIO pump, four chassis fan headers, and two more that can be used for either a chassis fan or water cooling pump. 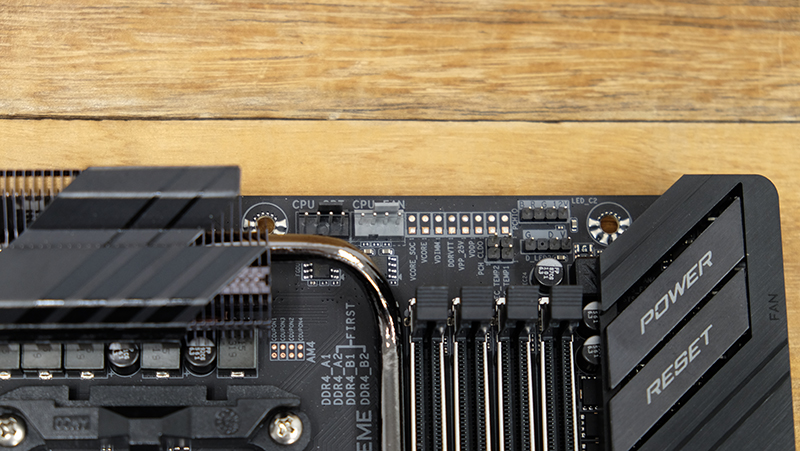 That makes for a total of eight, but the bundled RGB Fan Commander adds eight more fan and eight more RGB headers. Every single fan and LED strip hooked up to the Fan Commander can also be controlled independently, so you still get to maintain pretty fine-grained control over your system. The Fan Commander takes the form of a compact hub, and its magnetic base means you can install it just about anywhere in your case quite easily. 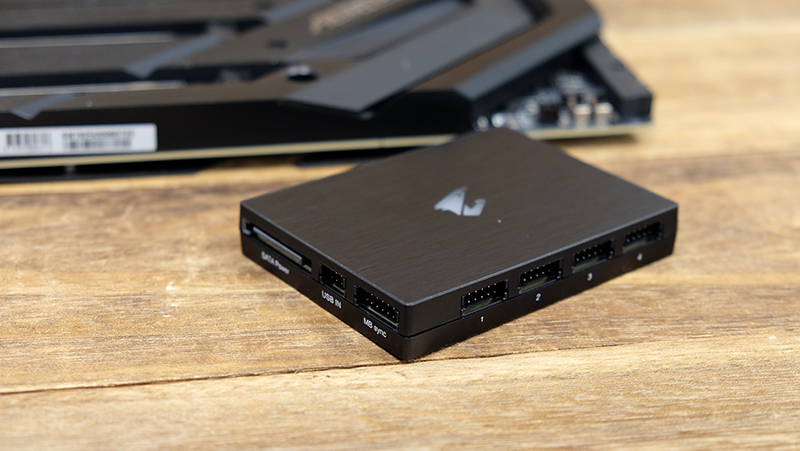 Other than that, the board itself has two addressable LED strip headers and two regular LED headers, which seems to me to be more than enough for most builds. 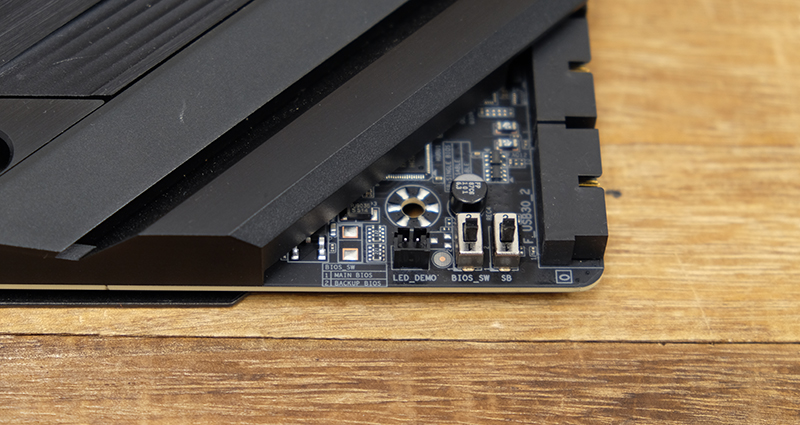 Finally, a small, removable section of plastic conceals the front panel audio, TPM, and other headers. Gigabyte didn't want to clutter the board with a ton of exposed headers or switches, and I do appreciate its efforts to make the board look neater and sleeker. 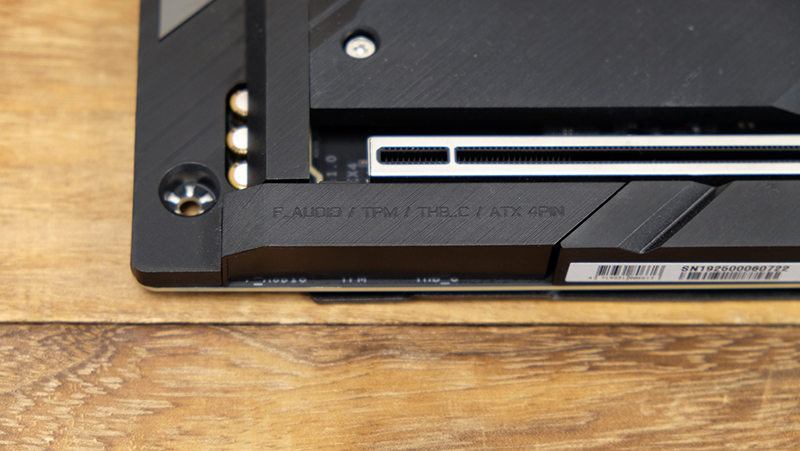 The X570 Aorus Xtreme has 16 true phases, which means no phase doublers were used at all. This direct VRM implementation straight from the Infineon PWM controller is still quite rare today, with many high-end boards still opting for phase doublers to turn an 8-phase VRM into a 16-phase one. 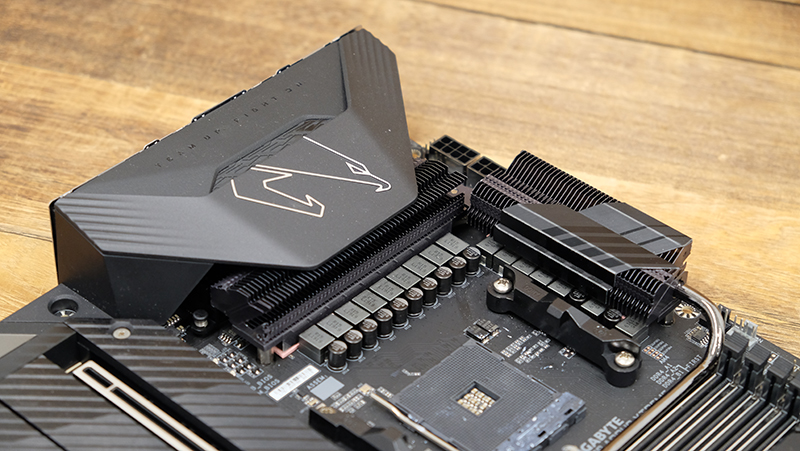 As a simple rule of thumb, the more VRM phases on a motherboard, the more stable the supply of power to the CPU. Each phase produces a burst of power, or pulse, that is staggered from the last, so the higher number of phases ensure that there are fewer troughs in between pulses and a smoother supply of power for the processor. This is particularly vital when you're trying to push a chip to its limits, which is why the X570 Aorus Xtreme looks like it could possibly be the board to get for serious overclockers.

Furthermore, more power phases exist can reduce the power loading levels on each VRM and MOSFET, and also lower operating temps to increase your chances of a higher overclock.

The Aorus Xtreme uses the new Infineon XDPE132G5C digital PWM controller, the first in the industry to offer a true 16-phase design. In addition, it features Infineon TDA21472 PowlRstage MOSFETs that are capable of providing at least 70A of power, for a total of up to 1,120A. Gigabyte says it's trying to ensure that power design will never be a bottleneck for the X570 Aorus Xtreme, and it's pairing its souped-up VRM with dual 8-pin CPU connectors and a 2x copper PCB that supposedly provides additional power trace paths between components to handle higher power loads.

On top of that, there is an extra 6-pin PCIe power connector for the graphics card. 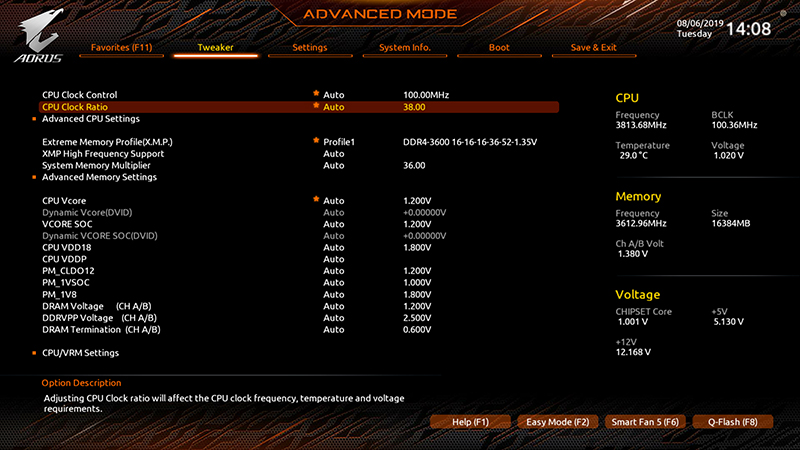 Compared to ASUS, the Aorus motherboard has a more cramped BIOS interface. I'd have preferred for the menu items to have more spacing between each other, but I'm really just nitpicking here. Overall, navigation is pretty straightforward, and there are also quick shortcuts to key features, such as the fan curve controls and Q-Flash BIOS update.

If you want to turn on Precision Boost Overdrive in the BIOS, that's located under the Settings header.