When you're looking at motherboards this high in the product stack, I think it's safe to say that they're all pretty decent and have just about everything you need. However, what I can't say is that they're all equally good and worth your money. There's also no getting away from the fact that certain combinations of features work better than others, and it makes more sense to pay for these than some other implementation.

That said, here's a wrap-up of where each board stands. 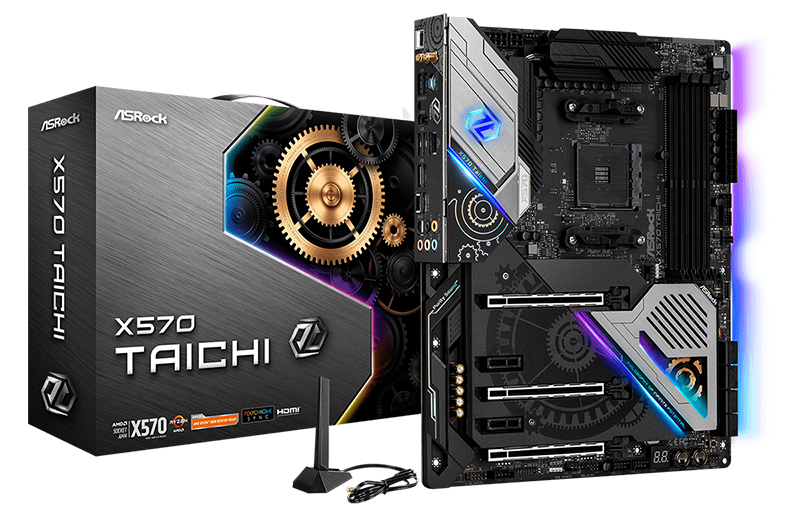 The ASRock X570 Taichi is the most affordable board of the lot at S$499, so this comparison isn't entirely fair. That said, with the exception of the limited edition Aqua motherboard, this is the highest-end X570 board from ASRock, so it'll have to do.

The Taichi checks most of the right boxes, featuring plenty of storage expansion options, support for Wi-Fi 6, and easily accessibly BIOS flashback and Clear CMOS buttons on the rear I/O. Compared to previous Taichi boards, it also feels more premium, with a metal backplate and shielding for the PCB. However, one thing that's lacking is the number of USB 3.2 (Gen 2) ports. It only has two of these, including one Type-C port, while the rest are slower Gen 1 connectors. It also doesn't have any headers for measuring water flow and has comparatively fewer fan headers than the competition, although its five chassis fan headers should be enough for most folks. In addition, each chassis fan header also supports fans up to 2A, which is a step above what most of the other boards are able to accommodate outside of specific high amperage headers.

The VRM design isn't quite as impressive as what you get on the other boards either, but that's to be expected because of the price. However, the issues I experienced with boot-up after applying the memory XMP profiles, and the less than ideal placement of the front panel USB-C header, mean that there are still some thorny issues to navigate. 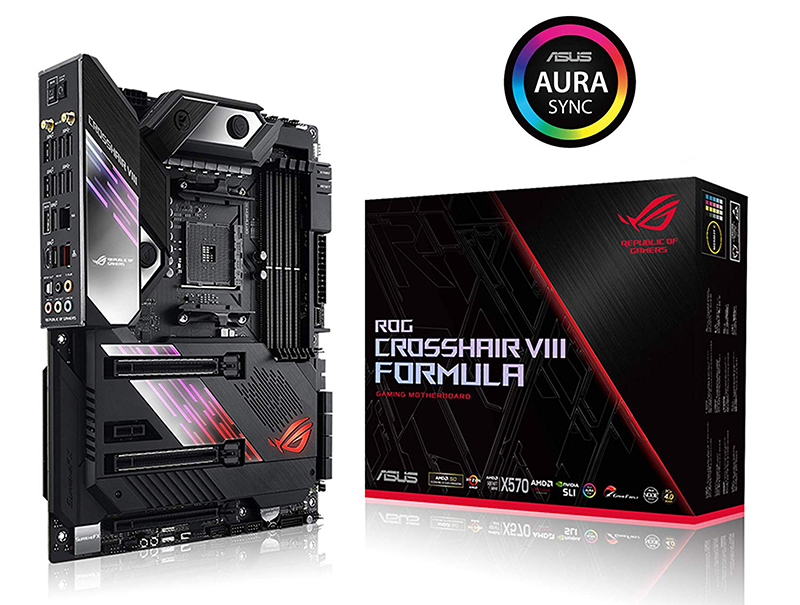 The ROG Crosshair VIII Formula is a really good board that won't let you down. However, I have to question if it's really worth getting it over the Hero (Wi-Fi) model, which shares most of its key specifications and features. For instance, both boards share the same VRM design, so you're not getting more premium components by shelling out for ASUS' flagship board. Elsewhere, while the Formula has an additional USB 3.2 (Gen 1) header and 5GbE LAN port, it otherwise shares the same selection of USB ports and fan headers as the Hero (Wi-Fi).

What the Formula offers over the Hero is basically the ability to cool the VRM using liquid cooling, the fancy LiveDash OLED display, and fuller coverage of the PCB with the plastic shielding. To be fair, the Hero board isn't that much cheaper either, costing S$722 to the Formula's S$862, which makes sense given how much of a feature overlap there is.

Still, it's cheaper and offers mostly the same thing, so you have to decide how much you need the Formula's additional features. With the exception of the liquid-cooling support for the VRM, you're mostly paying for better aesthetics. Furthermore, the beefy VRM heatsinks on high-end motherboards today are generally more than enough to keep the MOSFETs cool, and the liquid cooling support doesn't add a ton of value. All things considered, I think you're better off getting the Hero (Wi-Fi). And if you really want the most technically capable board, the Aorus Xtreme is a better choice. 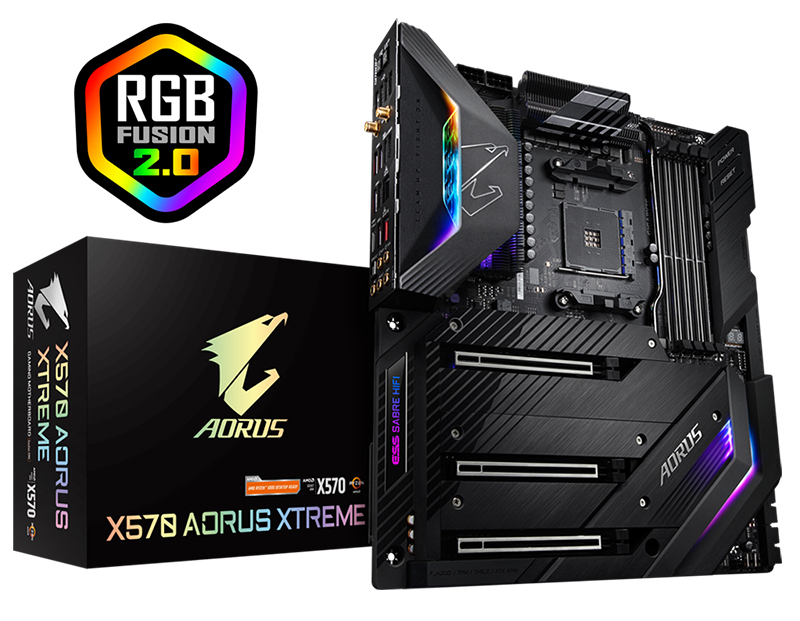 I think Gigabyte has made a smart investment in an area that enthusiasts really care about, and that's overclocking. The Ryzen 3000 chips may not have a ton of overclocking headroom, but if you want to go all out with LN2 overclocking, the X570 Aorus Xtreme has got your back. The true 16-phase VRM is an industry first, and there is currently no X570 board that matches it. If you want the best possible power circuitry, you get the Aorus Xtreme.

At S$965, it's still quite a bit cheaper than the MSI MEG X570 Godlike, while offering, in my opinion, a more robust feature set in an area that enthusiasts will appreciate. It's also managed to include 10G Ethernet connectivity on board without requiring an add-on card like the MSI board. Storage and USB options are similarly robust, and I don't find this board lacking seriously in any way.

To cap things off, it's the only board to not feature active cooling for the chipset. The entire board acts as a heatsink, a design that works quite well, so you don't have to worry about noise or fiddling with an extra fan curve. All things considered, I think the Aorus Xtreme is quite the standout board here, even in a field of uniformly excellent competitors. 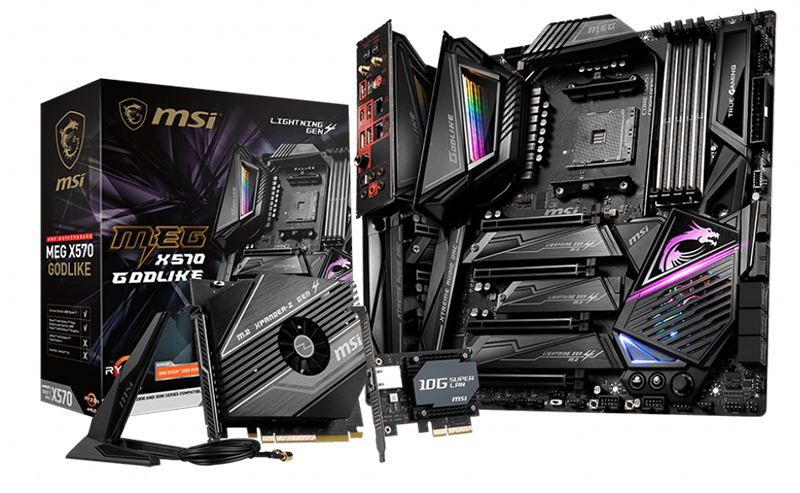 Overall, I'm not sure what this board has exactly that justifies its S$1,269 price tag. It certainly has some very cool features, such as the mirror reflection effect on the I/O shroud and the onboard OLED display. MSI hasn't skimped on quality and features either, and you get top-notch components used in the VRM design, individual heatsinks for all three M.2 sockets, and support for semi-passive operation on the chipset fan. On top of that, MSI has gone all in with the expansion card options, boasting a 10G Ethernet card and the M.2 Xpander-Z card that holds two more PCIe 4.0 drives.

However, it feels like you're paying extra for expansion cards that you probably won't use. After all, do you actually have 10G internet and five M.2 devices? I'm not discounting the fact that some folks will actually be able to take advantage of both these features, but I'm pretty sure they comprise a very small subset of users. I'd much rather have them available separately as add-on options and then pay for them if I need them.

The X570 Godlike is a great motherboard. I just don't like the idea of paying for features that I didn't ask for and don't need. What's more, the ASUS ROG Crosshair VIII Formula and Gigabyte X570 Aorus Xtreme, which are arguably the Godlike's closest competition, cost S$862 and S$965 respectively while offering a very similar feature set.

Which board should you get?

I originally thought it would be difficult to tease out a winner, but that's actually not the case now. The Gigabyte X570 Aorus Xtreme is quite clearly a cut above the rest here, boasting premium features like a true 16-phase VRM design, onboard 10G Ethernet, and passive cooling for the PCH that does away with noise entirely. The VRM implementation and passive chipset cooling are things that no other X570 board has, so the Aorus Xtreme is entirely unique in this respect.