Here are our favourite new features in iOS 15
Shootouts 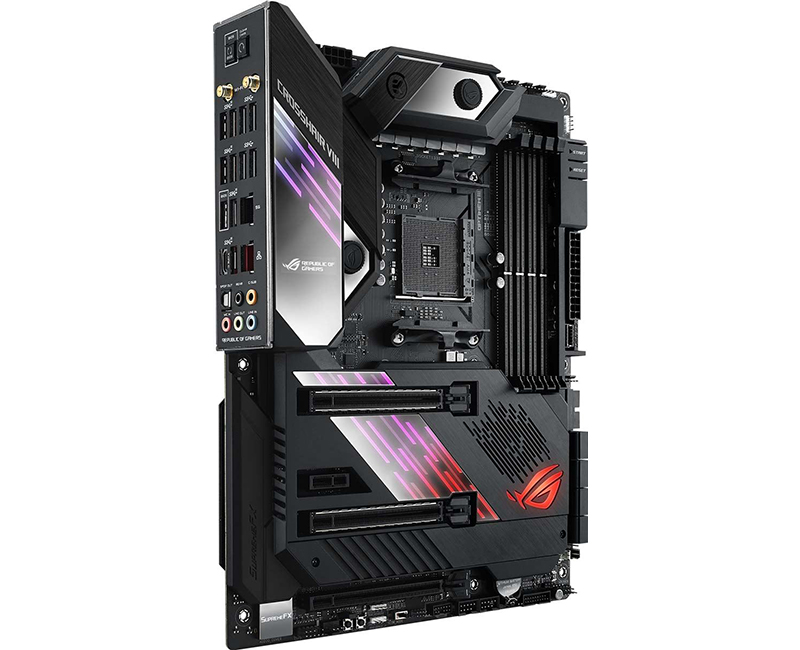 The ASUS ROG Crosshair VIII Formula is ASUS' flagship X570 motherboard and its highest-end AM4 board to date. There isn't even a Crosshair VII Formula board to draw comparisons with and the highest-end X470 board from ASUS is probably the ROG Crosshair VII Hero (Wi-Fi). At S$862, the Formula is competing with the best of the best, and it features a ton of features geared toward the most serious enthusiasts, with the ability to integrate a custom liquid cooling loop into the VRM heatsink and even an LN2 Mode switch.

Having said that, I should point out that there are a lot of similarities with the Crosshair VIII Hero (Wi-Fi), which is only slightly cheaper at S$722. Why would you get this board over the latter? That's a question I'm still trying to answer, and I believe it comes down mostly to aesthetics, liquid cooling support, and that fancy LiveDash OLED display. 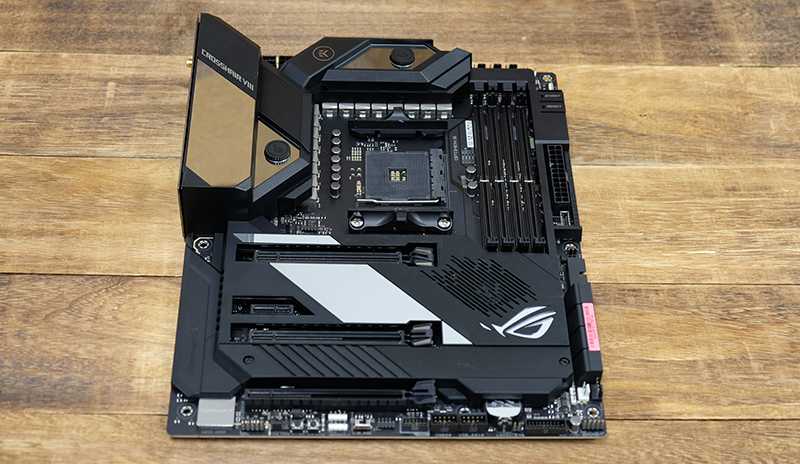 The Formula boasts a full-coverage shroud over most of the PCB, and even the power and reset buttons have a shroud built over them for a cleaner and more elegant look.

The 1.3-inch LiveDash OLED display sits on the I/O cover and can show you useful information such as the power status and error codes for the CPU, memory, or graphics hardware. It's useful for some quick troubleshooting, but you can also upload your custom logos or animations and have them displayed on your motherboard.

Compared to the Hero (Wi-Fi), the Formula also adds a solid steel backplate in a stealthy black that helps reinforce the PCB to prevent bending. 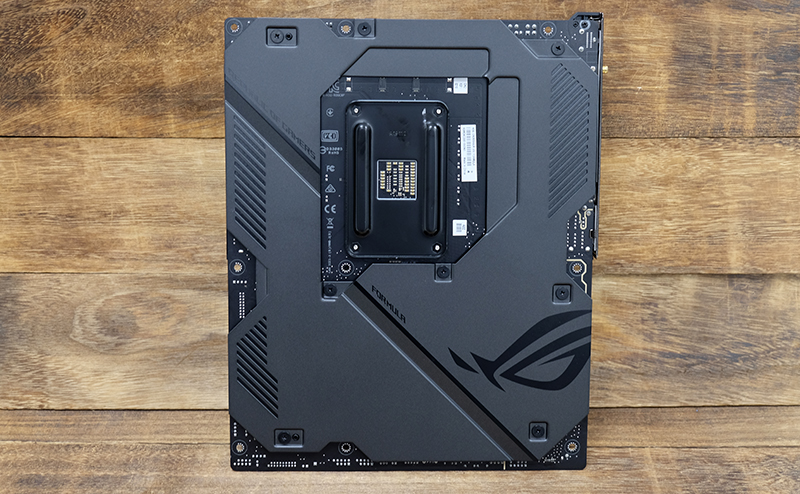 In terms of expansion slots, it has three PCIe 4.0 x16 and a single PCIe 4.0 x1 slot. Only the first two x16 slots come directly from the CPU though, and the third runs in x4 mode and draws on lanes from the X570 chipset. Like most other boards today, the x16 slots are also reinforced with metal. However, while some of the other boards have this for all the slots, and even the DIMM slots, the Formula has only reinforced the top two slots. 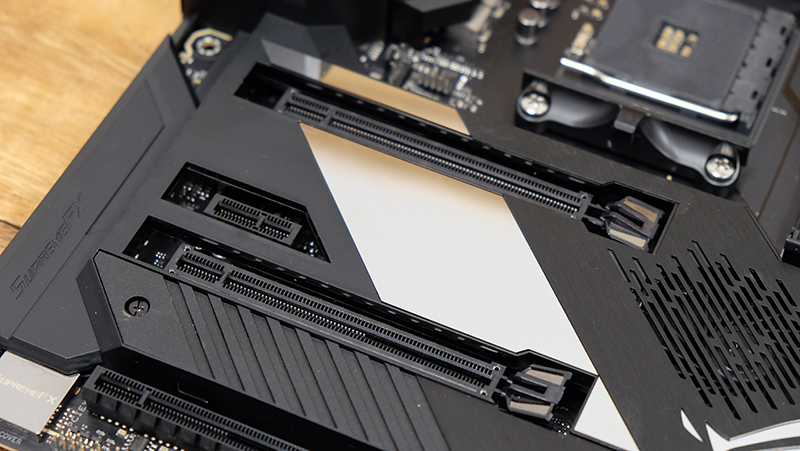 ASUS hasn't bothered to provide any display outputs on the rear I/O, because let's face it, if you're buying the Formula, you're not going to be pairing it with an APU onto it. Instead, the I/O panel is bristling with USB ports, including one USB 3.2 (Gen 2) Type-C, seven USB 3.2 (Gen 2) Type-A, and four USB 3.2 (Gen 1) Type-A ports. You'll also find two RJ-45 jacks, one powered by an Intel I211-AT Gigabit LAN controller and the other by the Aquantia AQC111 5G LAN. Wi-Fi is provided by an Intel Wi-Fi 6 AX200 module, which supports a maximum throughput of up to 2.4Gbps and the latest Wi-Fi 6 standard. 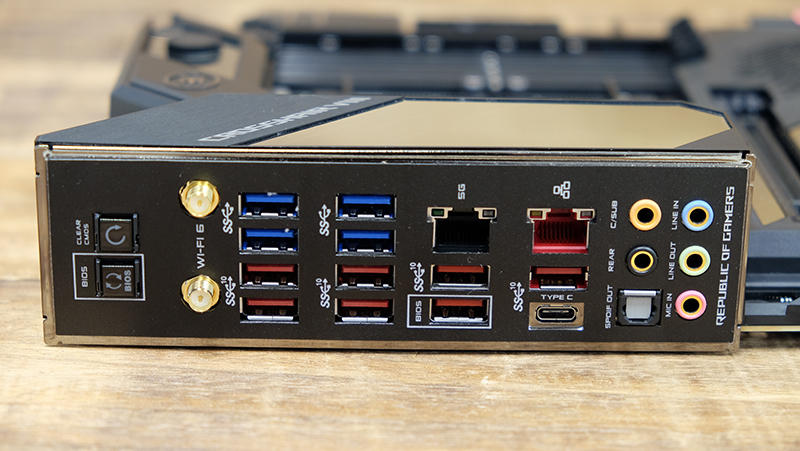 For convenience, there's also a Clear CMOS button here, in addition to a USB Flashback button. The latter is particularly useful for AMD boards, since the company has consistently made backward compatibility a priority with Ryzen.

In terms of front panel connectors, the Formula will output to one USB 3.2 (Gen 2) Type-C, four USB 3.2 (Gen 1) Type-A, and four more USB 2.0 ports. The board features an integrated I/O shield as well to help simplify the installation process. 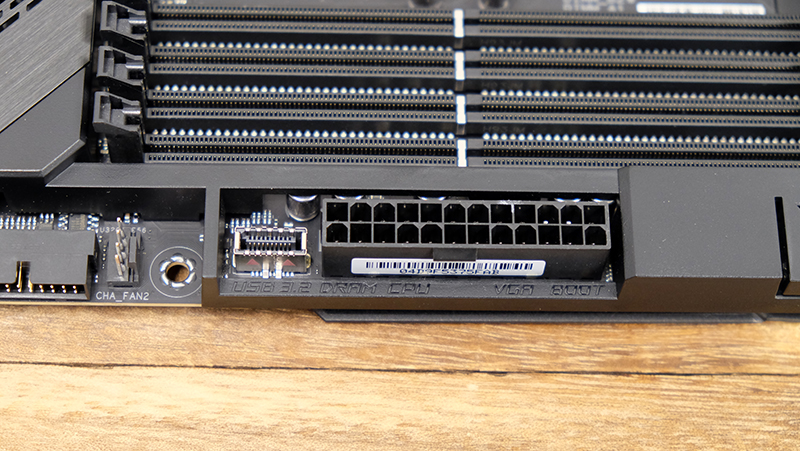 Storage options are pretty good too, comprising two M.2 sockets, both of which support PCIe 4.0 and SATA drives. They are paired with eight SATA 6Gbps ports, which together with the second M.2 socket, draw lanes from the X570 chipset. Like the other boards here though, the M.2 sockets are hidden beneath the shroud, so you'll have to remove some screws to get at them. 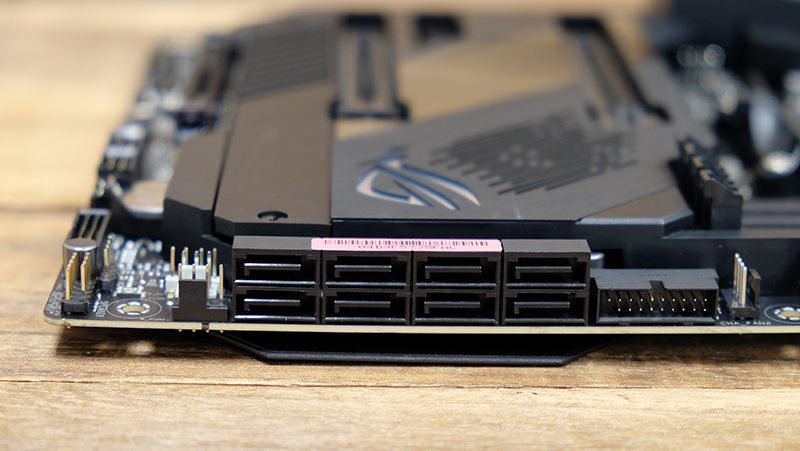 Are your drives going to suffocate under there? At the very least, ASUS has included aluminum heatsinks to go with them, so there's some form of heat dissipation available. 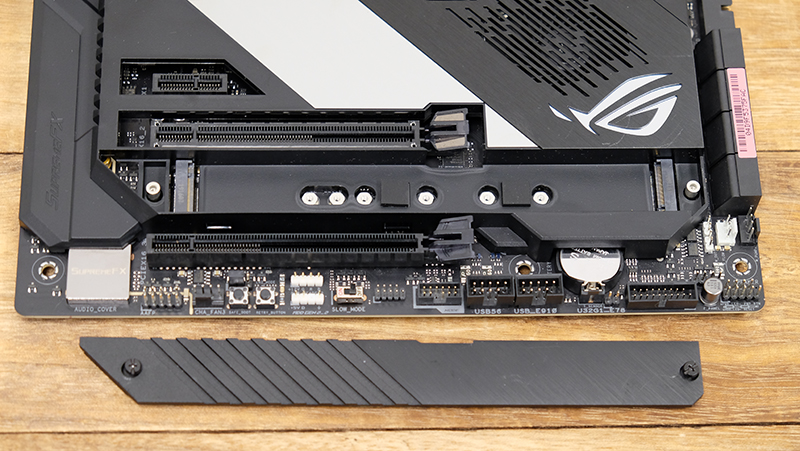 ASUS pretty much has a dedicated fan header for everything, including clearly labeled CPU and CPU OPT connectors, three chassis fan headers, one AIO pump, one H_AMP, and one water pump connector. Each of these will take up to 1A fans, although the H_AMP and water pump headers will work with up to 3A fans. 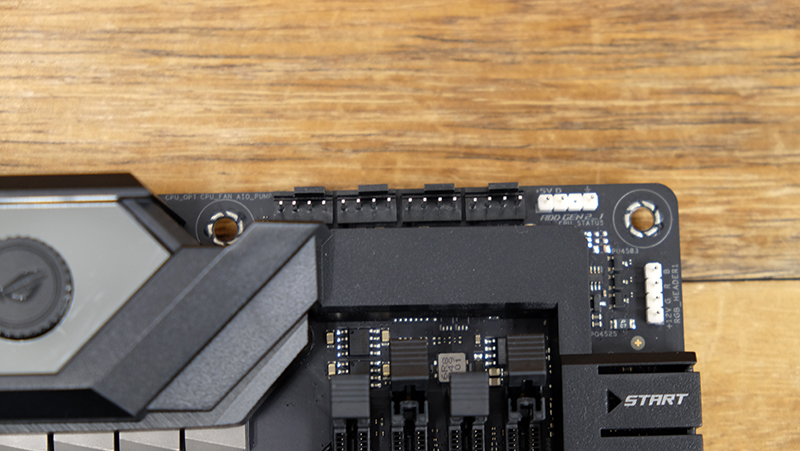 When it comes to cooling, the biggest feature of the Formula board is EK's CrossChill EK III hybrid cooler, which covers the VRM with a combined water block and heat sink. You can either connect it to a custom liquid cooling loop or use it as-is with an air cooling solution. According to ASUS, the new design also offers wider copper channels than before and a large copper surface area for heat transfer.

If the board's built in RGB lighting isn't enough for you, you can hook up LED strips to the two Aura RGB and two addressable headers.

To cater to extreme overclockers, the Formula also comes with Safe Boot and ReTry buttons and a Slow Mode switch. They all do slightly different things, but one thing they have in common is that they help you get around boot failures. 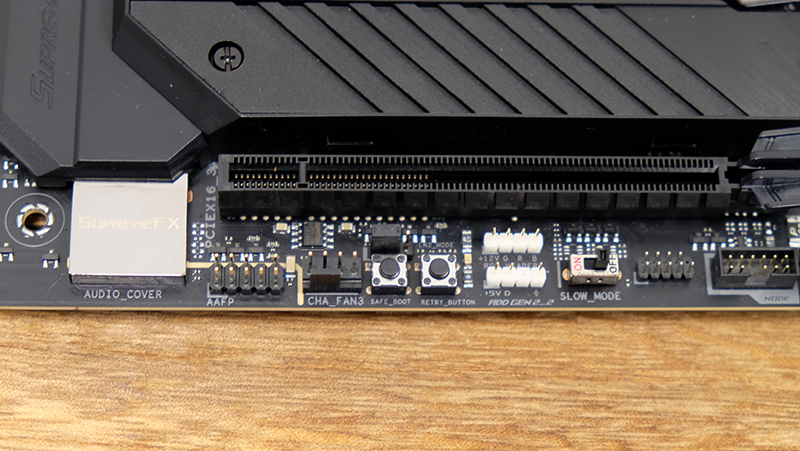 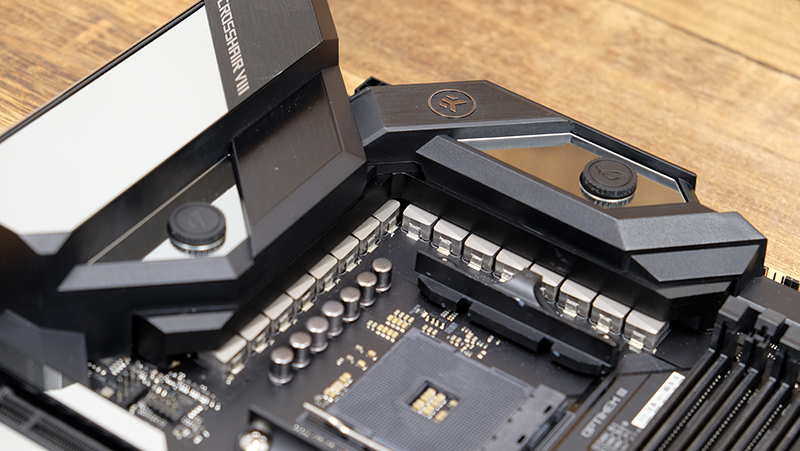 The VRM uses a 14+2-phase design with 8 true phases. It comprises of 16 Infineon PowlRstage IR3555 MOSFETs, each rated to handle up to 60A. Each MOSFET is accompanied by a high-permeability alloy-core choke rated for 45A, and paired with solid-polymer capacitors that generally last longer than their electrolytic counterparts.

ASUS hasn't used any phase doublers here, but there are still only 8 true phases because of its use of a parallel rail design. 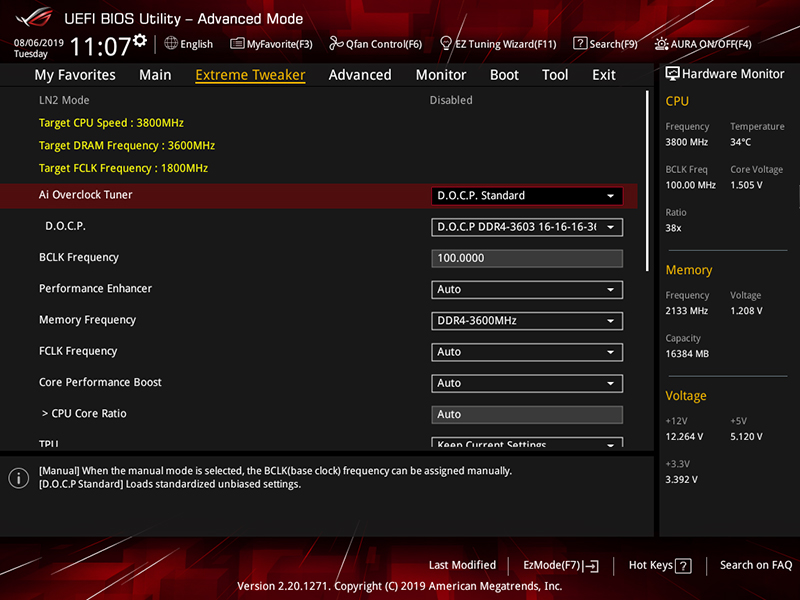 ASUS generally has one of my favorite BIOS interfaces, and the Formula isn't much different. The layout doesn't feel too cramped and is easy on the eyes, and all the options are clearly labelled and where you might expect to find them.

However, you might get a little confused if you're looking for the XMP option. ASUS refers to this as D.O.C.P, but they really do the same thing.

The options for Precision Boost Overdrive are located under the Advanced tab, in case you want to try to improve the performance of your processor.