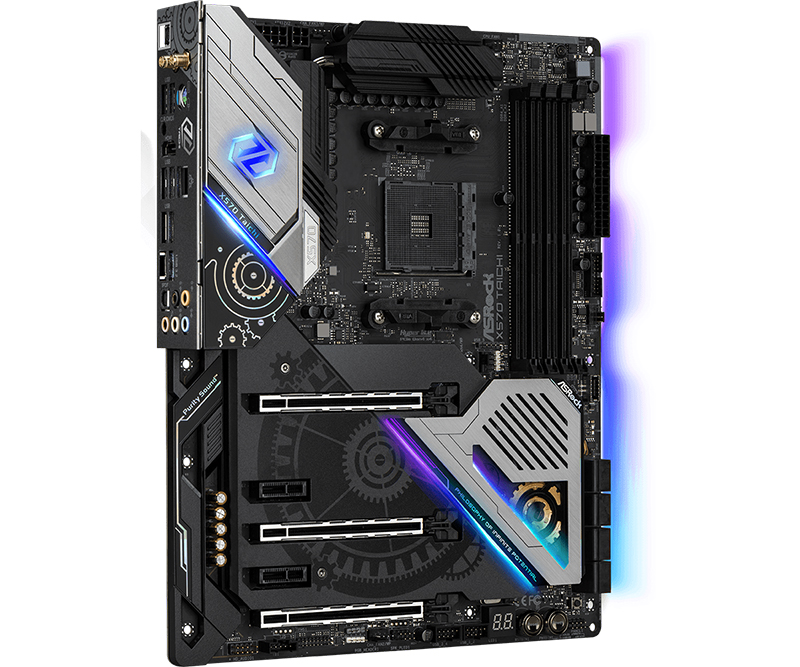 The ASRock X570 Taichi is the most down-to-earth board in this shootout. As far as flagship boards go, it's super affordable at just S$499, but the price should give you an inkling that it isn't really competing in the same league as the others. I should also point out that ASRock does have a more premium X570 model, the X570 Aqua, but that's a limited edition board with only 999 units made. For all intents and purposes, the X570 Taichi is ASRock's top X570 board that you'll actually be able to buy. 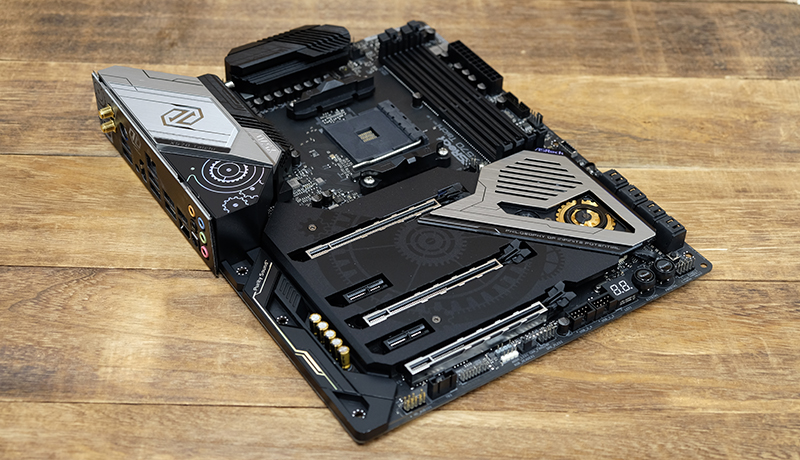 ASRock has long been the brand you go to if you want to get the most bang for your buck, but this may be one of the fanciest Taichi boards I've seen so far. One of the biggest changes coming from the X470 model is the addition of the plastic shroud over most of the PCB and also a back cover as well. The familiar Taichi cogwheel is printed on this shroud instead of the PCB itself, and there are RGB LEDs built into the I/O cover, chipset heatsink, and the right edge of the board. The aluminum backplate also helps shore up the structural integrity of the board and conveys a more premium feel. 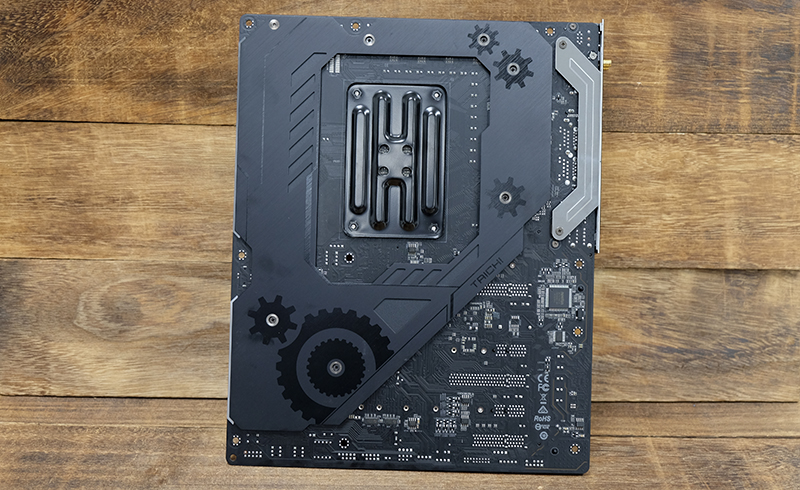 Like most other X570 boards, the Taichi comes with active cooling for the chipset and an aluminum alloy top cover that doubles as a passive heatsink. The 6,000RPM fan can get quite noisy at full speed, but ASRock has fortunately added options that let you tame the fan.

That's a nice step up in terms of aesthetics, but it does sacrifice a bit in terms of usability and ease of access to the M.2 sockets. The board has three M.2 sockets in total, two of which support both PCIe 4.0 and SATA devices and a third which supports only PCIe drives. They are all hidden underneath a protective shroud, and you'll have to remove three screws and take off the shroud to get at them. That would have been okay if the screws could have been opened by regular a Phillips screwdriver, but I had to use a Torx T9 screwdriver to get them out. 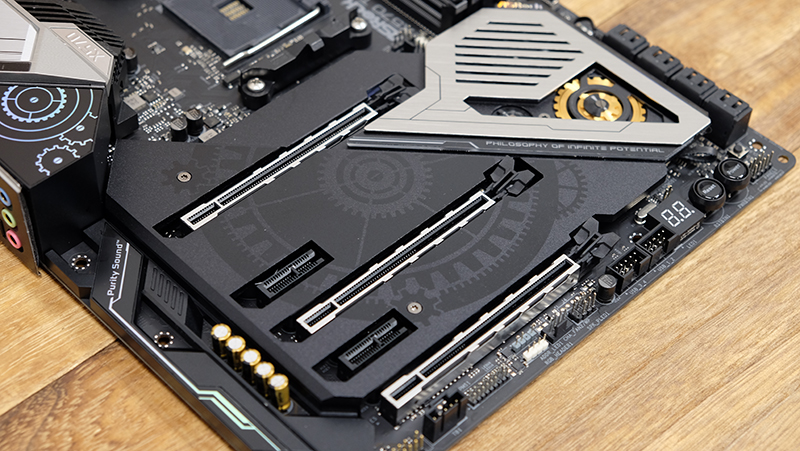 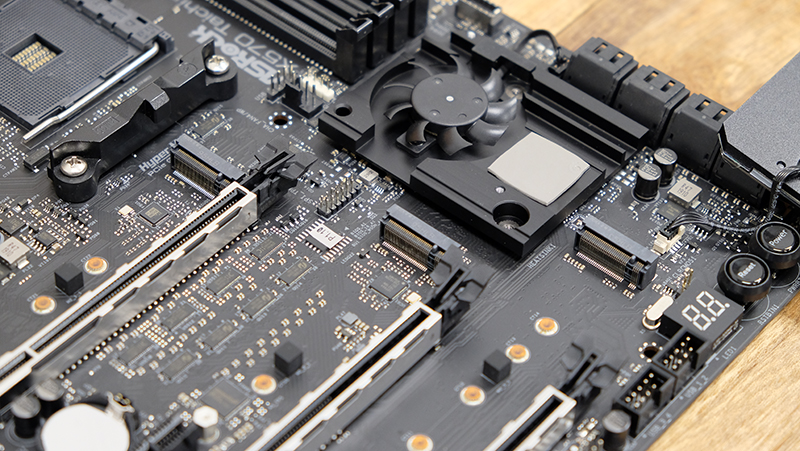 The third M.2 socket also shares PCIe lanes with the third PCIe slot, so you can't use both of them at the same time. Elsewhere, the X570 Taichi features eight SATA 6Gbps ports, which should be more than enough for most people. 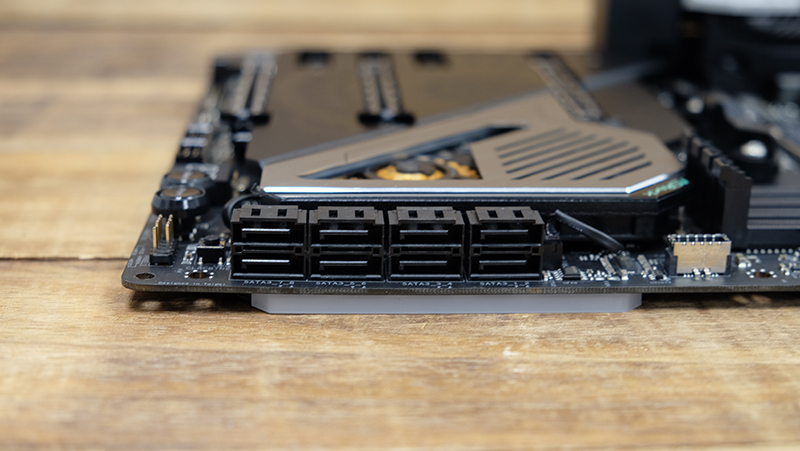 Another new addition is the upgraded Wi-Fi module. The Taichi now has Intel's Wi-Fi 6 AX200 adapter, which supports speeds up to 2.4Gbps. That's paired with a Gigabit Ethernet port on the rear, powered by an Intel I211-AT controller.

Compared to the X470 Taichi, the I/O panel now has an integrated I/O shield to make the installation process slightly simpler. ASRock threw in a BIOS update button as well, and there's also a dedicated Clear CMOS button. Other than that, however, not much has changed in terms of the rear connector offerings, and you're still getting one USB 3.2 (Gen 2) Type-A, one USB 3.1 (Gen 2) Type-C, and six USB 3.2 (Gen 1) Type-A ports. I'd have liked the Clear CMOS button to be more easily accessible though, but unless you're often fiddling with the CMOS and BIOS updates, you might prefer it in its current form to avoid pressing it inadvertently. 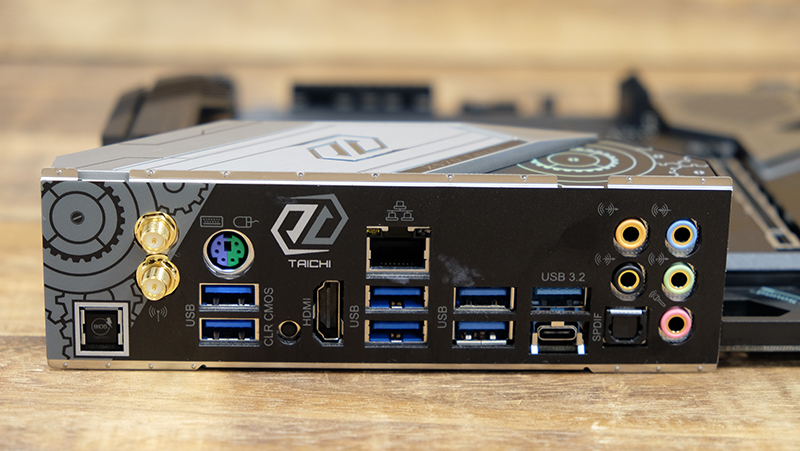 All things considered, that's a little disappointing since the AMD X570 chipset and Ryzen 3000 processors both support up to four USB 3.2 (Gen 2) ports. But like Intel, AMD is implementing a flexible I/O configuration on X570, so board makers have some freedom to choose what they want to include. That said, it looks like ASRock wants to keep costs down instead of going all out with the high-speed USB ports.

In terms of front-panel headers, the X570 Taichi will output to a USB 3.2 (Gen 2) Type-C connector, in addition to two USB 3.2 (Gen 1) ports and four USB 2.0 ports. However, one thing to note is that the USB-C header is located directly in line with the top PCIe 4.0 x16 slot, which means it actually interferes with the installation of the GPU if it is in use. This is not a problem if you don't need the USB-C header, but seeing as many modern cases feature a USB-C port on the front, this might actually be an issue. 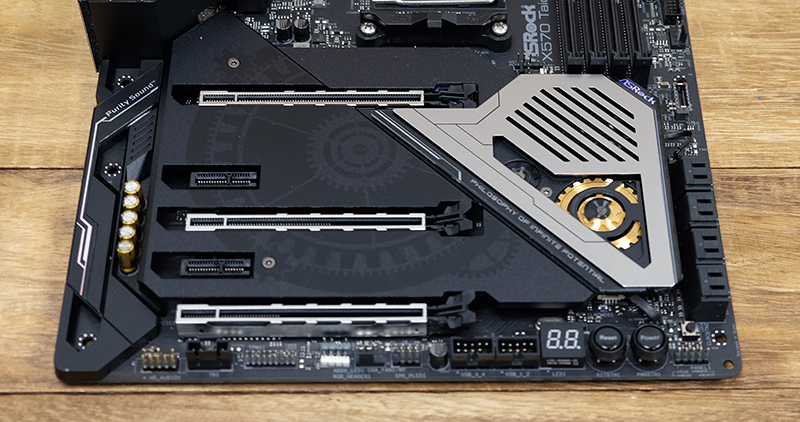 Finally, the motherboard features three PCIe 4.0 x16 and two PCIe 4.0 x1 slots, with support for NVIDIA SLI or 3-way CrossFireX. As is pretty much the norm now, they're also all reinforced by steel and ASRock says they have extra anchor points to maintain signal stability and hold up the larger and heavier graphics cards.

The Taichi doesn't have the richest offering when it comes to fan headers, but you still get four 4-pin fan connectors for chassis fans and separate headers for the CPU and water pump fans. With the exception of the 1A CPU fan header, all the other headers fans can handle up to 2A, which is pretty decent. 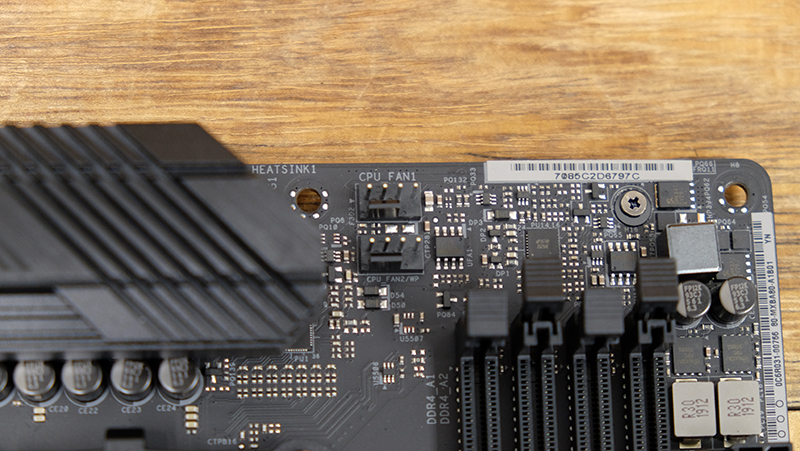 The board also has three separate LED headers, with distinct labels such as the AMD fan LED header, RGB LED header, and addressable LED header. The AMD fan header is meant for the RGB LED cable that comes with AMD's Wraith Prism cooler, but it'll take any LED strip with a maximum load of up to 3A and length of 2.5m.

At the bottom right, you'll find the power and reset buttons and debug LED, in addition to another Clear CMOS button, the system panel header, front panel USB 2.0 connectors, and RGB LED headers. 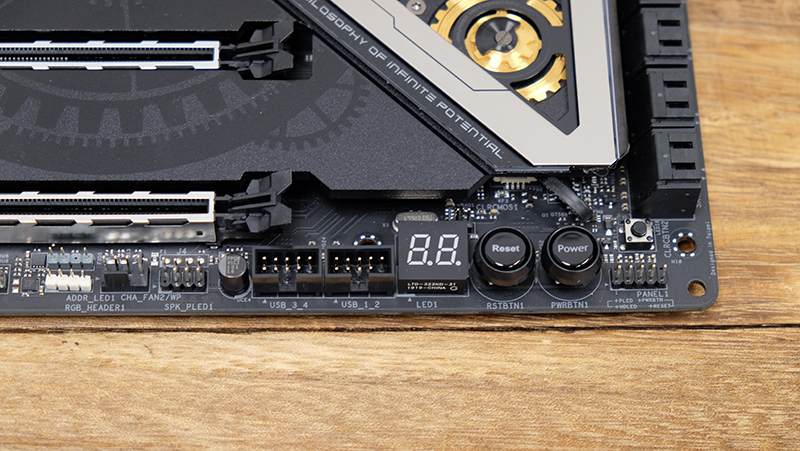 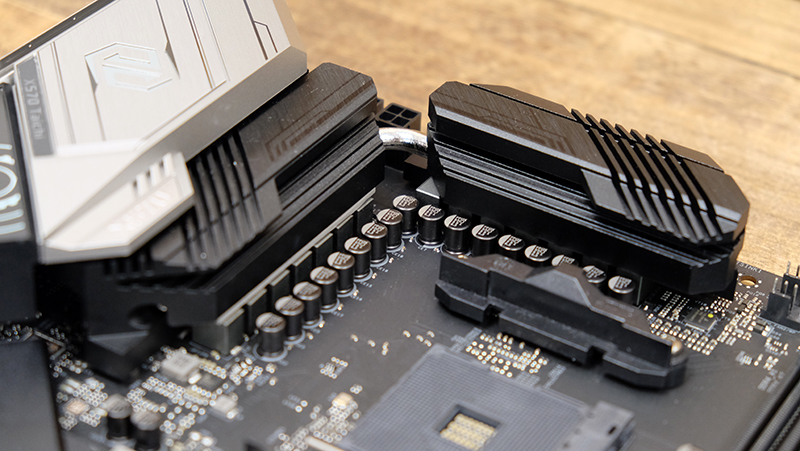 The VRM uses a 12+2-phase configuration, but it uses Intersil ISL6617A doublers to get up to 14 phases for both the CPU and SoC. It only has 6+1 true phases, but ASRock has installed 14 50A MOSFETs, 60A chokes, and Nichicon 12K capacitors, so that's some quality stuff right there. That's topped off by an extra-large aluminum alloy heatsink that soaks up heat from the MOSFETs and chipset. 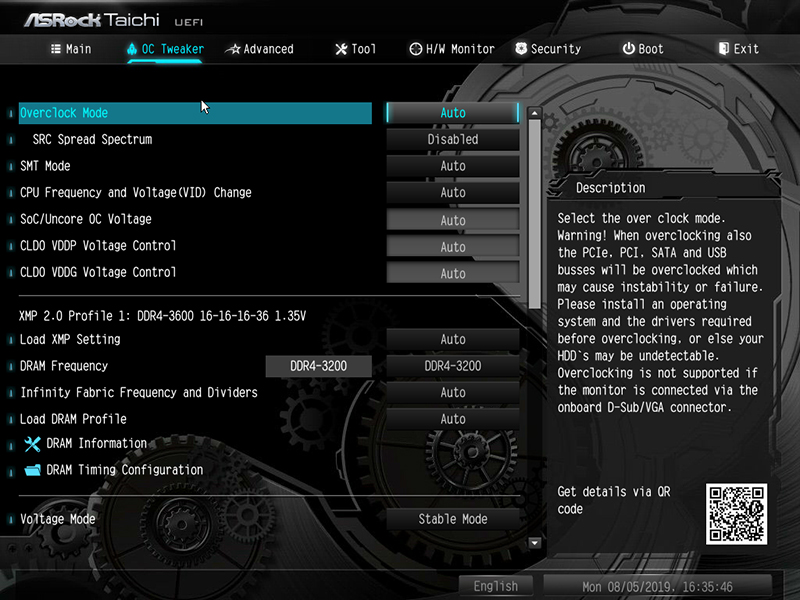 The Taichi's BIOS is reasonably easy to navigate, with clear headers that show you where to find the setting you're looking for. At the time of writing, ASRock is also one of the first to have ready a BIOS update that fixes the issues Ryzen 3000 has with running Destiny 2.

However, I ran into some issues loading the XMP profile for my G.Skill Trident Z Royal memory that would have ramped it up to 3,600MHz. The system just refused to boot afterward, and I could only get around it after clearing CMOS and setting the speed to a more modest 3,200MHz instead.

The H/W Monitor section also contains the settings for adjusting the chipset fan, and you can quite easily set a custom fan curve of sorts or pick from one of the other presets, including Silent, Standard, or Performance. 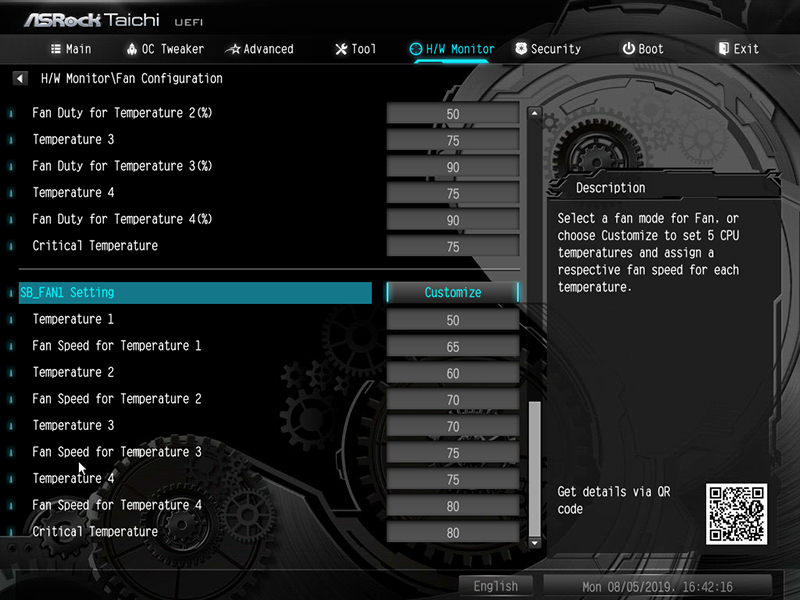