Are the chips boosting properly?

Does Ryzen boost properly on these boards?

The Ryzen 3000 processors have generally been considered quite the triumph for AMD, but there have also been teething problems, such as complaints that the chips weren't boosting to their rated specifications, even on a single core. There's were also reports of abnormally high idle voltages, although that appears to have been mostly resolved.

For this shootout, we're going to focus on the behaviour of the Ryzen 9 3900X in each board instead of our usual benchmark suite. That's because performance is so similar between motherboards these days that you're mostly reduced to haggling over minuscule differences, when in actuality the differences in features matter more.

Ryzen 3000's boosting issues vary from board to board, so we'll take a look at how the Ryzen 9 3900X plays with each board and whether or not you should expect to wait for a BIOS update to fix the problem.

The BIOS versions we used for each board are as follows:

I should point out that both the ASRock and Gigabyte BIOSes already feature the latest AGESA 1.0.0.3 ABB microcode updates, which contains fixes for Destiny 2. After I completed my testing however, ASUS released a BIOS update, version 0803, that also contains the updates. At the time of writing however, MSI has yet to roll out a newer version with the fixes.

To check for idle voltages, I closed all background programs and only opened CPU-Z while running the Ryzen Balanced power plan. I then read the core voltage from the monitoring panel. Next, when checking for the maximum boost clock, I switched to the Ryzen High Performance plan and ran Cinebench R20's single-threaded benchmark. Clock speed information was taken from HWiNFO.

For idle voltages, anything below 1V is considered normal, so all the boards don't have any issues in this area. Even so, it's interesting to note how much lower the idle voltages are on the Gigabyte board.

However, with regard to boost clocks, only the ASRock and MSI models managed to hit 4,600MHz or higher, which is the official boost clock for the Ryzen 9 3900X. You'll also notice that there doesn't seem to be any correlation between the AGESA 1.0.0.3 ABB update and hitting the rated specifications, since MSI's BIOS hasn't incorporated those updates yet but ASRock's has.

To be fair, AMD didn't say anything about fixing the boost clocks when it rolled out this update, so it looks like it very much depends on individual board makers to implement their own fixes rather than a cure-all from AMD's side.

How about some benchmark numbers?

Having said that, I think we might be really splitting hairs here, and there also doesn't seem to be a correlation between boost clocks and performance in Cinebench R20. Oddly enough, even though the MSI MEG X570 Godlike could boost above 4,600MHz, it also had the lowest single-threaded score.

Furthermore, Precision Boost Overdrive (PBO) and Auto Overclocking don't seem to make much of a difference, and nowhere did I see the Ryzen 9 3900X coming close to 4,800MHz (Auto OC is supposed to enable up to a 200MHz increase over the maximum boost clock), even with the Thermaltake Water 3.0 360 Riing RGB Edition cooler. Granted, Auto OC is not intended to be taken as a guarantee of higher clock speeds, so you sort of have to just live with whatever you get.

To recap, PBO raises three power parameters – PPT, TDC, and EDC – in order to allow the CPU to maintain boost clocks for longer and more often, in theory. The default limits for a 105W chip like the Ryzen 9 3900X are 142W for PPT, 95A for TDC, and 140A for EDC. Enabling PBO raises the limits on each board, and the variance in the table below shows that board makers are pretty much free to set the numbers based on what they expect the board to be capable of. 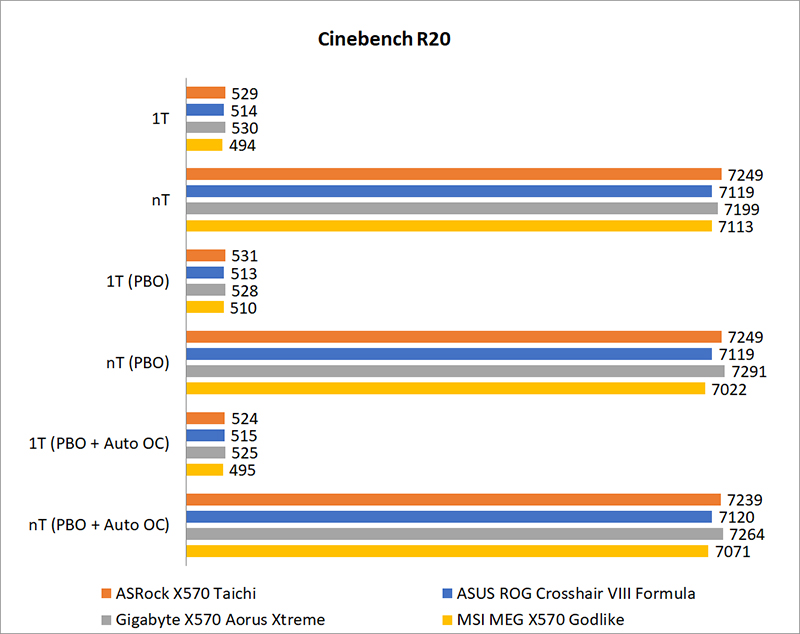 Despite the ASUS ROG Crosshair VIII Formula having vastly lower PBO limits than everyone else, that doesn't seem to have made a difference in terms of performance, and there were generally no vast improvements to speak of. That said, because PBO also raises thermal limits, it will have less of an effect on CPUs that already have a good cooling solution installed, so it's possible that you might see a bigger difference with something like the stock Wraith Prism cooler.

In most cases, performance was mostly unchanged (in some cases it even dropped) when comparing between having PBO on or off. The biggest differences were seen with the MSI MEG X570 Godlike's single-threaded performance, where it showed a 3 percent improvement, and the Gigabyte X570 Aorus Xtreme's nearly hundred point boost in the nT benchmark. However, the latter actually only translates to a piddling 1.3 percent improvement, and that's considered a good result, so I think it's safe to say that PBO isn't really much of a differentiator in this case.

The same goes for Auto OC, and even the Gigabyte X570 Aorus Xtreme's true 16-phase design couldn't help it squeeze out more from the Ryzen 9 3900X, although it did help it hit 4,600MHz. Conversely, the MSI board was no longer able to achieve the rated speeds.