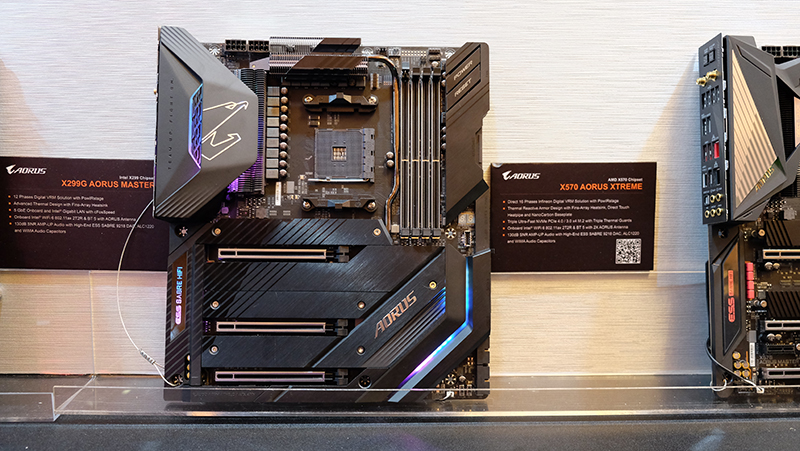 Gigabyte's top X570 motherboard certainly looks the part, with beefy heatsinks, snaking heat pipes, and shielding for the majority of the PCB. Like the other boards featured here, the X570 Aorus Xtreme was designed around overclocking, and it features a 16-phase power delivery subsystem to provide smoother and cleaner power to your Ryzen 3000 processor.

The VRM design has really been the focus of the X570 Aorus Xtreme. In fact, Gigabyte says it is using 16 true phases, none of which are wired in parallel and also without the use of any phase doublers. This direct VRM implementation straight from the Infineon PWM controller is still quite rare today, with many high-end boards still opting for phase doublers to turn an 8-phase VRM into a 16-phase one.

As a simple rule of thumb, the more VRM phases on a motherboard, the more stable the supply of power to the CPU. Each phase produces a burst of power, or pulse, that is staggered from the last, so the higher number of phases ensure that there are fewer troughs in between pulses and a smoother supply of power for the processor. This is particularly vital when you're trying to push a chip to its limits, which is why the X570 Aorus Xtreme looks like it could possibly be the board to get for serious overclockers. Not to mention, the same basics of why more power phases exist is to reduce the power loading levels on each VRM and MOSFET, and lower operating temps for higher efficiency to increase your chances for a successful extreme overclock.

The motherboard uses Infineon TDA21472 PowlRstage MOSFETs that are capable of providing at least 70A of power, for a total of up to 1,120A. Gigabyte says it's trying to ensure that power design will never be a bottleneck for the X570 Aorus Xtreme, and it's pairing its souped-up VRM with dual 8-pin CPU connectors and a 2x copper PCB that supposedly provides additional power trace paths between components to handle higher power loads.

In addition, there's an extra 6-pin PCIe power connector for the graphics card as well.

But with overclocking comes plenty of heat, which is where Gigabyte's so-called Thermal Reactive Armor comes in. One surprising thing to note is that the X570 chipset is only passively cooled on this board. However, while it may lack the integrated fan found on other boards, it tries to make up for that with a multi-layered chipset heatsink that is connected by a heat pipe to the extensive heat sink fin array that cools the VRM. 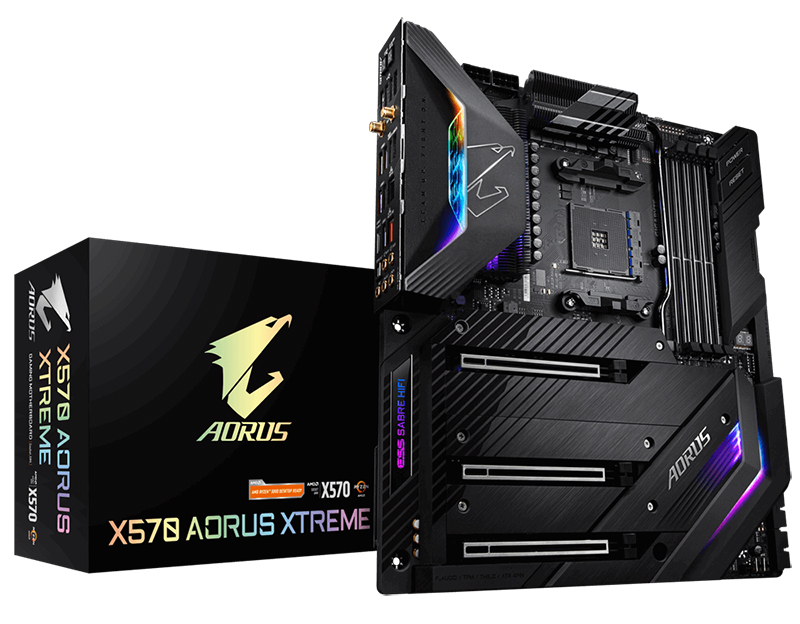 The back of the board also features an aluminum base plate that also acts as a heat sink for the rear of the PCB. A thin layer of what Gigabyte refers to as NanoCarbon is further coated on the base plate through electrostatic adhesion to improve thermal radiation. In fact, the company says this can lower the temperatures of PWM components on the motherboard's back by up to 10 per cent.

One of the reasons why Gigabyte chose to omit any integrated fans in the I/O cover or chipset heat sink is noise. As it turns out, the company is so concerned about staying quiet that it's bundling a noise detection cable with the board to help you monitor your overall system noise and adjust fan speeds accordingly. You don't need to worry about privacy though, as the cable doesn't record any sound and only detects sound pressure.

In terms of expansion slots, the X570 Aorus Xtreme has three PCIe 4.0 x16 slots and three M.2 sockets. Each of the latter has its own Thermal Guard heat sink to reduce throttling. In addition, the motherboard also supports DDR4-4400 memory and beyond, an important point considering how sensitive to memory frequencies Ryzen can be.