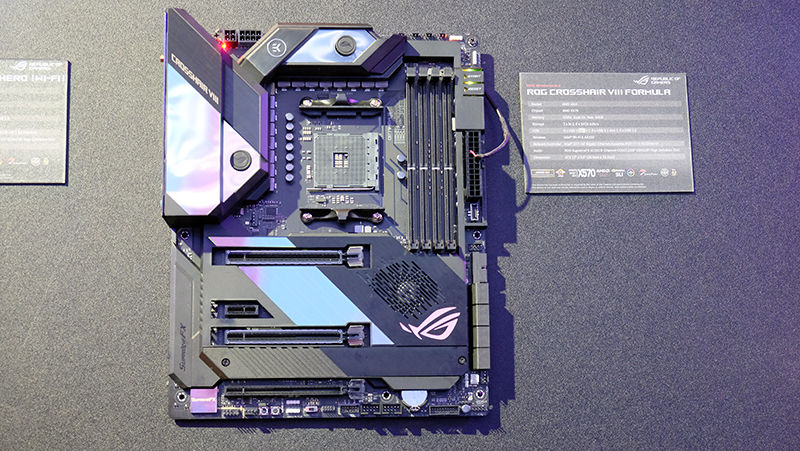 Like the ASRock X570 Aqua, the ASUS Crosshair VIII Formula thinks that liquid cooling is the way to go. It features EK's CrossChill EK III hybrid cooler that covers the VRM with a combined water block and heat sink. This means you can either connect it to a custom liquid cooling loop or use it as-is with an air cooling solution. According to ASUS, the new design also offers wider copper channels than before and a large copper surface area for heat transfer. This is ASUS' flagship X570 offering and it comes jam-packed with features to appeal to enthusiasts hankering after performance.

One thing to note is that there isn't even a Crosshair VII Formula board to draw comparisons with. The highest-end X470 board from ASUS is probably the ROG Crosshair VII Hero (Wi-Fi), and this year's spread of X570 motherboards comprises a far wider selection than before and includes more premium models. This shift is seemingly indicative of ASUS' confidence in AMD and its Ryzen 3000 chips. More importantly, it's not just ASUS that is creating far more impressive AM4 boards than before, and you'll see the same from the other major manufacturers as well.

But the hybrid water block aside, the Crosshair VIII Formula is equipped with a raft of familiar features more commonly found on ASUS' Intel-based motherboards. This includes the LiveDash OLED display, a solid steel backplate for extra structural rigidity, ROG armor protecting the PCB, a ton of independent RGB lighting zones, and even an integrated fan in the chipset heat sink. 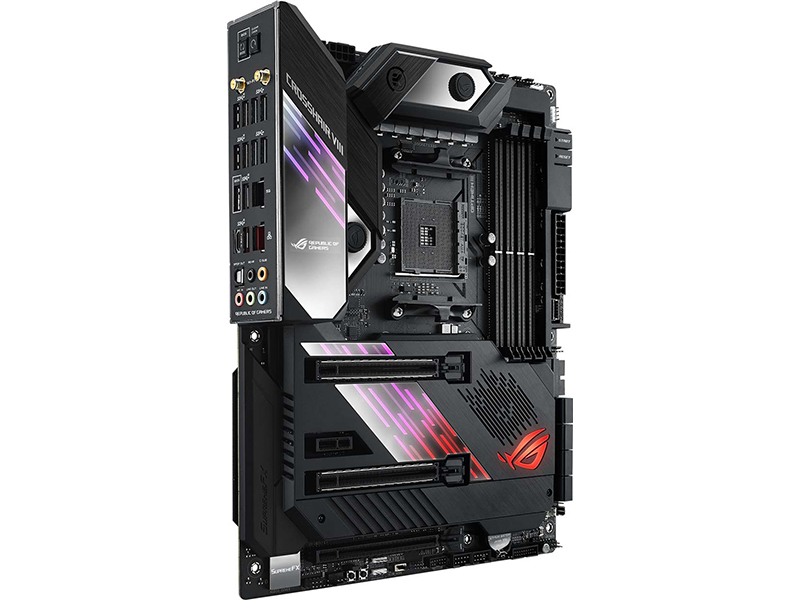 In terms of expansion slots, it has three PCIe 4.0 x16 and a single PCIe 4.0 x1 slot. Only the first two x16 slots come directly from the CPU though, and the third draws on lanes from the X570 chipset.

For storage, you get eight SATA 6Gbps and two M.2 sockets, both of which will support PCIe and SATA drives. Networking options take the form of one Aquantia AQC111C 5G LAN port and a second Gigabit Ethernet port provided by an Intel I211-AT controller. Of course, there's Wi-Fi 6 support as well via the new 2x2 Intel Wi-Fi 6 AX200 adapter.

The onboard audio solution has been beefed up as well, featuring a SupremeFX S1220 codec and an ESS ES9023P DAC.

Finally, given that this is a board for overclockers, the VRM is comprised of 16 IR3555 PowlRstages, each rated to handle up to 60A. Each PowlRstage is accompanied by a high-permeability alloy-core choke rated for 45A, and paired with solid-polymer capacitors that generally last longer than their electrolytic counterparts.