One year after AMD released its 16-core Threadripper 1950X, the company is back with more. While the second-generation Threadripper processors focus on fixing the weaknesses of their predecessors, the flagship products also cram in more cores than ever.

In a single generation, AMD has doubled the number of cores from 16 to 32, a clear sign that its multi-die design and Infinity Fabric interconnect is starting to pay off handsomely. It’s now miles ahead of Intel in terms of multi-threaded performance, and the latter is still stuck at the stage where it’s showcasing hypothetical 28-core overclocked CPUs on stage.

The point is that Intel isn’t anywhere near a multi-core consumer CPU that can properly challenge AMD’s 32-core monster. In the meantime, AMD is already making a play for creative professionals with a shipping product that has access to a wide ecosystem of motherboards and coolers.

What’s new in the way AMD is organizing its Threadripper line-up?

The second-generation Threadripper processors can be divided into two families – the regular X series and a new WX series.

From a marketing standpoint, AMD says the two WX chips are for “creators and innovators”, while the X series chips are for “enthusiasts and gamers”. Of course, those are merely differences in target audience, and there’s nothing stopping a gamer from going for the flagship Threadripper 2990WX as all the chips drop into the same X399 motherboards.

Still, this differentiation is new for AMD, and by creating a product family expressly geared for workstations, AMD is probably hoping to appeal to even more hardcore content creators. How does the architecture of the new Threadripper chips differ from their predecessors?

At their core, not much has changed. They are based on an optimized Zen+ architecture, which feature a series of improvements meant to improve performance in latency-sensitive tasks.

These changes can be summarized as follows:

In addition, they use GlobalFoundries’ newer 12nm process, which offers transistor performance that is around 10 to 15 per cent better than preceding nodes, according to AMD. While 14nm Zen was optimized for transistor density, the 12nm Zen+ was optimized for power and efficiency. This allows for an extended range of clock speeds and reduces the required current – roughly an 80 to 120mV reduction in core voltage – at all frequencies. In practice, this means that the Threadripper 2950X chip can clock up to 4.4GHz, compared to the 4.0GHz on the 1950X.

Are there any new features? While these limits are on the more conservative side by default to accommodate trying conditions such as hotter and more humid climates, users will be able to exceed the recommended thermal specification with a beefier cooler.

This will allow the processor to boost higher, and the new Extended Frequency Range 2 (XFR2) feature will let the chip run at a higher average frequency. While this capability was restricted to just a small number of cores with the first-generation Ryzen products, XFR2 now operates across any number of cores and threads.

The latter forms the crux of how AMD has been able to so easily double the number of cores in just a single generation. Zen compromises modular 4-core CPU complexes, or CCXes, that are attached to the Infinity Fabric interconnect. This modular approach allows AMD to efficiently scale core, thread, and cache quantities to cater to a range of client, server, and HPC demands.

Each CCX is a natively quad-core module. It houses 64KiB of L1 instruction cache, 64KiB of L1 data cache, and 512KB of dedicated L2 cache per core. It also has 8MB of L3 cache shared across cores.

More than one CCX can be present in a Zen-based product. In the case of the first-generation Ryzen Threadripper, there are two dies containing two CCXes per die for a total of 16 cores. Individual cores in each CCX can be symmetrically disabled to allow for products with fewer cores. For example, the Threadripper 1920X has a 3+3+3+3 configuration.

On the other hand, the 32-core Ryzen Threadripper 2990WX contains a total of four active dies, each with two CCXes. However, only Dies 0 and 2 (also referred to as the IO Dies) provide PCIe lanes and memory channels, with each die supplying 32 PCIe 3.0 lanes and two memory channels.

The other two dies are Compute Dies without local PCIe or DRAM access. Instead, they receive DRAM and PCIe access from the IO Dies via the Infinity Fabric. All dies are connected via a mesh topology at approximately 25GBps. 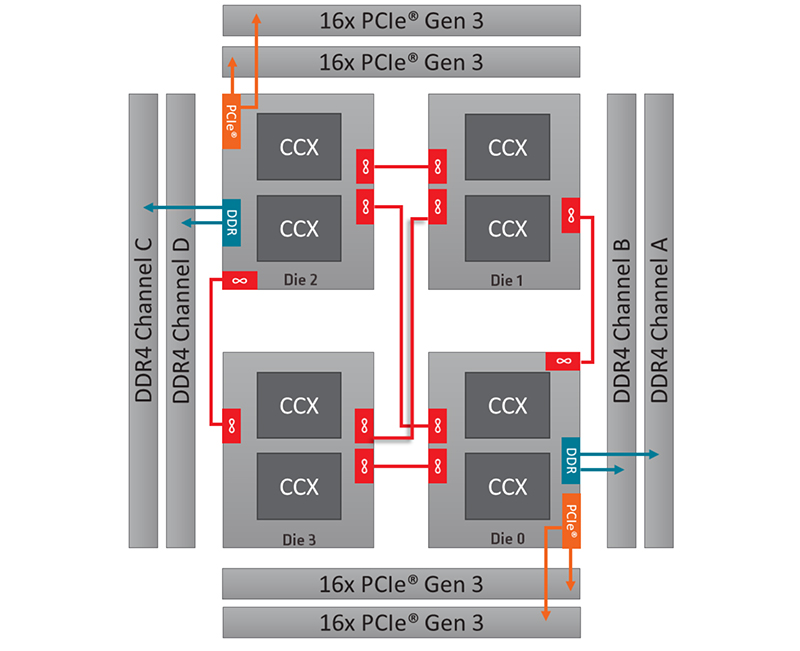 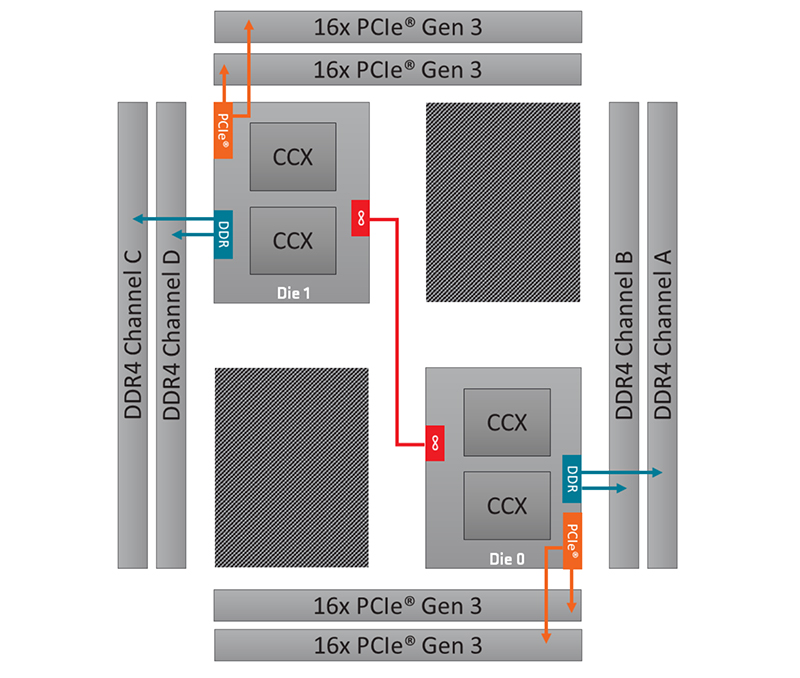 In addition, the 2950X’s topology may be configured into either one large uniform memory access (UMA) domain or two separate non-uniform memory access (NUMA) domains. In UMA mode, threads and DRAM transactions are distributed evenly across the chip to maximize bandwidth. However, in NUMA mode, memory latency is minimized by trying to pair active cores and local DRAM together.

This flexibility allows the 2950X to be configured to suit either gaming or creative performance.

In comparison, the Threadripper 2990WX is targeted at professional content creators, so it is exclusively configured as a NUMA solution.

Finally, will I be able to use my new Threadripper processor in an older X399 motherboard? Yes. All AMD X399 motherboards are fully compatible with the entire second-generation Threadripper line-up, including the 2990WX. However, you will probably need to update the motherboard BIOS.

That said, all available X399 boards support USB flashback for easier BIOS updates, regardless of the processor in the socket. This means all existing X399 boards are drop-in ready for the new Threadripper chips.