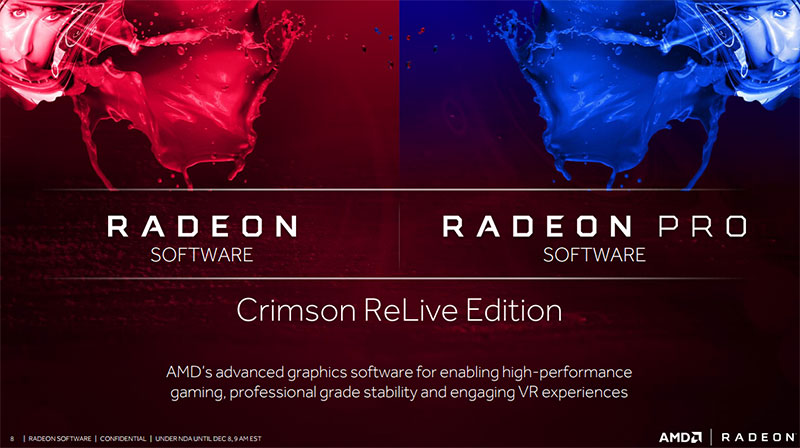 AMD today announced the launch of the next major release of its graphics driver, dubbed the Crimson ReLive Edition. The name actually marks a departure from AMD’s original plan when it first launched its Crimson driver late last year.

Back then, the company said that future major updates to its Radeon Software drivers would be branded a different shade of red, but it decided to stick with the Crimson name – and tack on the ReLive moniker – because of how well-received Crimson has reportedly been.

That said, the Crimson Relive Edition brings several new features to the table, and a bunch of other optimizations and fixes to improve the overall user experience.

This also marks the first time that AMD is introducing Radeon Pro Software, bringing drivers for its professional graphics hardware under the same Radeon Software umbrella. This enables support for AMD’s LiquidVR technology for its professional GPUs, and improves on professional content creation by allowing users to take advantage of integration with game engines.

However, you’re probably interested less in the enterprise side of things, and more on how the new driver will improve your gaming experience. Fortunately, there’s plenty on that end of things as well. Here’s a brief look at what you can expect. 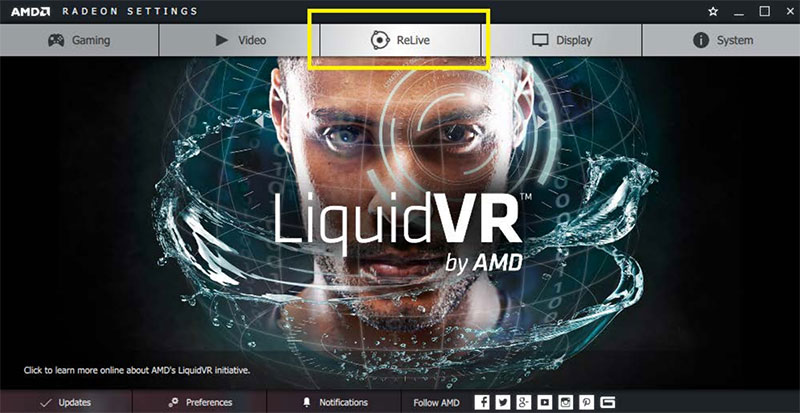 AMD is finally making it easier for you to live stream your games. Radeon ReLive is a new feature in Crimson ReLive Edition, and it exists as a dedicated tab in the Radeon Settings menu. This is essentially AMD’s answer to NVIDIA’s ShadowPlay, and you’ll be able to easily capture in-game screenshots, record your gameplay, or stream it live.

There is also the ability to set custom hotkeys for recording, streaming, and toggling the ReLive overlay. This overlay provides more convenient access to the main features of Radeon ReLive even while you’re in game, and will even let you change the position of the OSD (this appears when you’re recording) or overlay itself on-the-fly. 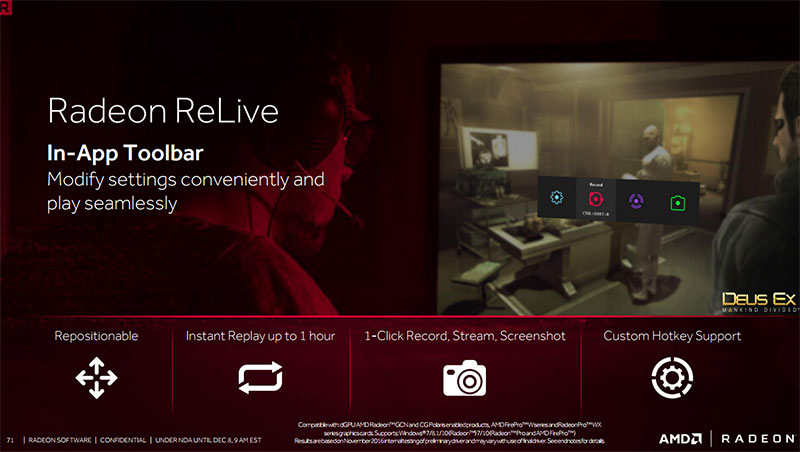 Radeon ReLive supports major streaming platforms like Twitch, but AMD pointed out that it works with lesser known Chinese services like DouYu TV as well. 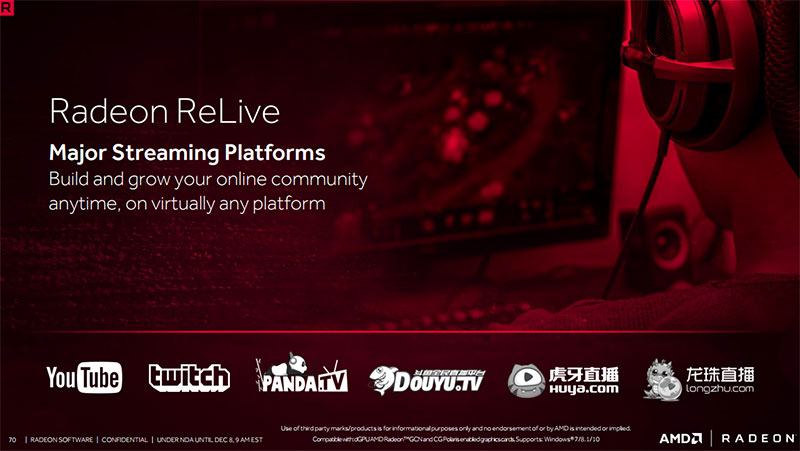 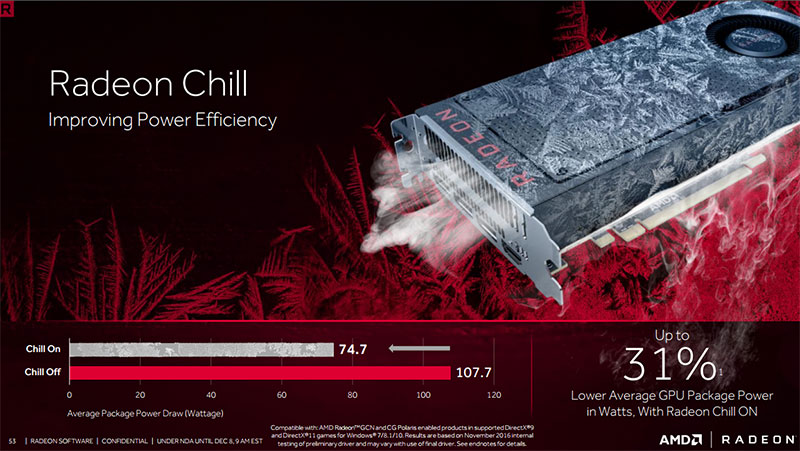 AMD is also introducing something called Radeon Chill, a new feature that reduces GPU power consumption without negatively affecting your gaming experience. It does this via an algorithm that monitors user input and determines whether or not quick motion is happening on screen, such as when you’re tracking enemies in the middle of a firefight.

If it detects that you’re actually standing still in game and the display is mostly static, Radeon Chill automatically scales down frame rates in order to conserve power. But as soon as more movement is detected, frame rates are instantly allowed to go back up, ensuring that gameplay remains smooth and fluid where it matters. AMD stressed that the switch is instantaneous, so performance does not lag in high-intensity situations.

Of course, gamers wary of any mention of frame rate drops will be skeptical of Radeon Chill, but AMD says that in real-world testing, it found that people could not find any qualitative difference between when Radeon Chill was on or off.

The key benefit is the reduction of power consumption (up to 31 per cent lower in some games), temperature, and noise, but you’ll have the option to turn the feature off if you’re still not comfortable with the idea of it. Still, AMD says Radeon Chill can potentially reduce input lag. By not keeping the GPU frame queue full at all times, the GPU is sometimes able to produce a frame even more quickly when required because there is little to no work scheduled ahead of it. 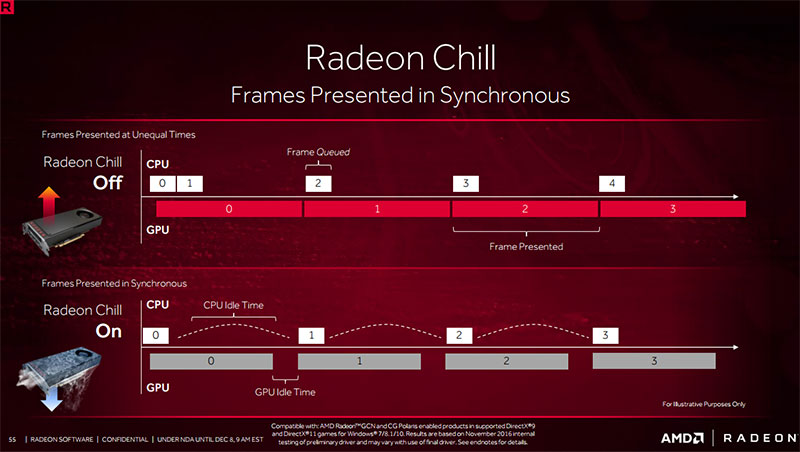 However, Radeon Chill will not work with all games, but supported major titles include Call of Duty: Infinite Warfare, Dark Souls III, Overwatch, and Deus Ex: Mankind Divided. 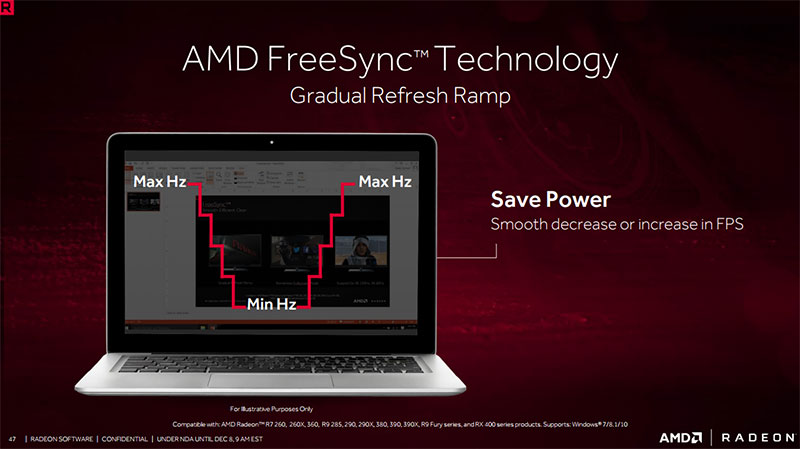 Finally, AMD is adding a new capabilities to FreeSync in the form of gradual refresh rate ramping and support for borderless windowed mode.

Support for borderless windowed mode is more interesting however, because it allows you to Alt-Tab out of game or run multiple displays and still enjoy the benefits of FreeSync in game. Other than an overall more fluid experience, advantages includes things like lower input latencies, because the composition and rendering of frames is better synchronized with the display’s refresh rate. 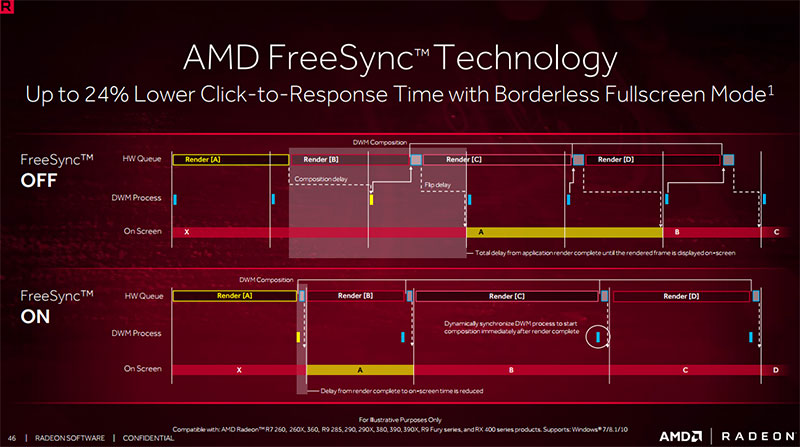 And other bits and bobs…

The Crimson ReLive Edition also comes with a bunch of performance optimizations over the latest Crimson Edition driver. These are generally single digit improvements, for instance a 5 per cent boost in Overwatch, but no one ever said no to a performance increase, however small.

Other additions include a built-in troubleshooter for bad HDMI cables, which automatically detects bad cables, steps through various resolutions and refresh rates to find a working configuration so you don’t just get stuck with a black screen, and then alerts you to the issue.

Unsurprisingly, there’s also now support for both HDR 10 and Dolby Vision for the next generation of displays, video content, and games. HDR is the new darling of display technology, and there’s been a lot of talk about having better quality pixels, instead of just trying to cram more into the same space. Furthermore, the new driver will enable AMD's RX series cards to work with DisplayPort High Bit Rate 3 (HBR3), which unlocks the path to support for 4K 120Hz, 5K 60Hz, and 8K 30Hz signals over a single cable.

And finally, AMD trotted out the Open Capture and Analytics Tool (OCAT), a third-party open-source benchmarking tool with a simple, easy-to-use interface and support for DirectX 11, 12, and Vulkan.

All in all, it's clear that AMD has worked hard to beef up its tool set with this major drive release, with its streaming and recording features, benchmarking tool, enhanced FreeSync capabilities, and Radeon Chill all coming together to provide the best possible experience to gamers. 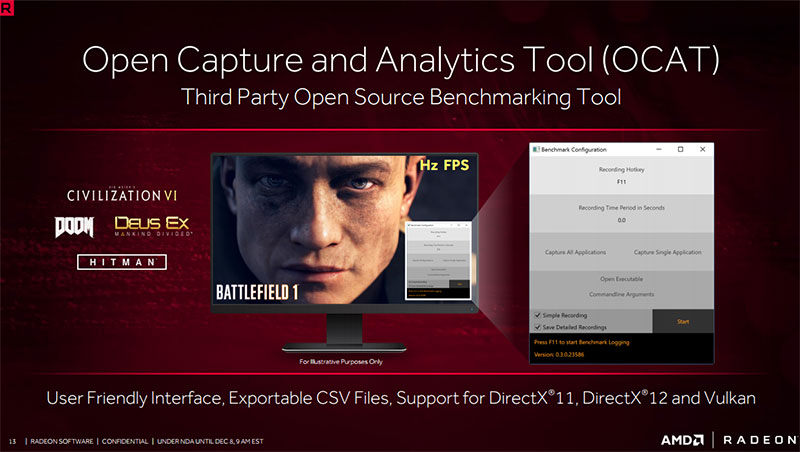