The configurations of the test setups we used for the different processors are listed below. However, the CPU cooler used differed between systems due to compatibility issues across the different sockets.

We tested the Threadripper CPUs with their default out-of-the-box settings and Distributed, or Uniform Memory Access (UMA) configuration. These are the same settings you'll find in Creator Mode, and we opted to leave out Game Mode because only older games really benefit from it. Furthermore, the newer games we tested seemed to suffer performance penalties when run in Game Mode.

The Intel Core i9-7900X took the lead overall here, likely helped along by a combination of strong multi-threaded performance and high Turbo Boost Max 3.0 speeds of 4.5GHz. In comparison, the Ryzen Threadripper 1920X and 1950X have a maximum XFR clock of 4.2GHz.

The results here also give you an idea of exactly what the AMD and Intel HEDT chips are good for. They lagged behind in the Office Productivity benchmark, where the higher clocked quad-core processors had an advantage.

However, the Ryzen Threadripper 1950X and 1920X did particularly well in the Data/Financial Analysis segment, which is more sensitive to higher CPU core counts. That said, Intel looked to have the advantage in the Media Creation benchmark, so it’s possible that the applications used in SYSmark – Adobe Photoshop CS6 Extended, Premiere Pro CS6, and Trimble SketchUp – don’t properly take advantage of Threadripper. 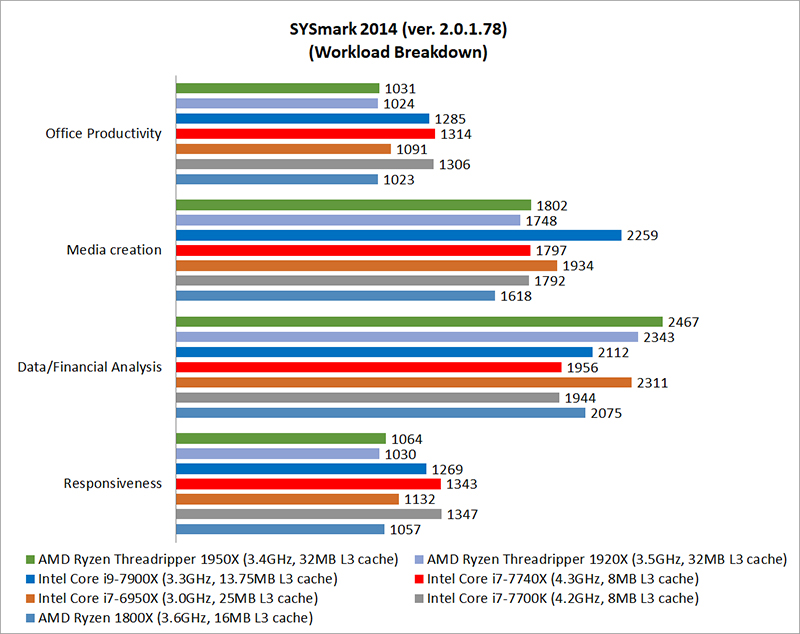 PCMark 10 Extended assesses the performance of systems in a variety of workloads, including basic computing tasks, productivity applications, digital content creation, and gaming. Compared to PCMark 8, it also adds in new test metrics, such as app startup times, which quantifies how long it takes to launch a variety of real-world apps, and a rendering and visualization workload to simulate professional graphics and engineering applications. In addition, existing workloads have been updated to reflect modern usage

We’ve also added in a graph to reflect the low-level breakdown of scores to give an idea of performance in individual workloads.

The Intel Core i9-7900X took the pole position overall, where it was around 9 per cent quicker than the Threadripper 1950X. However, they once again showed weakness in basic computing tasks compared to the mainstream quad-core CPUs, such as when working with productivity applications.

Their strengths lie in things like photo editing and rendering and visualization, although the Core i9-7900X took quite a large lead in the latter scenario. The Ryzen Threadripper barely came ahead in the 3ds-max viewset, but it seems like the maya-04 and sw-03 viewsets favor higher clock speeds offered by the Intel Core X chips as Threadripper fell behind together with the other lower clocked processors. The multi-threaded benchmark is where Threadripper really excels. The 1950X handily beats the Core i9-7900X by a good 38 per cent. But to give that more perspective, the latter is in turn more than twice as fast as the quad-core Core i7-7740X Kaby Lake-X chip.

On the single-threaded benchmark relies on things like clock speeds and IPC, which is why it’s Intel’s turn to shine. The high Turbo Boost Max 3.0 speed of the Core i9-7900X enables it to go toe-to-toe with the more aggressively clocked quad-core parts. The 16 cores and 32 threads on the Threadripper 1950X helped it edge ahead here while transcoding a 1.5GB .mkv file. That said, there’s just a hair of a difference between the 1950X and the Core i9-7900X, probably due to the fact that Handbrake evinces diminishing returns beyond six cores.

However, it’s important to bear in mind that Threadripper’s encoding speed doesn’t necessarily mean higher overall frame rates. Instead, you should simply expect less of a performance penalty while streaming, rendering, or compiling code in the background. To test temperature and power consumption, we ran the 3DMark Fire Strike Extreme Stress test and the energy-01 viewset in SPECviewperf 12.1 respectively, taking note of the peak values the chips achieved. For power consumption, this refers to the total system power draw from the power outlet.

It’s difficult to compare temperatures across all the chips given that we used different coolers, so these figures are better taken as a rough indicator to the temperatures you can expect in a typical gaming scenario (which probably doesn’t stress all the cores anyway).

There are few surprises when it comes to power consumption, and the 12- and 16-core Threadripper processors naturally consume more power. That said, the increase in power draw is less than the proportional increase in core count for the 1950X, so that seems like a win for AMD. 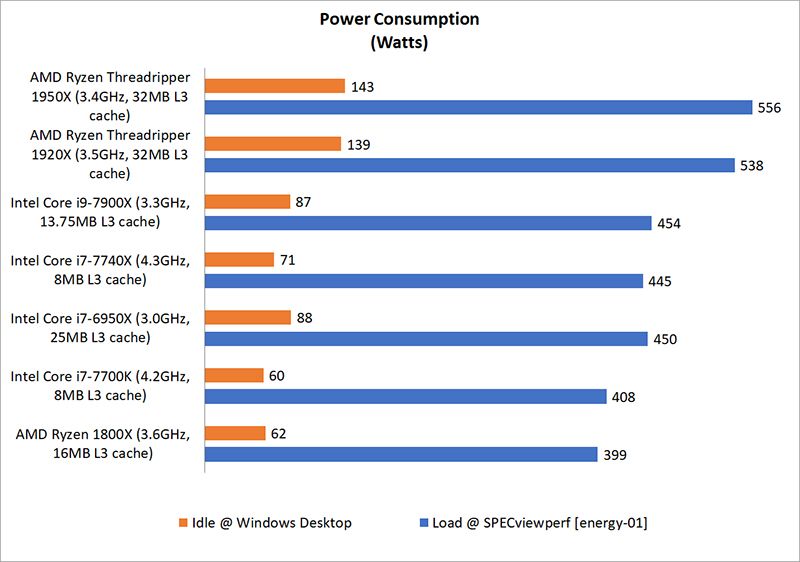