A look at the Physics and Time Spy CPU scores shows the Threadripper chips coming very close to the Intel Core i9-7900X as well, with the 1950X even outstripping the Core i9 in the Physics test.

The 12-core 1920X deserves praise as well, as it offers very competitive performance for just US$799. 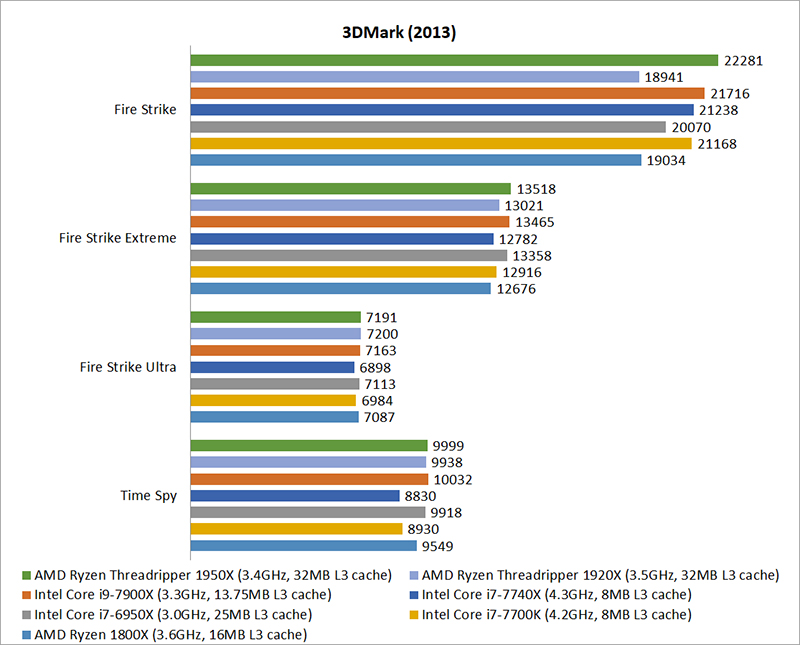 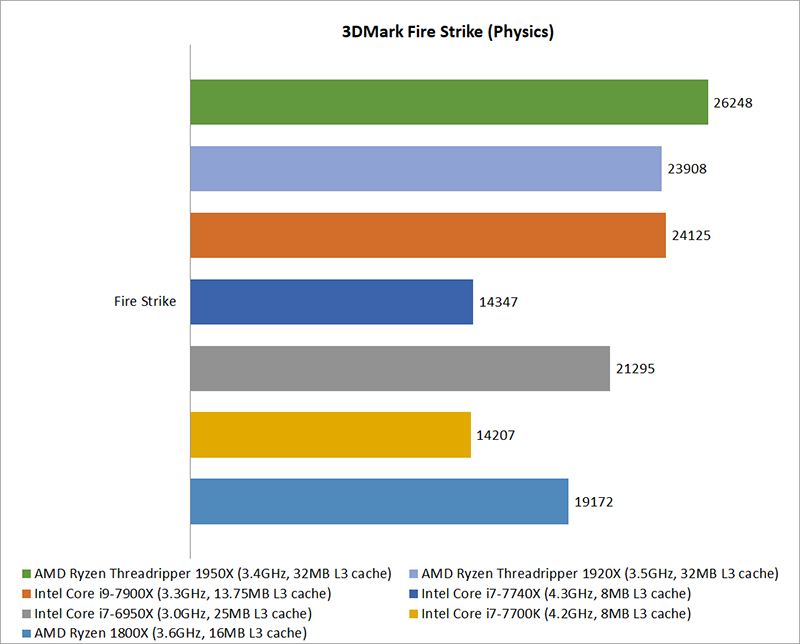 Ashes of the Singularity: Escalation was one of the first games to be updated with optimizations for Ryzen, and both Threadripper processors come very close to challenging the Intel Core i9-7900X in DirectX 12 mode at 1080p.

Ashes of the Singularity is one of the few CPU-bound games out there, if you’re playing on lower resolutions and settings that is. In DirectX 11 mode and High settings, the two Threadripper processors lag behind the Core i9-7900X by 14 to 20 per cent.

However, this gap narrows as you step up to Crazy settings and 1440p and 4K resolutions. The performance differential narrows even further in DirectX 12 mode, but that’s likely because the low-level API helps alleviate CPU bottlenecks by enabling it to process draw calls more efficiently, which means that the GPU is now the limiting factor.

In the CPU-focused benchmark, the Core i9-7900X still has an advantage, although the Threadripper 1950X isn’t that far behind. 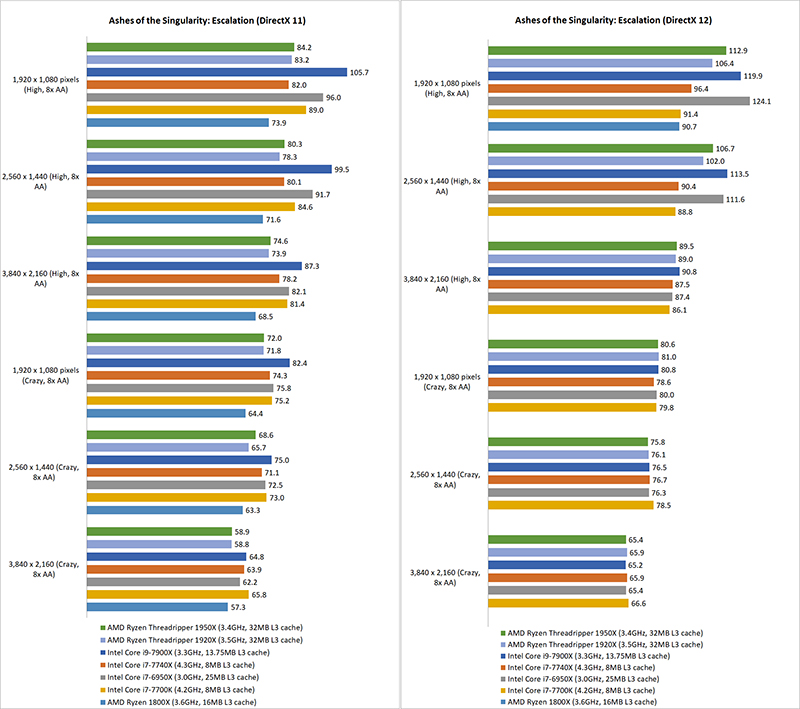 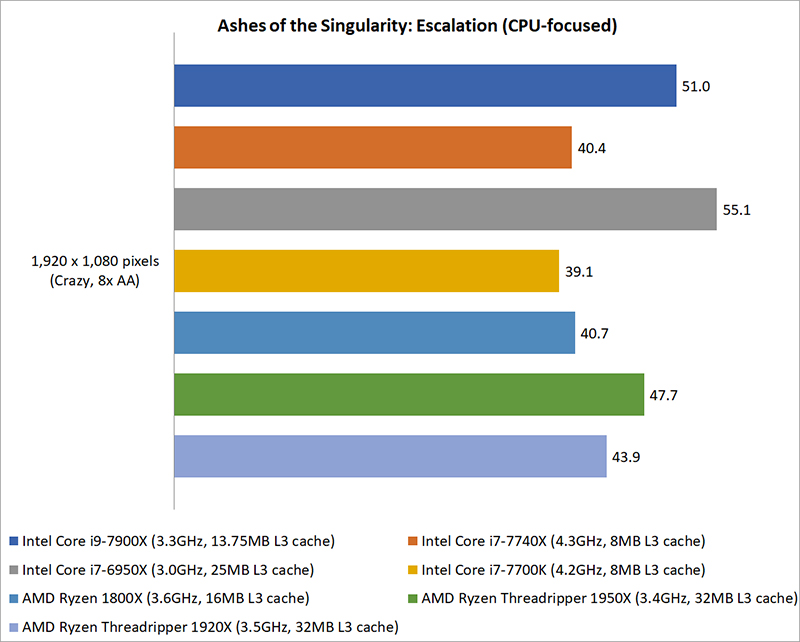 In Deus Ex: Mankind Divided, the limitations of the Threadripper chip become apparent in the less demanding graphical settings as well, where the CPU is the one holding things up.

Moving to DirectX 12 actually brings about a performance drop across the board, but it brings out the performance differentials between CPUs, especially at a 1080p resolution. The quad-core Core i7-7740X and Core i7-7700K did best here, and this is one example of the many games that don’t yet benefit from having a ton of cores and threads.

We used AMD’s RyzenMaster utility to overclock the Threadripper processors. This table below summarizes the clock speeds, the voltages we used to achieve them, and the respective performance gains.

Overclocking also disables the 4-core XFR boost, or Turbo Boost on Intel’s end, so the speeds won’t ramp up beyond that.

The Threadripper 1950X posted a very nice improvement of nearly 12 per cent, even though we were only able to achieve a clock speed of 4.025GHz, which is below the top XFR speed of 4.2GHz. However, XFR doesn’t apply across all cores ‒ AMD is quoting a 4-core boost to 4.2GHz ‒ so the overclocked chip has a greater proportion of the cores operating at a higher frequency than they would otherwise be.

We were able to hit a higher clock of 4.25GHz with the 1920X, and that produced a decent 10 per cent jump in performance.

The Core i9-7900X similarly managed a nearly 12 per cent increase, even though the speed topped out at a mere 4.5GHz. That’s where the upper range of the chip’s Turbo Boost Max 3.0 technology is as well, which explains why there’s barely any change in the single-threaded scores in Cinebench R15.

We didn’t have a custom liquid cooling loop to really push the chips, but the consensus among reviewers seems to be that 5.0GHz mark is nearly impossible for Skylake-X without some crazy cooling, which may be a bit of a disappointment for those looking to squeeze out more performance. 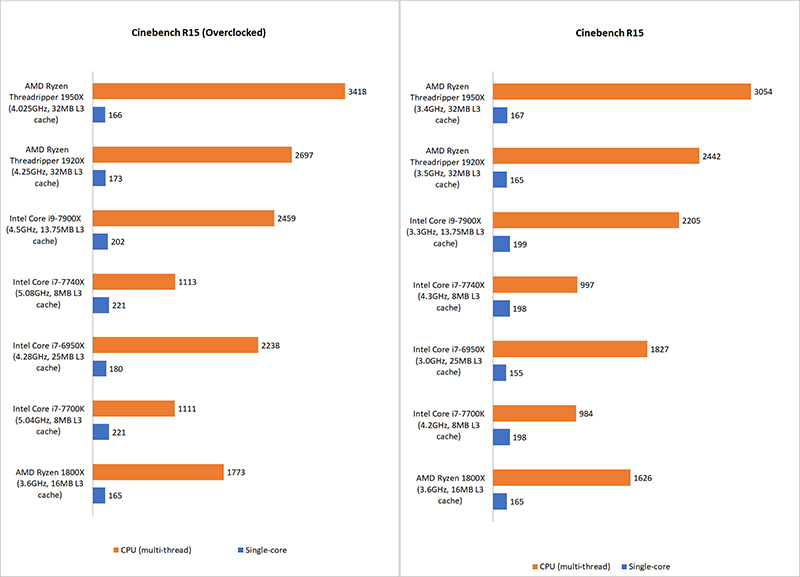