Precision Boost 2 is an opportunistic boost algorithm that drives loaded cores to the highest possible frequency until a limit, such as socket power, VRM thermal limit, VRM current limit, or maximum clock speed, is encountered. Once the limit is reached, the processor will cut back on boost and dither the frequency until the situation changes, a process that occurs every 1ms for greater responsiveness.

This feature is also designed to reward the use of more capable cooling solutions, since it utilizes available thermal headroom to drive higher average frequencies. If you want to make the most use of it, ditch the stock cooler.

AMD is also bringing Precision Boost Overdrive (PBO) to its mainstream chips, which you may remember from AMD's Threadripper processors. PBO expands power limits like package power tracking, thermal design current, and electrical design current to match that of the host motherboard. These expanded limits are communicated by the motherboard BIOS, and will vary according to board designs. The processor will then manage these new and higher limits by itself.

This means that the CPU will draw more power and hold higher average voltages over time. The extra power delivery allows more cores to achieve a higher effective frequency for a given workload over a longer duration of time. However, PBO does not raise the maximum frequency of the processor beyond the OEM specification unless the user chooses to do so, which is a new feature of PBO on Ryzen 3000. 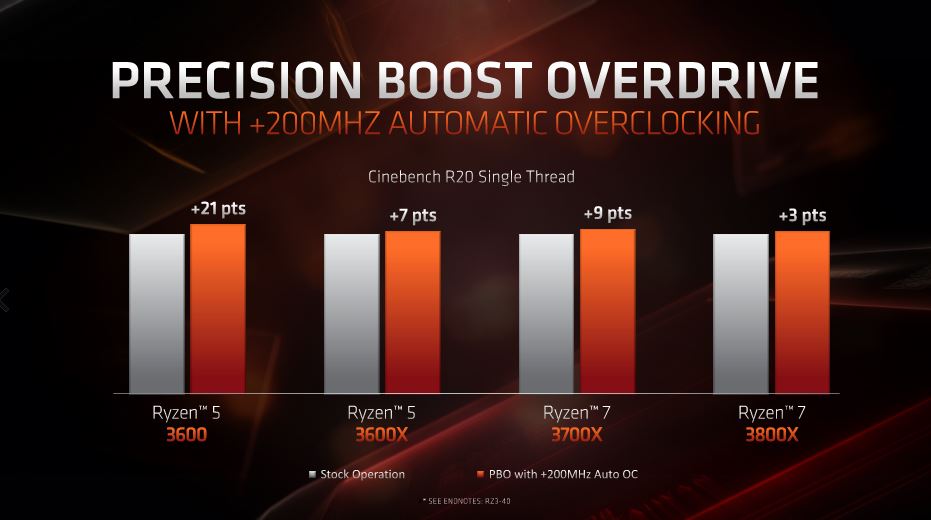 You can now opt to enable a maximum boost clock offset of up to an additional 200MHz. This is on top of the previously mentioned PBO features, and is a separate toggle from enabling PBO. However, AMD says that it is best used in conjunction with PBO for the best result. This new feature, called Auto OC by AMD, will tell the processor to manage a maximum boost clock that is up to 200MHz higher than default. This can be configured in 25MHz intervals through AMD Ryzen Master or the motherboard's BIOS.

That said, Auto OC is not intended to be a guarantee of a higher boost clock on any number of cores, and things like frequency and boost duration are still dependent on firmware-managed limits, even though they may be higher with PBO enabled. It is better thought of as a toggle that opens the door to possibly better single- and multi-threaded performance, all without the hassle of manual overclocking. There's also the benefit of down clocking when the processor is idle, something that's not possible with manual overclocking.

There's also one final caveat. PBO does drive the processor and platform beyond AMD's official specifications, just like manual overclocking, so you must consent to a voided warranty before proceeding.