The configurations of the test setups we used are listed below. We’ve also included an Intel Core i7-7700K and Intel Core i7-6950X for comparisons. Unfortunately, we did not have a Intel Core i7-7600K on hand to compare against the Ryzen 5 1600X.

Coming from our review of the Ryzen 7 1800X, we’ve included a new game benchmark in Ashes of the Singularity: Escalation as it was just updated with optimizations for Ryzen. Here’s a list of all the benchmarks used:

All the benchmarks were carried out in Windows High Performance mode and with the High Precision Event Timer (HPET) disabled in BIOS.

SYSmark is a business productivity benchmark suite that measures the response times of tasks on a PC using real-world applications in the areas of office productivity, media creation, and data and financial analysis. Task response times from simulated user input are used to generate a performance rating that reflects actual user experience, so the faster a PC responds to application workloads, the higher its score will be. The method of measuring response times can take many forms, such as the time it takes for an application to show a pop-up completion message, or how long it takes a progress dialog to disappear and for a user to regain application control. 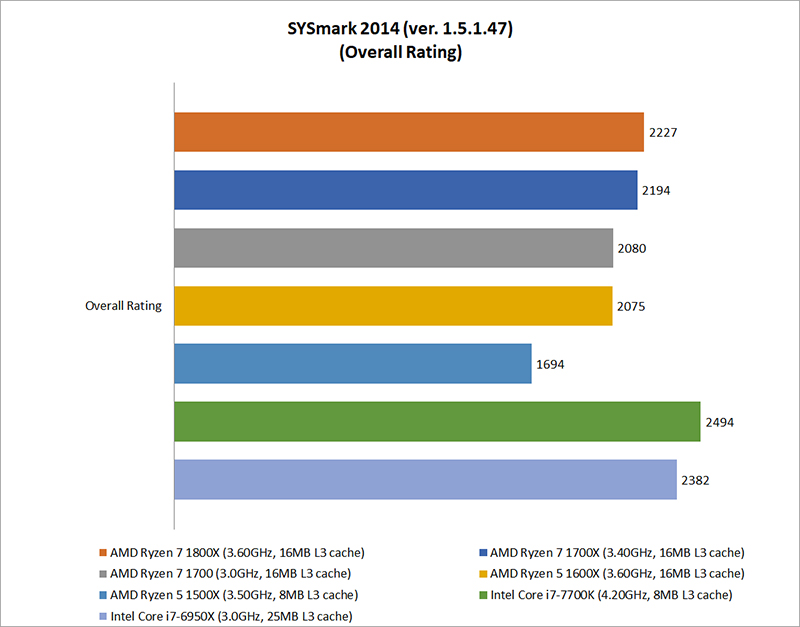 The applications in SYSmark benefit to a certain extent from multiple cores (the Ryzen 7 1800X and Ryzen 5 1600X are clocked the same, but the 8-core 1800X is overall quicker), but it looks like clock speed wins out in the end, with the Core i7-7700K high starting base clock helping it inch ahead. On the other hand, the 4-core/8-thread Ryzen 5 1500X had the weakest performance because of a combination of less aggressive speeds and lower core/thread count, coming in at 18 per cent slower than the 1600X.

A look at the score breakdowns also shows that the Ryzen 7 chips excel in data/financial analysis-type tasks, which involves crunching, compressing and decompressing data to make forecasts and projections. Here, they were only behind the 10-core Intel Core i7-6950X. 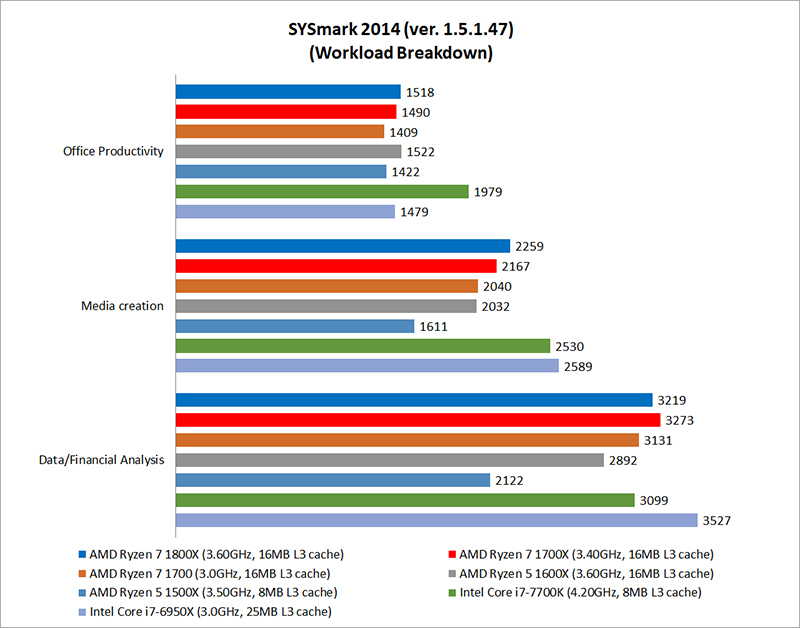 SPECviewperf is used to measure the 3D graphics performance of systems in professional applications. Each individual workload, called a viewset, represents graphics and content from an actual real-world application. SPECviewperf actually runs a total of eight different viewsets, but we’ve picked the four which have the greatest performance variation across CPUs displayed here.

All the Ryzen CPUs were quite closely matched here, and it’s clear that these workloads aren’t quite suited to taking advantage of high thread counts. For example, the 4-core/8-thread Ryzen 5 1500X was shown to edge out the 8-core/16-thread Ryzen 7 1700X and 1700, likely by virtue of a slightly higher base clock. 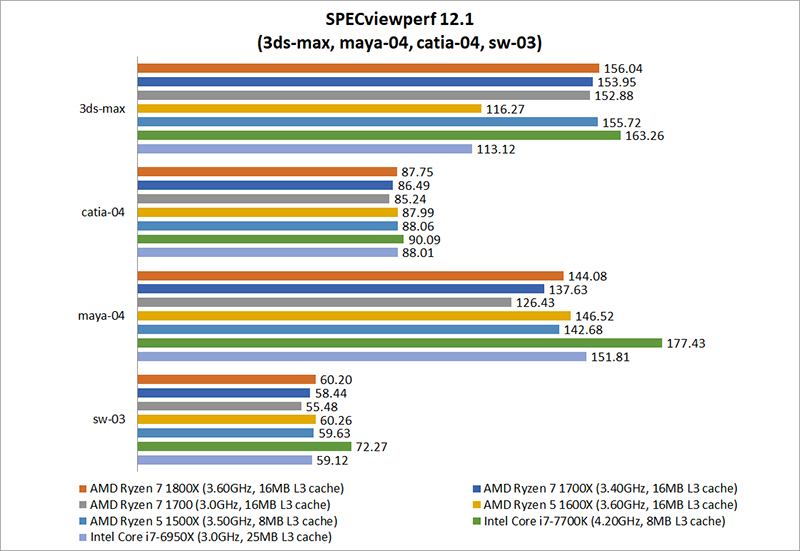 As we saw in our Ryzen 7 review, the multi-threaded benchmark is where Ryzen really steps up. The 6-core/12-thread Ryzen 7 1600X beat the Intel Core i7-7700K by a good 28 per cent, and the latter is the flagship of Intel’s mainstream CPUs line-up. That said, the extra two cores and four threads on the 1800X meant that it was still 31 per cent quicker than the 1600X

Interestingly enough, the Ryzen 5 1600X had a narrow advantage over the Ryzen 7 1800X in the single-core benchmark. Both chips have the same clock and boost speeds, but the results suggest that the 1600X was operating at the upper end of its boosted frequencies more often. 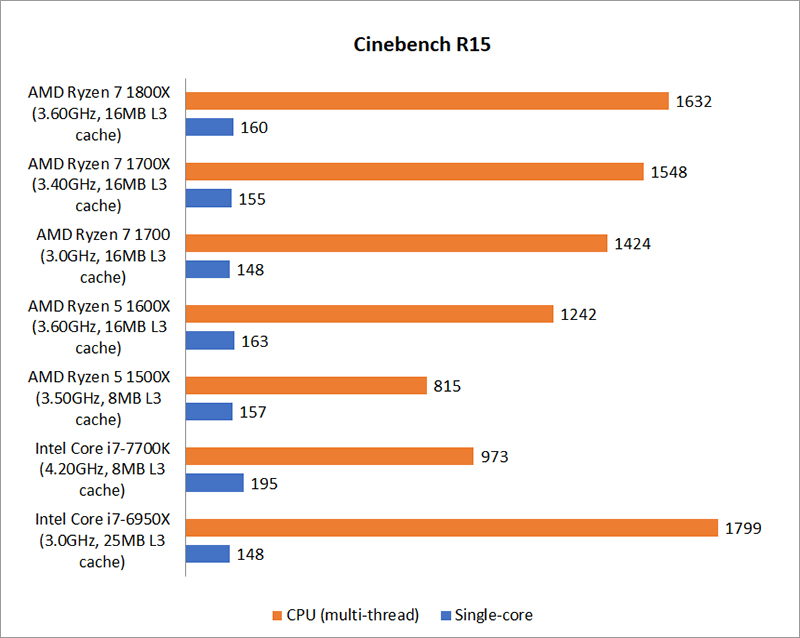 The Ryzen 5 1600X did well here and performed closer to the Ryzen 7 chips with relatively quick encoding times. However, the Ryzen 5 1500X was quite a bit slower here, which is probably why AMD isn’t recommending this particular CPU for streamers as it is with the 1600X.

Streaming is very CPU-intensive, and having more cores and threads help gamers take less of a performance hit while broadcasting. 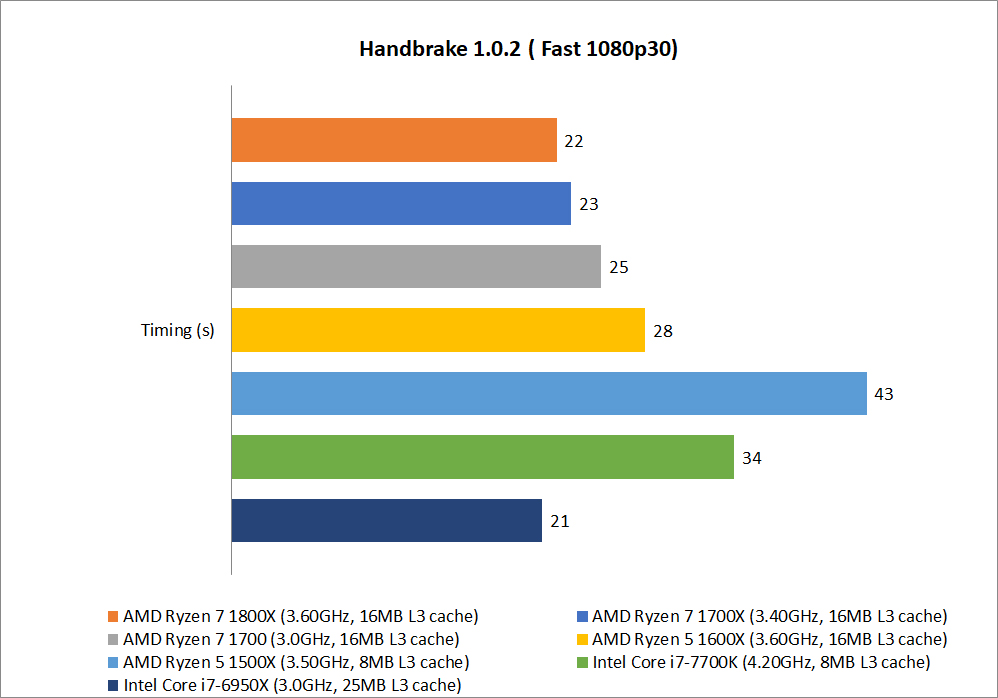 To test power, we ran the energy-01 viewset in SPECviewperf 12.1 and recorded the peak power consumption.

The most notable difference here would be from the lower 65 watt TDP of the Ryzen 5 chips, which translated into a peak power consumption that was around 30 watts lower than the 95 watt Ryzen 7 parts. 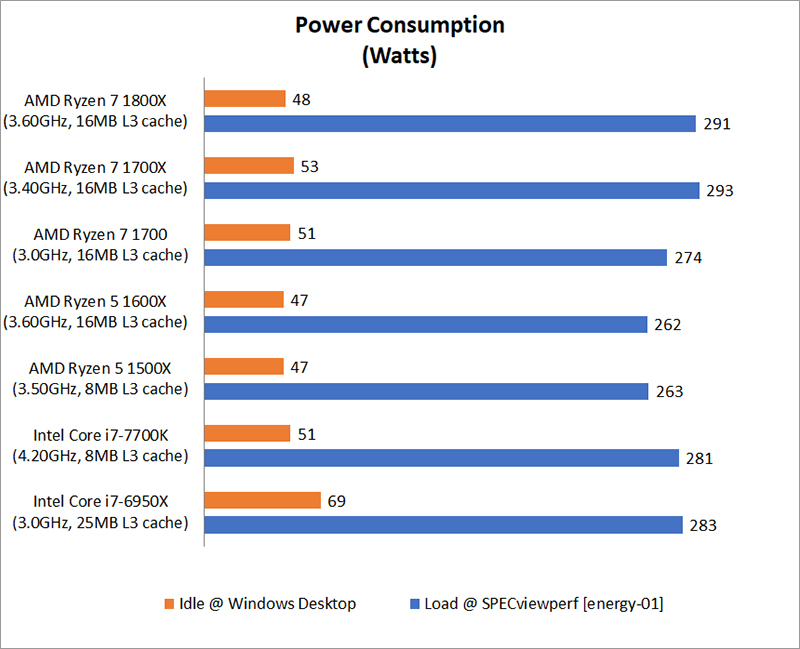