The synthetic 3DMark benchmark tests graphics and computational performance at different resolutions, starting at 1080p and going all the way up to 4K.

To further help tease out differences in CPU performance, we’ve included a separate table with the Physics scores in Fire Strike for the Ryzen CPUs. The physics test favors having more cores, and a good example of that would be the comparison between the Ryzen 7 1800X and Ryzen 5 1600X.

While the 1600X has the higher overall score, the 1800X was around 15 per cent faster on the physics test, showing that the former’s lead was from variations on the GPU front.

Another thing you’ll notice going forward is that the more GPU-intensive (which means the CPU is no longer the limiting factor) the benchmark gets, for example because of higher resolutions or settings, the smaller the differences between AMD and Intel gets. Having said that, there were hardly any significant differences in the Fire Strike Ultra test.

Similarly, because the Time Spy DirectX 12 benchmark is also more CPU intensive, all three Ryzen 7 chips managed to beat the Core i7-7700K here. A low-level API like DirectX 12 works best with weaker single-core performance and it improves multi-threaded scaling, which is probably why the Ryzen 7 chips did better here. 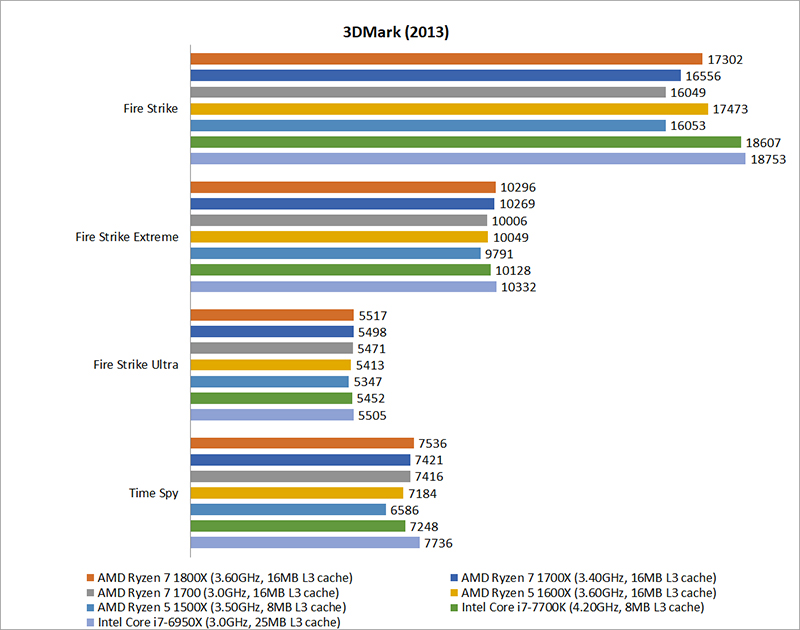 The Ryzen 7 1800X failed to impress at 1080p gaming, and the same goes for the other Ryzen processors. In fact, all the Ryzen chips ended up within a few frames of each other in Ashes of the Singularity. The two Intel CPUs were having the time of the day here, waltzing to large leads over their Ryzen counterparts.

Furthermore, the minuscule differences between performance at 1080p and 4K in DirectX 11 show that the Ryzen CPUs are the limiting factor here. In comparison, the Intel CPUs exhibited far more marked performance variations when scaling between resolutions.

Things improve slightly in DirectX 12, although it’s apparent that the Ryzen CPUs are still holding things back. When switching over to Crazy settings, which places a greater part of the performance burden on the GPU rather than the CPU, you start to see more dramatic differences between the different resolutions. 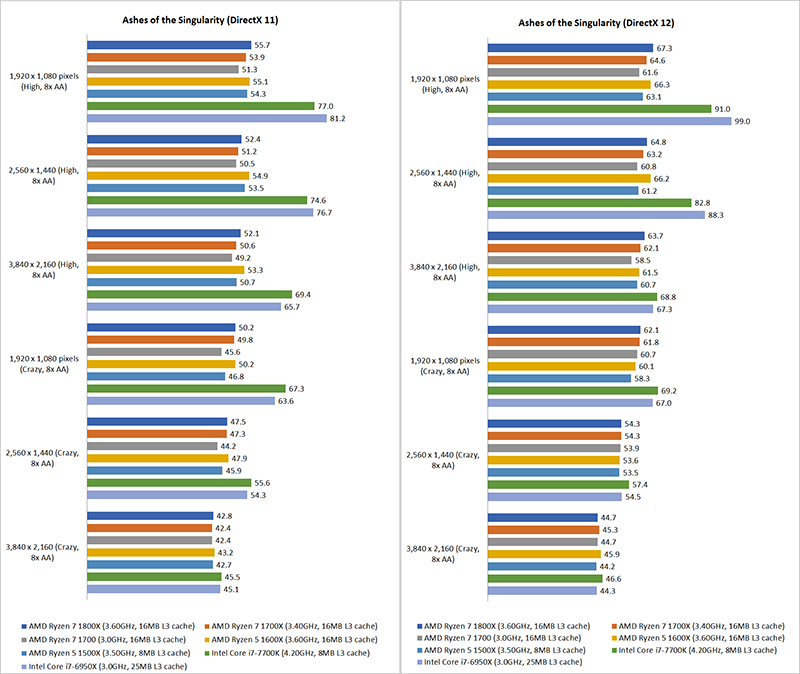 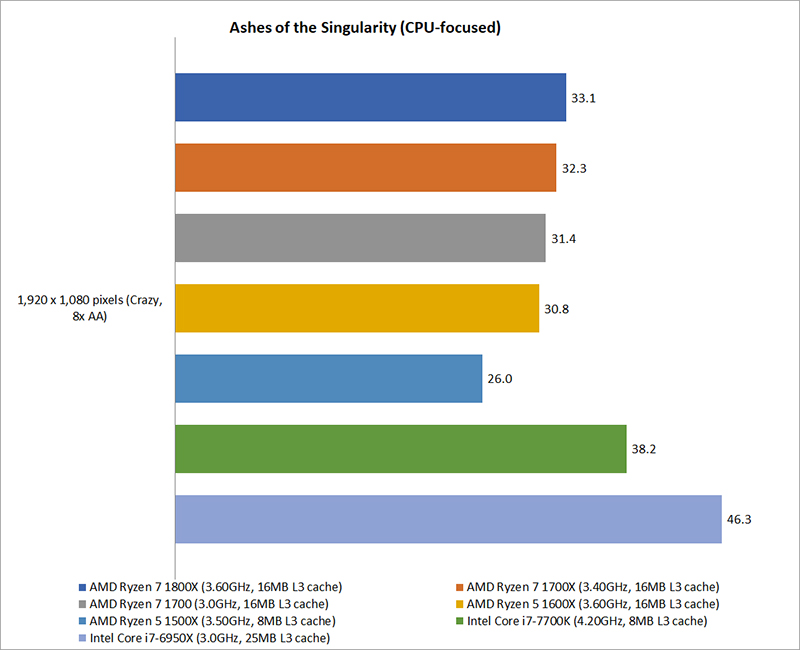 Here’s where things start to get interesting though. While Ashes of the Singularity was a study in frustration because of the failure of Ryzen to scale properly, the Escalation expansion professes to make things better with a patch that has been optimized for Ryzen. Starting from version 26118, you should see fairly significant improvements because the game is now better able to utilize Ryzen’s unique hardware.

AMD’s Zen architecture has some fundamental differences from Intel’s x86 implementation, and developers will need time to properly adapt their games to it.

After the patch, the Ryzen 7 1800X boasted a 22 per cent improvement at 1080p (High, 8x AA, DX12), while the Ryzen 5 1600X had a more modest 14 per cent increment. Given that Ryzen’s particular strengths include a high number of threads, the patch may be skewed to take advantage of that, which is why the Ryzen 5 chips had less significant frame rate increases.

Finally, it also looks like the patch managed to mitigate some of the CPU bottleneck for Ryzen, and there are now larger differences when switching between resolutions. 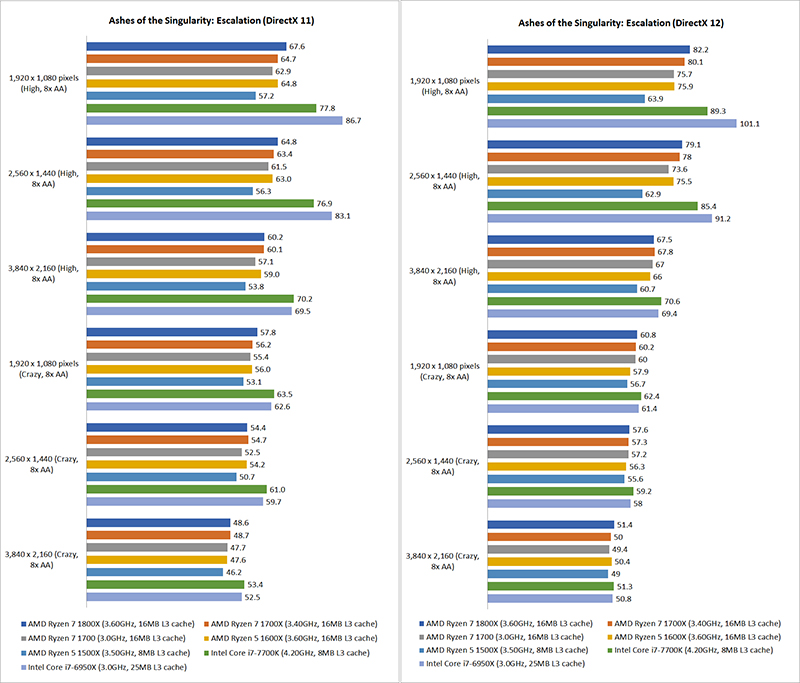 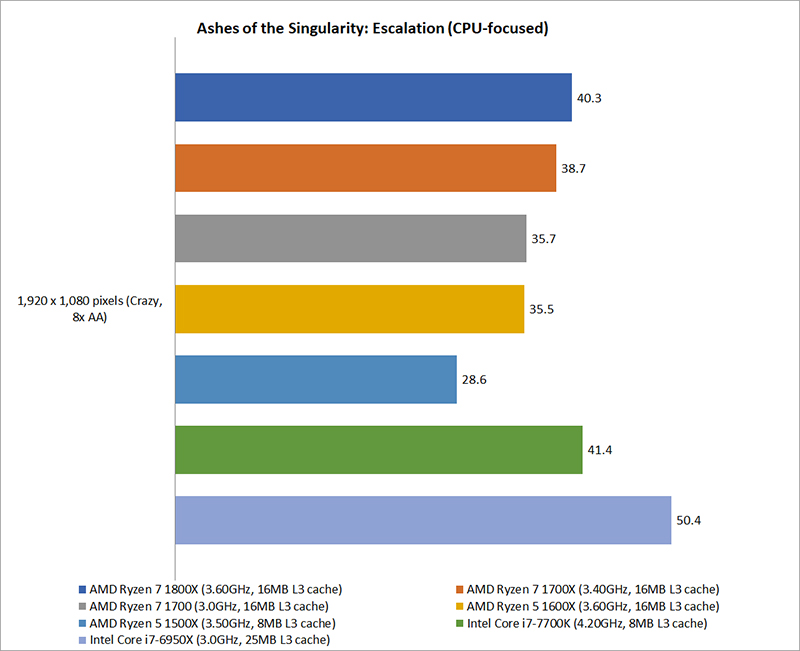 Deus Ex: Mankind Divided is one of the most demanding games out there right now, so while Ashes of the Singularity taxed the CPU quite a bit, Mankind Divided often puts the system in a position where the GPU is the limiting factor.

The result is remarkably similar performance across the board at 1440p and 2160p resolutions, and basically all of the tested resolutions at Crazy settings.

At 1080p and High presets (DirectX 11) however, the Ryzen processors compared quite favorably against their Intel counterparts. Unfortunately, that changed when moving over to DirectX 12, as the Intel CPUs exhibited improved performance while AMD’s chips swung the other way.

That could be a result of a lack of optimization on the part of the developer, and it remains to be seen whether new patches will roll out for this game (and others) that will address similar issues.

We used AMD’s RyzenMaster utility to overclock the Ryzen chips. The software recently received an update that doesn’t require you to manually enable HPET for it to work properly, which made things a bit more convenient.

This table below summarizes the clock speeds, the voltages we used to achieve them, and the respective performance gains. AMD generally recommends 1.4V as a safe voltage (going higher could affect longevity) that should be sufficient for most overclocks, but for the sake of testing we decided to try to push the chips over that.

Overclocking also disables the two-core XFR boost, so clock speeds will not ramp up beyond the current clock speed.

As it turns out, the Ryzen 7 1700 turned in the most impressive performance improvement at 22 per cent. It’s not difficult to see why – it starts off with relatively low stock speeds, but it is still an 8-core/16-thread part, and overclocking it close to 4.0GHz brings it close to the Ryzen 7 1800X and 1700X. 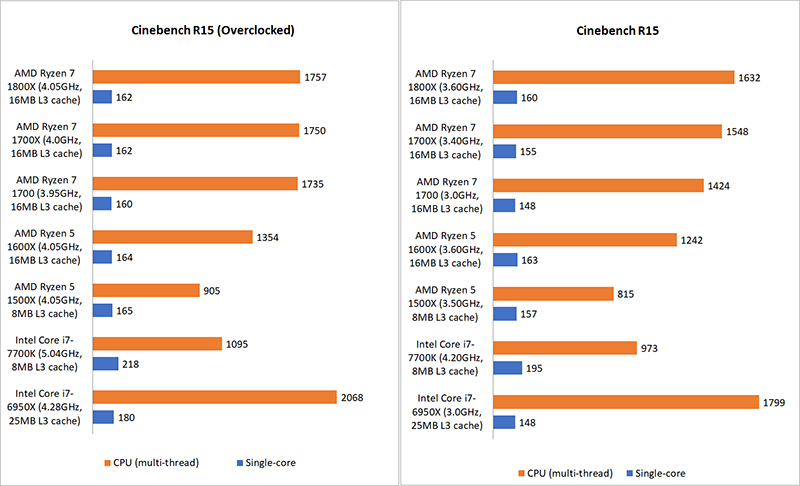