Note: This feature was first published on 15 November 2022. 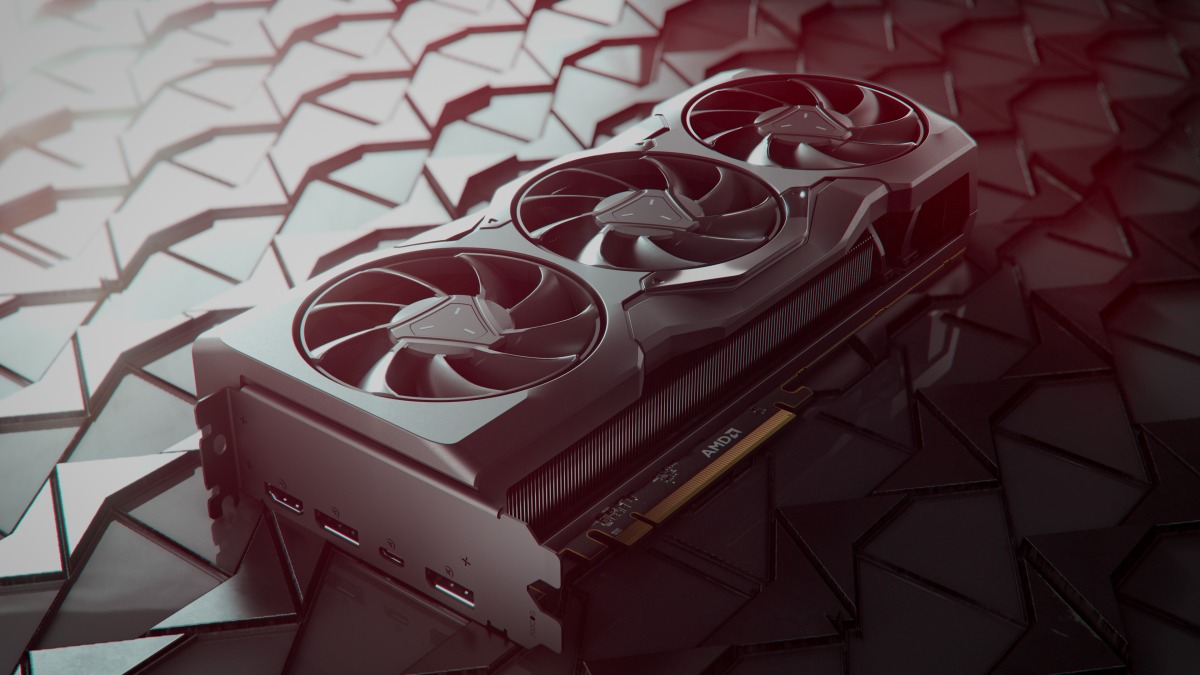 Note: This is a two-part story that continues further in a dedicated RDNA 3 GPU engineering article.

Let's get one thing straight. AMD's latest RDNA 3-powered graphics cards, the Radeon RX 7900 series is clearly not targeted to duel against NVIDIA's flagship, the GeForce RTX 4090. And rightly so, as the green camp's top enthusiast graphics card is priced north of US$1,599, while AMD has decided to battle where serious gamers are really going to spend their money - top-tier options just shy of US$1,000.

This is why the Radeon RX 7900 XTX is priced at US$999 and comes with an equally large 24GB frame buffer. Sure, it's not using higher-speed GDDR6X memory, but AMD has chosen to go with existing GDDR6 memory to conserve power utilised, improve the product's cost-effectiveness and still get the most out of it from a throughput perspective. That would mean gamers get to toggle higher resolutions if the rest of their rig is ready for it, and a boon for creators with access to that much frame buffer on a product that costs 37% less.

That's not all, the US$899 Radeon RX 7900 XT is also just as much enticing with more firepower (RDNA 3 vs. RDNA 2), a larger frame buffer (20GB vs. 16GB) and higher memory throughput than its predecessor (higher clocks and wider memory bus).

Did we mention that it's not going to sip any more board power than its predecessor? Well perhaps the RX 7900 XTX, but it's only by a small degree. Plus, the Radeon RX 7900 series is a more forward-looking card designed with the latest DisplayPort standard in mind to support really high-res and high-refresh output. Here's how the red camp thinks it's positioning against NVIDIA, but nothing is fixed until the green camp announces the RTX 4080 tonight:-

There's a lot else in store, but these high-level aspects should give you a better understanding of why the Radeon RX 7900 series seem so promising. The Radeon RX 7900 series will hit retail on 13th December 2022, and while there's still time for the competition to cough up options, let's focus on what AMD's new graphics powerhouse is capable of in this feature.

Since NVIDIA's suitably priced RTX 40 series competitor has yet to launch at the time of writing (the GeForce RTX 4080 16GB), AMD could only officially share performance figures across their own offerings. As can be expected, the Radeon RX 7900 series were tested on AMD's very own top platform offering with a Ryzen 9 7900X CPU AM5 processor and 32GB of RAM. Having both the CPU and GPU on AMD's ecosystem further amplifies the performance benefits since it can unleash AMD SmartShift Max for power shift optimization uplift between the CPU and GPU where the power and temperature envelope has room to spare and AMD Smart Access Memory (SAM) technology that allows the CPU to directly access the graphics card's full memory space to reduce latency and buffering. 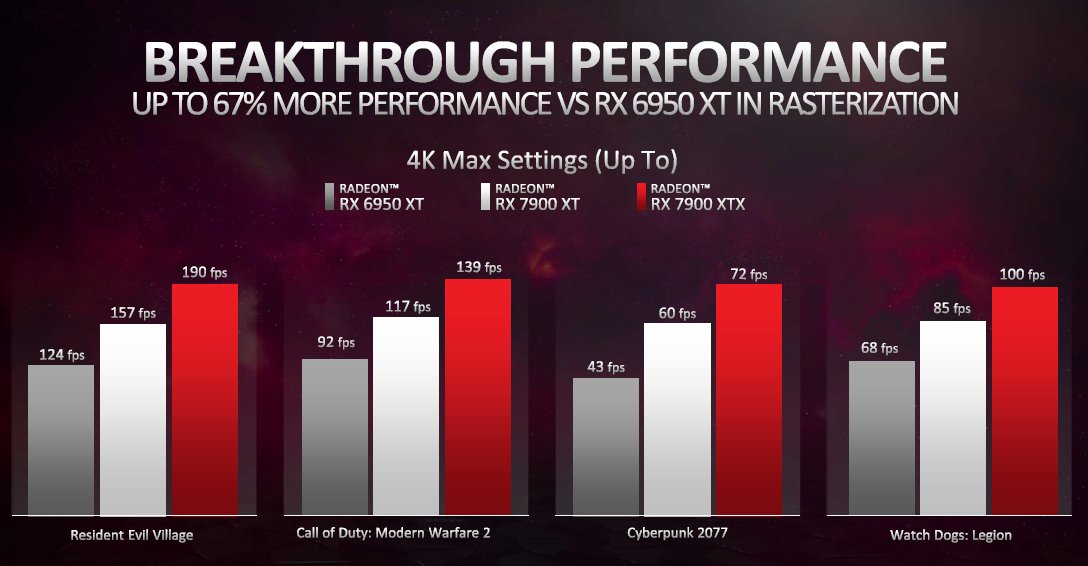 Now let's dissect what AMD has shared that we can analyse before receiving the review unit. Looking at the above performance figures at max settings in 4K resolution this is how we can break it down when comparing against the Radeon RX 6000 series flagship:-

AMD claims up to 67% performance uplift on titles using pure rasterization. While it could be true based on a wider set of game titles tested, it doesn't seem that way when we focus on these four leading game title varieties that AMD chose to showcase. Based on these titles, the Radeon RX 7900 XTX manages over 50% performance uplift over a Radeon RX 6950 XT and is more cost-effective than the Radeon RX 7900 XT when comparing the cost to churn per frame in the respective games.

Meanwhile, the Radeon RX 7900 XT seemed to fare between 25 to 30% better than its flagship predecessor but cost far less than it.

Let's study what happens when your turn on ray tracing and enable Fidelity FX Super Resolution (FSR), the NVIDIA DLSS equivalent for AMD:- 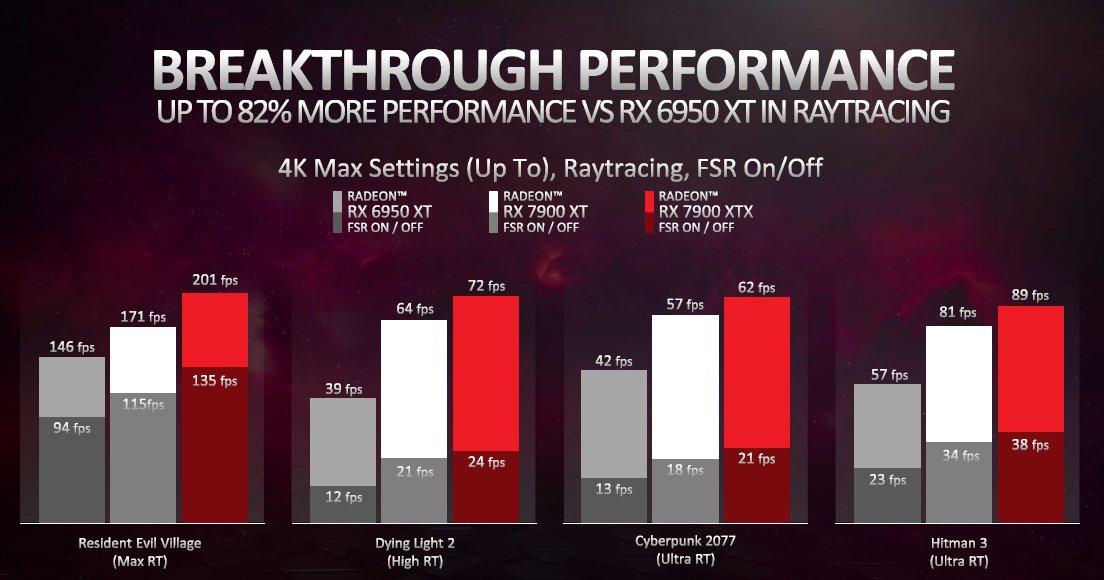 At 4K resolution, it's tough to get high performance with ray tracing and at maximum graphics settings. As such, we'll have to rely on AMD FSR to get some decent boost figures which help propel AMD's proposition that the Radeon RX 7900 series is now a great option for those who wish to game at 4K resolution. Meanwhile, let's dissect the FSR-enabled figures as shared by AMD:-

In this comparison, AMD claims the new Radeon RX 7900 XTX can perform up to 82% better at ray-traced games at 4K resolution with AMD FSR enabled and it does seem to be the case with Dying Light 2 with High RT settings. Taking an average across the four featured games, you get a little over 50% better ray-traced performance with the Radeon RX 7900 XTX and nearly 40% better with the XT variant when compared with the Radeon RX 6950 XT predecessor.

To be honest, AMD's launch event for Radeon RX 7900 series is the first time we're experiencing AMD FSR in action (since games didn't yet support it during the launch of the RX 6900 series), and it's looking great. Now, if only more games adopt FSR 2.0, which offers some terrific imaging quality, but this is definitely a work in progress.

What makes the Radeon RX 7900 series so much faster than its predecessor? 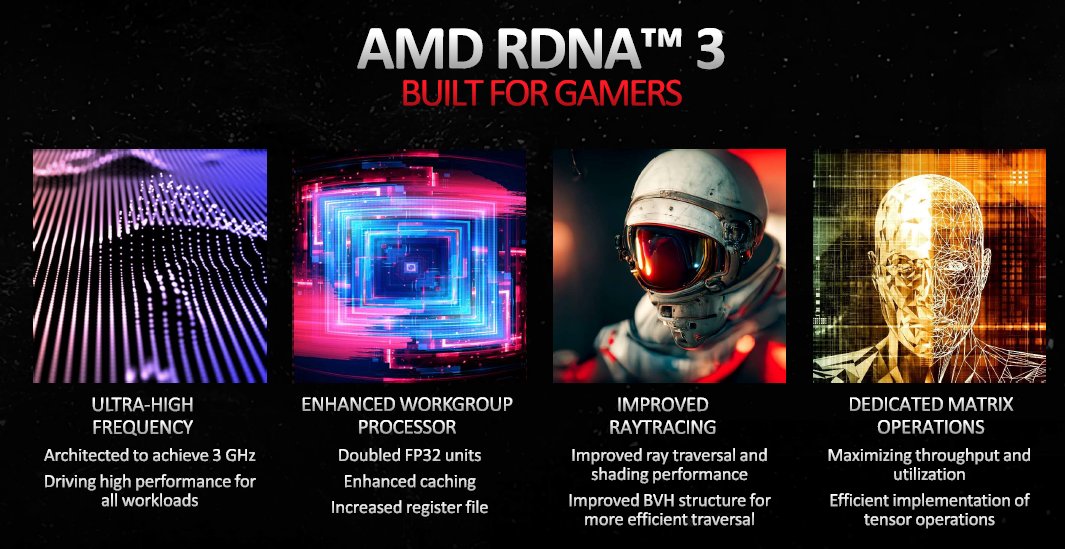 The Radeon RX 7900 series are the first graphics cards to feature AMD's RDNA 3 GPU architecture that has been engineered for higher frequencies (designed to achieve 3GHz) while consuming less power than RDNA 2. According to AMD's estimate, it has improved frequencies by 15%, but performance per watt has gone up by a staggering 54%.

That said, while the clocks for the Radeon RX 7900 series are higher than the RX 6900 series, the highest boost clock is still 2.5GHz on the RX 7900 XTX. So why does AMD say it's designed to achieve 3GHz? When we asked AMD engineers about this mismatch, they shared that the rest of the headroom is provided for overclocking and for extreme tinkerers to take the GPU to new performance heights. 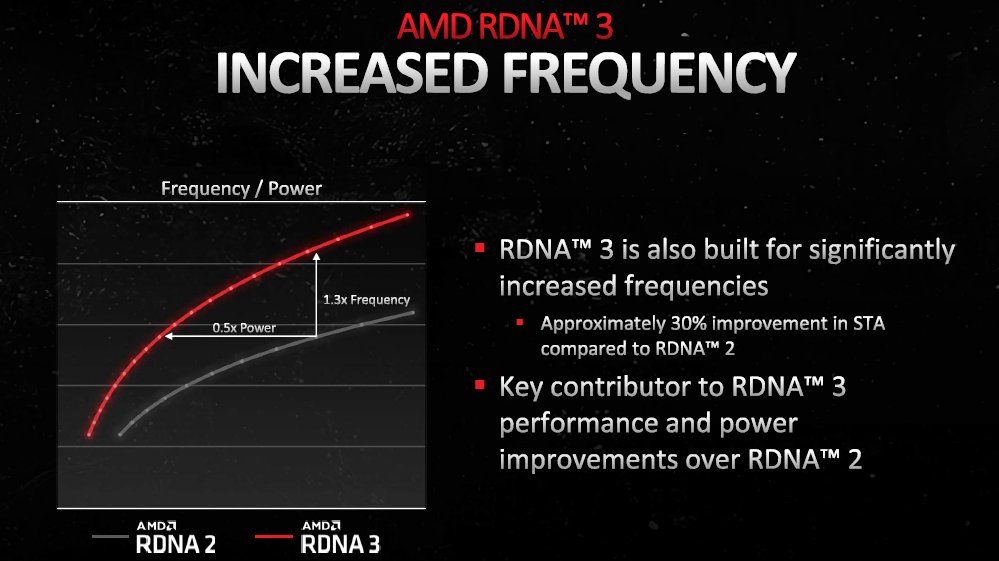 To go about achieving this, RDNA 3 enhanced the computation capabilities of the graphics core to double its peak operations output per cycle thanks to a new RDNA3 unified Compute Unit (CU). To recap, the Radeon RX 7900 XTX and RX 7900 XT have 96 and 84 of these new CUs, respectively. It might not sound like it's a lot more than the Radeon RX 6900 series, but as you'll see below, the updated CUs pack a lot of changes. 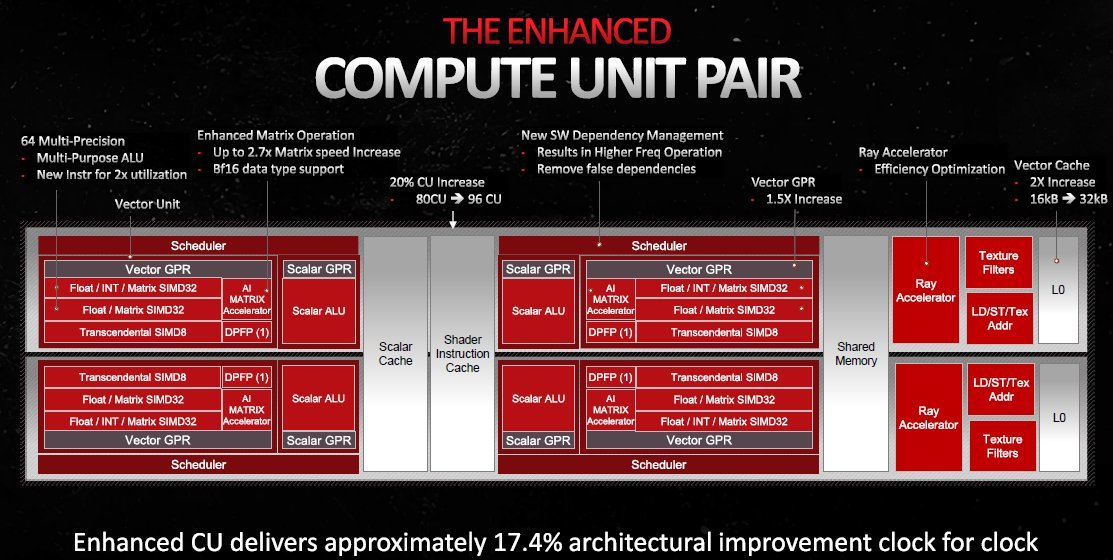 Each CU possesses 64 dual-issue, multi-purpose arithmetic logic units (ALU) SIMD streaming processors within that support not only dual-issue Wave 32 instructions but also a single-clock Wave 64 FMA (fused multiple accumulation) instruction for increased utilisation. The flexible utilization of these streaming processors for FP, integer and AI operations is what makes it a unified CU.

Coupled with improved pipelining throughout, each of these unified CUs now has two dedicated AI accelerators that are focused on enhancing matrix operations to boost machine learning, HPC and AI  tasks more effectively - up to 2.7x more to be exact. 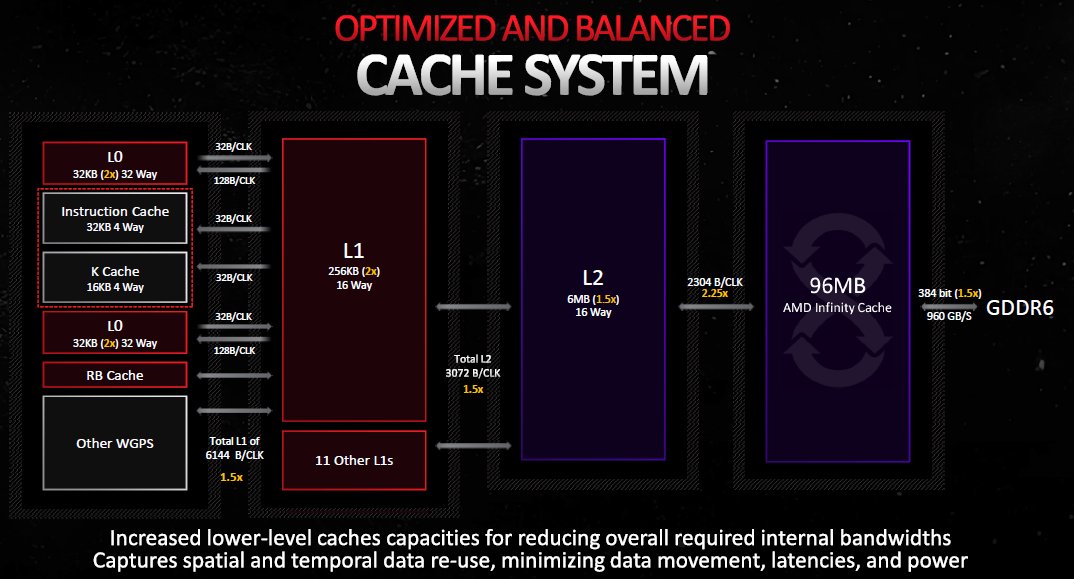 Efficiency of the entire graphics core has also been bolstered through upsizing of various caches (3MB L0 vector caches - 240% larger, 3MB L1 - 300% more, 6MB of L2 - 50% increase) and an updated AMD Infinity Cache to improve its bandwidth though the capacity has gone down from 128MB on RDNA 2 to 96MB on RX 7900 XTX and just 80MB on RX 7900 XT. AMD attributes this to a more balanced design that's suitable to the new RDNA 3 architecture. 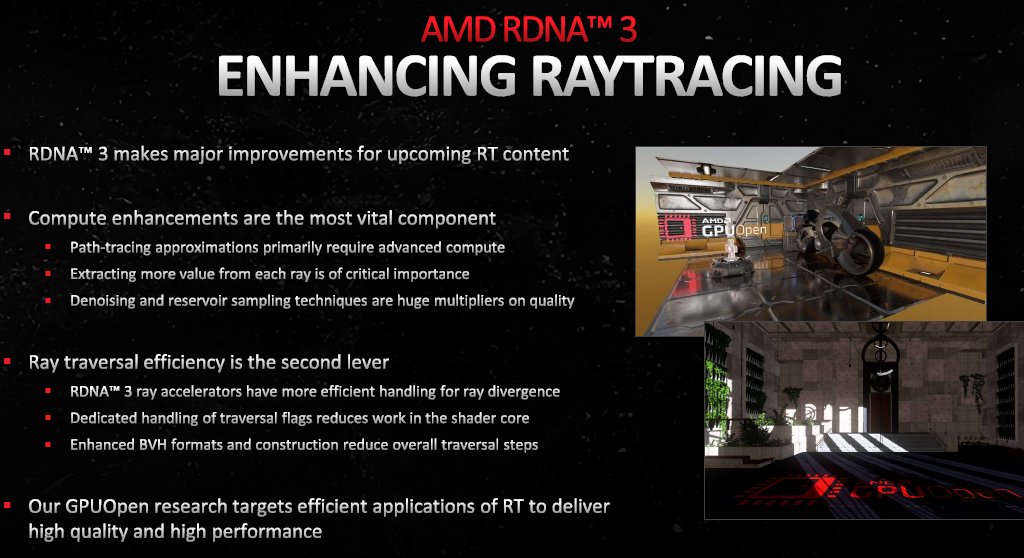 Improving ray tracing performance was an important agenda for RDNA 3 (which would be AMD's second generation of ray tracing as RDNA 2 was first to introduce RT) and AMD has stuck to using accelerators embedded in each of its CUs just like in RDNA 2.

If you notice the specs table earlier, Radeon RX 7900 series easily boasts many more CU units than its predecessors, and this directly allows the new GPUs to harbour 20% more ray tracing units. Secondly, the AMD engineers have been very judicious on how to use the rays by executing them efficiently and studying the process and outcome to dump unnecessary instruction to improve ray tracing logic, incorporate new box testing rules to exact more efficiency from each ray (there's no upside to wasting precious cycles through inefficient rendering) and added hardware managed DirectX ray-tracing (DXR) flags. The result of all these improvements is that AMD says it has achieved up to 1.8x performance uplift on heavy ray-traced workloads.

So all this sounds promising and RDNA 3 could be the real deal we've been expecting from AMD. When can we actually see any real-world performance from actual in-house testing? Stay tuned as that's likely going to be closer to the actual availability of the Radeon RX 7900 series that's slated for availability on13th Decemeber 2022.