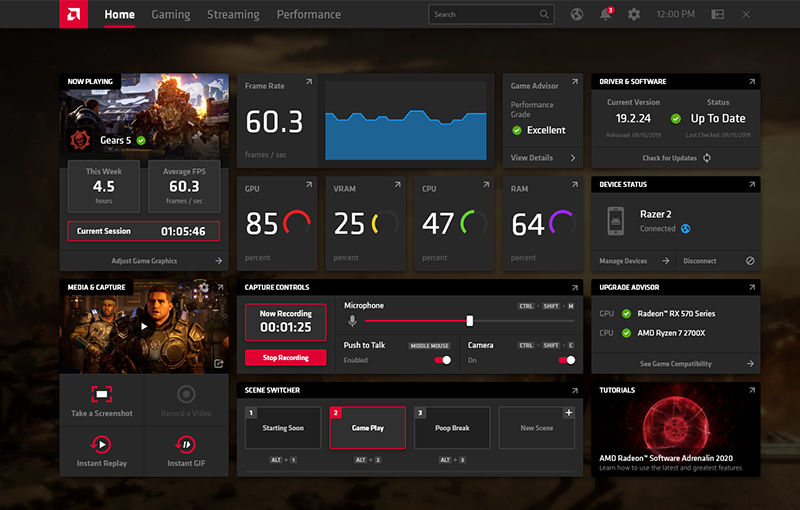 A new look for Radeon Software

AMD is back with another overhaul for Radeon Software. The latest update layers on a fresh coat of paint and a new look, and AMD is also doubling down on features that will make Radeon Software more intuitive and easier to use overall.

The new features will simplify many aspects of the user experience, ranging from the installation of Radeon Software to searching for a walkthrough mid-game and sharing your gameplay online. On top of that, AMD is introducing something called Radeon Boost, which can help improve performance in select scenarios.

Here's a look at the key features you need to know about.

The most interesting addition is probably Radeon Boost, a new feature that increases performance when "fast motion" is detected. This basically allows the resolution your game is rendered at to change dynamically, depending on your mouse input. If fast movements are detected, such as when you're rapidly checking corners in an FPS game, the game will drop its resolution to boost frame rates. AMD claims you should see a 23 per cent improvement in performance on average with Radeon Boost on, and with supposedly little to no noticeable change in image quality.

Radeon Boost works by monitoring user input and then responding to it, so scores in regular gaming benchmarks where there's no mouse movement will not see any change.

That said, Radeon Boost seems to me like the reverse of Radeon Chill, which is a power-saving feature that scales down GPU usage during less intensive scenes. It also monitors user input, and when quick motions aren't happening onscreen, it'll reduce frame rates to conserve power.

Radeon Boost is also solely a driver-side feature and doesn't require any extra work on the part of game developers. That's good news since it means there are lower barriers to growing the number of supported titles. At the moment, AMD lists eight games as working with Radeon Boost: 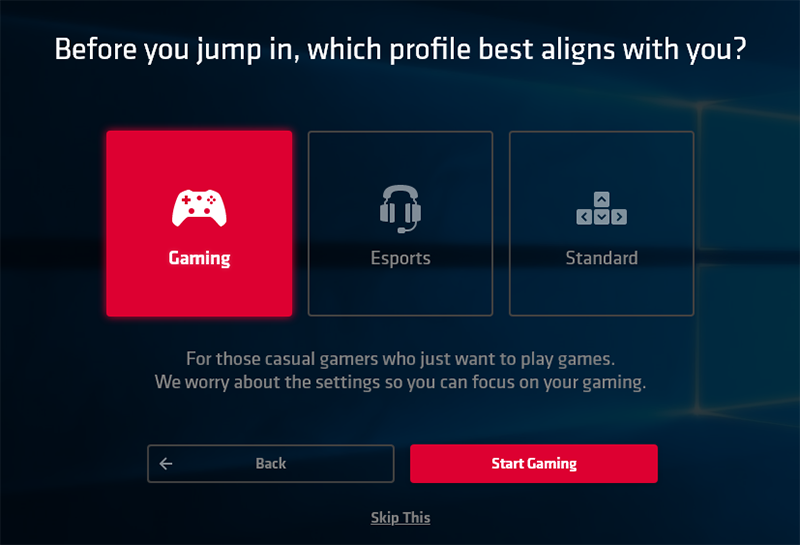 A big part of the new Radeon Software is also focused on making things easier for novice users and the less tech-savvy. For starters, AMD is introducing a new and completely rearchitected installer that offers one-click setup and up to 34 per cent faster installation, according to the company. You'll also have the option to pick between starting afresh with a "factory reset", or keeping your settings between installations.

In addition, AMD is adding pre-configured user profiles to the installer, letting you choose between Gaming, Esports, or Standard profiles. These one-click presets makes it easier for those who are less familiar with PC hardware to get off the ground, but enthusiasts can of course bypass these user profiles entirely and create their own configurations.

There's also now an integrated Chromium-based web browser, which will let you access tutorials and walkthroughs online without leaving your game. That sure seems like a convenient feature, and it might let you run games in exclusive fullscreen mode instead of something like borderless windowed if you don't need to Alt-Tab constantly to Chrome.

On top of that, AMD knows that streaming and sharing your gameplay is a really common thing to do right now. To that end, it's making it easier to capture, view, and share images or videos from a single location. An in-game overlay surfaces options like screenshot capture, video recording, instant replay, and even instant GIF, so you have access to most major media capture functions. Finally, you can also share your gameplay clips directly to social media from within Radeon Software. 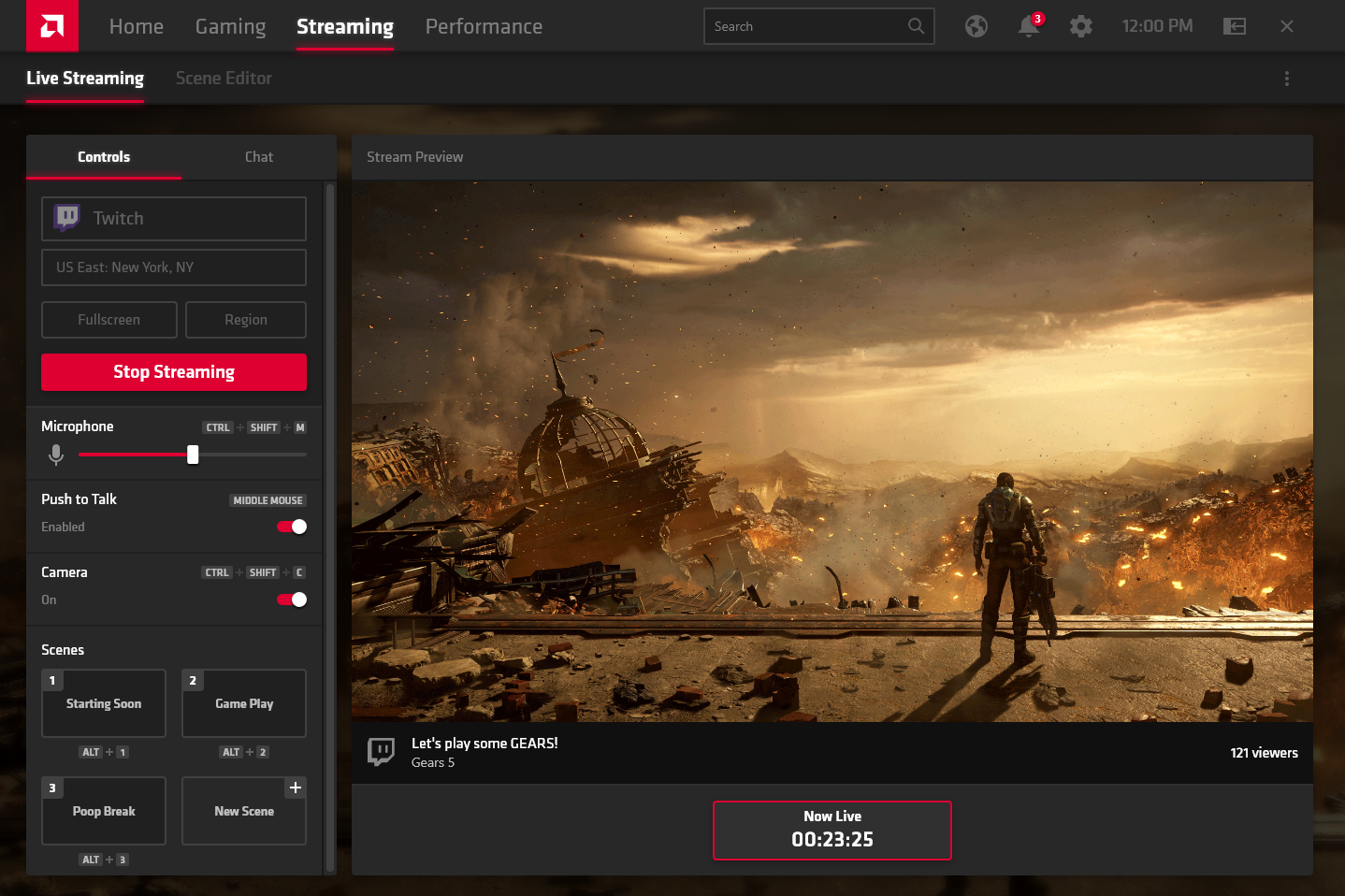 AMD is adding a dedicated streaming tab too, from which you can stream your game or desktop online. The recording software was developed in-house by AMD and is not based on OBS or similar software. AMD estimates that there's roughly a 3 per cent performance overhead while streaming, which is pretty forgiving.

AMD Link is getting more powerful as well and it will now let you stream your PC game on any mobile device that has an internet connection. Previously, your phone or tablet needed to be connected to the same local network as your PC. AMD Link supports high bit rate streams of up to 50Mbps too, in addition to x265 game streaming for more efficient encoding.

A new interface and Game Center 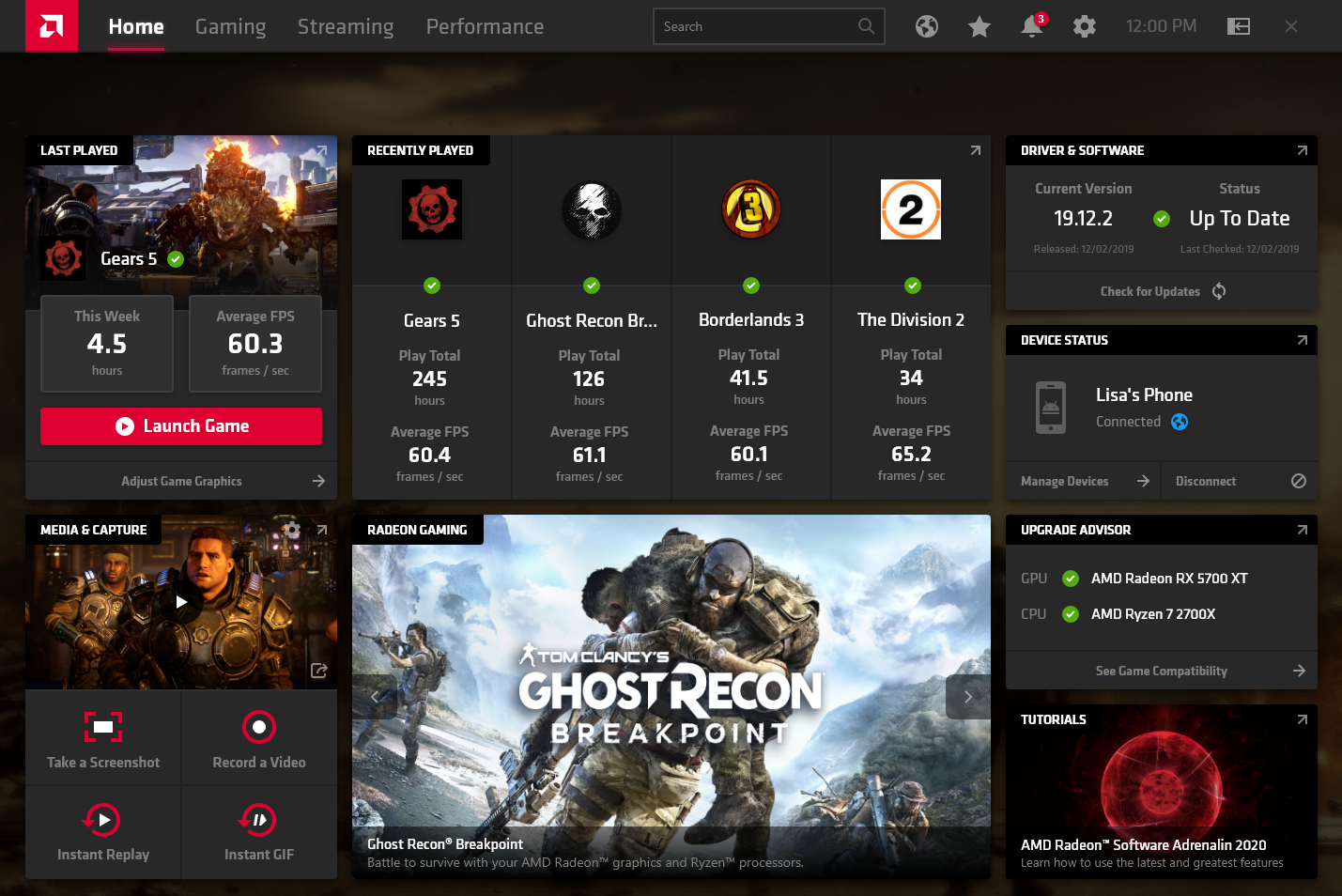 All that is coming together in a new look for Radeon Software, which now boasts a more modern interface and even a dark theme. The layout is a lot more visual, and there's even a dedicated Game Center where all of your games will live. With the Epic Games Launcher, Steam, Battle.net, and even Origins all hosting very popular titles, AMD wanted to have a single place where you could go to launch all your games.

The Game Center will also let you adjust the Radeon Software settings on a per-game basis, and you can easily track your gaming stats, such as the amount of time you've spent on a game and the average FPS you get for each title. A separate System Status section shows you if your drivers are up to date and notifies you if your hardware doesn't meet the minimum specifications for a game.

AMD built a Software Tuning tab too, where you can access advanced settings like memory clocks, voltage, and fan speeds. However, it also offers a simplified view and auto-tuning presets for beginners who don't feel comfortable fiddling with too many settings.

To cap things off, AMD is rolling out support for integer display scaling, which scales onscreen images from a single pixel to four or more. NVIDIA added a version of this in a huge driver update in August, so it's about high time AMD offered the same. It's essentially a new mode for the hardware display scaler, and it can give classic games a retro, pixel art look and help preserve detail in pixel art games at higher resolutions. It's apparently the top feature that users wanted to see, according to AMD.

Another important addition is the new image sharpening slider, something NVIDIA brought to its Control Panel in an October driver update. This gives you greater control over the degree of sharpness, and it can be toggled on and off while in game if you decide that the effect isn't quite what you want. This is part of AMD's Radeon Image Sharpening feature, which also now supports DirectX 11 games, something which was glaringly missing at launch.

Then there's the DirectML media filters, which utilise Microsoft's low-level machine learning API to apply AI-accelerated denoising and upscaling. These accelerate image quality enhancements and serve as a quick way to clean up your photos and videos. They were previously already a part of AMD's Radeon ProRender engine, so it looks like the company decided to extend it to consumers and gamers as well.

AMD hasn't forgotten about Radeon Anti-Lag either, and it's getting a small update too. Radeon Anti-Lag does exactly what its name says, reducing input lag to deliver a more responsive gaming experience. The latest Radeon Software throws in support for DirectX 9 games on graphics cards that came before the Radeon RX 5000 series. There's also now a global activation toggle, which will let you activate the feature across the board for all games.