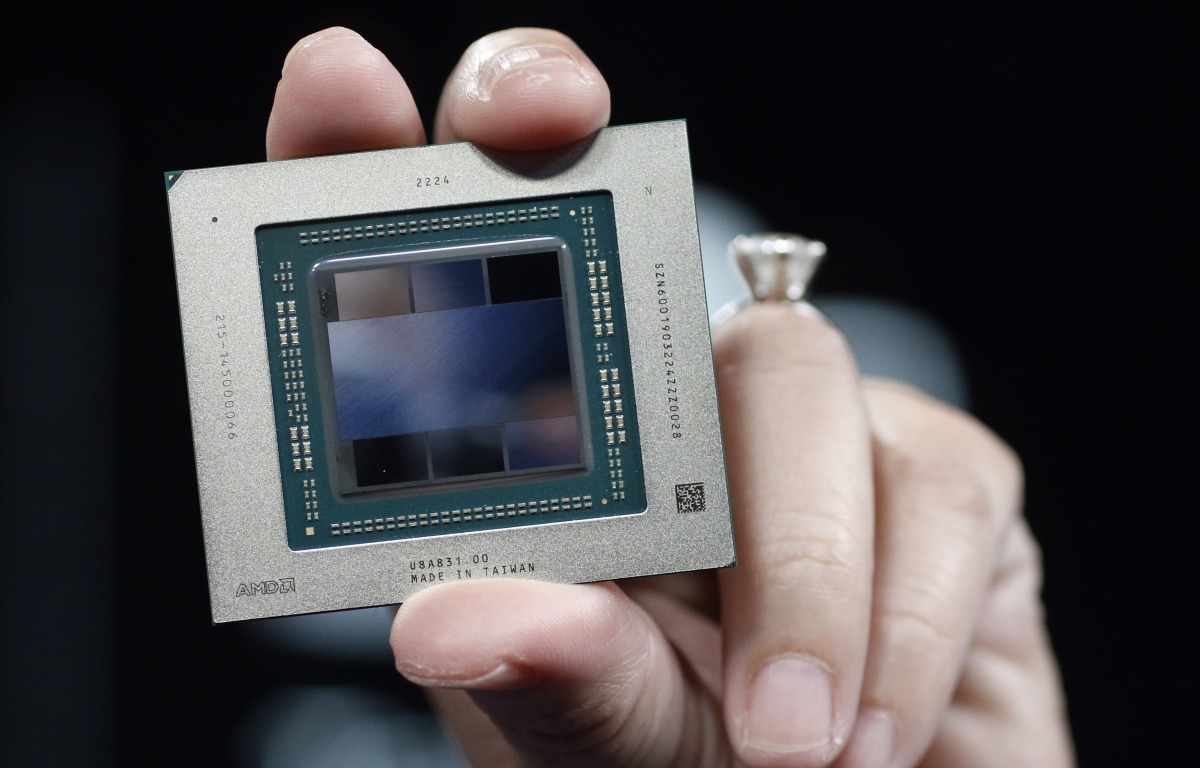 Note: This is a continuation of our earlier story on the Radeon RX 7900 series performance expectations and the RDNA 3 core GPU architecture.

In an era where advancing processor performance is getting increasingly complex, it's all in the hands of clever engineers to maximize and extract more out of given design parameters and available technology. For example, progressing through various wafer fabrication process technology nodes was a great way to get performance hops regularly just because you could pack more transistors in a given die size, which generally equates to more capabilities on the new chip. However, the rising cost of inflation over the years plus the complexity of engineering the subsequent nodes has only ramped up the yield cost for the silicon wafers.

In today's context, having excessive transistors in your silicon is likely only adding to the cost, and complexity of taming it to run efficiently without overheating and throttling. Plus, silicon process node advancements don't scale as uniformly in capability and performance as they once did at larger gate sizes as different silicon functions now exhibit varying gains as AMD has captured in the below diagram.

AMD is well aware of these limitations as it debuted one of the more modern chiplet-based chip designs when it engineered the Zen 2 microarchitecture for its second-gen AMD EPYC processors where it was noted that the DRAM and Infinity Fabric tend not to scale well with process shrinks, so separating the CPU chiplets from the I/O die allowed AMD to continue with an advanced process node for the core processor  chiplets that benefited from increased performance while using more mature process nodes for I/O interfaces. This enabled AMD to cram in more CPU cores at the same power and was more cost-effective to manufacture than traditional monolithic chip designs.

AMD's existing Navi 21 GPU (Radeon RX 6900 series) based on RDNA 2 GPU architecture is an extremely large and expensive monolithic chip at over 520mm2 and cramming 26.3 billion transistors on a 7nm TSMC process technology. It's brute force for sure, but it's not really efficient, and AMD needed to tackle this to put its best foot forward. As such, for AMD's RDNA 3 GPU microarchitecture, AMD looked towards their EPYC and Ryzen CPUs that continue to use the chiplet topology for inspiration. Could AMD tear its GPU into multiple dies?

The birth of the world's first chiplet gaming GPU | Breakthrough no.1 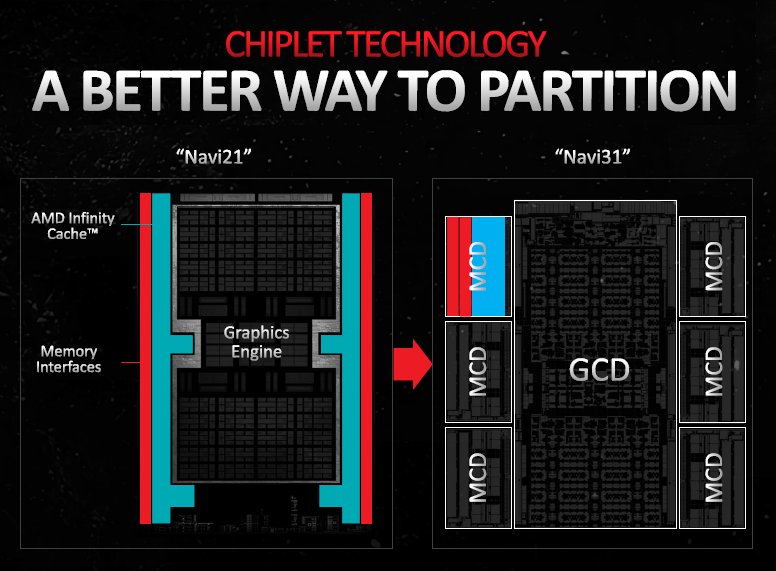 Keeping the wafer fabrication process scaling limitations in mind, AMD's top minds chose to split off components that scaled poorly, while moving ahead to shrink the graphics core (Graphics Compute Die or GCD) with TSMC's advanced N5 (5nm) process. Thus, the memory interfaces and controllers and improved Infinity Cache were reorganised to be packed into their own little chiplet - the MCD (Memory Cache Die). Each MCD has a 64-bit memory controller and is fabricated on a much more mature and cost-efficient 6nm process that's currently used on advanced memory chips. Multiple MCD dies are used to make up the GPU's specced memory bandwidth.

Thus, the RNDA 3 GPU architecture is the first-ever chiplet topology GPU and the Radeon RX 7900 XTX and Radeon 7900 XT are the first graphics cards to bear them. In fact, the move to the chiplet style architecture is such a big move that AMD specifically decided to mark the occasion to bring back the "XTX" SKU for its top graphics card.

However, coming up with the right way to dissect the classic monolithic GPU is only part of the equation. How can all these chiplets communicate effectively between them?

On AMD's CPU, the Infinity Fabric's high-speed organic package was the enabler that interconnects the chipsets sufficiently fast enough to meet CPU bandwidth requirements with hundreds of signals being processed across the I/O and Core Complex Dies (CCDs). 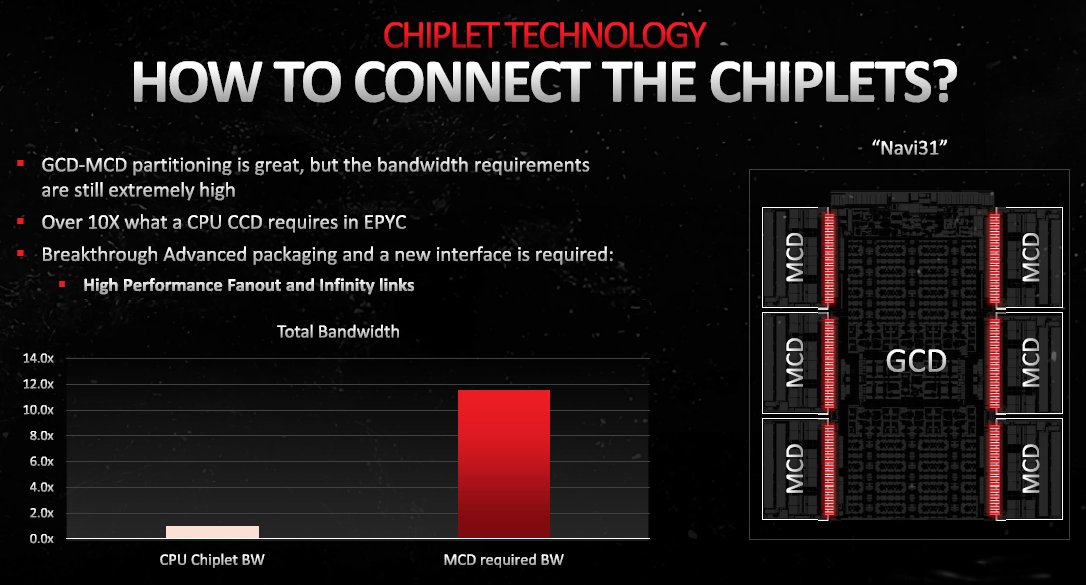 However, AMD realized that even when tinkering with the Navi 21 RDNA 2 GPU architecture, inter-GPU shader engine communication requires a massive amount of connectivity that numbers tens of thousands of signals, plus much higher bandwidth needs than the processor cores on the EPYC and Ryzen CPUs.

The engineers had to come up with a brand-new interface and interconnect, which is the faster ever in the industry. Meet Infinity Links operating at 9.2Gb/s with high-performance fanout to enable an industry-leading 5.3TB/s chiplet interconnect bandwidth. 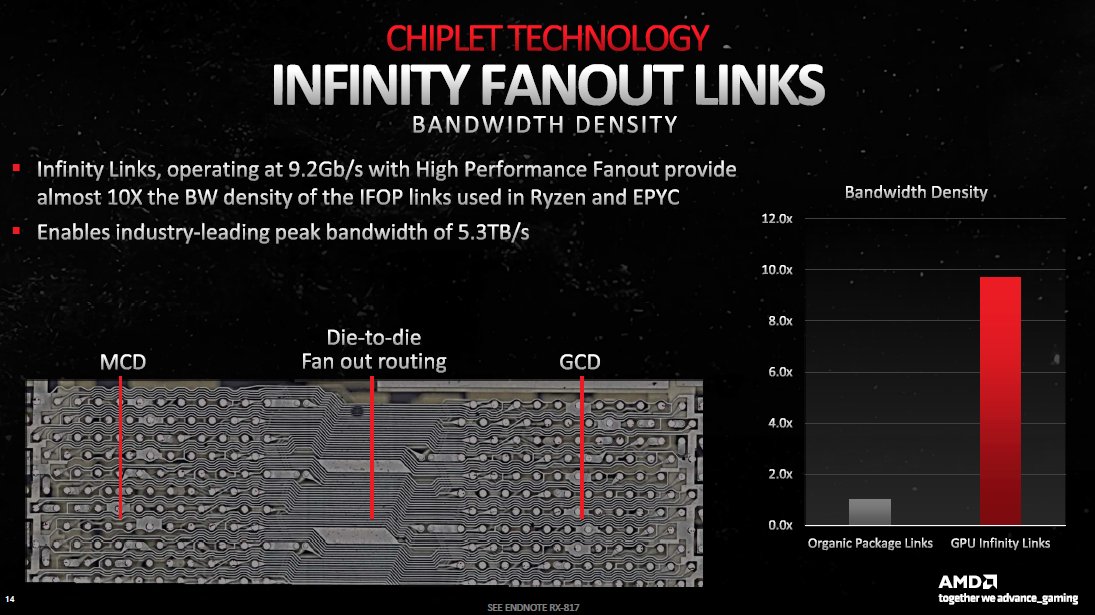 Undoubtedly, the Infinity Links are as crucial to the story as the chiplet architecture is for the GPU. They are engineered for low-voltage operation and support aggressive clock gating to conserve power. The result is that it's highly energy efficient, 80% per bit, relative to the organic package links used for the Infinity Fabric on AMD's CPU and only consumes a net total of 5% of the GPU's overall power consumption.

Engineering the card for practicality

The engineering and design choices don't stop at stuff deep under the hood; even the physical design of the product has been thoroughly thought about. For example, the power envelope of the card was key, and so was their design goal to make it as easily compatible with existing systems as possible. 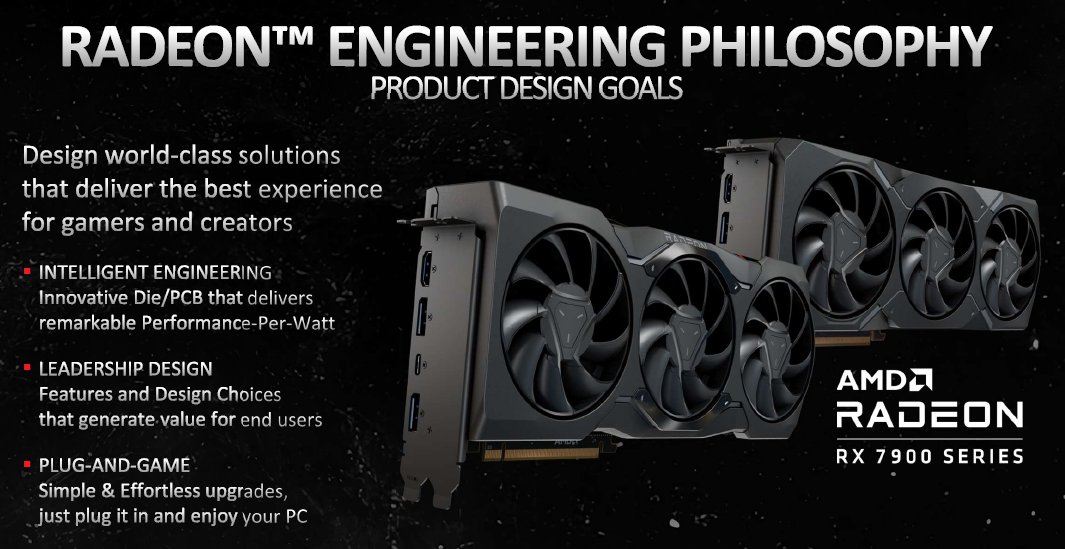 So while it might seem like AMD was purposely holding back after noticing the current debacle where some GeForce RTX 4090 owners were facing problems with the new 16-pin 12VHPWR (PCIe Gen 5) power connector, the Radeon RX 7900 series was on the drawing board more than a year before all this began.

Simply put, AMD designed the Radeon RX 7900 series to utilise the standard PCIe 8-pin power connector all along. With a total board power of 355W and 300W respectively for the Radeon RX 7900 XTX and 7900 XT edition, AMD says that you will only likely need a standard 800W or 750W PSU accordingly to get it running smoothly with the rest of your system. This is pretty much what anyone with a high-power graphics card in the last few years would be decked with, so it's unlikely one will need a new PSU, unless they're upgrading from a much lower-tier graphics horsepower.

That said, we'll let the images and slide shots from AMD do the talking, as there are a lot of finer points, but they are quite clearly captured here on the refinements done over the predecessor:- 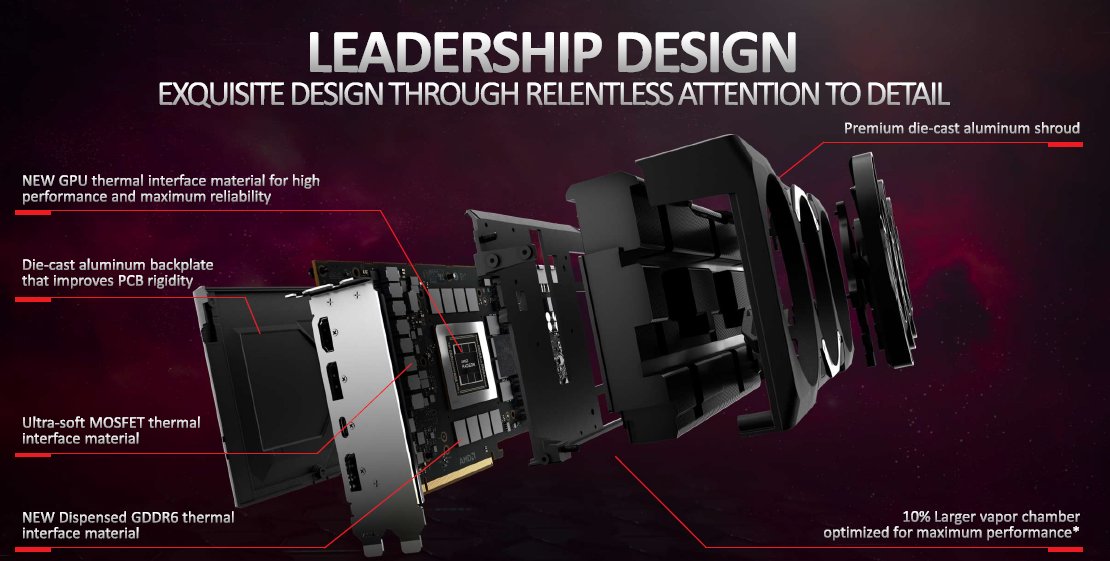 You'll note that the overall design hasn't changed much from the Radeon RX 6900 and 6800 series, but enhanced with a number of small updates. After all, if the total board power of the newcomers isn't much different from the predecessors, there's no real need to shake things up. Plus, they've kept their cards more compact than the competition they are aiming at:- 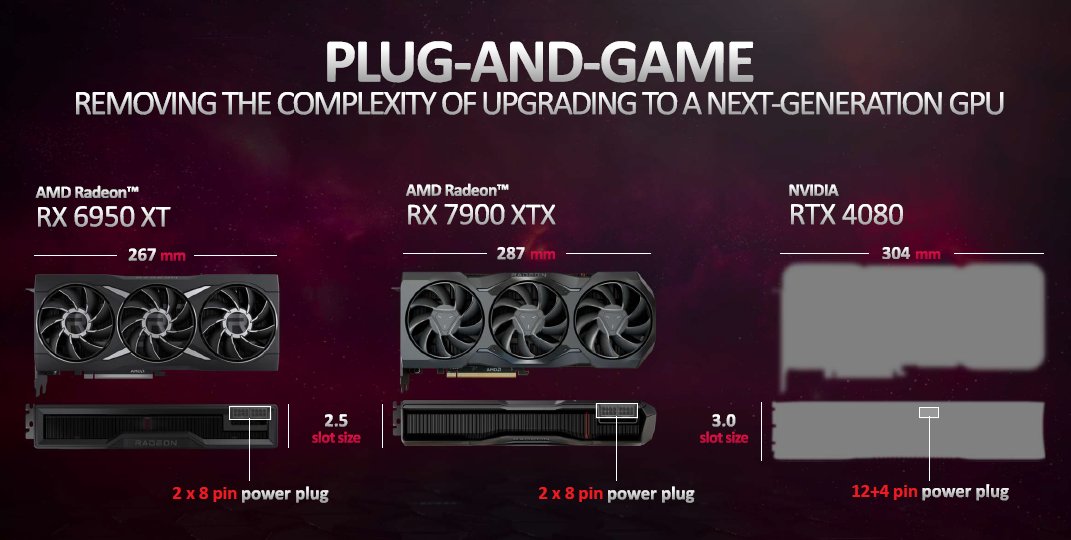 Here are our close-up photos of AMD's flagship Radeon RX 7900 XTX in person:- 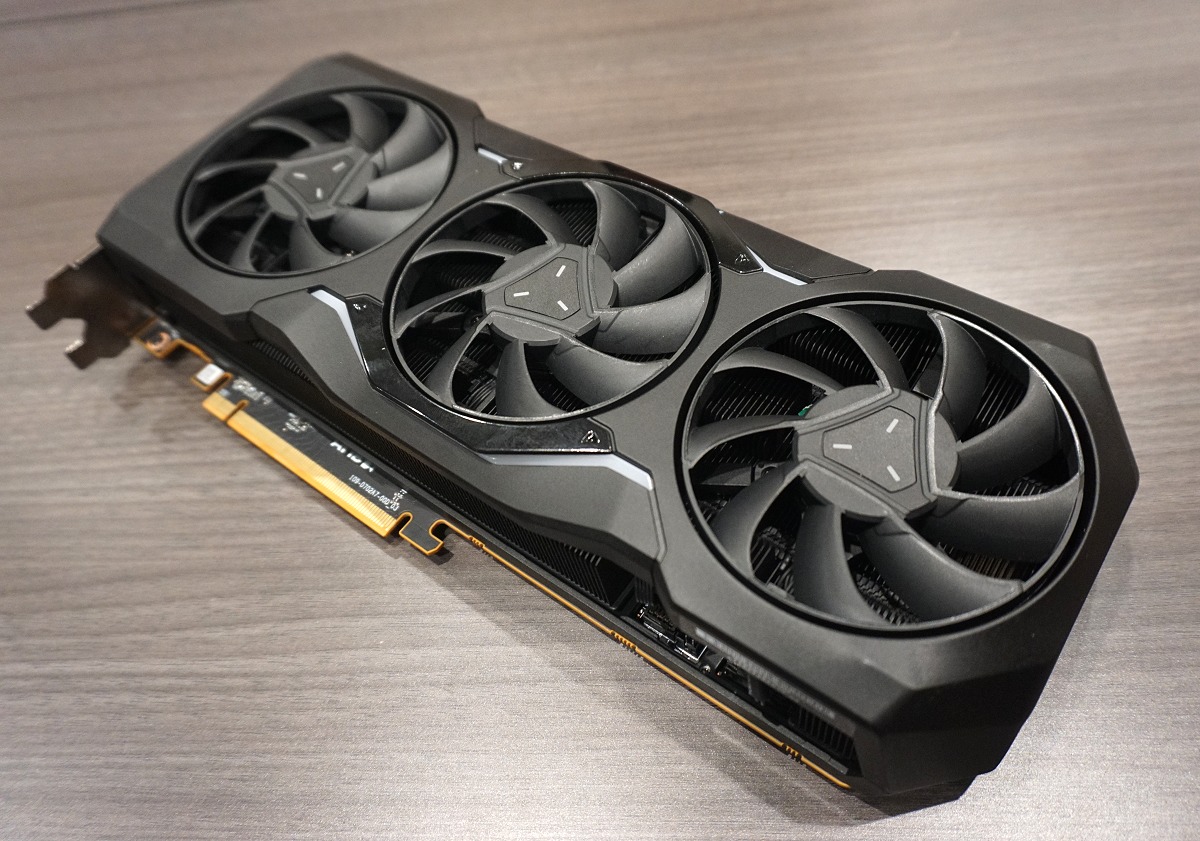 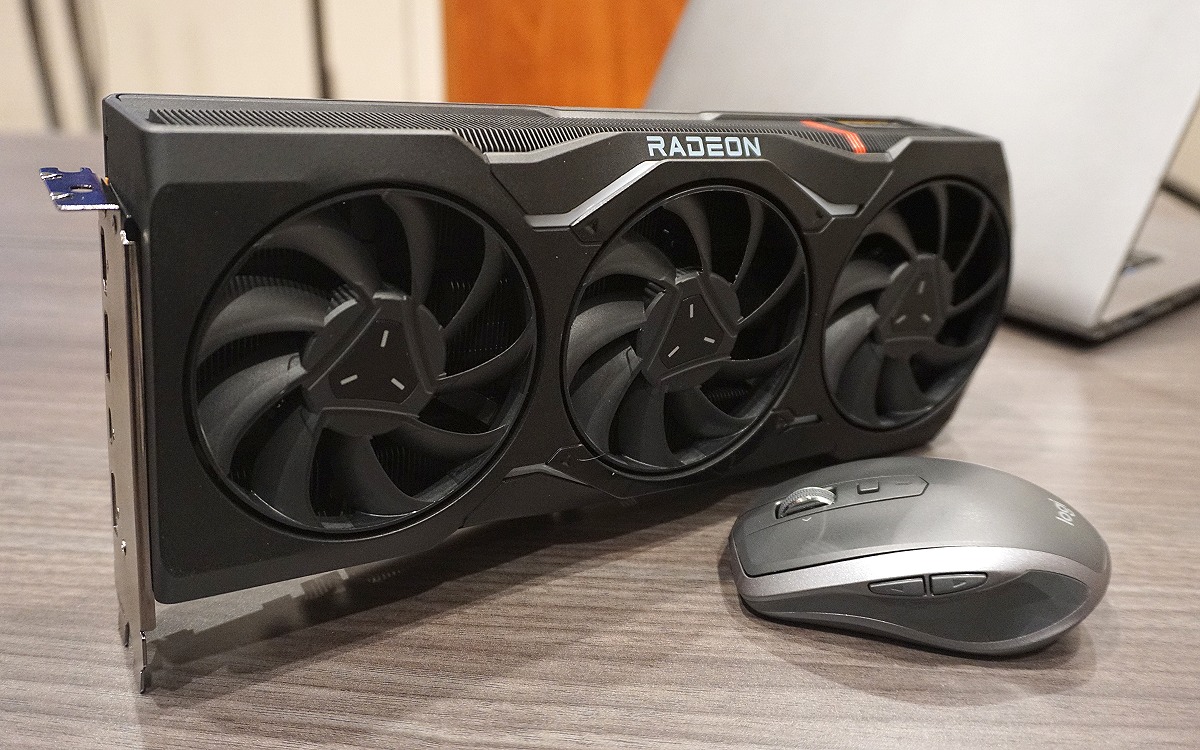 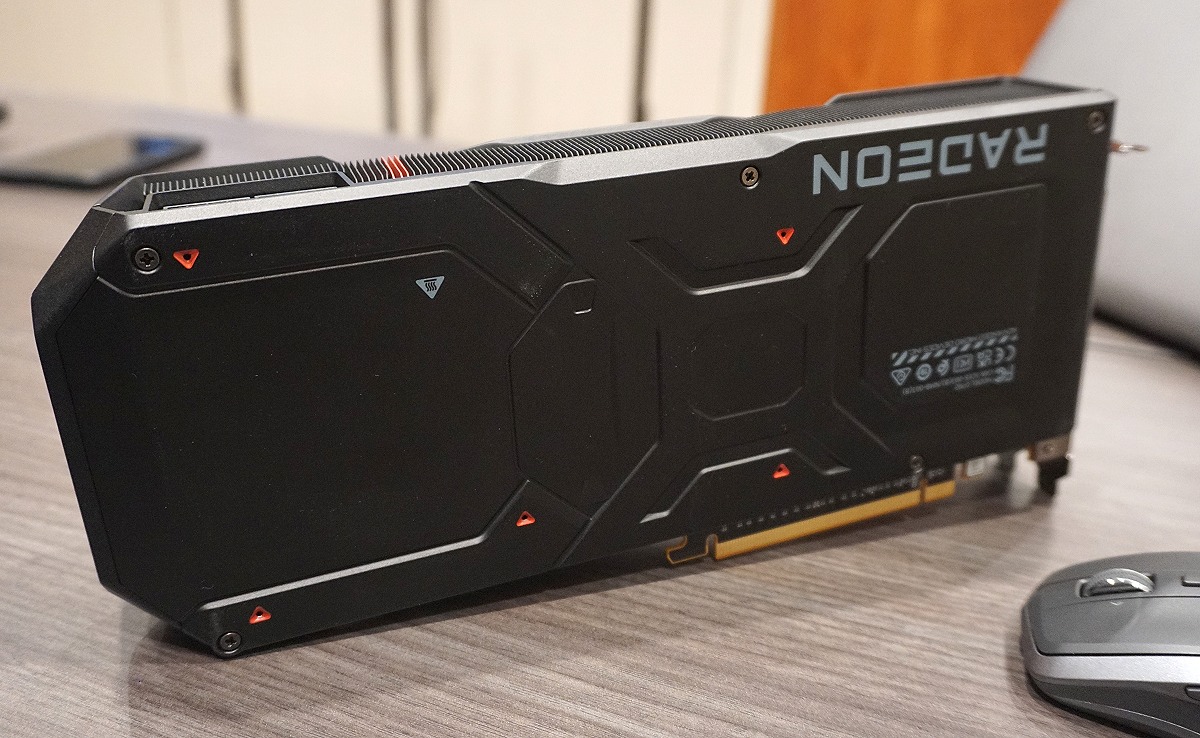 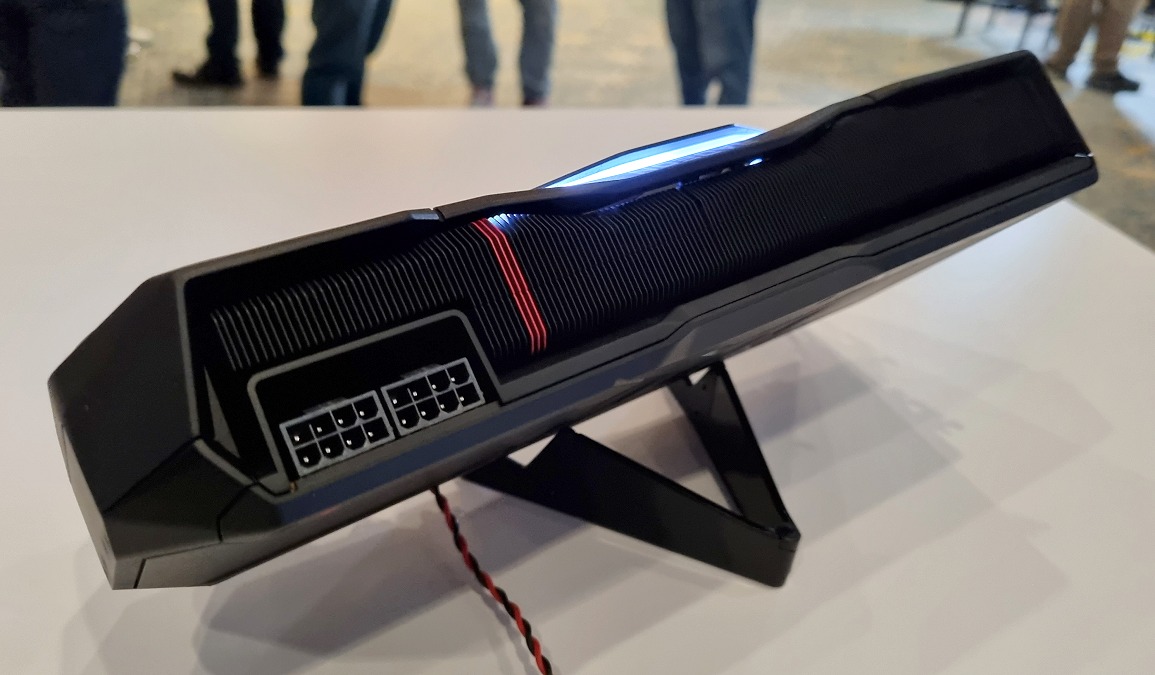 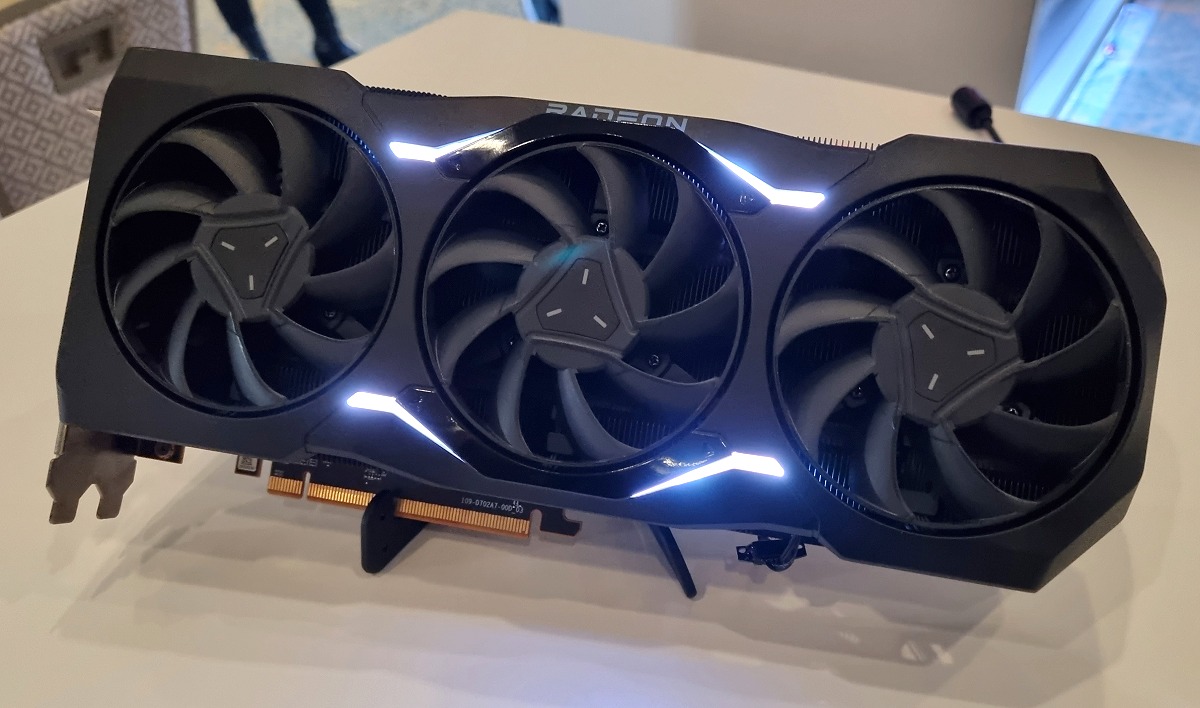 The new Radeon RX 7900 series will also be the first-ever enthusiast graphics card to support DisplayPort 2.1 standard, which is a big leap over anything else in the market that only still support DisplayPort 1.4. Adding to that, the new graphics cards will have a total of two dedicated DP 2.1 ports, with a USB Type-C port that also has DP 2.1 support via DisplayPort Alternate mode, and an HDMI 2.1 port. Pretty radical, considering this will be the first such card to support such a specification. 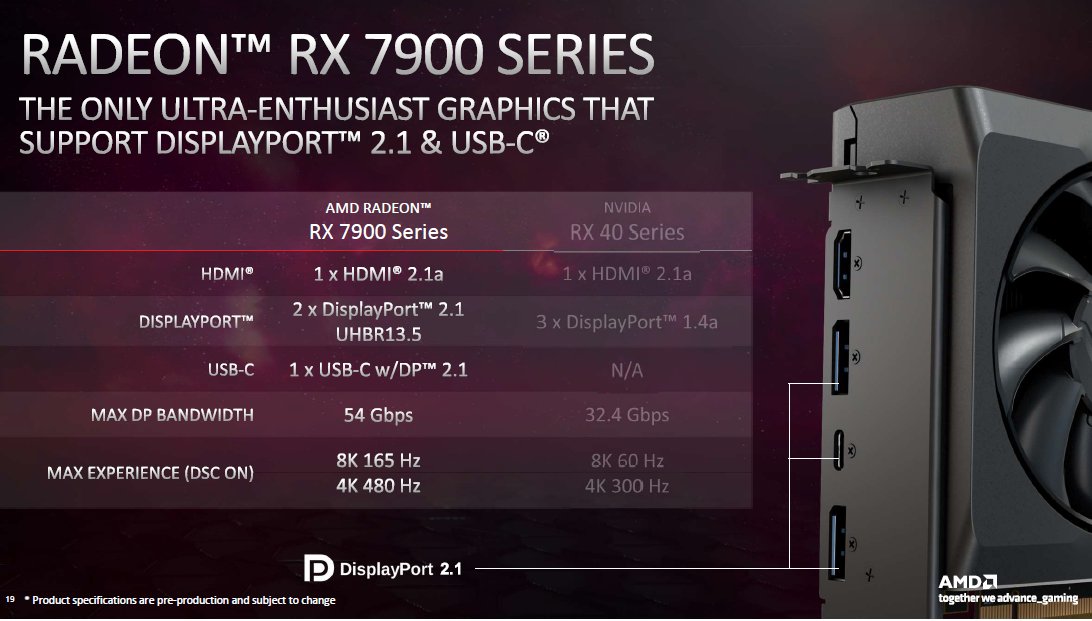 So, what do you actually gain out of a card that supports DP 2.1? Far higher refresh rates and resolutions for next-gen display experiences. Think 480Hz at 4K resolutions are even 165Hz at 8K resolution. However, this spec is more forward-looking than being immediately useful as there aren't any screens that support such a standard - yet. We hear that CES 2023 will be where display makers such as ASUS, Acer, Dell, LG and Samsung will show off their top-of-the-line screens with crazy new capabilities thanks to DP 2.1 support. 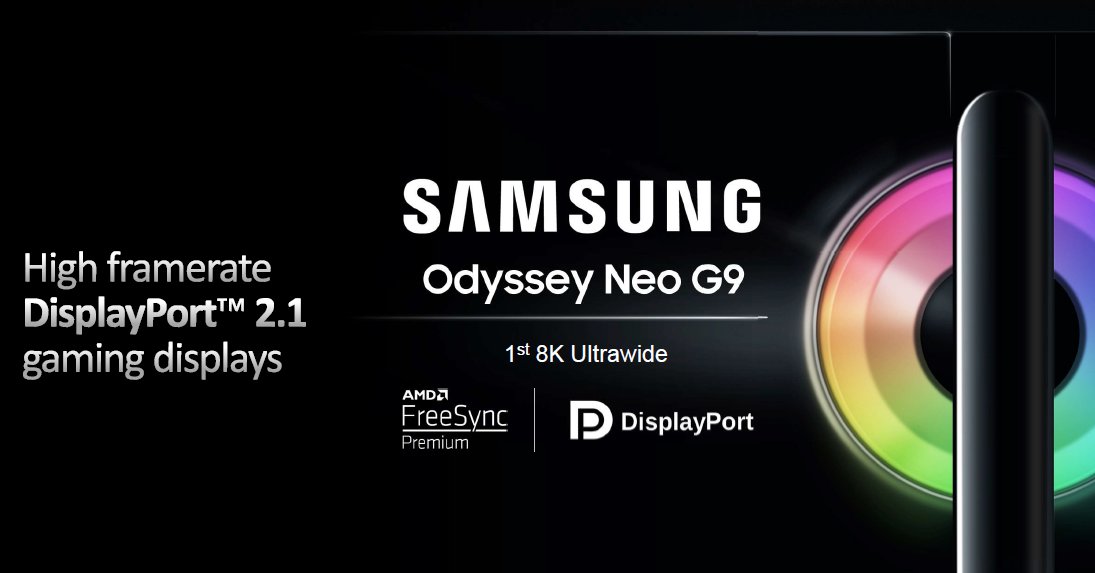 DP 2.1 is basically a slightly updated standard from the more important DisplayPort 2.0 spec with official support for DP40 and DP80 cables, along with improved USB 4.0 Type-C spec support. The most important aspect is Ultra-High Bit Rate (UHBR) transmission modes that DP 2.0 debuted. There are three transmission modes:-

With a total of four lanes within the DisplayPort connection, the total bandwidth supported is 40Gbps, 54Gbps and 80Gbps, respectively. The Radeon RX 7900 series have implemented DisplayPort 2.1 via UHBR 13.5 implementation, thus giving their DP 2.1 ports a maximum display bandwidth of 54Gbps to support the crazy throughput required to support ultra-high refresh rates at 4K and 8K resolutions while gaming. Roughly what kind of performance can you expect since there are so much more pixels to crunch and at faster clocks? The below performance data is compiled by AMD to give you an idea, but it also alludes to the capability of the Radeon RX 7900 XTX with FidelityFX Super Resolution (FSR) to give it the necessary boost. 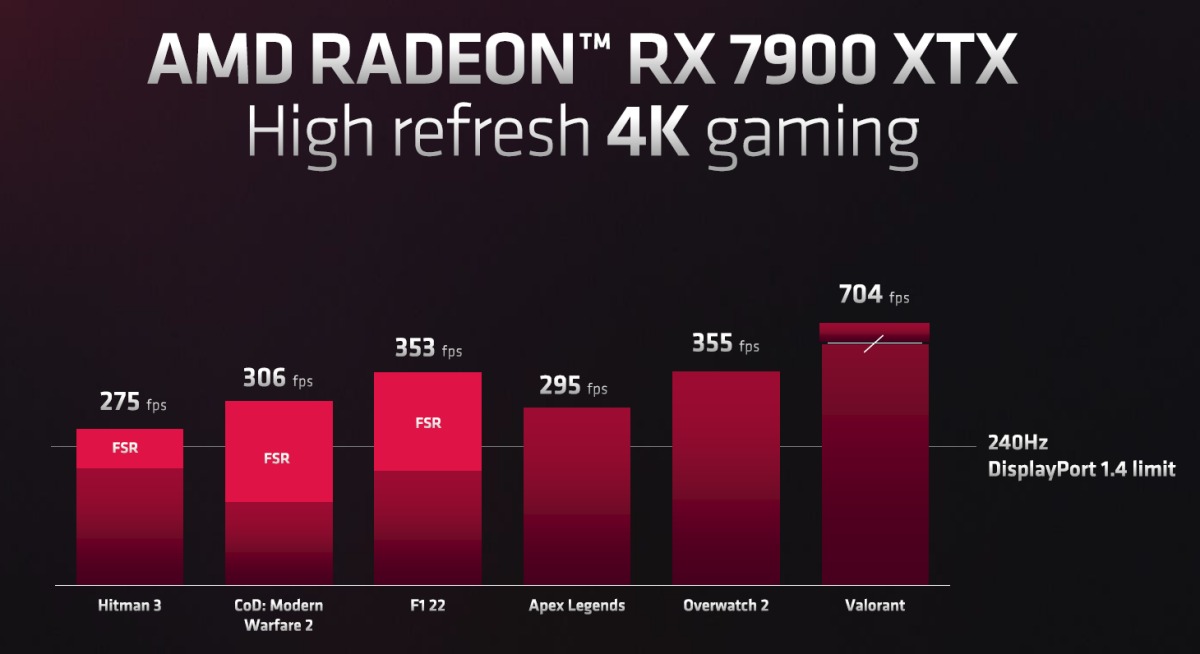 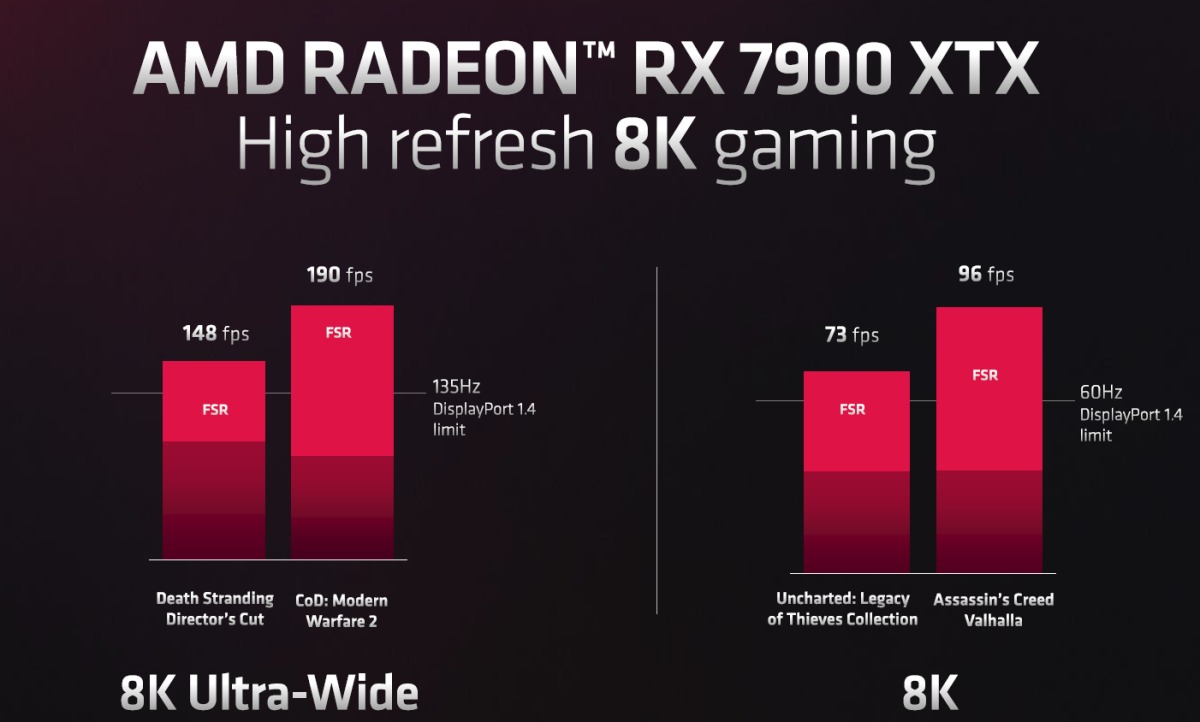 When can you experience the next-gen AMD gaming experience?

So all this sounds promising, and RDNA 3 could be the real deal we've been expecting from AMD. When can we actually see any real-world performance from actual in-house testing? Stay tuned as that's likely going to be closer to the actual availability of the Radeon RX 7900 series that's slated for availability on13th December 2022.