For comparison cards, we went with the PowerColor Radeon RX 480 Red Devil to see how much performance has improved over the last generation, and the Aorus Radeon RX 570 4G to gauge how much more performance the flagship Polaris card will get you.

Next up, here’s a list of all the benchmarks used:

We used the Fire Strike Extreme benchmark and stress test in 3DMark (2013) for our temperature  and power consumption tests respectively.

Unsurprisingly, the Radeon RX 580 was only quicker than the RX 480 by around 11 per cent. That’s not too paltry an amount, but it still isn't enough to justify an upgrade from the perceived model number upgrade. That said, the Radeon RX 580 managed to edge out the GeForce GTX 1060 in the majority of the 3DMark benchmarks, although the difference was mostly limited to just a few percentage points. VRMark is a relatively new benchmark used to assess whether a certain hardware configuration is ready for high-end headsets like the Oculus Rift and HTC Vive. Scores are derived from the average FPS, where the passing frame rate is 109. We’ve included a separate graph with the raw FPS figures as well to help make better sense of the VRMark scores.

All the cards here passed the test, which means they’re ready for high-end VR headsets, but the Radeon RX 580 once again topped the GeForce GTX 1060 here. That could be due to its higher memory bandwidth as VR content can be very memory intensive, but we should point out that the difference is actually rather inconsequential, in the ballpark of just 3 per cent. In Shadow of Mordor, we see the Radeon RX 580 inching ahead of its NVIDIA counterpart again, although the GeForce GTX 1060 did gain the upperhand in the 4K benchmark. Having said that, the differences are so small that for all practical purposes, both cards are essentially neck-and-neck here.

You do see what performance advantages you’re getting by opting for the RX 580 over the RX 570 though, and the former was roughly 20 per cent quicker at 1440p. The latest title in the Deus Ex franchise is probably one of the most demanding games you can run right now. Based on the Dawn engine, it features just about every trick to make your game look pretty, including things like volumetric and dynamic lighting, screenspace reflections, and cloth physics.

Happily enough, today’s top mainstream cards are more than up to the task of handling any game at 1080p, and both the Radeon RX 580 and GeForce GTX 1060 do reasonably well at a FHD resolution on both High and Ultra settings. However, the performance gap between the two was slightly larger here, with the Radeon RX 580 coming in at roughly 8 per cent faster at 1080p.

That said, both cards began to struggle once the resolution ramped up to 1440p, and they both took a huge performance hit. At above 40fps, things are still reasonably playable, but here’s where Mankind Divided really begins to test the cards.

Things then plummet into unplayable territory when you try to run the game at 4K, and that’s probably where you’d want to draw the line. The Division uses Ubisoft’s own Snowdrop engine, and the game gives the lead to the Radeon RX 580 as well, where it was approximately 8 per cent quicker than the GeForce GTX 1060 at 1440p (DirectX 11). However, it seemed like the AMD card benefited a lot more from the move to DirectX 12 here, and the performance gap between the two widened to around 15 per cent.

The Radeon RX 480 even comes perilously close to the GeForce GTX 1060 in DirectX 12, so AMD has the clear upper-hand here. 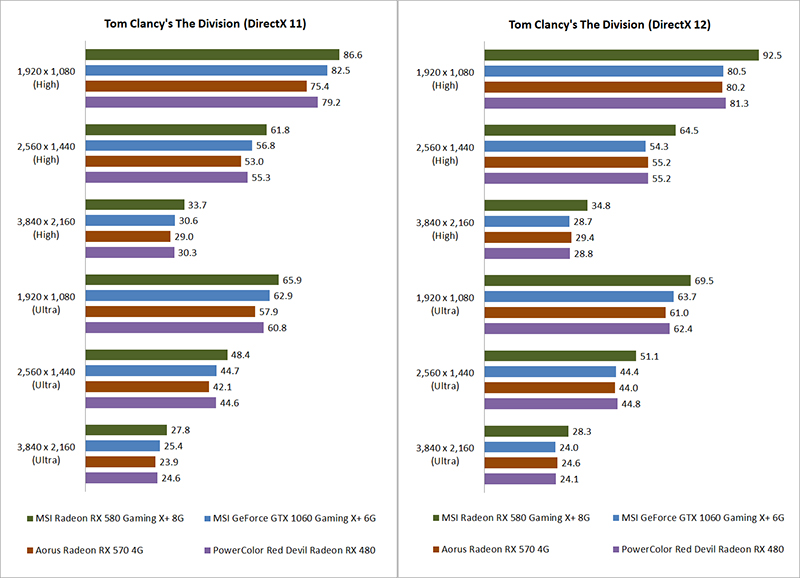 Ashes of the Singularity has long been the poster child for the performance benefits a low-level API like DirectX 12 can bring. It is based on the Nitrous engine and can be extremely punishing thanks to the huge number of onscreen units and the sheer level of detail accorded to each unit. This means it requires a high number of draw calls, which is exactly what DirectX 12 is supposed to handle more efficiently.

In the DirectX 11 benchmarks, the GeForce GTX 1060 came ahead of the Radeon RX 580 for the first time, where it was up to 22 per cent faster at 1080p and High settings. However, its lead shrunk as the display resolution and game settings became more demanding.

But after switching over to DirectX 12, both cards were virtually tied, and they traded blows demanding on the graphics settings and resolution. There was hardly a clear winner here and they were always within a frame or two of each other. Hitman is one of the more forgiving games in our benchmark suite, and the Radeon RX 580 and GeForce GTX 1060 were more than capable of handling the game at pretty much any resolution. Even at 4K and Ultra settings, the game is still relatively playable, although you won’t get a butter-smooth experience.

That said, the edge went to the Radeon RX 580 again, although the gap was once again restricted to just a handful of frames.