The extra 4GB of video memory doesn't do the Radeon RX 5500 XT 8GB much good in a synthetic benchmark like 3DMark. In fact, there's hardly any significant difference between the 4GB and 8GB versions of the card. Both cards ended up performing around the level of the NVIDIA GeForce GTX 1660, although the NVIDIA card had the edge in the Time Spy tests. 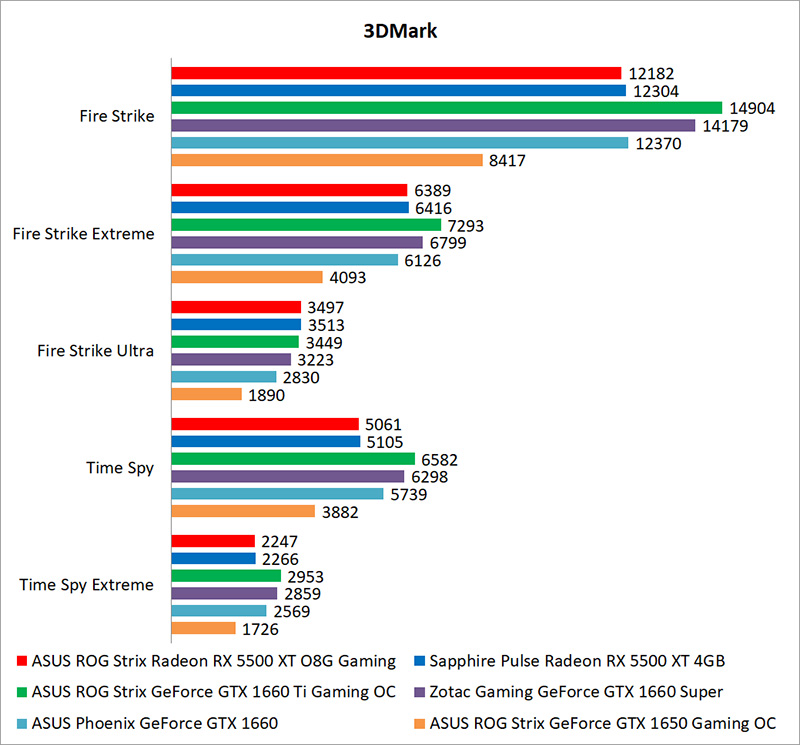 Once again, the 8GB model was practically indistinguishable from its 4GB counterpart. The performance difference will only become apparent when a game demands more VRAM resources with more complex textures and higher resolutions, and it seems like Escalation is not that game. That said, we do see the 8GB version inch ahead at Crazy settings and a 4K resolution. When compared to the NVIDIA GeForce GTX 1660, the Radeon RX 5500 XT 8GB was around 11 per cent slower at 1080p and High settings. 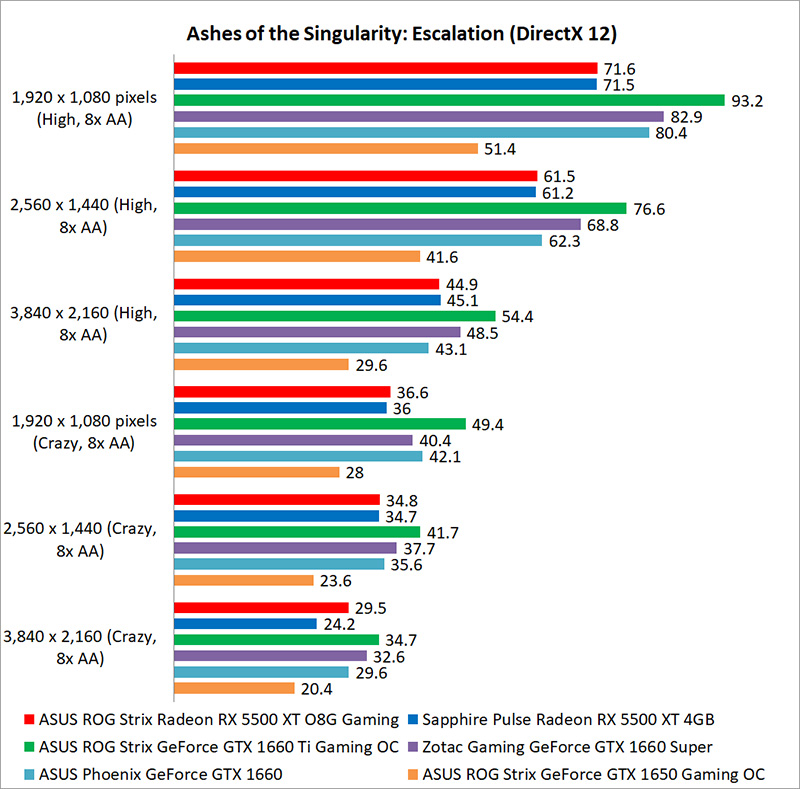 That said, Mankind Divided doesn't do a lot to bring out the benefits of the extra memory either. At 1080p and Ultra settings, both versions of the Radeon RX 5500 XT pull nearly level with the GeForce GTX 1660. 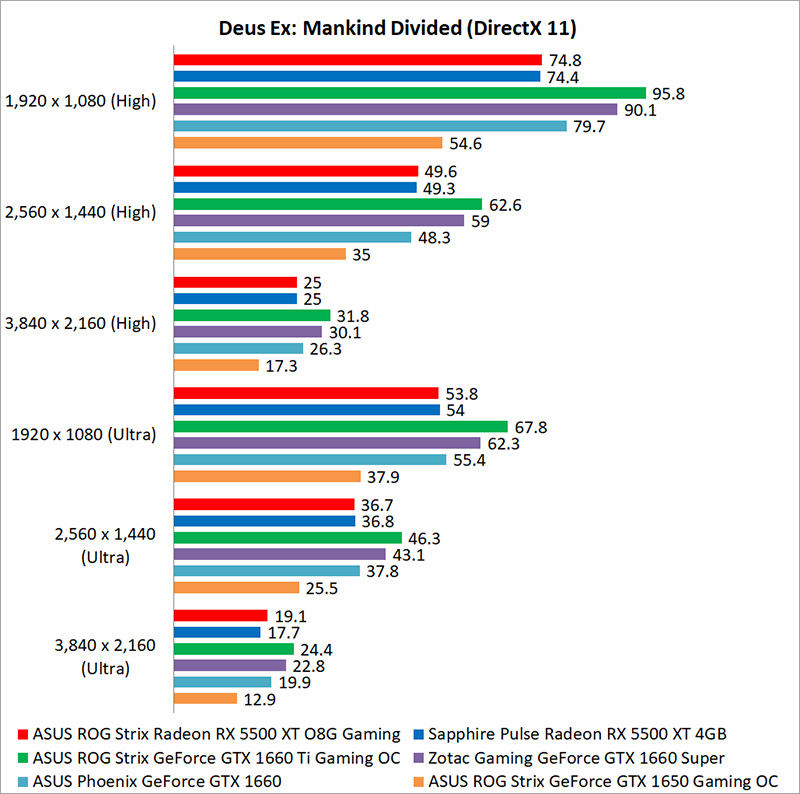 Far Cry 5 is actually an AMD launch title, so it'll be interesting to see how the red camp fares here.

The Radeon RX 5500 XT 8GB does pull ahead of its 4GB sibling at 4K, but with average frame rates still hovering around 30FPS, it's almost an inconsequential difference since 4K gaming is totally out of this card's league. However, both cards continue to push out very similar numbers as the GeForce GTX 1660. 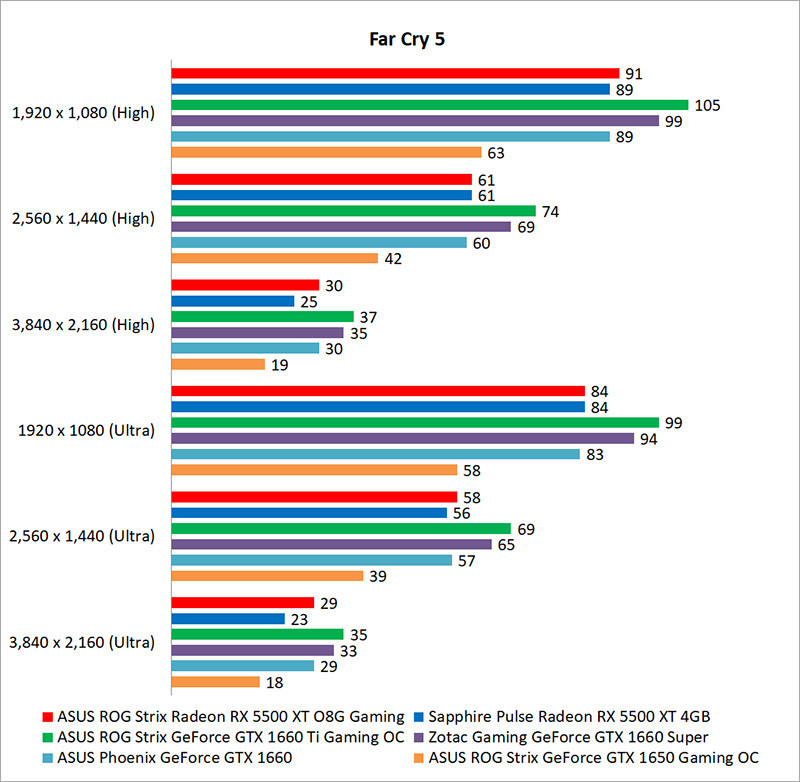 This is also an NVIDIA game through and through, with options to turn on PhysX and HairWorks. However, these have been disabled to enable a more level playing field with AMD cards, as have options for ray tracing and DLSS.

This is also a very demanding game to run, but the Radeon RX 5500 XT 4GB and 8GB look capable of handling it at 1080p and High settings. That said, that's about as far as the cards can go and it doesn't seem the best idea to push the settings or resolution higher. The 8GB version of the card also isn't any faster than its 4GB counterpart here. 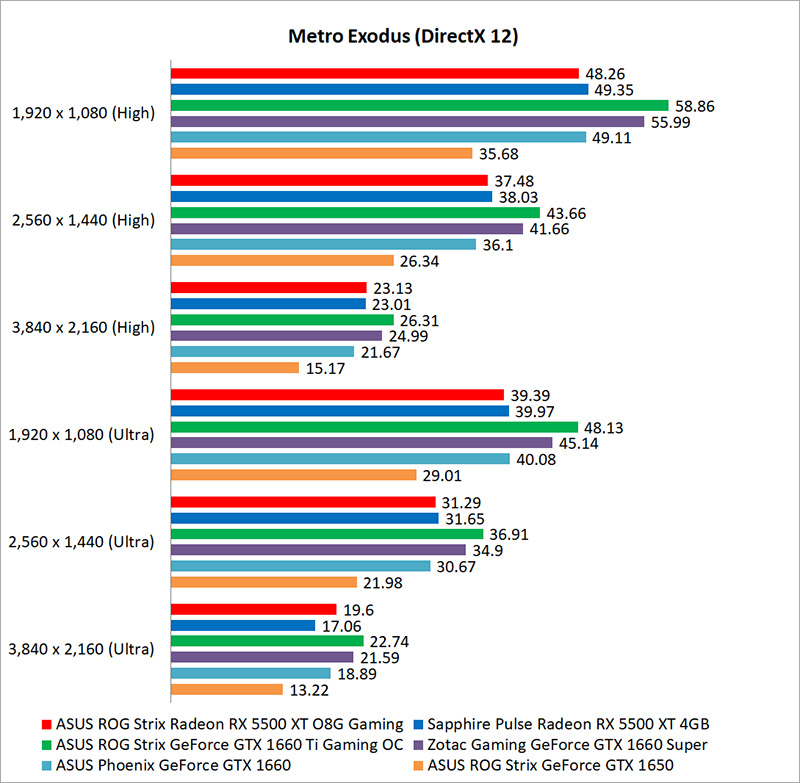 By this point, it's apparent that doubling the amount of VRAM doesn't help a lot with performance in most cases. After all, the GeForce GTX 1660 Super has 6GB of GDDR6 memory, but is still around 20 per cent faster than the Radeon RX 5500 XT 8GB. 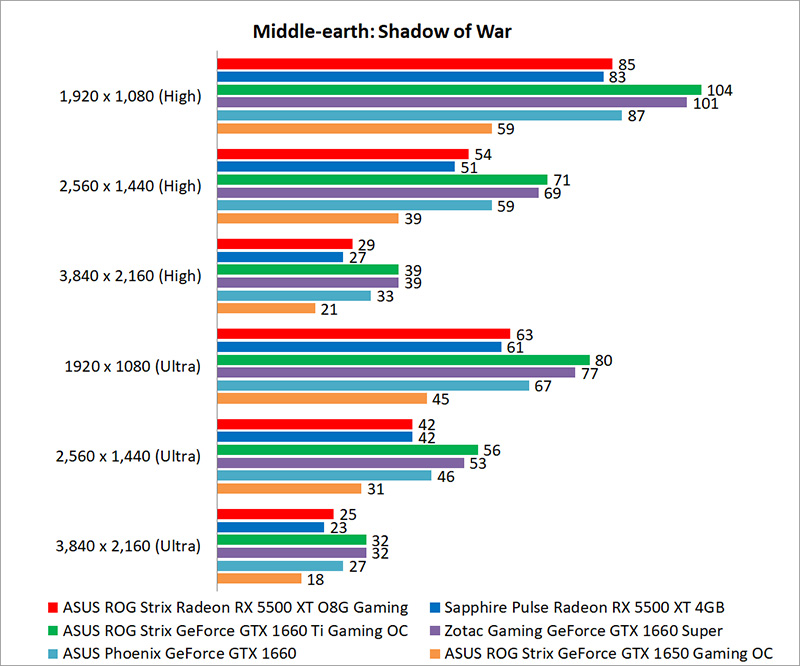 Shadow of the Tomb Raider is one of the games where the extra 4GB of memory seems to come in handy. At 1080p and the Highest settings, the 8GB model was around 9 per cent faster than the 4GB card. The 4GB model also falls behind the GeForce GTX 1660 here, coming in at roughly 15 per cent slower. 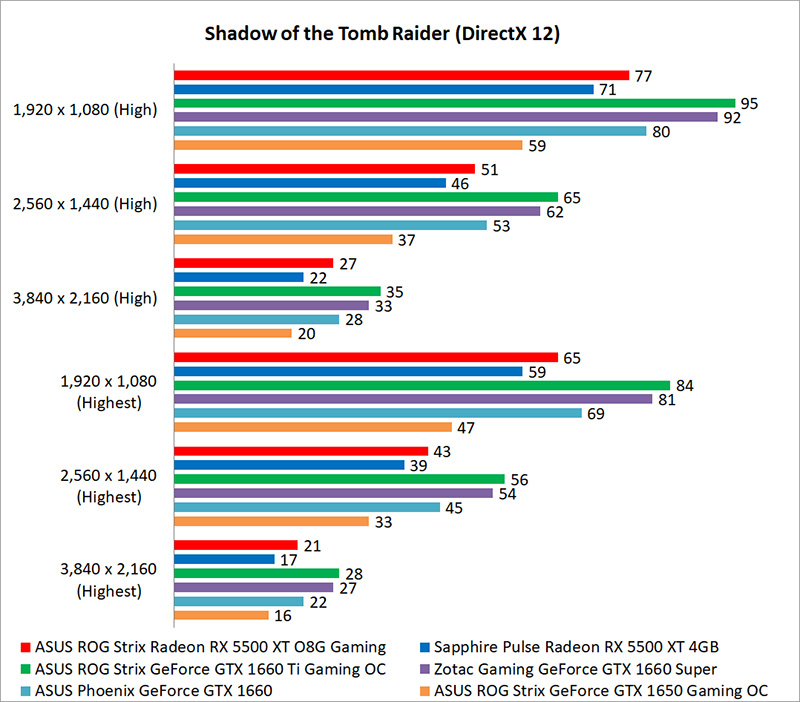 The additional VRAM comes into play to some extent in The Division 2 as well. At 1080p and High settings, the Radeon RX 5500 XT 8GB was around 5 per cent faster. The difference was even more pronounced at 4K and Ultra settings, where the 8GB card was a good 58 per cent faster. However, it's still nowhere close to delivering a playable experience at 4K, so the performance boost doesn't have any tangible impact on real-world usage. 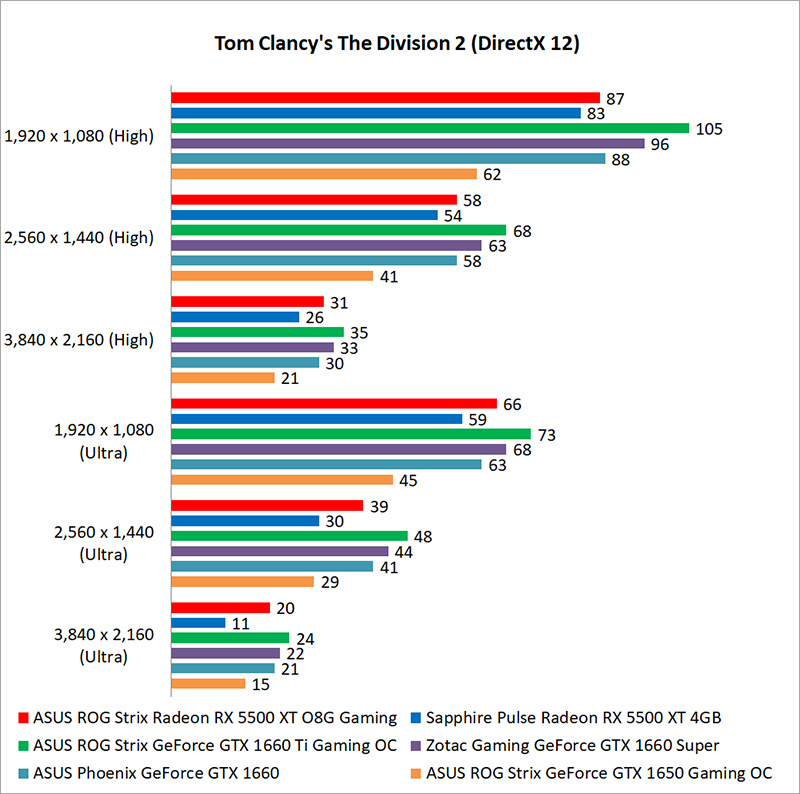