The Radeon HD 7970 runs at the second highest temperature of 72.0°C while its younger brother runs cooler at 61.0°C. Measurements were taken while benchmarking. Also, do bear in mind that all the cards tested have stock cooling options, we should see their operating temperatures heading south as manufacturers roll out cards with their own specialized coolers. 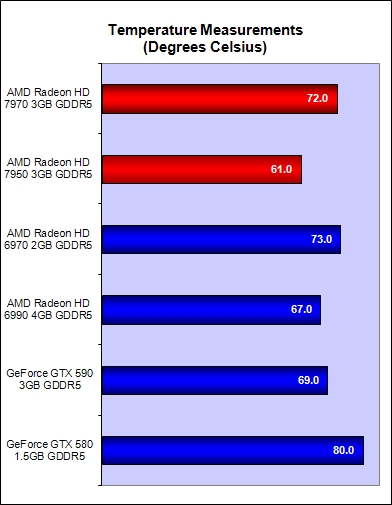 The power consumption of the new cards are the lowest compared to the rest of the cards, regardless whether they were measured when the cards were idle or on load. The dual-GPU monsters are power hungry entities while the energy efficiency of the new GCN architecture shines through in this test when you factor in that they are probably just 30 to 40% slower than the tested dual-GPU models. It's also much more power efficient than the HD 6970 and the GTX 580. 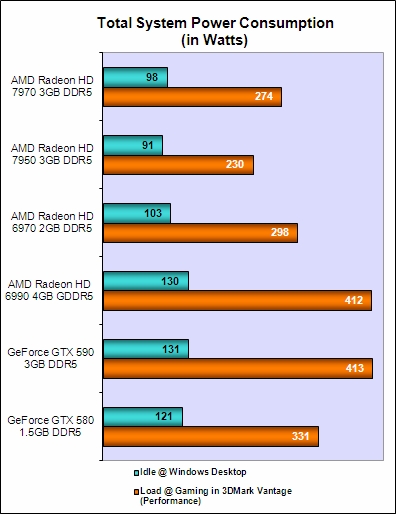 For Radeon HD 7970, its performance improved by almost 16% when it was overclocked, its GPU Core was pushed to its maximum limit of 1125MHz (925MHz was its default clock speed) while its memory clock was pushed to its limit of 6300MHz from its default value of 5500MHz. The Radeon HD 7950 was overclocked to 1100MHz from its default clock speed of 800MHz for its GPU Core clock speed while its memory clock speed was pushed to its maximum of 6300MHz (default value of 5000MHz). Its performance improved by approximately 22.5%. So far, the numbers look rather favorable for overclocking but as usual always apply caution when embarking on extreme overclocking, which we feel these cards can manage when carefully tackled. 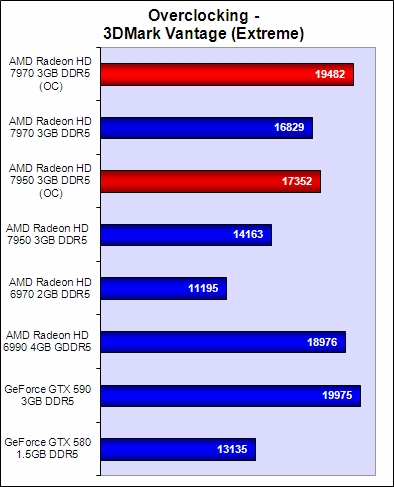