It would seem like we've committed a treasonous act by not updating our testbed to a motherboard that has support for PCIe Gen 3.0. However, in order to maintain the integrity of the data we have painstakingly accrued over time, we have decided to withhold the graphics testbed upgrade until Intel is official in its chipset support for PCIe Gen 3.0. In any case, our decade-old history of testing graphics cards have revealed little to no gain when new graphics cards are first to support a brand new interface version, be it PCI, AGP or PCIe. As such, we can safely say that's probably the least of our concerns at this point of time. What needs to be tackled is the price point for these new cards which we'll soon touch upon.

With the dissection of the inner workings and features of the Radeon HD 7900 cards, it's easy to tell that AMD is targeting NVIDIA's top GeForce GTX 580 single GPU offering with the Radeon HD 7950. From our benchmarks, the Radeon HD 7950 had its fair share of wins and losses against its NVIDIA counterpart in terms of benchmarking performance, but it was generally favorable. As we take a closer look at the other measurements in terms of its power consumption and operating temperature, it seems that we have a clear winner as Radeon HD 7950 takes the lead from GeForce GTX 580. Even the higher rated Radeon HD 7970 easily outperformed the NVIDIA camp in this lineup and sometimes it wasn't very far off from some of the dual-GPU graphics cards. Overall, we are impressed with the performance of Radeon HD 7970 as it consistently scored well, ahead of the GeForce GTX 580, but not as speedy as the last generation dual-GPU graphics cards. 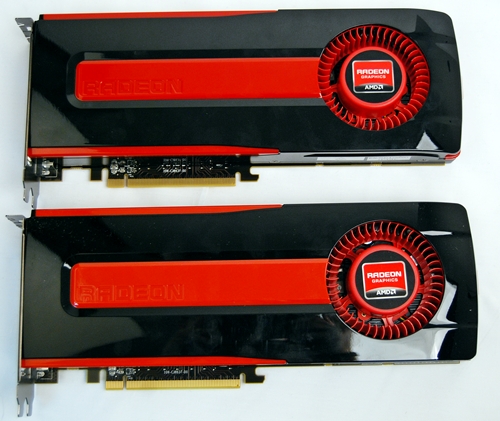 The overclocking potential of the Southern Island cards are also commendable as we were able to push the cards to the limit with Radeon HD 7950, with its overclocked GPU core rated at 1100MHz, just 25MHz short of the maximum rate of 1125MHz. From our time with the reference cards, we believe that there is more overclocking potential for them as we see slowly begin to see further variants with customized coolers as well as tweaking software to assist in over-volting these cards and push them further.

In terms of the pricing of the card, AMD has aimed the Radeon HD 7950 squarely at the fastest single-GPU offering from NVIDIA, i.e., GeForce GTX 580. This NVIDIA part currently retails at about ~S$750 which makes the Radeon HD 7950 competitively priced as it retails at a similar price point or less. Factor in multi-monitor gaming possible via EyeFinity 2.0 on just a single GPU (unlike the GTX 580) and it seems like the deal is sealed if you're looking for a top-tier GPU. What's not to like? Probably the lack of a full 3D solution such as the NVIDIA 3D Vision kit. If you really dig that option, regardless of the fact that AMD can support 3D gaming, the problem is getting the glasses and middleware for them. This is where NVIDIA still retains the lead in this niche market.

Its elder brother retails at about S$850 which makes it ideal for bragging rights as it is the first 28nm GPU with a spanking new AMD GCN graphics architecture. It's however hardly 'affordable' even for those with deep pockets because for S$950 to S$1000, you can grab the very best the market has to offer such as the GeForce GTX 590 or the Radeon HD 6990 dual-GPU graphics cards. This is the reason why many are making a din in the online space of AMD's steep pricing, but let's face it - AMD has to charge a premium when it can afford to do so. In this case, it has a reason to charge premium given its performance and pole-position for a single GPU graphics card. If not for its price, we feel that the Radeon HD 7970 is a good product on its own and in time to come, it will be more competitively priced. Check out the retail pricing of these graphics cards updated weekly by our team.

Currently, it seems that AMD has the upper hand but with the impending launch of NVIDIA's first 28nm GPU, the GK107 in April, it remains to be seen if AMD will lose its first-to-market advantage in the graphics arena.