The 3DMark 11 benchmarking utility makes use of the various DirectX 11 functions such as tessellation and DirectCompute to put the GPUs through their paces. Both the cards from the Southern Islands pulled ahead of their Northern Island brethen by quite a margin. The Radeon HD 7970 for example, was about 45% speedier than the Radeon HD 6970 in this synthetic benchmark. Up against the the previous fastest single-GPU card, the NVIDIA GeForce GTX 580, it was close to 30% ahead.

The Radeon HD 7950 however, wasn't as pronounced in its wins as it garnered a lead of about 20% and 7% in the respective comparisons against the HD 6970 and the GTX 580. Both the newercomers were only outclassed by the dual-GPU cards from both AMD and NVIDIA, i.e., Radeon HD 6990 and GeForce GTX 590 which still held a 25% speed advantage. 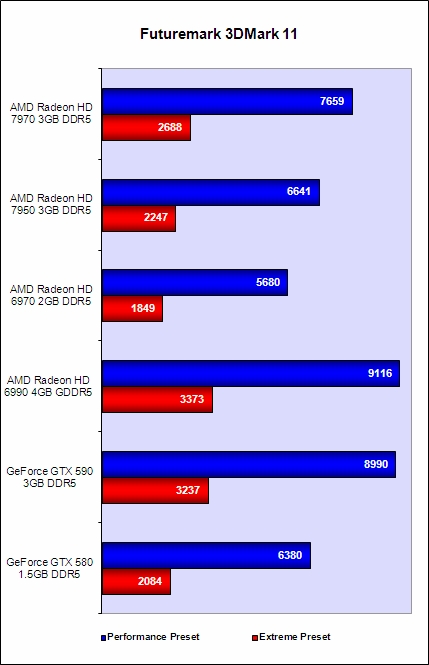 For 3DMark Vantage, Radeon HD 7970 and 7950 prove their mettle again; only to be bested by those hardcore dual-GPU monster cards! In terms of hard numbers, the Radeon HD 7970 bested its predecessor HD 6970 by over 50% and about 28% when contrasted with the GTX 580. The dual-GPU monster cards from AMD and NVIDIA still held an upper hand of 12% and 18% respectively over the Radeon HD 7970 in the most extreme settings. It doesn't sound like a big advantage for the dual-GPU cards anymore, but we'll find out later if this holds in the game tests. 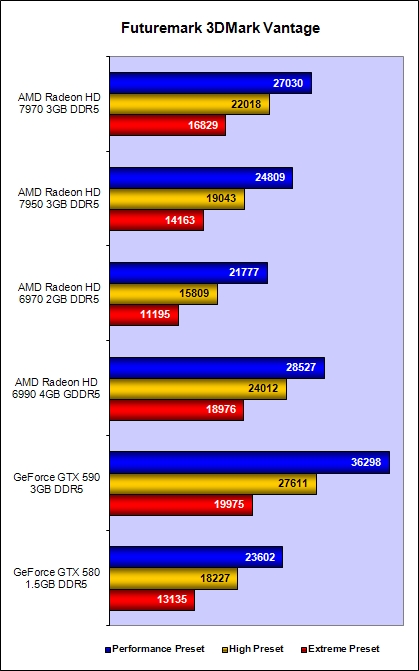