The two major chip manufacturers, AMD and NVIDIA are consistently revising their GPU architectures; hence, the introduction of a new one can be considered a momentous event and AMD is first off the blocks this time round to unveil GCN. 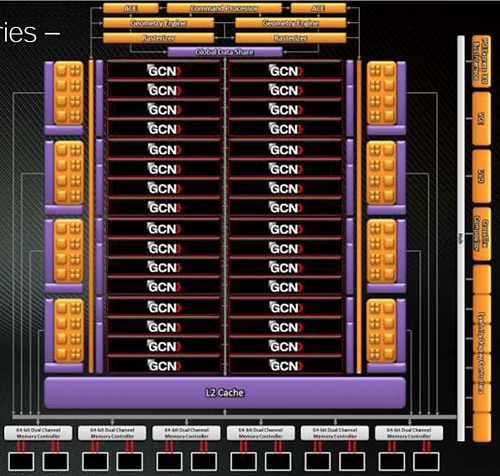 From the diagram above, we can picture a GPU, built with AMD's GCN architecture, to be made up of basic building blocks called GCN Compute Units.

Each GCN Compute Unit (CU) can be described as a processor with a scalar and  four vector units (each of which has 16 processing element)  that are built on a non-VLIW (Very Long Instruction Word) instruction-set architecture. According to AMD, the GCN CU is able to execute instructions with dependencies efficiently as its own hardware scheduler is able to assign instructions according to the various available computation units within the CU to avoid dependency bottlenecks. This allows the GPU as a whole to handle more instruction-sets per clock cycle.

In contrast, the Northern Island GPUs have its basic building blocks (VLIW4) based on VLIW instruction-set architecture. In return, these GPUs were not able to process instructions that have dependencies efficiently. This results in the graphics processors using up more clock cycles until the dependency issues were resolved. The VLIW architecture was suited for 3D processing; however, it could not handle the scalar processing requirements of generic computing applications efficiently.

AMD's departure from the Northern Island architecture can be seen as its efforts to introduce GPUs that strike a balance between 3D graphics and general purpose computing. AMD's GCN architecture is expected to handle a wider spectrum of compute workloads as AMD expands its GPU repertoire to target both graphics and professional computing requirements. Another important feature of the GCN architecture is its support for PCIe 3.0 x16 bus interface, making the AMD Radeon HD 7900 graphics cards one of the first PC components launched  that is compliant with this new standard.

In the end, these changes between the two Radeon HD 7900 SKUs aren't drastic and are the usual level of differentiation applied for getting out a slightly different SKU (or in other words, maximizing the produced GPU cores that probably can't meet the requirements to pass off as the 7970). For a casual observer looking over the reference card, the AMD Radeon HD 7950 looks almost the same as its elder brother. More on that on the following pages, but here's how the new AMD Radeon HD 7900 series stack up against its closest competitors.