As a mid-range card, the AMD Radeon HD 7870 is a strong performer, keeping up with and in a few cases able to match the performance of the high-end Radeon HD 7950 in many games. Of course, if you're planning on running higher resolutions with multiple monitors, or you really want to crank up the settings, the difference between the HD 7870 and HD 7950 will become more apparent. Still, at S$490 on average, the Radeon HD 7870 can be a reasonable alternative to the reference Radeon HD 7950 cards ranging between $20 to $70 more, thus providing a slightly more affordable price point without much loss in performance, especially for less demanding games or playing them at standard resolutions (below full HD).

However, we're not quite as convinced when it comes to the custom Radeon HD 7870 cards. The higher price that comes with a custom card erodes much of the value appeal of the HD 7870, and with some priced around the S$530+ mark (ASUS and HIS for example), it seems logical to just pay a bit more (or in the case of PowerColor's $518 Radeon HD 7950 model, you actually save some money) and opt for a reference Radon HD 7950 instead that has much better performance potential in more intensive games and quality settings. 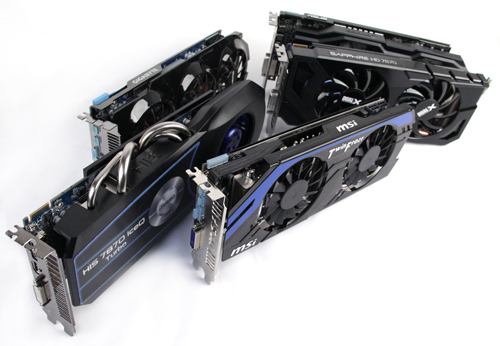 Having said that, we do expect prices for the HD 7870 to fall following AMD's price cuts overseas, but historically speaking, it will take a long while before those changes trickle down to the local market. When it does happen, expect to see pricing for the custom Radeon HD 7870 cards to be gradually readjusted as well, which might make some of them a better buy.

Before we get to the final ratings, here's a look at how we scored each of the custom cards' performance in the various categories (this doesn't yet factor the features and value ratings):

While ASUS' HD 7870 was a strong performer, its S$539 price tag makes it the most expensive model in this shootout, and we felt that at $50 more than the reference card, its performance gains didn't really justify the extra cost. More so when you consider that a Radeon HD 7950 is also available for a similar price point.

HIS was another solid performer, but again, its value score hurt its overall rating. At S$530, it didn't outperform the other cards by enough to warrant spending the extra money. We also thought that its cooler system was quite bulky, which could potentially cause problems with smaller cases and general handling as compared to the other cards.

We liked the build of MSI's Hawk model, and at S$519, it also provides reasonable, but not outstanding, value. It also scored well in our overclocking test, but was let down by lackluster temperature and power consumption ratings. Clearly the card is targeted at those who want to maximize its overclocking potential than for standard usage.

Best value goes to Sapphire, who has managed to price their HD 7870 option at S$485, which is slightly below the average reference model SRP (of S$490). This makes it a strong consideration where value for money is of concern as the card fared well generally. Special mention should also go to MSI's other HD 7870 Twin Frozr IV model (50MHz lower clock speed and without the GPU Reactor of the Hawk model) which, while not included in this shootout, is available for just  S$479 at the point of writing.

With the next powerful GPU SKU, the Radeon HS 7950, easily available in many variations from just around S$550, our advise would for an AMD card in this price segment would be to opt for a low cost Radeon HD 7870 or just top up  a little more for a beefier Radeon HD 7950. The price difference locally between the SKUs are just too narrow and don't follow that of the overseas markets. As a result, the custom edition Radeon HD 7870 cards are sandwiched in between and as seen in this shootout, aren't as competitive unfortunately.

Don't forget, NVIDIA will soon be releasing their mid-range GeForce GTX 660 series, which will add more competition at this price-point.